My plan was always to save the Grand Canyon for an epic trip – when I had time to plan it, time to fully process and prepare to hike down in it, or take a helicopter ride above it, or all of the above.

But once we realized that it was more or less in the direction in which we would have to travel to make our way through our unexpected road trip, the die was cast. How could we not go?

In fairness, I clearly hadn’t fully done my research before the trip – if I had realized how perfectly situated Flagstaff was between The Grand Canyon and The Petrified Forest, I would have always planned that city to have been our launching point for this trip. But in my mind, made up of memories left over from childhood road trips, nothing is near The Grand Canyon. In a memory that is most likely horrifically unfair to my parents, I remember driving 4 hours to see the Grand Canyon, looking over the edge for half a minute, eating a meal, and then driving 4 hours back.

(In reality, we apparently went to The Grand Canyon twice, but I definitely only remember one visit. The North Rim is in the middle of nowhere, but the South Rim is not. I think their visit to The South Rim must have been with their secret other children – there is no other explanation.)

So after driving north through Arizona after our trip to Saguaro, we decamped in Flagstaff for two nights – we’d spend a day at The Grand Canyon, then another night in Flagstaff, then head east to The Petrified Forest.

The drive to The Grand Canyon from Flagstaff is only 1 1/2 hours, so we arrived when the chill had not yet left the day. After all, it was the tail end of a freak winter event, and if there were ever a ledge for wind to travel up, it’s The Grand Canyon. 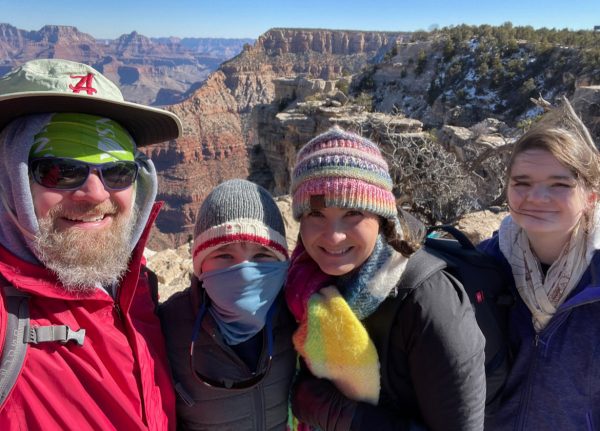 But that did not detract from our awe and joy at seeing it.

We slowly walked two miles around the rim, and were astounded at the lack of guardrails or signage telling people not to be stupid.

We also were amazed at the people we saw being stupid. Especially considering the slippery ground, thanks to icy snow. 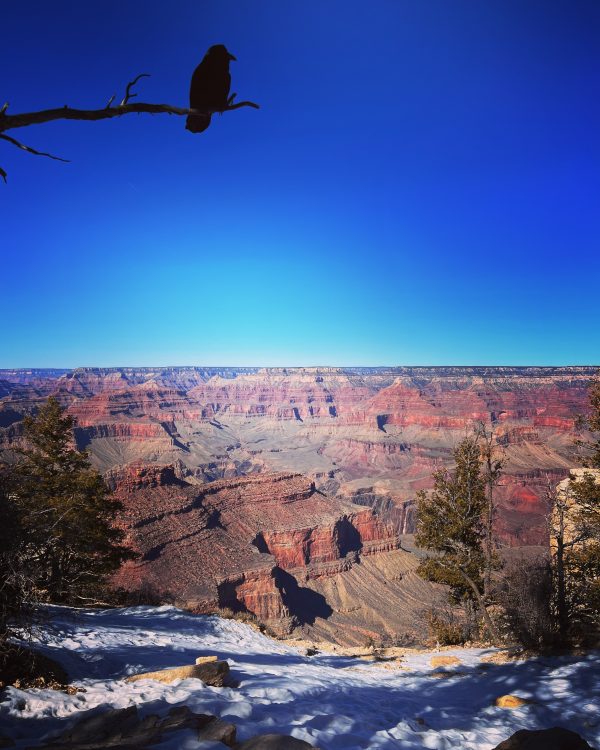 Pictured: Bird not being stupid. If only humans had wings like birds, they could also not be stupid around The Grand Canyon.

Although I adore heights, watching other people (especially children) near the edge of cliffs usually makes me nervous. But Chris was the surprising parent on this trip: he became Safety Dad, reminding the kids not to get too close, asking everyone to back up a bit, testing the integrity of the barriers, and having that constant slightly queasy feeling in his stomach from the sheer depth of the canyon…and meanwhile I was pretty okay. With our own people being careful, that is. With regards to other stupid people – I just had to not watch. 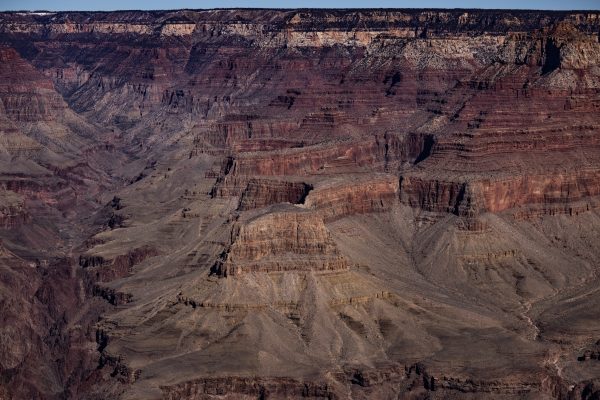 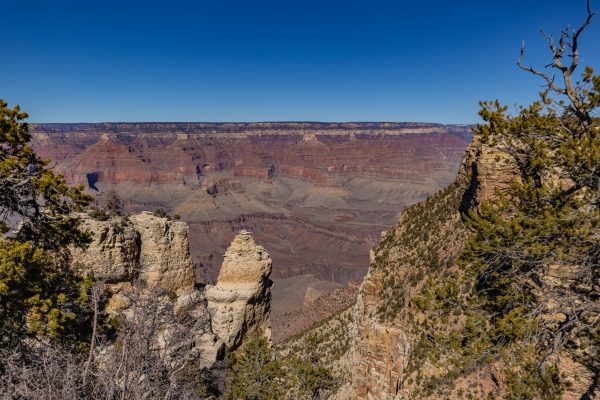 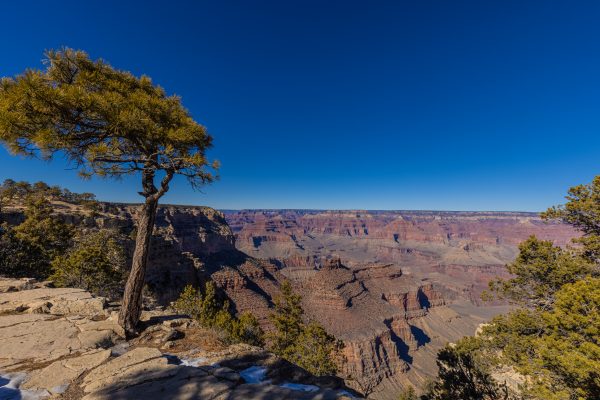 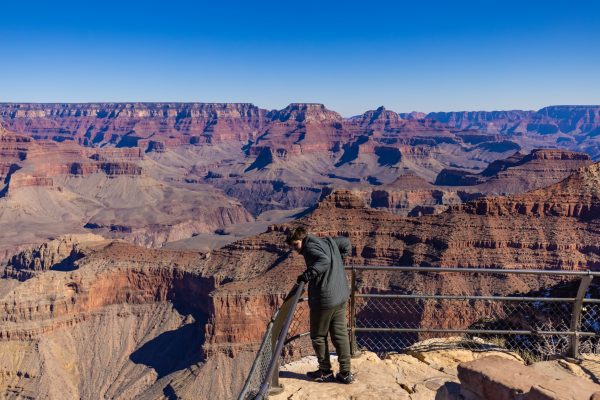 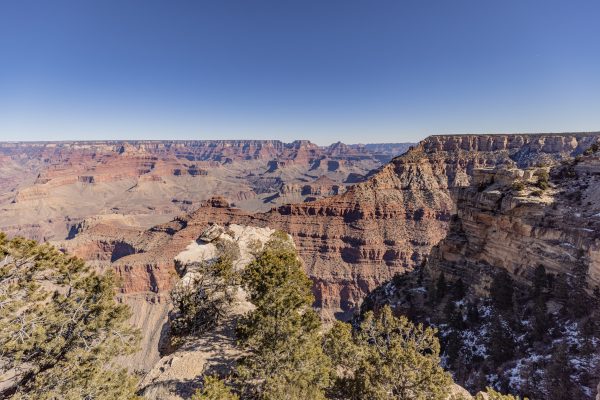 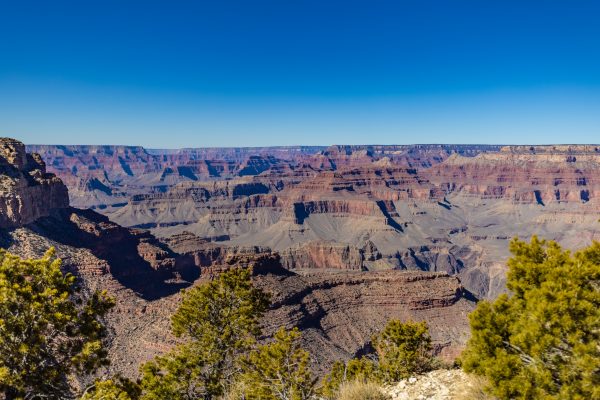 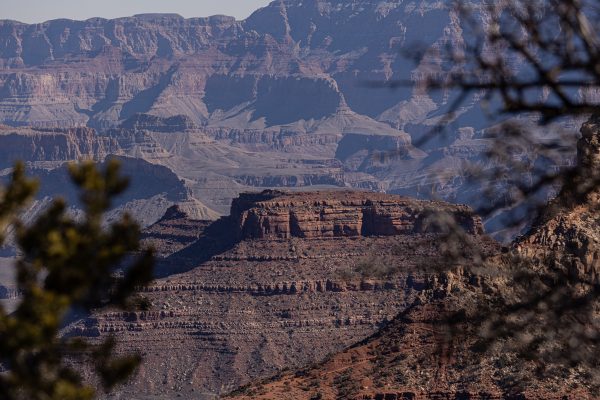 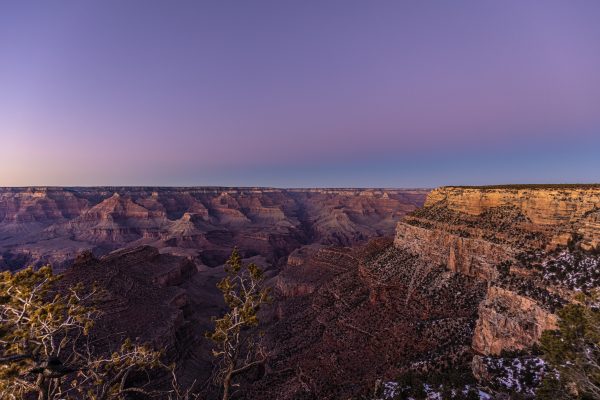 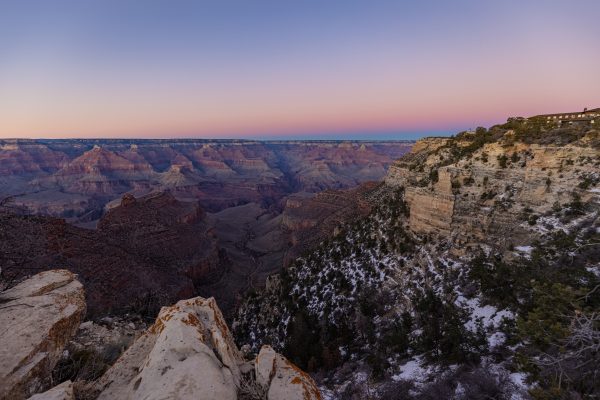 We ate a lovely lunch at the restaurant facing the canyon, having the place nearly to ourselves, which is how the entire day had been. February at The Grand Canyon is an introvert’s miracle – there were long stretches of our walk where we saw zero other people. I’m pretty sure that if we tried to go back at a more accommodating time weather-wise, we’d be immediately claustrophobic from the crowds – we definitely prefer to have our canyons to ourselves. 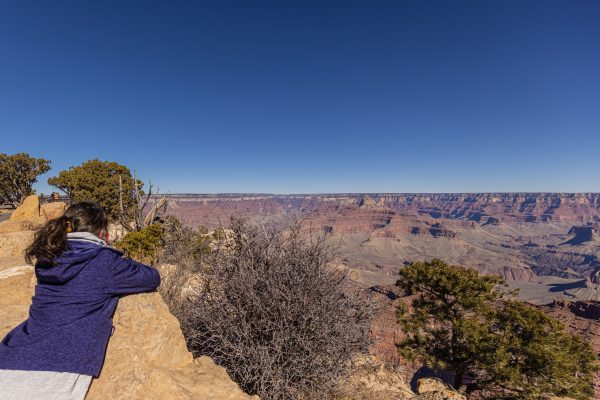 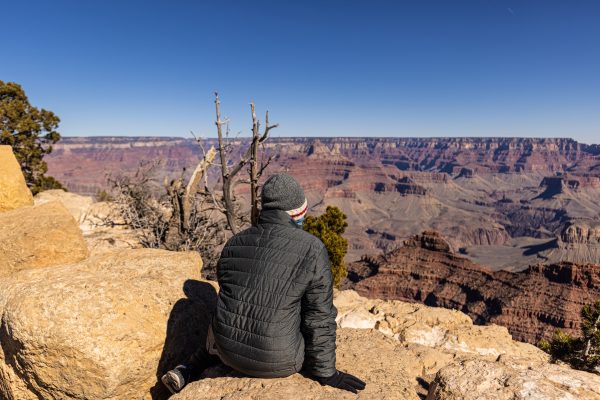 Other than the rim trail, we did not actually hike – although we did go to the entrance of The Bright Angel Trail and stare at the icy, slippery, barrier-less cliffside trail in shock and horror, very happy with our decision to leave no time for hiking. But we got our picture in front of that treacherous trail, at least. 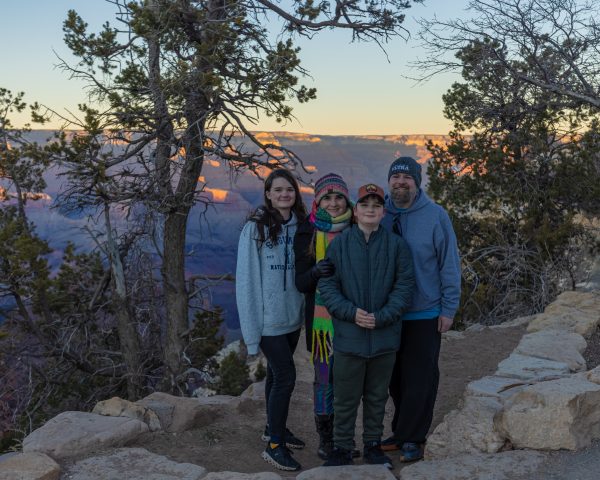 We did enjoy watching other people walk back up the trail, though, and I was especially fascinated by this natural archway they got to travel through. 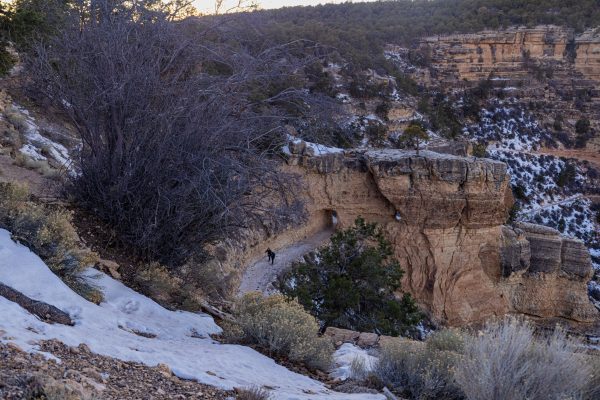 I bought a book at the gift shop, Ranger Confidential, which I just finished reading recently. The book is basically a former park ranger processing her grief at all of the deaths, dismemberments, and criminals she dealt with while working at The Grand Canyon. Now that I understand exactly how easy (and common) it is to die at The Grand Canyon, I can definitively say that I have no regrets at not hiking down that trail in the ice.

Maybe one day, in better weather, but maybe not. I’m cool seeing it all from the top as well.

Our day spent alone with the canyon was incredible, and it singlehandedly made that chaotic day spent rearranging our trip in the Houston airport totally worthwhile. 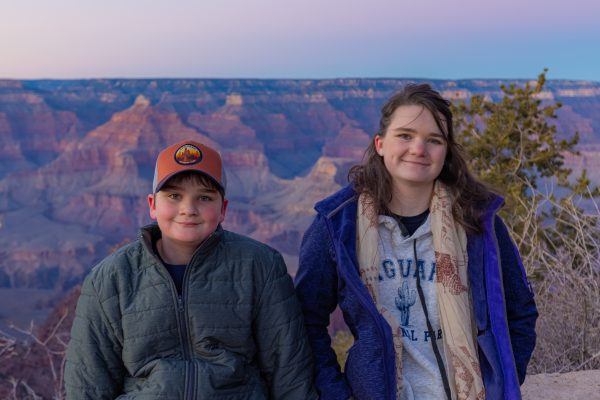