We’ve had a solid run of unsurprising air travel. On time flights. Made connections. Baggage arriving with us. Nobody in the family has used an air sickness bag. Yet.

But we pushed our luck a little too far scheduling a trip to the high desert in peak winter.

I’d been wanting particularly to take the kids to see the Painted Desert, one of my favorite memories from childhood travel, so I checked the average temps of that area, and it seemed like a solid choice. We planned our trip, flying into Albuquerque, and staying in Gallup, NM. Our chief aim would be spending one or two days in the Petrified Forest National Park and the Painted Desert, and then we had a list of other less well-known options nearby to fill our remaining couple of days.

We did not, however, have any way of knowing that there would be a freak winter storm with blizzard levels of snow and wind headed straight for New Mexico, and beginning just before we were to land, thereby giving us the opportunity of driving through the desert blizzard, and of experiencing below zero temperatures for the first time in our lives. 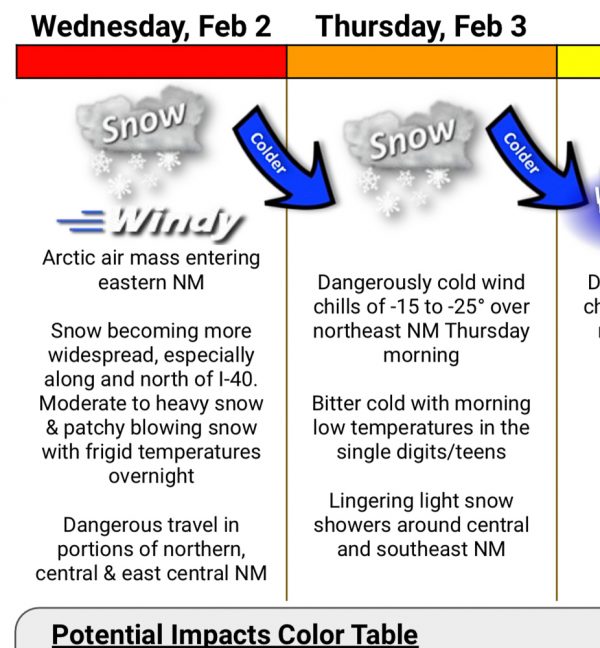 As the trip got closer and the forecast grew whiter, we were not amused. This is not the desert we had envisioned. 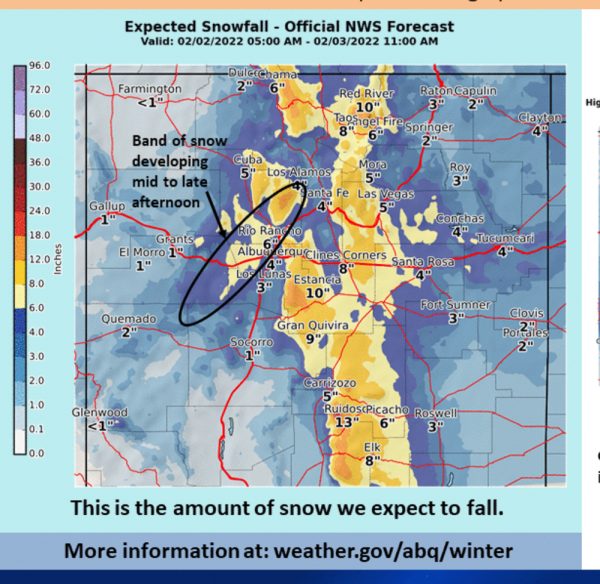 But we had the tickets and we were going to try and make this work. We got up in the 3am hour and headed to the Birmingham airport to forge ahead. 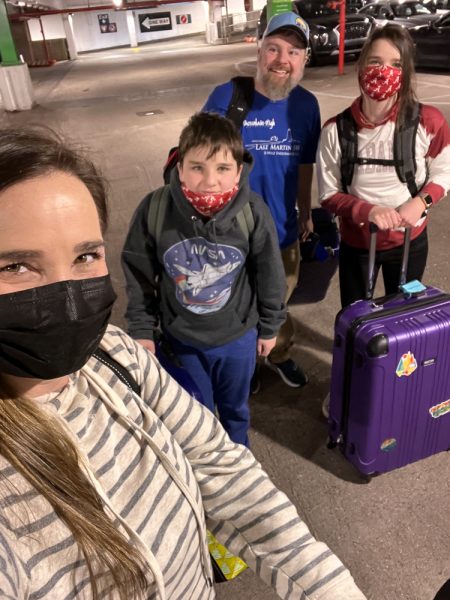 Perhaps the Flight Attendant’s little friend should have been our first clue that the day wasn’t going to go exactly as planned. 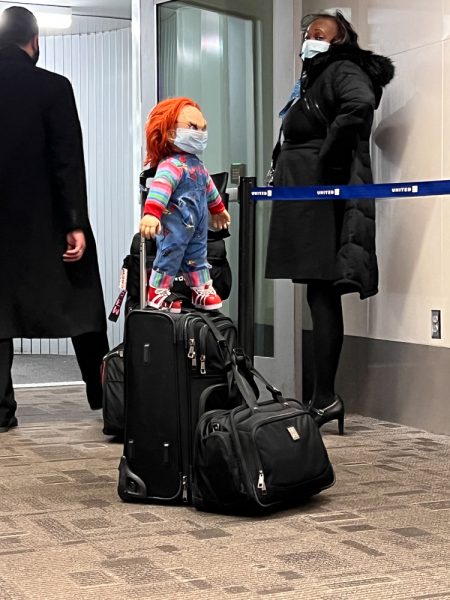 He kept showing up during our first flight in weird places, like chilling outside the bathroom door, 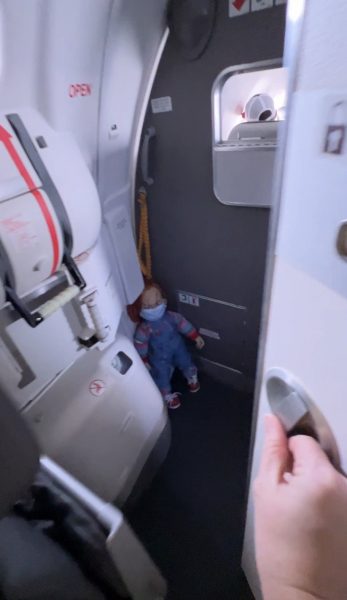 or strapped into an empty seat, or standing on top of the last seat on the plane when it was time to land. 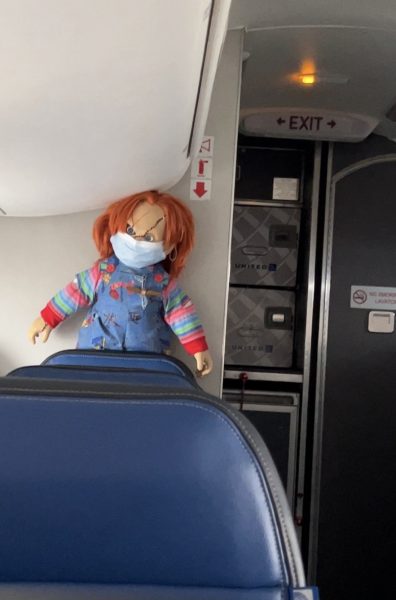 Did I think Chuckie was going to somersault into me as we hit the ground? Yes. Did this make me giggle? Also yes.

He was a special friend. And, when inquired as to their relationship, the flight attendant explained that Chuckie was his “Emotional Support Doll.”

But it was that flight with Chuckie that was ultimately our downfall – it was delayed an hour from taking off due to fog in Houston.

stinking fog changed the trajectory of our week.

Because that delay led to us having to move our next flight from Houston to Albuquerque back one flight. And although the original flight to Albuquerque made it to the destination just before the snow started, the second flight was not so lucky…

When our Chuckified Flight landed in Houston, we began checking the weather. It was definitely now snowing in Albuquerque, but airlines knew how to handle this sort of contingency, right? Our next flight still showed “on time”, so we got our lunch and BELIEVED as hard as we could that we would be in New Mexico in just a couple of hours.

(Chris might or might not have been also envisioning getting stuck on the highway in one of those 24 hour blockades of cars stuck in snow and ice, but he chose not to share those worst case scenarios with the family.)

The Houston airport was chaos. People sprinting here and there as gates got shuffled, people wailing in terror as flights got cancelled – both due to the weather blanketing the midwestern quarter of the country and due to staffing shortages.

But our flight still held.

Ten minutes – TEN MINUTES before boarding, the sign above the gate changed from “On Time” to “Canceled.” Just like that. No delayed. No yellow light in between the green and red. Just…canceled. 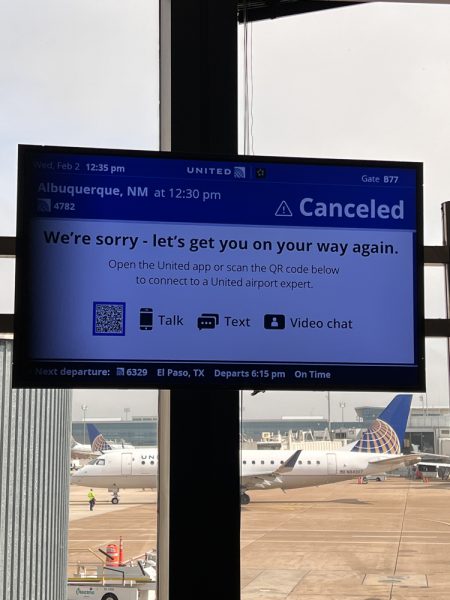 The snow had gotten too bad, the visibility was gone, and Albuquerque was not going to happen.

So now it was game time.

We had never experienced this particular travel situation before. How would Callahans react? Would they give up and find a flight home? Would they stay in Houston and make the best of it? Or would they try to find some way out of this airport and fly to somewhere halfway interesting?

(Sorry, Houston. But I have issues with Texas. Too many day-long drives through the emptylands of your state to ever want to visit again.)

I began looking around the terminal in which we were now stranded, checking to see what other destinations were available.

Phoenix – but that flight wasn’t leaving for several hours, and the employee I roped into helping me also added that it was full.

Tucson. Could Tucson work? It was much further south than we planned on going, but the upside of that would be a definite lack of snow and below zero temperatures. And also, it got us out of the Houston airport, which was growing more hysterical by the moment.

There were two flights headed to Tucson, both currently delayed due to staffing shortages. They could transfer us to one of those flights, but it took over an hour and five customer service phone calls to make the transfer without any charge. Meanwhile, we canceled our hotel and rental car in Albuquerque, rebooked a hotel in Tucson for one night (until we figured out what we were doing) and booked a one-way rental car from Tucson to the currently-supposed eventual destination of our return flight from Albuquerque.

A couple of hours later and about five more reasons given for delays, we were headed to Tucson, Arizona – home of Saguaro National Park and 55 degree weather. And approximately six hours later than we’d intended to arrive at a hotel, we checked into Tucson, having driven on no snowy roads nor gotten stuck in any icy embankments. As opposed to the current state of the state of New Mexico. 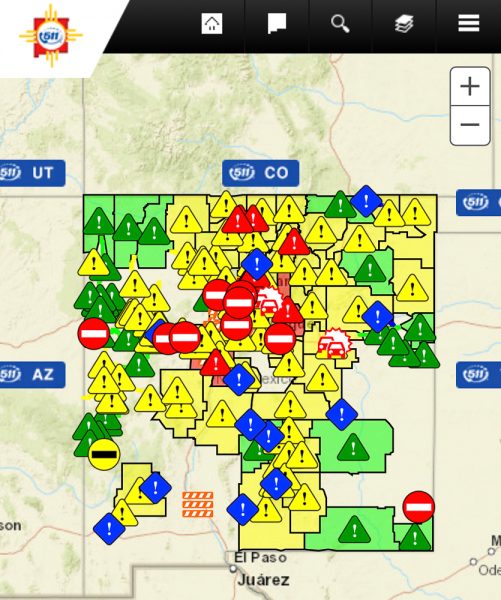 The uncertainty and the airport and the waking up well before sunrise had definitely left us all exhausted, so we ordered room service, laid out a map of Arizona, did some travel time figuring, and had a family strategy meeting, then a vote.

This was my original plan’s notes, the entire right page now being moot. 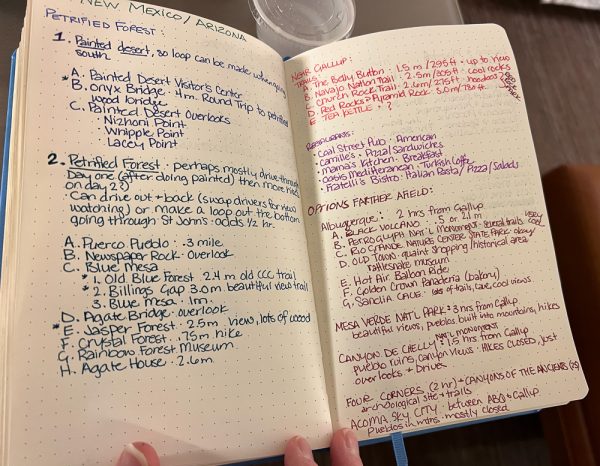 And these were my new groggy attempts at re-planning, trying to figure out what the priorities were, how far it would take to get places, and what we were going to do with ourselves for the next four days. 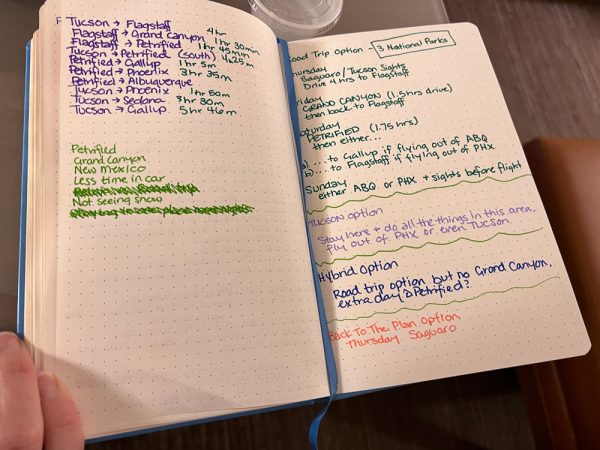 Should we stay in Tucson and enjoy where we serendipitously ended up?

Or should we turn this into a road trip – something I’d always avoided because it felt exhausting – and, due to the direction we’d have to travel to eventually end up in Albuquerque, see three national parks instead of the intended number of one?

We gave everyone a secret ballot to rate their priorities and desires, and there were understandably mixed feelings due to exhaustion and uncertainty, so we left the final vote until morning after a good night’s sleep for everyone.

The next morning, after we ate a fancy breakfast looking out on half a dozen heated pools and lovely mountains, 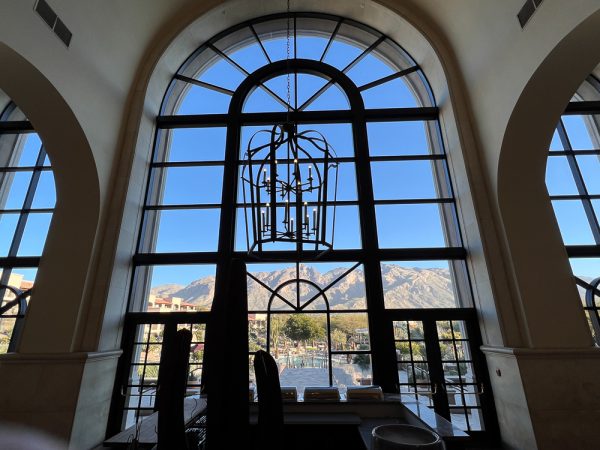 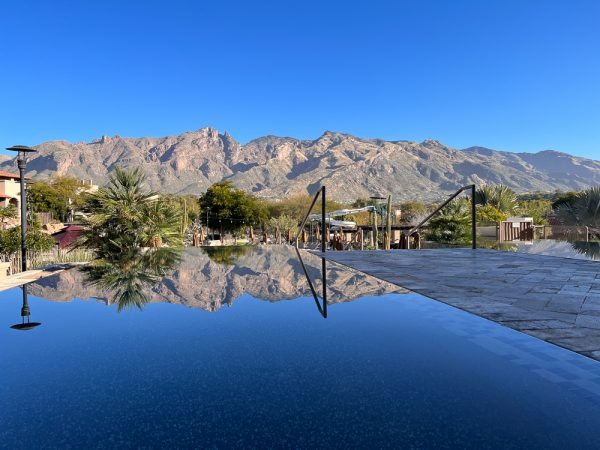 then went out back and touched our first cactus – because that’s what you do in Tucson. 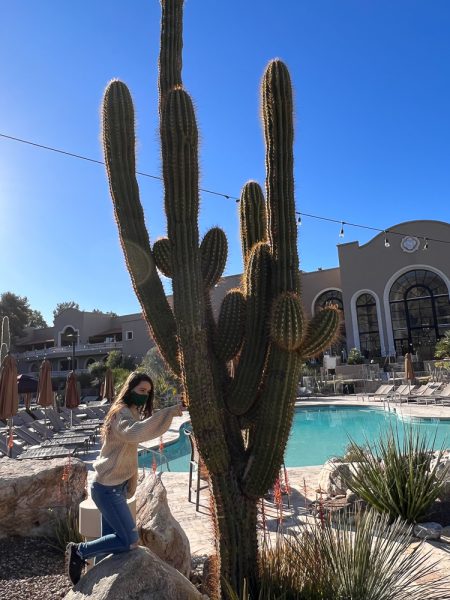 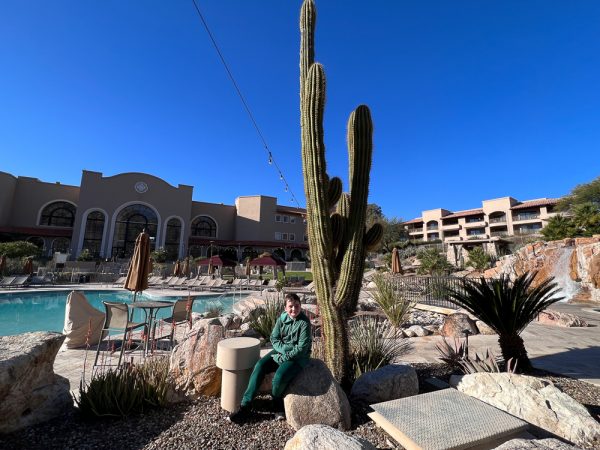 Then we decided: though we would earmark Tucson for a return visit (because this hotel would be awesome in slightly warmer weather), we would do it: we would road trip.

So from our completely upended travel day, we learned important lessons.

…Fog can be a dark horse gamechanger.

…If you ever get on a flight with Chuckie, know it’s going to be an interesting day.

…If the desert is too blizzardy, go to a more deserty desert.

And we now have a new family saying:

2 thoughts on “Making Travel Lemonade on the Fly.”