The thing is, I’ve always been mostly against matching.

I have written about it here. Multiple times. Sure, Ali and her best friend had matching pjs when they were toddlers – but match my husband and my son? Never would I ever. My family knows this. My family has watched me agonize over wardrobes for family photos – my circular thoughts spinning out on “how can we NOT clash, coordinate-but-not-cheesily, but DEFINITELY NOT MATCH?”

I have lived my life by these principles.

So they should have suspected something when I got Chris and Noah matching shirts for Easter.

They should have known.

But apparently I’m just so endearing, so trustworthy, so innocent, that they never suspected a thing.

I thought they’d KNOW ME WELL ENOUGH to be suspicious, so I tiptoed nervously through the process. With Noah, I just told him – “Here’s your shirt to wear for Easter Sunday. You can’t wear joggers with it. Try on your blue jeans or dress pants.”

(Yes, it’s been so long since the kid wore a real waistband that a trying on was necessary.)

But with Chris…I didn’t know how to broach the subject. I was sure he’d sniff me out.

So I hung his shirt in my closet door to wait until I figured out how to innocently tell him.

It had been there for a couple of weeks. Finally, he was really relaxed and cozy one night so I said “By the way…I got you an Easter shirt.”

He mumbled, “The one hanging in your closet?”

No “But you’ve never bought me an Easter shirt before…”

He just….ACCEPTED this as a normal thing that his wife might do.

So when we arrived at Church on Easter morning, he was innocently tickled to see that he matched the guy walking into church in front of us. His first assumption was that I had seen a good deal on a dress shirt, and apparently so had that guy’s wife. They even posed for a picture, it was so funny. 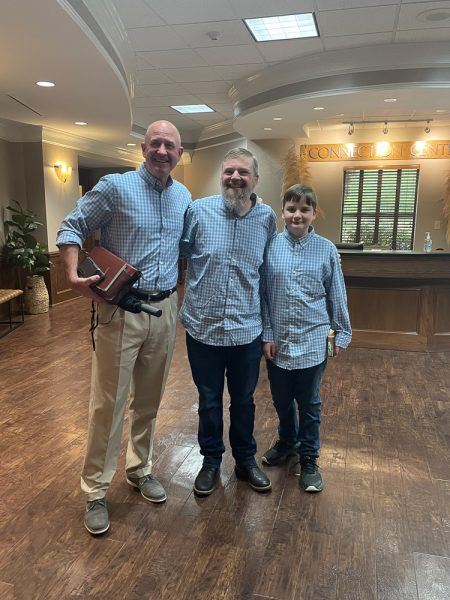 It took the process of walking downstairs, into the fellowship hall for breakfast, and seeing literally dozens of grown men matching him to realized that he’d been had. 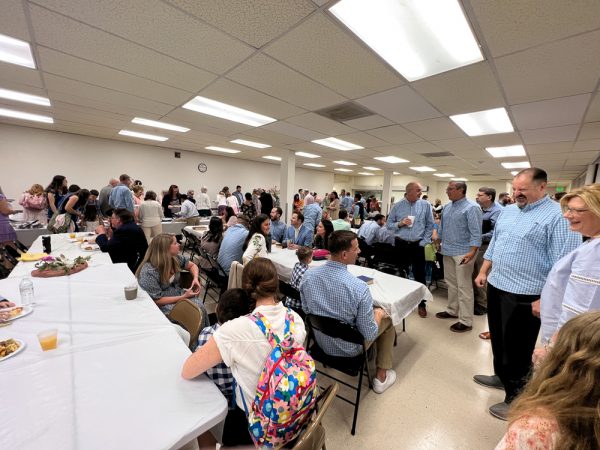 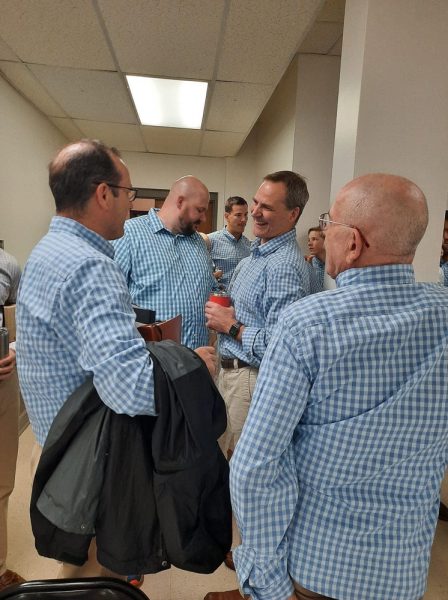 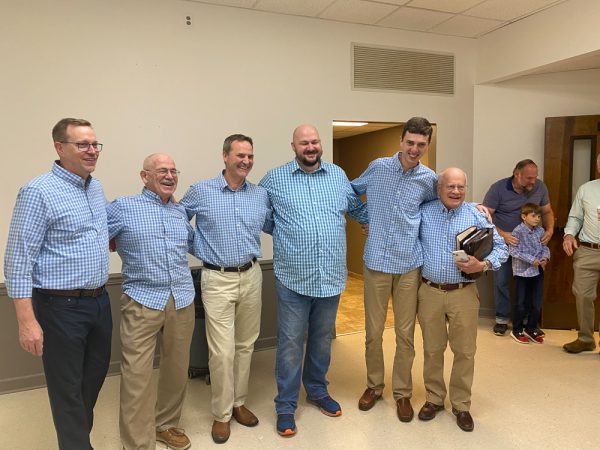 Noah, however, was just so confused by it all. 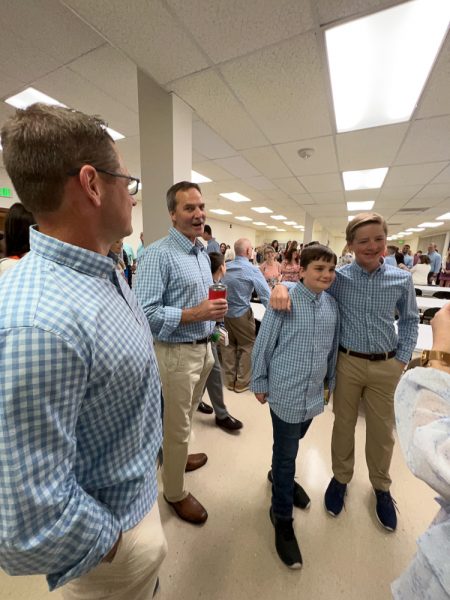 He wandered off with his friends, still more confused than I realized.

It took an hour and a half for him to realize that maybe this was planned. After breakfast, when we were getting our family photo, he asked me suspiciously, “Wait. Did you KNOW this was going to happen??” 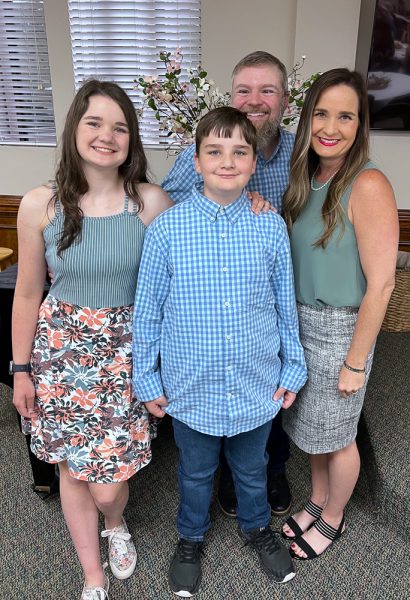 “Seriously, kid? How did you think that more than 50 men were wearing the same shirt, if the wives didn’t plan it??”

“I don’t know – I guess I thought it was a big coincidence or something.”

Clearly I’ve let him read too many books that overuse coincidence to progress the plot.

The effect of seeing 50+ grown men wearing the same shirt was incredible. 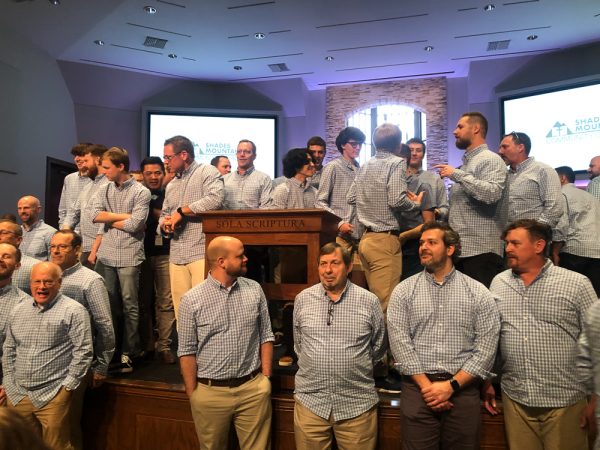 We ladies giggled all day at the obvious dominion over all things. 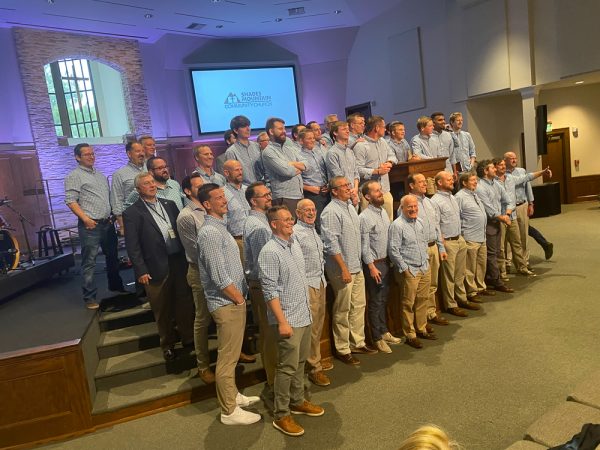 It was a plan masterminded by our pastor’s daughter, Sarah, who ended up on the local news about it all:

She suggested it in our all-women’s Facebook group a few weeks ago, showing a video of another church that had done it on a smaller scale and picking out a shirt for us all to order. I immediately loved the idea but watched to see if it would catch on. Within a few hours, women were commenting. “I’ve ordered one!” “Me too!” – so I quickly ordered Chris and Noah one. I hoped at least 20 men matched them. The precious matching men exceeded my wildest dreams. 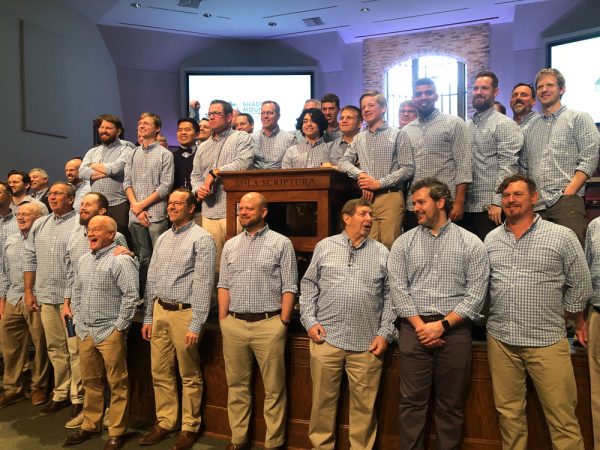 I counted 54 men – but I’m sure I missed some. Those men included the Pastor, the Worship Minister, and the Children’s Pastor. And none of them had any idea until they got to church that they’d find it necessary to take an adorable matching photo with half the church. 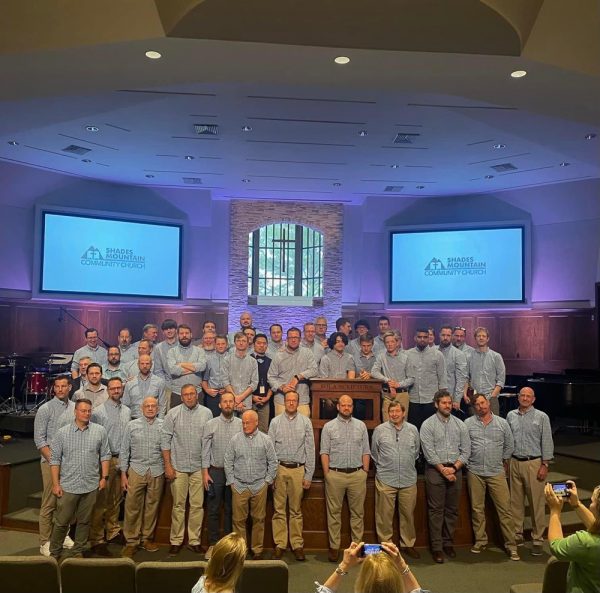 Are the men plotting their revenge?

Of course they are, bless their hearts.

Because girls rule the world. And we have proven it.

7 thoughts on “The Great Husband Match.”