So we’ll go with Monday.

As with every beginning of semester, there was confusion over who was responsible for what. 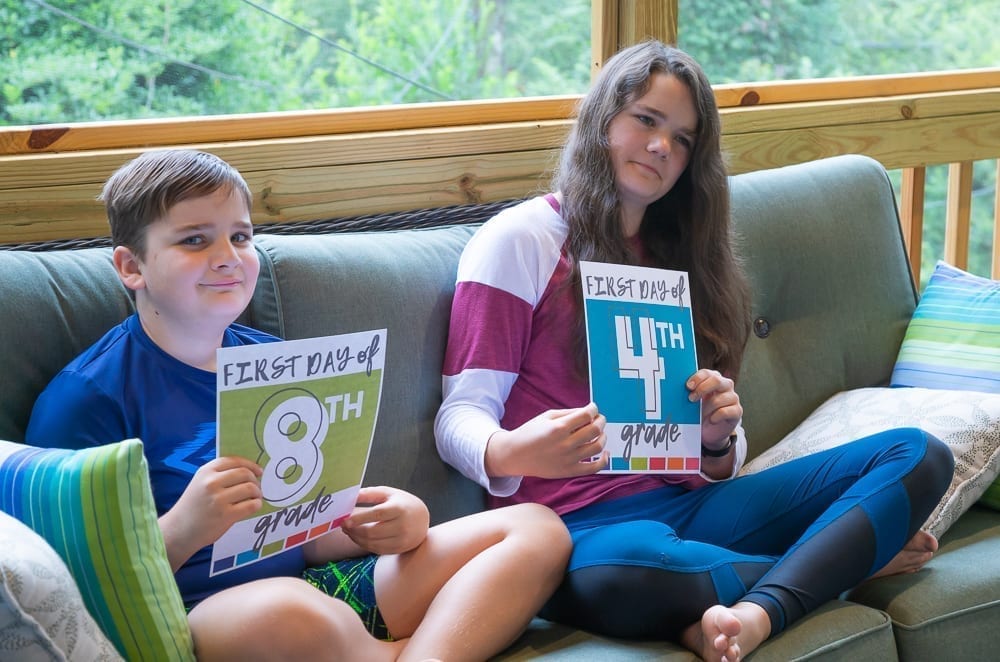 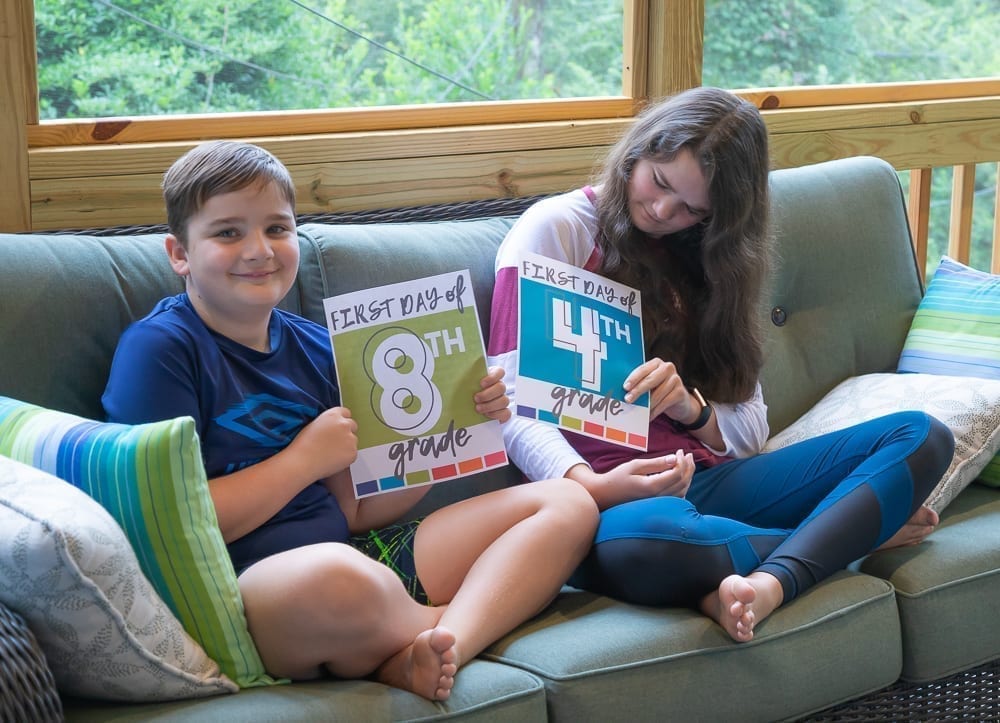 As well as general forgetfulness about how to do things correctly. 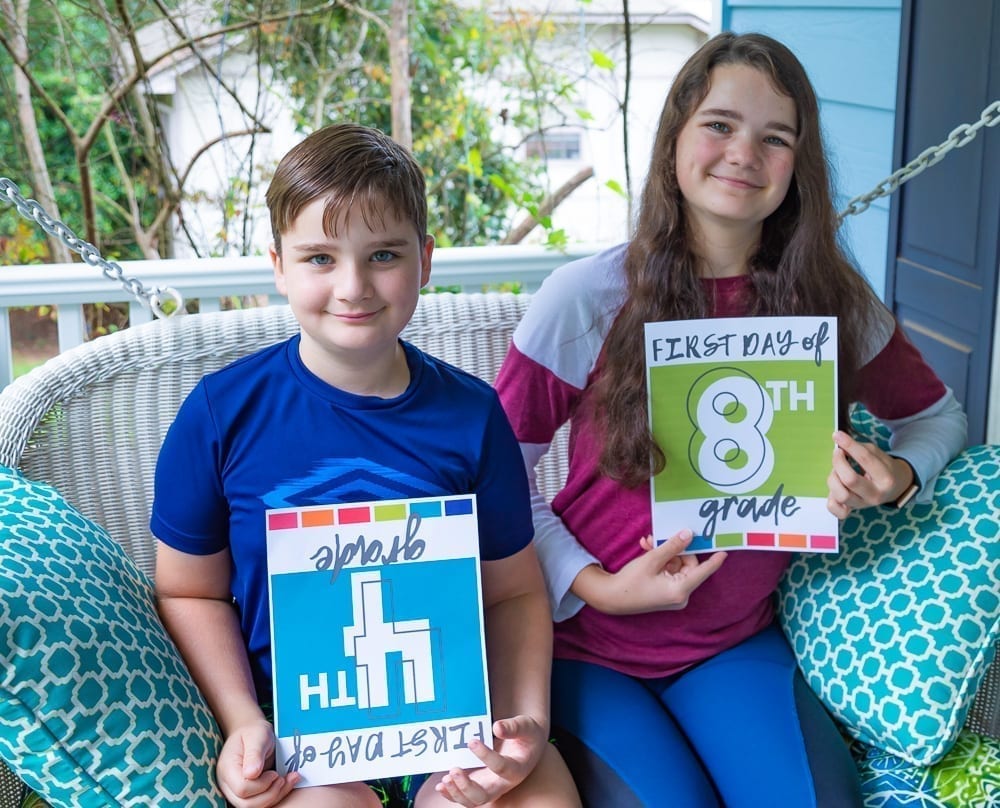 But we’re getting things worked out, and fourth graders are remembering how to be diligent and neat. Maybe. By the end of the school year. 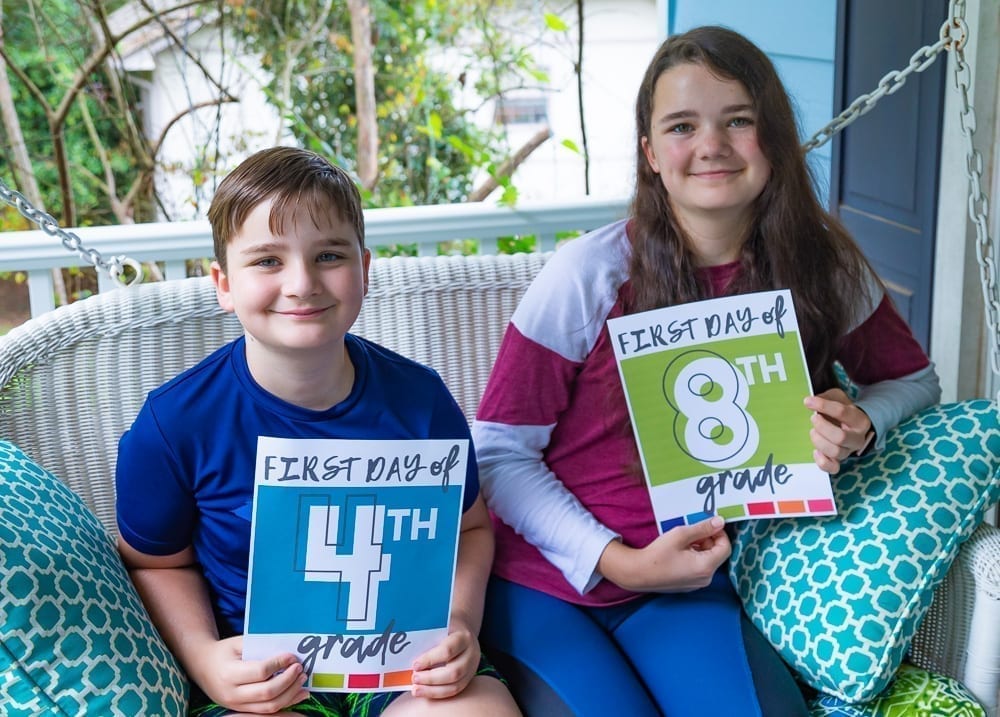 Before we could get to any of that actual school stuff, I stumbled out of bed, a little before 8 and after Chris left for work (because why homeschool if you’re going to set an alarm), and as I was brushing my teeth, I was vacantly staring at a small white object next to my sink.

I had no idea what it was, but my sluggish mind was slightly confused and curious.

So I rinsed my toothbrush and then looked closer.

The white object was a tooth. Left for me(?) on a piece of memo paper.

As a First Day of School gift? 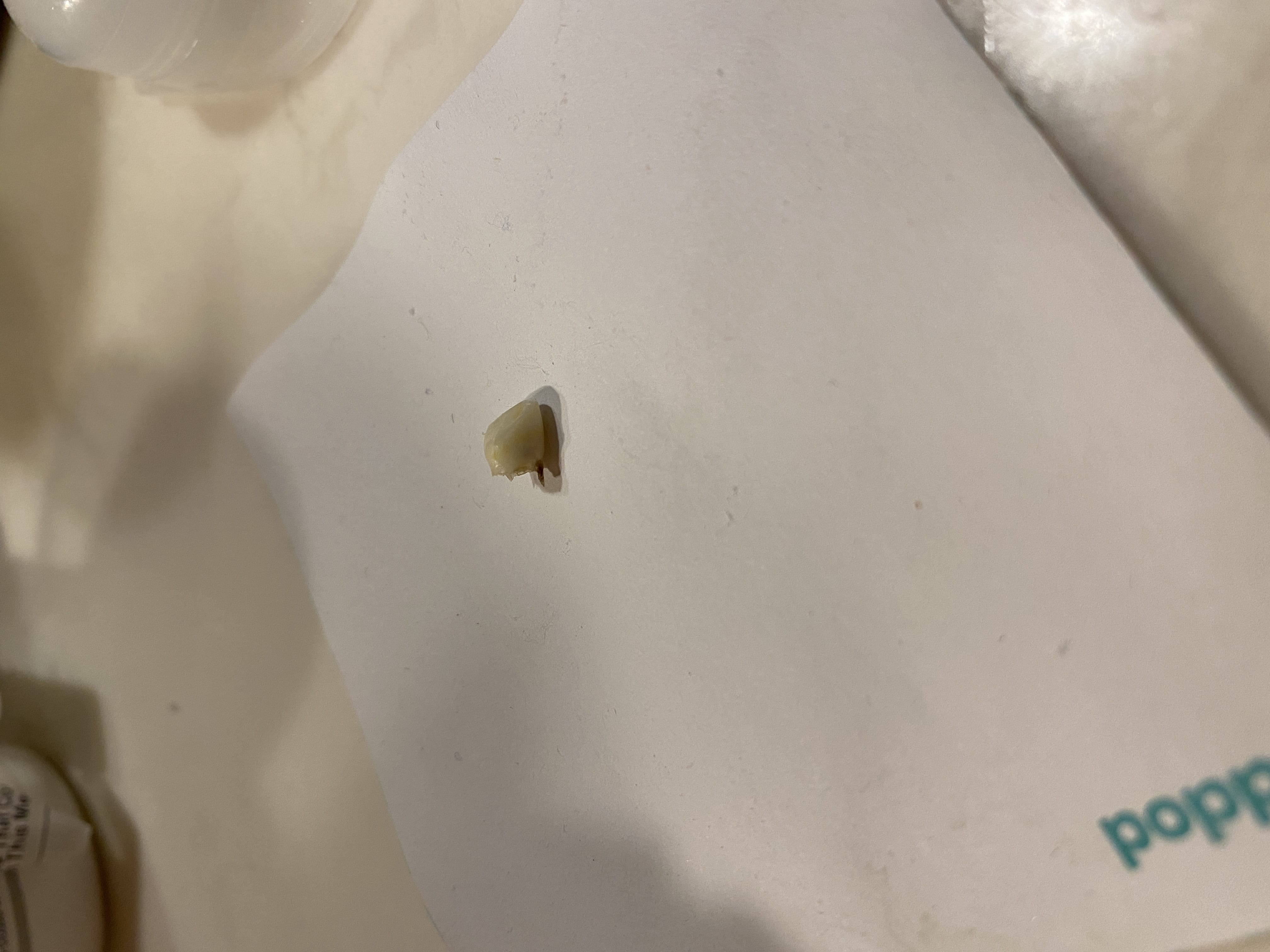 Who left me such a precious gift?

Ali’s lost all of her teeth…and Noah didn’t have any loose teeth that I had been made aware of. He’s in that in-between tooth drought where he lost the first eight but the rest haven’t begun their descent from his mouth yet.

I guess he pulled a tooth in the middle of the night and gave it to Chris?

Nothing else accounted for a tooth by my sink.

But it still seemed slightly disturbing.

So when I went downstairs and greeted my children on their first day of school, I led out with, “Who lost a tooth last night?”

“I don’t have any teeth left to lose.”

So you’re saying that no one lost a tooth last night?

In a slightly more creeped out tone I asked, “Then why is there a tooth on my bathroom counter?!”

“Why would there be a tooth on your counter?”

I needed to understand this before my stomach could digest food. 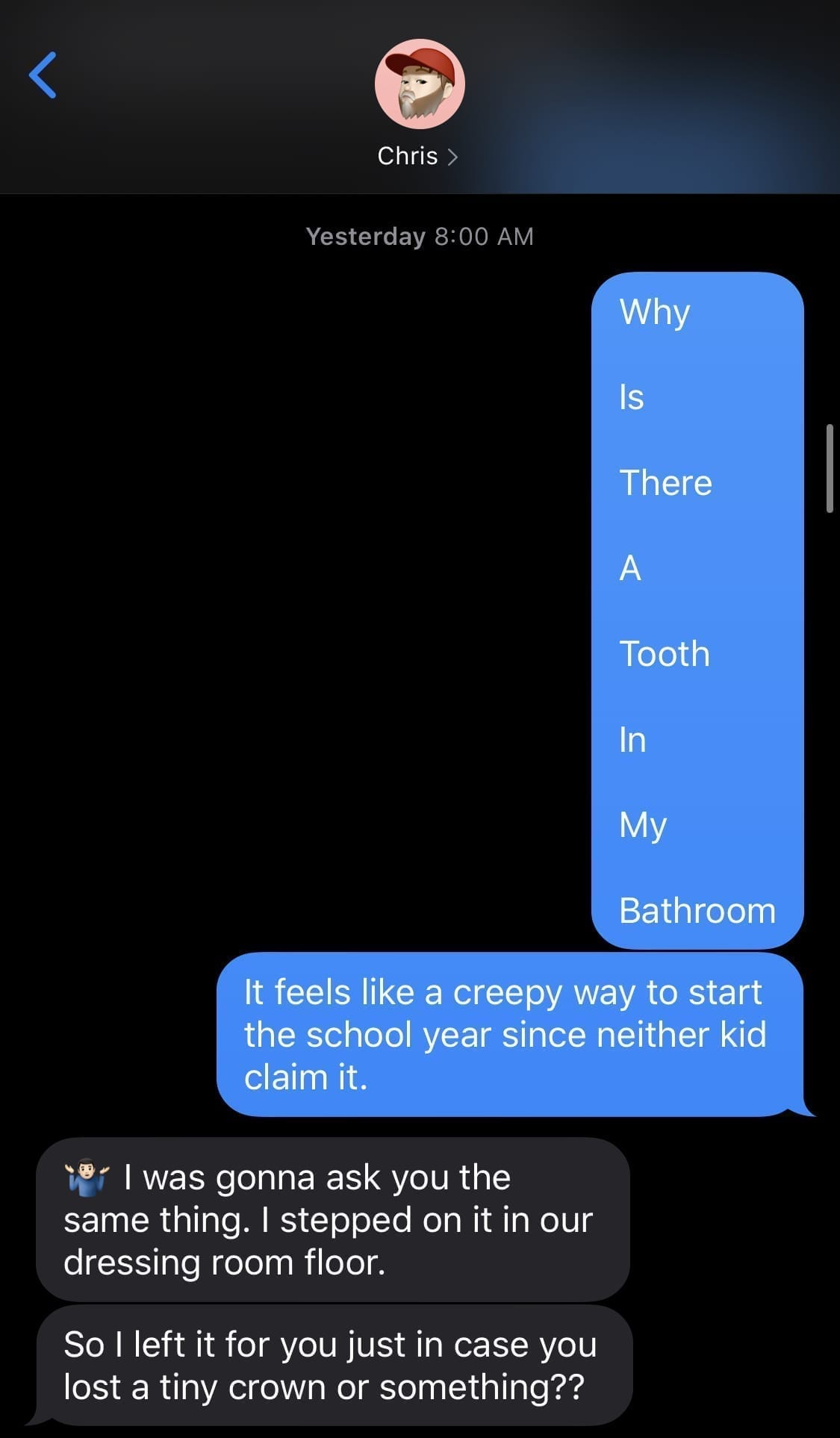 I sent Chris a picture of his children’s faces when I read them this text. 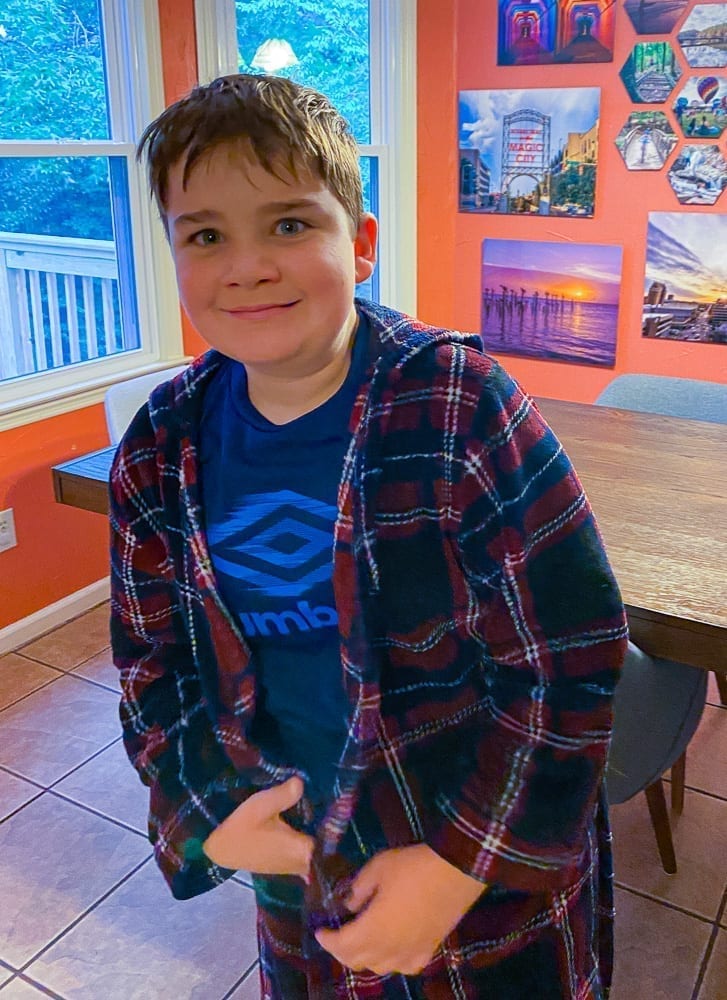 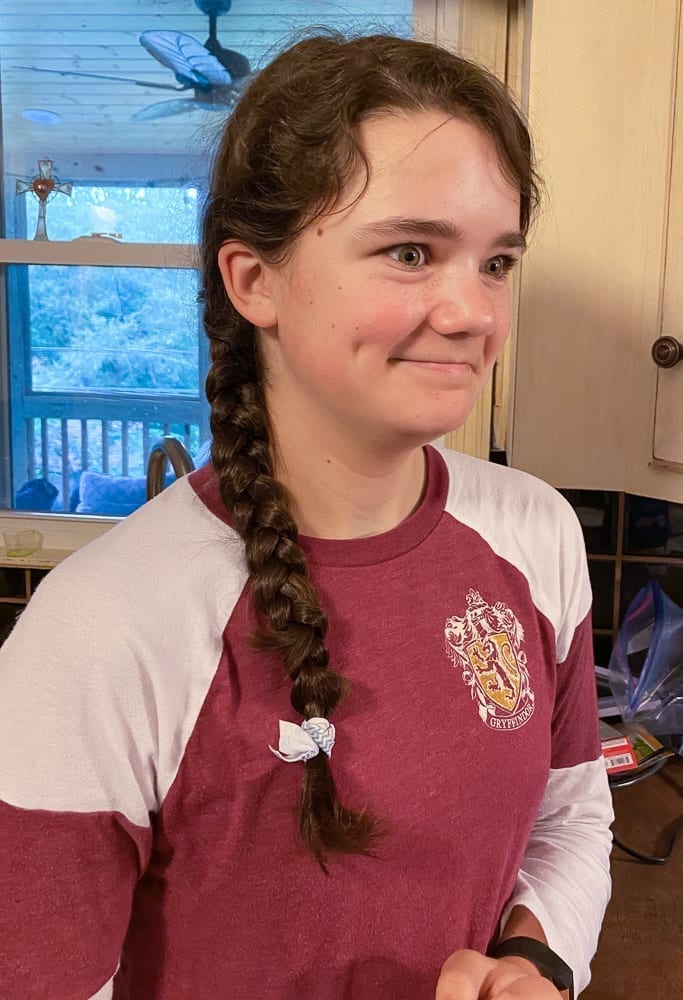 Still. This has to be Chris’ fault. He’s the keeper of all their teeth…and various other family body parts. 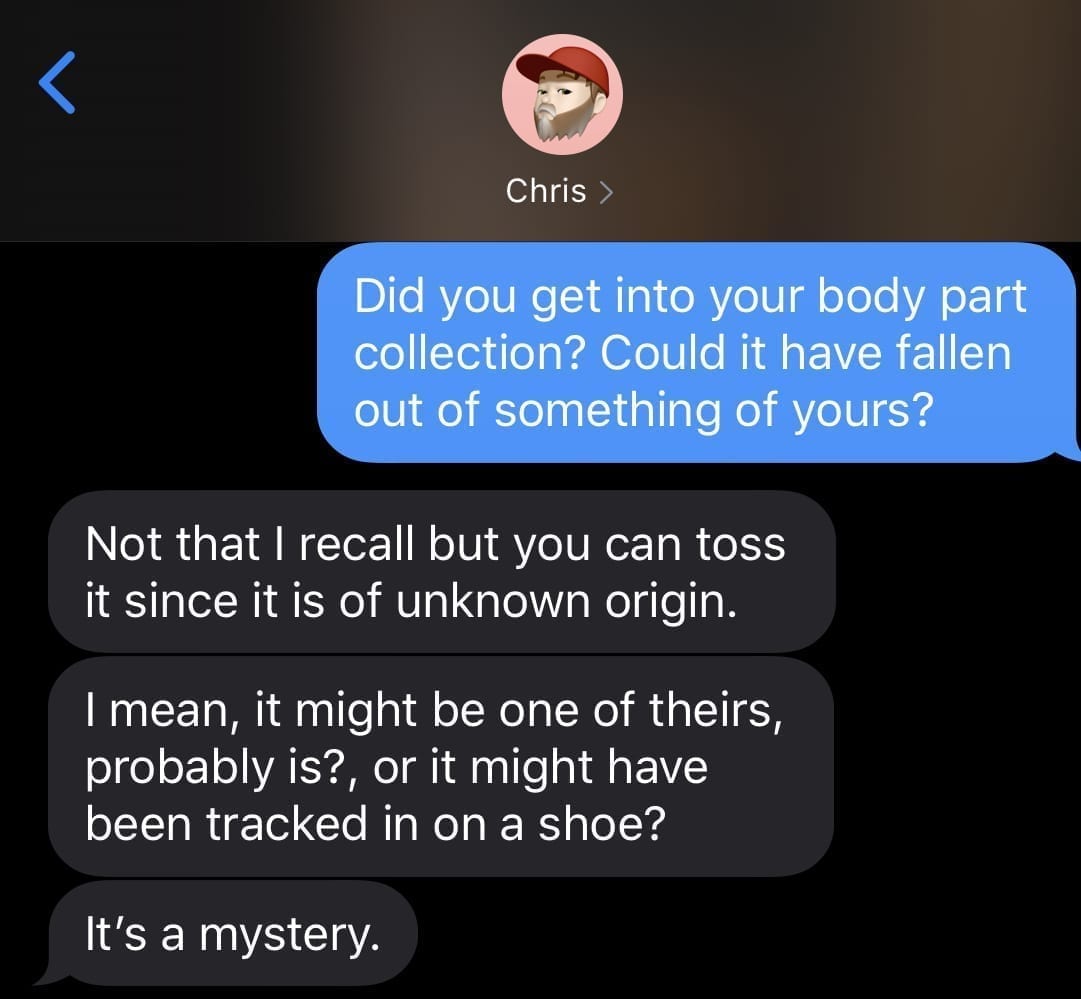 I mean…I love a good mystery, but only when it can be solved. And I wasn’t quite willing to do DNA testing on this tooth to properly credit its owner. So if one of you can come claim this tooth or explain its origins post-haste, I would greatly appreciate it.

But after we got over the horror movie soundtrack playing in our minds about the teeth that were definitely stalking us, it was time to actually start school.

Noah is in fourth grade this year, which means it’s time for a repeat of our Alabama History project. When Ali was in fourth grade (which is the typical year to teach state history in Alabama), I decided I didn’t want to use the textbook that hasn’t been changed since I was in school (and was frightfully dull and not exactly two-sided), but instead I wanted to walk through the history of our state chronologically through weekly field trips. And in so doing, let her take pictures, write reports, read books and biographies that fleshed out our trip, and create her own Alabama History book that ended up being quite thick and thorough.

It was a great success and we all learned – and retained – much. Noah, however, mostly remembers that Ali was gifted with a camera for this project, and he said he’s been waiting four years to get his own.

Needless to say, he was thrilled when he received such a device last week.

I reworked my timeline spreadsheet for a new year, deleting our least favorite field trips and adding some new ones, and we took our first field trip last Friday – to Natural Bridge Park in Natural Bridge, Alabama (population 37.) 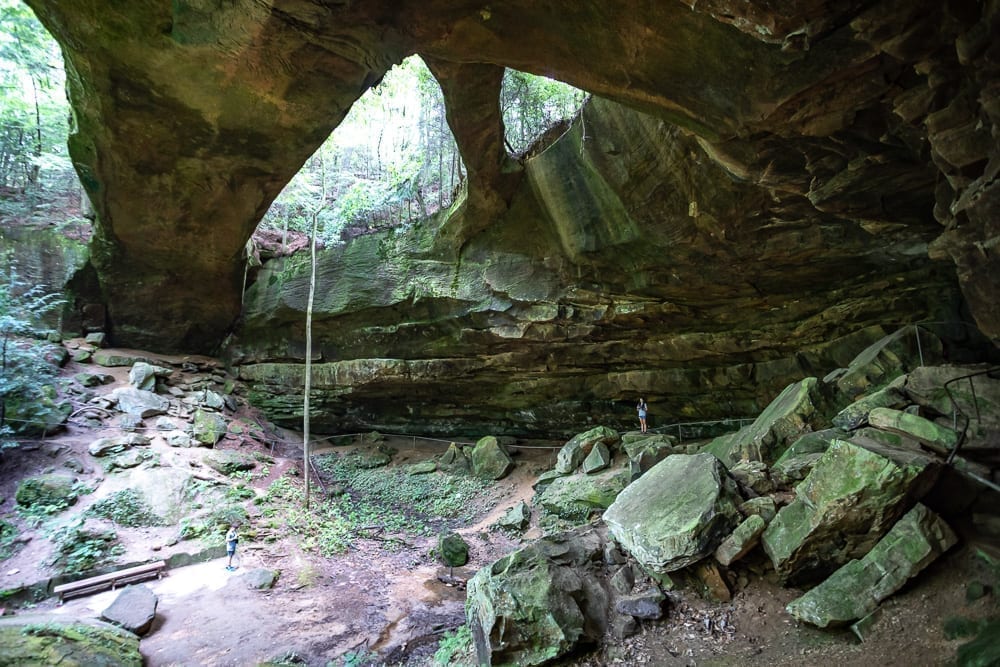 Although it’s more geologically extraordinary than historically so, it’s a great example of overhang caves that early people groups used for shelter. 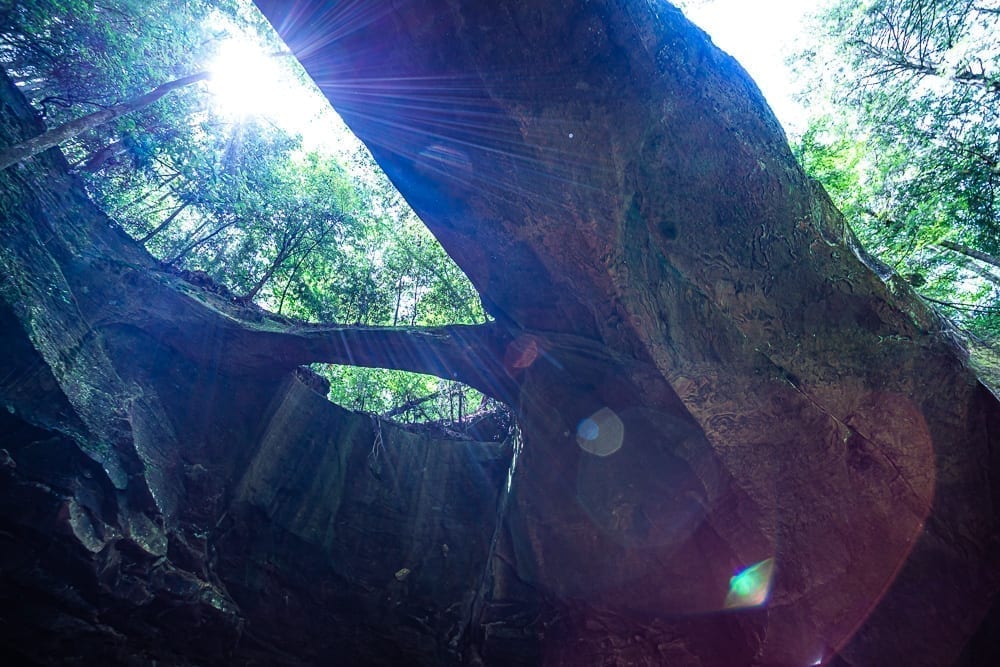 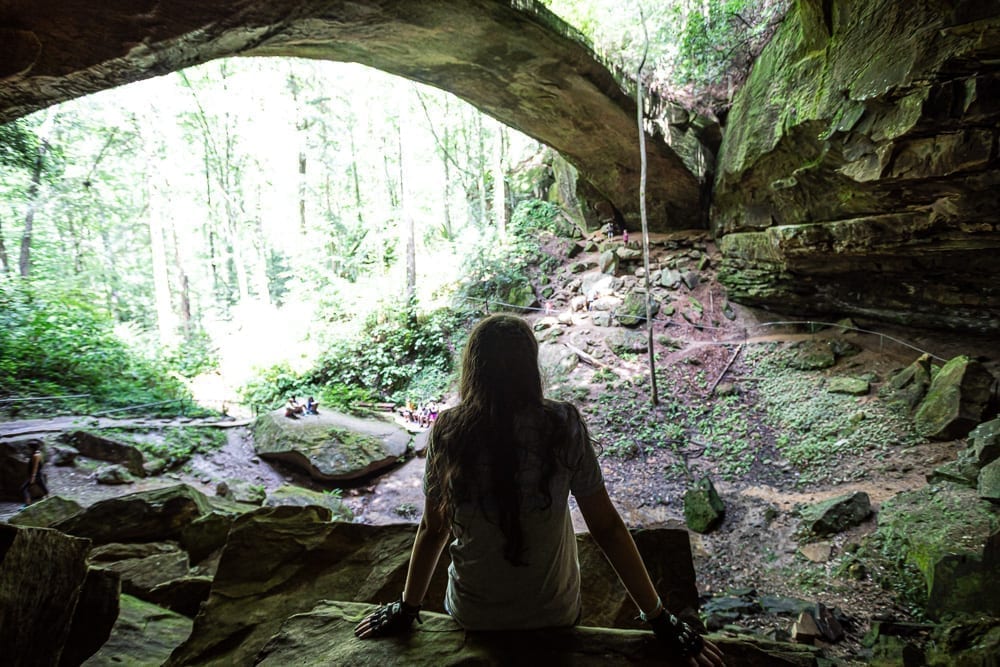 And it just so happens to be in The Free State of Winston, also known as Winston County, which is the only county in Alabama to be a “Union County” during the Civil War, and so it seceded from Alabama when Alabama seceded from the Union. The county was also a safe harbor for draft dodgers and the anti-confederate residents of Alabama. So all kinds of history! And a good excuse to get outside.

Noah began writing his report on his first field trip (and captions for his first photos) on his first day of school – the first entry in his future Alabama History book. 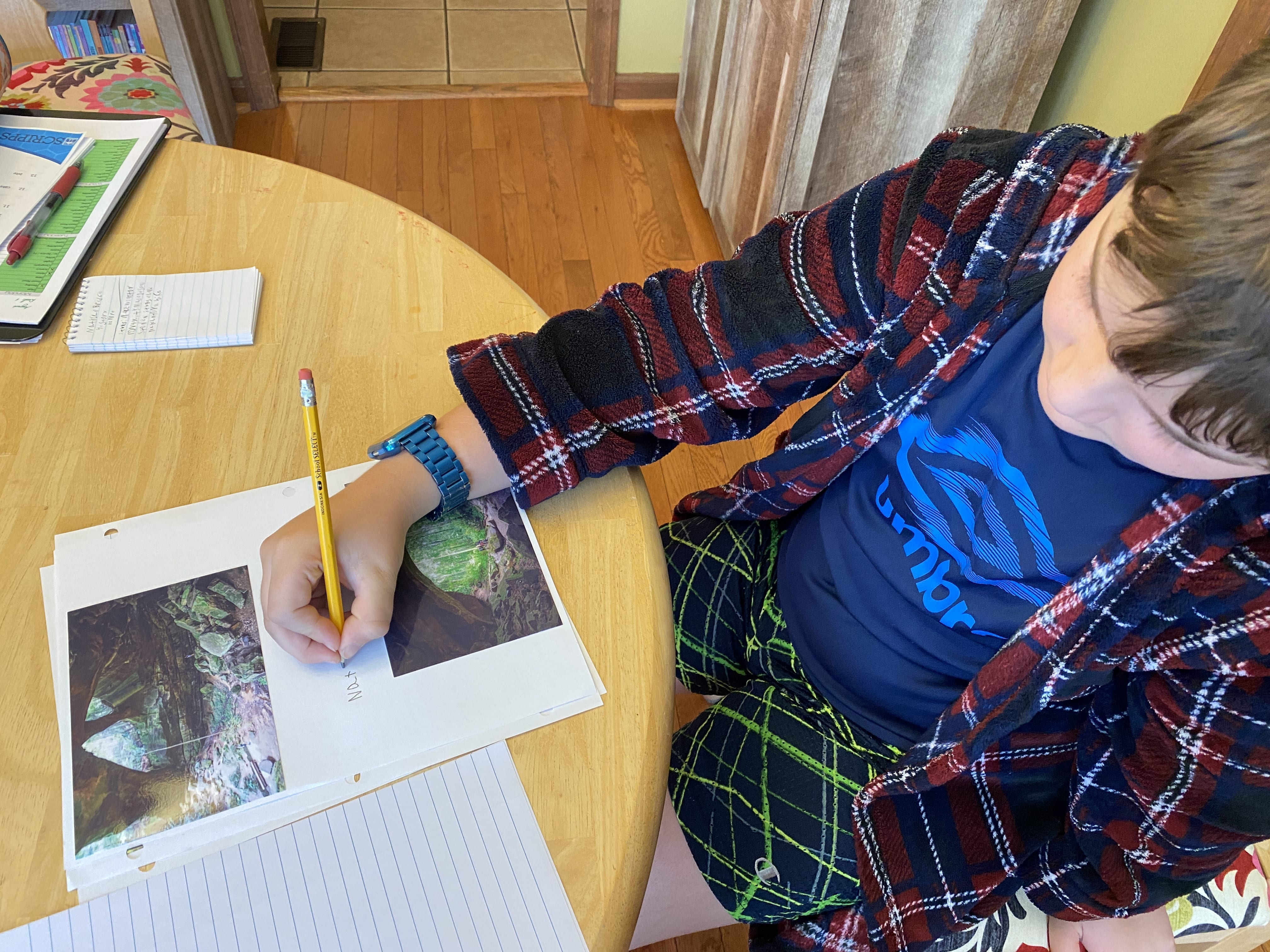 But what the kids were most excited about was a First Day of School present from their dad and granddad – Chris had been to visit his parents over the weekend, and in an effort to curb the coin shortage and thrill his grandkids, his dad gave Chris all his coins to give to the children – which we made them split completely evenly with each other (penny for you, penny for me, nickel for you, nickel for me…), and then count and roll it before they could use any of it. It’s the gift that keeps on giving. 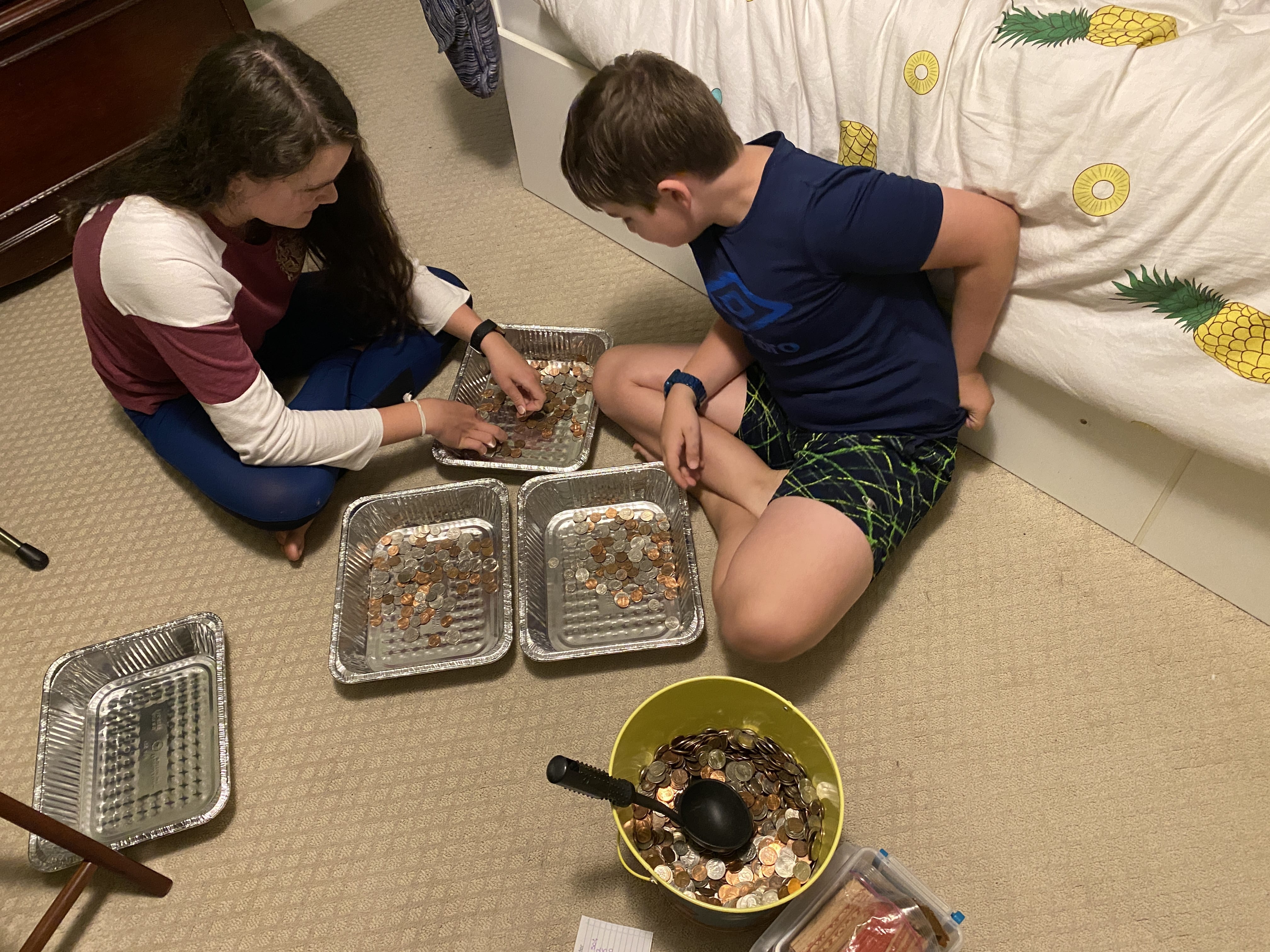 But they’ll really be surprised when they get to the bottom of that bucket and find the tooth that I planted for them there.

3 thoughts on “The First Day of School and the Unclaimed Tooth.”