{Fair Warning: There will be blood.}

This was a crucially important family moment, because her nearly two-year-old brother has developmental milestones on a daily basis.  But at the age of nearly six, Ali is at somewhat of a developmental plateau, and mightily jealous about her status.

So I was beyond elated about this happening, because it gave me the opportunity to make a ridiculously big deal out of her.

She, too, was pretty thrilled.

Two weeks later, the tooth had taken on a Leaning Tower of Pisa stance, and was clearly hanging on by a single thread of nerve.

Having never pulled a tooth, I wasn’t sure where to begin.  So I did what I always do: I searched Amazon for the proper tool.

Tooth Pulling Pliers…surely someone has come up with the perfect gripping yanker.

But no.  Amazon had nothing of the sort.

We have Naked Baby Cake Moulds available to us, but Children have had teeth falling out for thousands of years and no one can invent a single tool to help the process out??

(If one of you could hurry up and invent one, it will be more popular than Elf on a Shelf.  And WAY more useful.)

So I moved on to Plan B: ask y’all on Facebook.

The immediate consensus was that a napkin provided the best solid grip.  I looked up from my phone – there was a napkin, sitting innocently on the coffee table in front of us, as if it already knew of it’s appointment with destiny.

This was my chance.

I asked Ali if she was ready.

“Just give me one shot today.”

Shocked at her sudden burst of bravery, I quickly grabbed the napkin, reached in, and popped it out.

No wonder there’s no tool – it’s that easy.

But Ali was not as impressed with my dental skills. 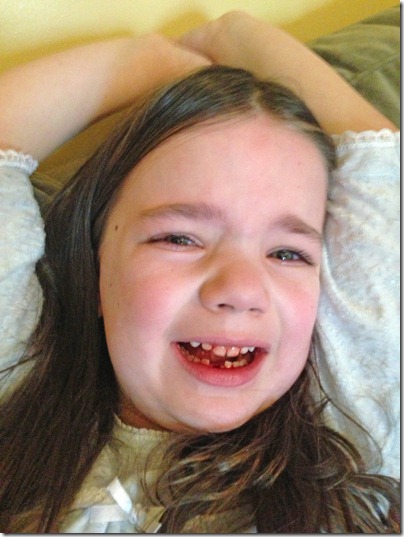 Was it cruel to take a photo in the midst of her pain and angst?

Possibly, but I come from a long line of cruel photographers. 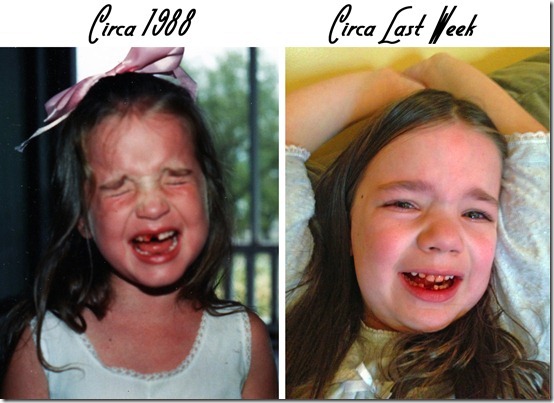 …and she comes from a long line of ugly criers.

But she perked up quickly, forgave me a few minutes later, and was ultimately thrilled with her loss. 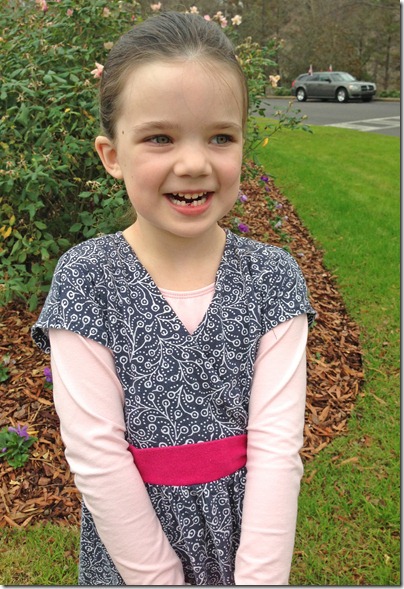 So, of course, we had to make the rounds of FaceTimes and Skypes to show off her new smile.

When she called Chris, he showed a due amount of Fatherly excitement, then asked,

“So what did Mommy bribe you with?”

“What does bribe mean?”

“Didn’t Mommy promise to give you something if you’d let her pull your tooth?”

Later, I thanked him for his confidence in my Motherly Persuasion Skills.

And then there was the matter of The Tooth Fairy.

She still refused to believe that the Tooth Fairy existed.

And despite my own misgivings about lying to my child, I had an inexplicable and seemingly innate need to get her to believe – even if just for a moment.

So I suggested that she put her tooth under her pillow – you know, just in case.  An experiment, some might call it.  For the good of humanity.

She got excited about being a Fairy Scientist and asked if she could immediately take a nap to see if she would come.

“No, sorry – the Tooth Fairy only works the night shift.”

And then she started bargaining about other facets of the upcoming exchange.  She wanted to keep her tooth in one of her many boxes of miscellaneous treasures, where I was confident that it would get lost beneath a piece of cardboard she found on the floor at Target and a “pretty” rock.

So I suggested another idea.

“How about this: why don’t you write the tooth fairy a letter and ask her if you can keep your tooth.  But instead of putting it in one of your treasure boxes, we can put it in Daddy’s Body Part Box.”

“Oh yes, your Father has a collection of all of our body parts.  He has my foot bone, your’s AND Noah’s rotten withered belly button stumps, hair from your first haircuts, and he even tried to keep my Gall Stones, but the doctor forgot to save them.”

“Oh.  Well that sounds like a PERFECT place for my tooth!”

And so, during her afternoon quiet time, she penned this work of literature: 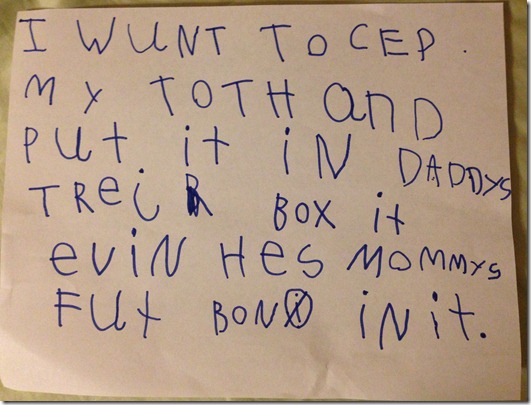 I bet the Tooth Fairy has never gotten a note quite like that.

After Ali’s bedtime, I spent the evening scouring Pinterest and strategizing about my brand new Fairy Role.  After giving up the idea of writing a tiny letter and somehow crafting a tiny stamp (thanks, Pinterest, for the inferiority complex,) I finally decided that I would leave her a full-sized note (and money) in response. 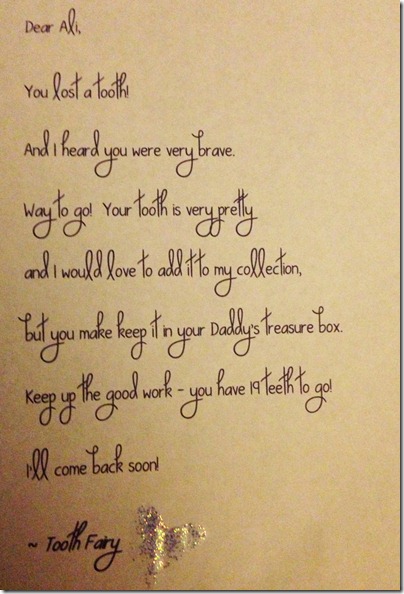 Oh yes – The Tooth Fairy did make a typo.  On her very first tooth excursion.

When I woke up the next morning, I went in to check on Ali’s belief system.

The note was unfolded and laying on her bed.

So I read it to her.  Then asked, “What do you think this sparkly stuff is at the end?  Do you think it’s pixie dust?”

But I could tell – she was storing all of these things in her heart.

And she might just believe – at least for a minute.