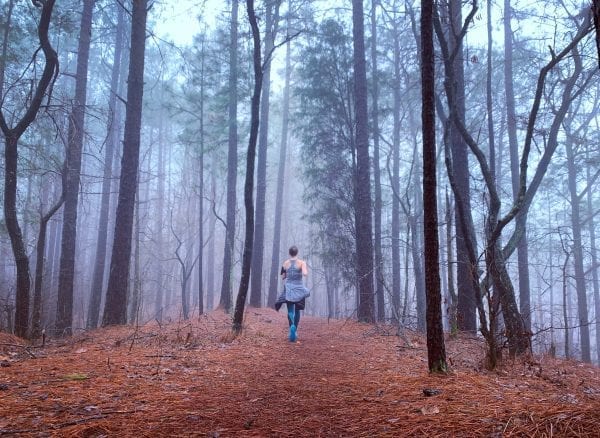 “Because you don’t want to be alone in the woods and run into some random guy with an axe….”

These are the things girls say jokingly to each other when setting out for a trail run together. However, I run in the woods alone fairly regularly, and when I do, my mantra is more like “So I’m out here in the woods all alone and haven’t seen anyone for miles and am starting to feel creeped out BUT what are the chances that the one person I do see is an axe murderer?”

Axes apparently play a big part into the worst-case-scenario imaginings of woods and women. And that’s just where axes are supposed to stay. IN OUR IMAGINATIONS.

Except for this one time.

My friend Christen and I were out for a trail run. We were enjoying a very nice, normal, and safe loop around a well-trodden lake at a local state park. We hadn’t seen many people out that day yet, but there were a few. It had been a quiet mile or two when we saw a guy ahead of us with two dogs. It was a single track trail, so he pulled off to the side with the dogs well before we approached, as is how it usually goes for the oft-followed “the slower person pulls off the trail” rule.

Except that he also felt the need to yell reassurances to us.

I’m not a fan of dogs, but I’m also not usually worried about them. I found his warning…odd. He had just finished his reassurances when I reached his bend in the trail.

…And I noticed that he was leaning on a waist-length handle. My eyes followed the large handle down to the ground…where I saw a nicely sharpened, shiny axe blade.

Because split second unexpected situations in life sometimes can make one speak before thinking, I immediately shot back, “I’m more worried about your axe than I am the dogs!”

He nudged it lightheartedly.

I am a fan of snakes, however, and quickly shot back again. .

“What?? Why would you kill snakes?? You can’t kill snakes! You’re in a State Park!!”

(Not to mention that he was also carrying a VIOLENT and (not-yet-)BLOODY FREAKING WEAPON in a State Park and SURELY this was NOT okay.)

He jovially said, “Oh, don’t worry, we just kill the poisonous ones.”

By this time we were 100 feet down the trail from him and the reality of my rather rash and impudent conversation was starting to sink in. Had I just argued with the very first axe-wielding man-in-the-woods I’d ever run into on a trail run?

Obviously if I run into a real axe murderer, it’s gonna go so very well.

Meanwhile, Christen was having her own personal crisis. She pulled up beside me, panting, and said,

“Oh my goodness I didn’t even notice that he had an axe until you said something. THIS IS WHY I CAN NEVER RUN ALONE.”

And then I heard him, not far off, whistling for one of his dogs…and I didn’t want to die for being a rat.

So I didn’t report him.

As we ran away from the bathrooms, he pulled alongside us in his truck.

Here it goes. Here we go.

“Y’all are making me just exhausted with all your running!!”

Yes, yes we are, sir. We’re clearly the problem here.

3 thoughts on “Things You Don’t Want to See In The Woods.”