We Callahans like Spelling Bees. There’s something so…objective about spelling, and yet so very challenging as well, because English is stupid. Every year at the beginning of the school year, I check the Scripps site daily for the release of the year’s list of 450 words. Because you can never be too early in starting your study process.

And process is exactly what we have. I call out the words, the kids spell them, I write down (twice) the words they miss – once in my notebook, and once in theirs. They rewrite and study from their notebooks, and I use my notebook the next day to review the words they missed, then call out another batch of words. At the beginning of the year, the process is taxing on me, because Noah is an agonizingly slow speller. So I leave myself plenty of margin for what I call Patience Doodles – a skill every homeschool parent needs in spades.

After five months of practice on the 450 words plus the extra word lists, it was time for the Homeschool County Spelling Bee. In Alabama, there are 67 counties – except when spelling bees are involved, in which there are 68. Each county has a county bee for public and private schools, but all homeschoolers in the state are shoved into Homeschool County.

(Which, as with previous years, I spent much time pondering what Homeschool County would look like, if it were an actual geographical location. So many Chick-Fil-As. The thrift stores are full of denim skirts from homeschool days past. The hair length is three times the national average. Every car has a CC sticker on it. And the entire county absolutely REEKS of Lavender and Thieves.)

This was the first bee we’d participated in that was on a Saturday, which meant that Chris would get his first experience as Spelling Bee Dad. I explained to him beforehand that though the bee starts at 1pm, expect a lengthy amount of time set aside for explaining the rules. It’s best to be prepared for such things, and as he told me later, about halfway through the rules, he was super glad I’d warned him.

One of the rules is about an appeal. It’s always given as an aside, with a “we really hardly ever need these, and I haven’t seen an appeal in years, but if you find yourself needing to make an appeal on behalf of your student, go to the back and get an appeal form.”

Every time she states this rule I have a picture in my mind of Appeal Mom. She’s a total stage mom, the kind that yells at the teacher when her kid gets into legitimate trouble, and who is always convinced that everyone is out to wrong her kid. I mentally shake my head at her obnoxious entitlement. Good thing she doesn’t exist in Homeschool County.

We began the bee. As always, I wrote down every word with my own legend attached to it. The only reason I do all of this paperwork is to keep my own jitters at bay, my hands from shaking, and my heart rate down. Writing soothes me and keeps my stomach from cramping when it’s time for my kid to spell again. Oh – and I mark the homonyms because I like playing the game “what in the world is a homonym to that word?” in my head. One must have coping mechanisms. 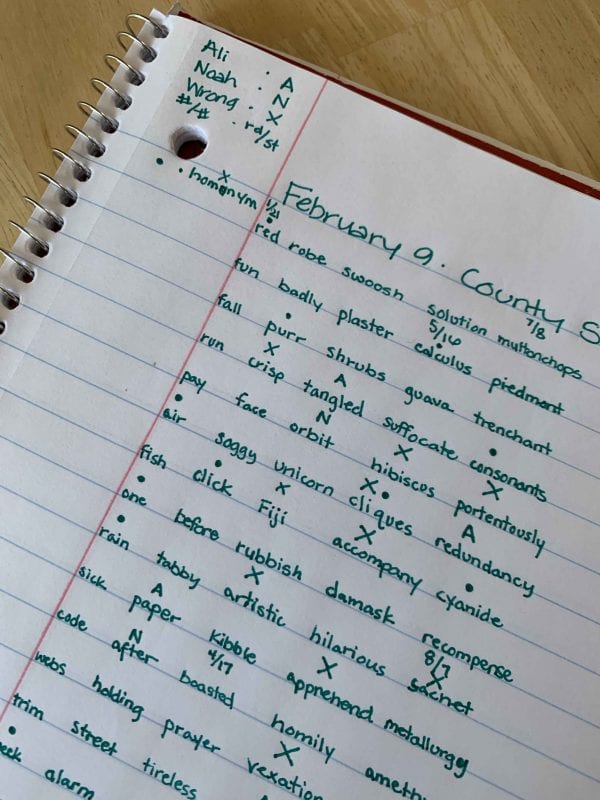 (Yes, I misspelled homonym the first time I wrote it on my legend. Yes, Chris caught it and giggled silently at me.)

Spelling bees are for first through eighth graders, all grades together. Noah, being in second grade, had only made it through studying the first 250 words. He spoke confidently and accurately, though, and was doing quite well. When it got to round five, I whispered to Chris “this is probably Noah’s last round.” But no – he spelled cardboard correctly, cheering me at the fact that he got as far as he possibly could have based on what he’d learned. As expected, he spelled out in the next round, came and sat down beside me and whispered “We never studied gangrene!!”

Ali was still going strong. She had memorized all 450 words, and had studied quite diligently into the extra word lists as well. But I was still nervous – because panic and accidental mistakes are easy to make.

By round nine, there were only six spellers left. When it was her turn, she was given the word tetrarch. My eyes widened. My brain began spinning. I definitely did not remember that word on the lists. And I could tell she didn’t either. She asked for the definition. She quietly thought. And, completely without surprise to me, she spelled it incorrectly – tetrark.

She came to sit down and I whispered, “Do you remember that word?” “No!”

I did a mental checklist of all of the other words in the round. All the other words were straight off the word list, right around the 400s. I scanned the 300s and 400s. There was no tetrarch.

I had Chris re-scan them. He couldn’t find tetrarch.

And, before I could consider my actions, I stood up and walked to the back of the room to get an appeal form.

The room let up an audible gasp. Or maybe it wasn’t audible. Maybe I just felt the mental gasp from everyone in the room.

Chris later admitted that he was shocked at my sudden turn into Appeal Mom, and had a Hamilton moment as he watched me gear up for my first duel…

I whispered to the official that tetrarch wasn’t on the word list, but we clearly weren’t “off-list” yet (what happens when the 450 words are used up), as all the other words that round had been on the word list – I knew since I wrote them all down. She agreed that I should fill out an appeal form.

I did, and at the end of round ten, the pronouncer called me up to see my appeal form. I explained. She did a search on her computer and showed me where tetrarch was: Word #408. There it was, right there, on her computer screen.

I walked back to my seat and pulled out my folder again, and they started up round eleven. I found the right page and began scanning.

And this is what I found: 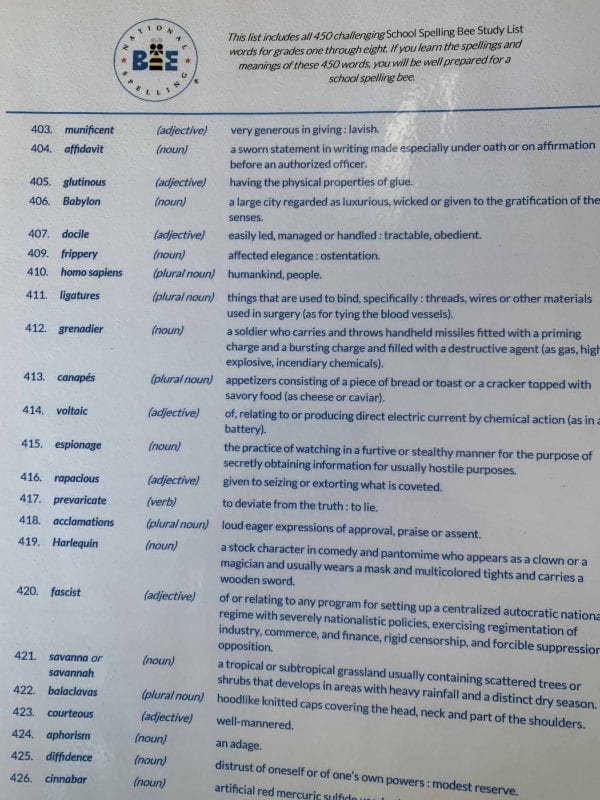 I DID NOT HAVE A WORD FOUR OH EIGHT.

It just was not there.

Without thinking, I stood up and walked to the back of the room. For an unprecedented, nay historic SECOND APPEAL.

I took my laminated word list with me. The official, as I was, was dumbfounded.

At the end of the eleventh round, upon seeing my Double Appeal Mom behavior, the pronouncer called for a ten minute break. The crush of guilt and shame at somehow becoming THAT mom overwhelmed me. So I very apologetically showed her my word sheet. She added herself to the count of dumbfounded individuals. I told her that I understood that too many rounds had gone by to let Ali back in, and would be fine with whatever they decided.

There was ten minutes of deliberation. Much discussion. Much look at that missing #408.

While we waited, Ali was both excited about being out and excited about being put back in, as she had a basketball game right after the spelling bee, and if she were out, she’d be on time. I asked, “Do you want me to go ahead and tell them not to worry with it? You can be done…” She looked at me like I was crazy. “NO WAY!!! I want back in if I can get in!!”

And they decided that, since this was a Scripps Spelling Bee and that clearly Scripps had made a mistake, Ali should be allowed back in – but that she had to spell two words correctly, for rounds ten and eleven, to earn her spot. They explained it very well to the whole crowd, so that there were no misunderstandings as to why they were making an exception to the rule. She finished up her explanation with “And if you have a problem with this, don’t bother to appeal – you can only appeal for your own speller.”

“No pressure, Ali. Are you ready?”

I sat on my hands.

She spelled her first word flawlessly.

This time, it was all my fault.

You see, I always look up the pronunciations of words that I don’t know, of which there are always plenty, like mille-feuille and recherché and netsuke. But if it’s a word I do know, and I’ve been pronouncing all my life, it doesn’t occur to me that I might be wrong. (And, for the record, I’m wrong a lot. So many words are “reading only” words and I find out years later that I’ve been saying them incorrectly in my head all my life.)

Her second word was Phaeton.

Go ahead – pronounce it mentally.

Did you pronounce it fay-TON?

The pronouncer pronounced it FAY-uh-tun.

I cursed myself for my mispronunciation.

I cursed myself for not telling Ali “Now, your mother is a serial mispronouncer. If anyone says a word you’ve never heard, search your memory for other spelling words that are KIND OF like it to see if perhaps your mother has mispronounced it wrong all her life.”

And, as expected, she did not spell it correctly.

So not only was I Double Appeal Mom, but I followed that up by being Hijacker of my Own Daughter’s Success Mom. If only there were a bee for that.

…Ali was just relieved that she made it through the Spelling Bee without any (of her own) dumb mistakes, and she made it to her basketball game happily free of Spelling Bee anxiety.
…I was relieved when our beloved Spelling Club leader, Miss Melissa, got home and immediately checked her own word lists and also found that she was missing Word #408.
…And next year, we’ll definitely use those Scripps recordings for ALL word pronunciations.
…Last night, Chris and I were watching a British Drama after bed. They referenced their fay-TON. I screamed “fay-TON!! fay-TON!!! I’m just British, you see!!!” – it did not help regain anyone’s Spelling Bee Glory, but it also didn’t wake up any children, so we’ll call it a win.

7 thoughts on “On Becoming a Spelling Bee Drama Queen.”