My exhaustion of hearing about the HP of every Pokemon ever created can be a heavy burden. And I grow weary of hearing the difference between GX and EX and Ultra and Mega and X. I languish from my child asking me for eBay searches and Amazon browsing for more and more and more Pokemon cards.

The power one wields when a child of questionable temperament falls hopelessly and completely in obsession with something is indeed a very, very effective power.

It is worth every banal conversation. Every. Last. One. Of. Them.

Noah is not a people pleaser like his sister before him. So I must find new and creative ways to constantly encourage him in the way he should go. Some things work, some things don’t. But nothing – NOTHING – nothing in the creation of everything has worked as blazingly efficiently as Pokemon Cards.

The first use that made my eyes light up with the power I now held had to do with dirty plates.

Noah has never, not once, picked up his dirty lunch plate or snack napkin or gummy wrapper and put them away without being told to do so.

No matter how many times I tried to tell him he needed to do it without me telling him, or offering him tickets to help him remember, or threatening consequences if he didn’t remember – it literally did not matter. He would not, could not remember to pick up his trash.

But then one day I told him if you don’t pick up your trash, I will take away two Pokemon cards. And the next day he didn’t pick up his trash. And I don’t think he had even conceived of how cruel I could possibly be until that moment. When I told him to go get his Pokemon book and I thumbed through, looking specifically for the cards he talked about the most.

I took two of his most precious cards. His Jumbo Snorlax GX and his Mega Charizard.

Since that day, at least a month ago, he has not left a single plate or piece of trash out after consuming food. Not one. He went from a .000 batting average to a 1.000. And, for the record, the consequences weren’t even permanent. I sprung Snorlax and Charizard from the slammer after a couple of days for good behavior, with the dire warning that next time, they would find a permanent home swimming with the fishies in the septic tank.

(Before we continue, I need to say something to Chris. No, dear, if you’re reading this, I would never *actually* flush Pokemon cards down the toilet. I know how you coddle our septic tank as if it were a colicky newborn baby. But I must add an appropriate amount of drama to my threats to be the loving, effective mother that you desire me to be.)

My second brilliantly evil use of Pokemon cards was to get my daily dose of exercise. I’d bought two junk boxes of random Pokemon cards off of Amazon a while back to use as prizes. I had so far used them as rewards in mental math contests between my children (turns out Noah is really good up in his head with math and can nearly compete with his four-year-older sister – when appropriately motivated), so I invented the most genius exercise game ever created for kids. WAY better than Nintendo Wii.

For every quarter mile you run without stopping* or complaining, you earn one Pokemon card.

* Up to five second walk breaks were permissable for road crossings and side stitches and such.

For every continuous mile you run, you get two bonus Pokemon cards, bringing the potential total Pokemon cards up to six earnable per mile.

I explained the rules to the kids. Noah shivered with excitement. Ali, who also enjoys Pokemon cards but doesn’t need as much motivation as her brother, was also excited to get something for something she’d do anyway. And probably secretly relished the opportunity to earn more than her brother, but she’s a people pleaser. She’d never say so.

The run was every bit as magical as I’d hoped.

Noah is usually complaining just for his own personal entertainment at the .2 mile mark. But this run, there was no complaining. None at all. The kid even got a wretched side stitch and DID NOT WHINE. He was leaning over while running, cramming his hand into his side, BECAUSE HE NEEDED THAT LAST POKEMON CARD.

Ali earned 19 cards. Noah earned 12. And they were both thrilled and freaking thankful that I had taken them on such an amazing run. And begged to have another one soon. 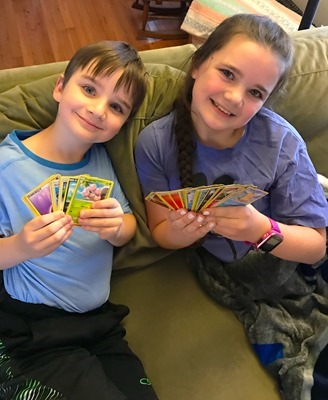 There is nothing like finding the currency that motivates a child. It’s as if I truly finally am in charge of my situation. I use Pokemon cards like they grow on trees now, and it’s worth every penny of all the money I send to Amazon.

So, mothers. So, fathers. I urge you. Find your currency.

5 thoughts on “Pokemon Is The Best Thing That Ever Happened To Me.”