In my thirty-six years on this planet, two things have completely eluded me: Jury Duty and Sourdough Starters.

Although not even being considered to sit on a John-Grisham-worthy international espionage trial did bother me, being left out of the sourdough club disturbed me at a more intrinsic level.

I was beginning to think that all of the sourdough starters in the whole world must have died between my childhood and my motherhood, because I remember my mom receiving, using, and eventually killing many starters, and in the in between, making fresh, hot, sourdough bread a semi-regular occurrence. Yet never had I ever even heard of one of my peers having a starter, and never had I ever been offered one myself. Perhaps my mother was actually an Infamous Sourdough Starter Serial Killer and my family had been put on a Don’t Share List. Or perhaps it was me. Not having the ability to produce fresh bread did lend me to feeling Imposter Syndrome at a deep level. I mean, was I even momming?

It was a painful quandary.

I wasn’t ready to tackle the issue of being ignored and/or avoided by the judicial system, but it was past time to address The Mystery of Dough. So in January, I posted this Instagram photo. 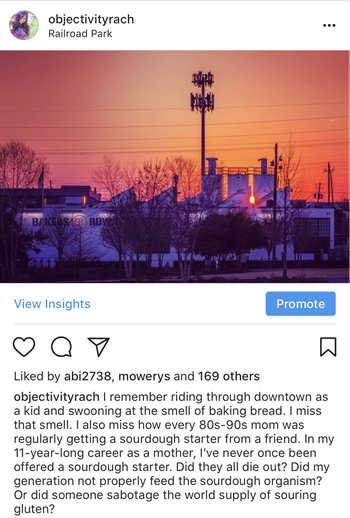 Within a day, I was offered not one, but two starters.

My life had finally begun.

I graciously accepted the starter from the person I would see the soonest. She brought it to me, in an insulated bag, at the Homeschool Spelling Bee. WHERE ALL STARTERS SHOULD EXCHANGE HANDS.

Melissa-The-Sourdough-Fairy gifted me with a large yogurt container with vents cut into the lid, along with a full 8 1/2 x 11 page of typed instructions. This page included a not-to-shabby pedigree for my starter, tracing its roots through two other homeschool moms and 12 years of shares.

And now I was the owner of this beautiful new baby.

I carefully carried it home, placing it gently in my cupholder and looking at it warily, wondering if it would spontaneously bubble out and fill my car. But when we arrived home, there was a present from Thomas-the-Porch-Cat on my welcome mat, as always. Except instead of the usual gag-inducing treats, it was a perfectly preserved chipmunk. I ran inside, placed my starter on the counter, grabbed my camera and props, and ran back out to play. After I appropriately memorialized the beautiful creature left behind just for me, I moved on with my day, extremely satisfied.

That night, when Chris got home, I proudly showed him my starter. I explained to the children my severely limited knowledge of how it worked (thinking, at the time, that I sounded like a seasoned expert), which was the exact point in time that I remembered that it was brought to the spelling bee in an insulated bag. CLEARLY I was supposed to put it in the refrigerator when I got home and now all these hours had passed because I let a chipmunk distract me and oh my goodness did I just kill my first starter before I even produced a single loaf? Maybe serial starter killing does run in my family what have I done!!

Chris, though an eager eater of all homemade goodness, laughed. Then comforted me with the words, “If you killed your sourdough starter because you were too busy staging roadkill, I will love you for that. We’re more of a roadkill homeschool family than a bread-making homeschool family.”

I did some frantic Googling and discovered that all was okay – I’d likely just made my yeast more hungry, it was hard to kill a starter, and it would probably prove itself to be alive the first time I fed it.

I quickly refrigerated it, and fed it as soon as my instruction pamphlet allowed. It happily ate the food, grew, and then grew into a lovely dough upon mixing. 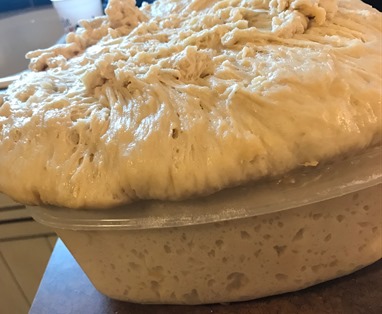 I made my first ever sourdough loaves, and finally felt like a Real Housewife of The Deep South. 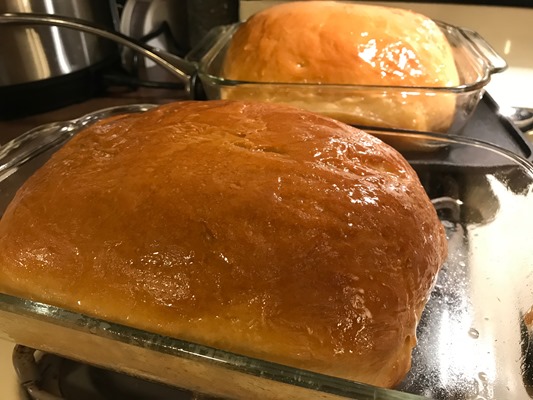 Regardless of his feelings about what kind of homeschool family we are, my husband was incandescently happy with the hot fresh bread slathered in freshly mixed honey butter (or butter honey, as Noah prefers it to be called) that I had coming out of the oven as he walked in the door from a wet run. 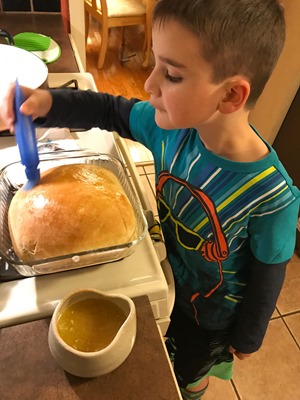 As the weeks passed and the successful loaves stacked up, I became obsessed with my little pet, reading more about what a starter really is, and even buying the new novel, Sourdough, which only deepened my understanding and unhealthy adoration of my starter. I have since been going around explaining to everyone what starters are and how they work.

Because you see. There are wild yeasts floating all around us. And you catch them and create a starter by leaving out flour and water for a week, feeding it more flour and water and taking some out. The wild yeasts are all like “Well, honey, doesn’t that look like a delicious home!” and set up a colony in your paste. Furthermore, Wild Yeasts like to travel with their BFFs, good bacteria, and those guys are super protective of their yeasty friends. So they guard their new encampment, refusing entry to bad bacteria, gross mold, or other things that might want a crack at your lovely flour and water.

(Except if I tried this, The Porch Cat would, with certainty, vomit directly into the starter, and no good bacteria can hold that sturdy a stronghold.)

It’s a genius system, clearly proving that God wants us eating bread. And people have been catching these wild yeasts for 5,000 years. So OBVIOUSLY, Sourdough is Paleo.

THEN, the wild yeast feast on the gluten of the flour, supposedly (though I haven’t had a gluten-sensitive test subject yet) making the end product gluten free. Because they pre-digest the gluten for you, turning it into gases which make your bread rise and create those lovely sourdough air pockets in your finished product. So apparently, wild yeasts are also gluten sensitive, because it gives them the worst gas.

As I became more and more intrigued by my paleo, gluten-free, basically-a-vegetable bread made for me by an entire microbial universe, I found myself perhaps in an unhealthy existential relationship with my bread. Because that’s normal, right? I pondered their civilization, their families, their lives, and hoped that when I cooked one cup of them, they’d sent me the penal colony of yeasts – perhaps the ones that had committed yeasty crimes were the ones in my measuring cup. It was like olden Australia, but the penalty for your crimes was being baked into a loaf. Because otherwise I was baking my chefs and eating my artisan breadmakers. It was all very confusing. But that didn’t stop me from making the world’s best hamburger between my dead pets. 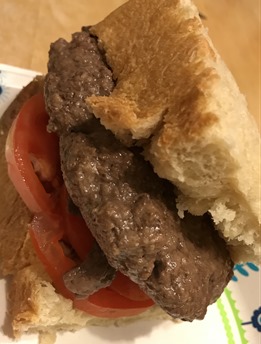 Meanwhile, I was making multiple loaves every week, and instead of a January Whole 30, we had a January Dough 30, and let me tell you – it’s a much more delightful way to spend that miserable month. 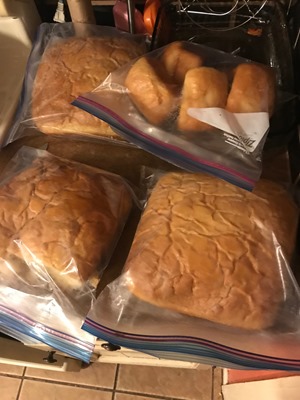 I spread my loaves around to friends and family as best I could, although I must say it was difficult – there were multiple times that I was going to take a loaf to someone who had a death in the family or a sick child, only to remember at the last minute that they were gluten-free, or paleo, or on a ketone diet, or some other such limiting factor. I felt like getting all loud and Oprah-ish and in some faces about HOW AWESOME BREAD IS, but I didn’t. I just kept my bread and quietly ate another slice slathered in butter honey.

I even made three varieties of Stromboli with my dough, which had been for a long time one of Chris’ favorite creations from my mom (although she made it with regular bread, since she long ago murdered her sourdough starters.) Now I really felt like I had arrived in wifedom. 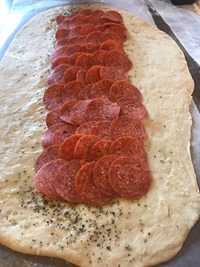 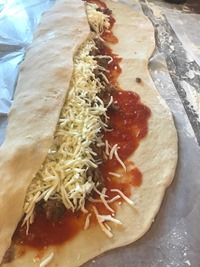 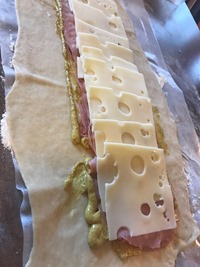 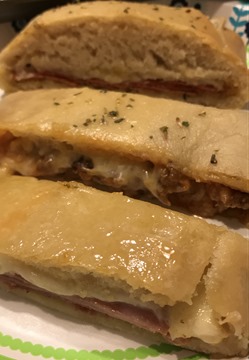 Then my wild yeasts had a baby. (i.e. I fed them but then didn’t feel good and so didn’t make dough.) If you do this, you’re supposed to throw away a cup of starter to make them think you made dough, but although I can bake my tiny friends, I cannot just dump them down the drain to live out their existence in the septic tank. Talk about a penal colony. Septic tank wild yeasts are definitely the kind of colony that will rise up through the drainpipes, riding on steeds of poop, and drown you in your sleep.

So instead, I made a baby.

I took an old sour cream container, cut vents in the lid, and made a new starter. Then I messaged my small group. 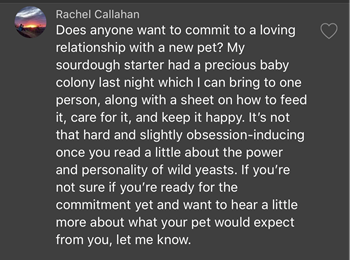 Nikki was the chosen new owner of my fresh baby yeast puppy.

I took the bundle of joy to her with a copy of my sheet of instructions/family tree. I am positive that when Nikki got home that night, she did not get distracted by roadkill and mistreat her puppy. However, I did check in with her the next morning to see how he slept his first night in his new home, and she told me that he was great, he’d slept well, and that she’d named him Yeastopher.

That’s right. Clearly Nikki deserves a wild yeast universe more than I. It had not, until that moment, occurred to me to name mine.

Naturally, I spent all day pondering the possibilities, and finally settled on Kanyeast. Pronounced (so you won’t be embarrassed if you ever find yourself addressing my yeast family,) as con-YAYst. Then I updated my feeding log to show my true love for my Yeast Puppy Colony Universe. 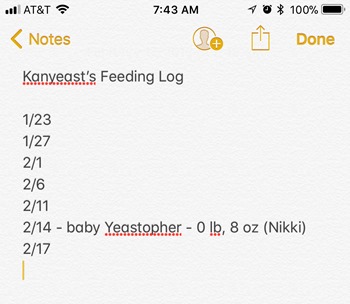 8 thoughts on “An Education of the Wild Yeasts.”