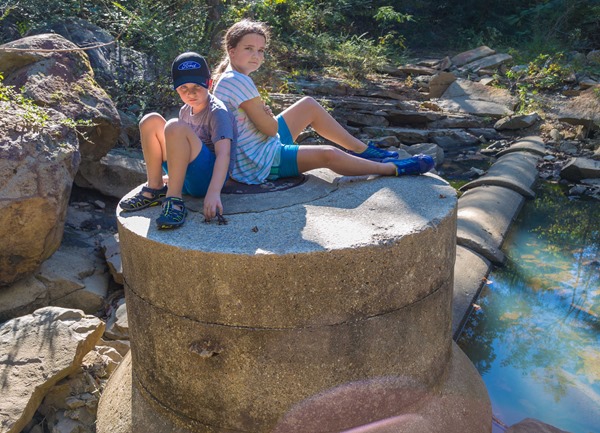 My children, particularly the youngest, have a propensity to whine when I tell them we’re going on a hike, which is a once or twice a week occurrence, especially in the fall. But forced hiking is the mother of invention, and my children are never as brilliant as they are when the mood hits them to turn a hike into a video game.

They created their favorite game a while back, titled “Super Bonus Power-Up”, but last week they advanced and perfected it so drastically that it deserves recording. So that all children in all the world can learn to enjoy forced hikes.

In the past, this game has consisted on them running up to trees, slapping them, and saying “Super Bonus Power-Up!” to get extra energy for the hike. Using a rather rudimentary version of Parkour, they would bounce off the trees, therefore giving them the magical feeling of being more energetic.

But the Super Super Bonus Power-Up game really amps up the imagination volume.

Here’s how to play.

First, determine what recurring trail markers and features are available.

On this particular hike (our first time to hike the beautiful trails at Turkey Creek Nature Preserve), the children noticed that there were blazes, or trail markers, 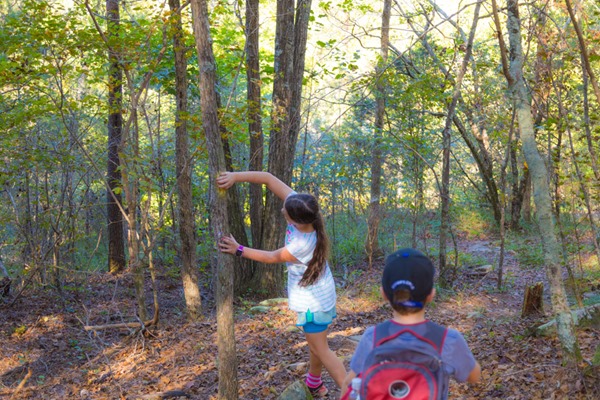 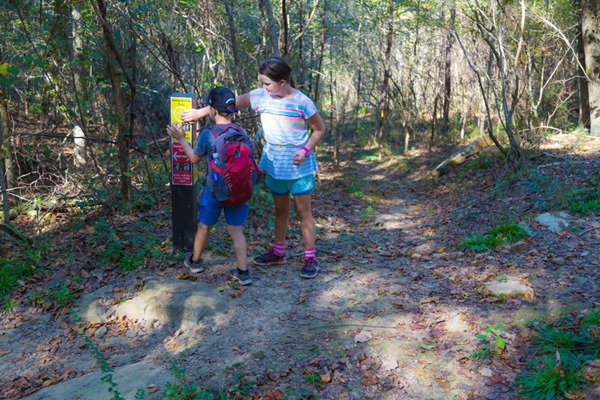 And an extra special and unique trail find, diamond signs that seemed to not have much use except to greatly add to our game. 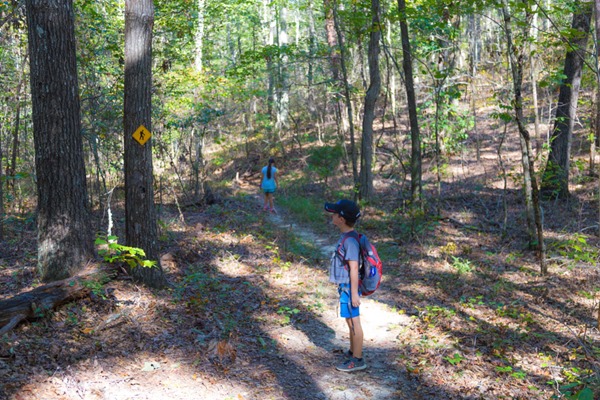 Are they to let bears know that the delicacy of hikers are available in this area? No one knows.

The blazes replaced trees for energy boosts – no longer could any old tree give you a power-up – you had to slap a blaze.

The signposts were extra super power-ups – because obviously.

(It was so Mario up in there.) 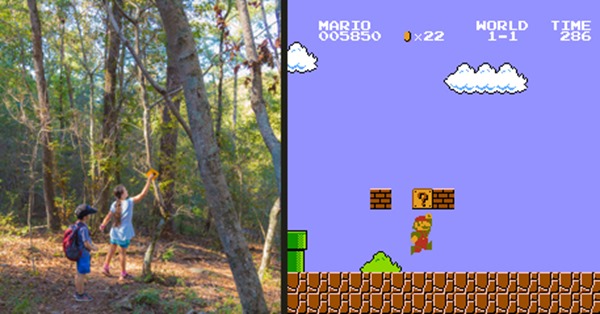 Mystery boxes were extra valuable – too valuable even to fully comprehend.

Me: “What’d you get in your mystery box?”

Noah realized he couldn’t reach all the Mystery Boxes, so he began collecting large acorns, or, as he told me, Bombs. Throwing bombs at a mystery box multiplied the amount of mystery treasures you could receive. This created the need to stop every now and then as he counted slowly to ten while throwing acorns at the poor sign, but totally worth it.

(He did try once to throw a bomb at his sister to slow her down, but she quickly clarified that bomb-to-other-player combat was DEFINITIVELY against the rules.)

So then he tried The Force. 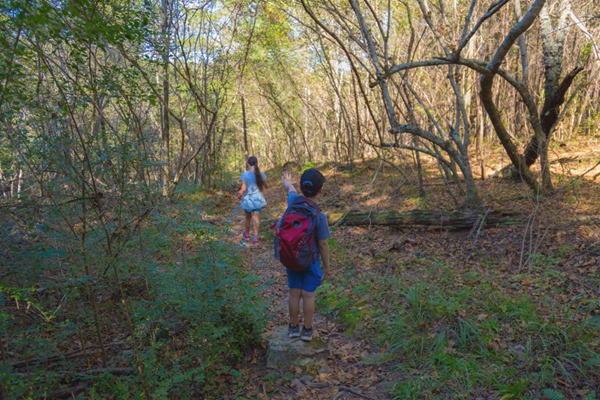 But she seemed immune, I’m sure due to her superior gaming morals. 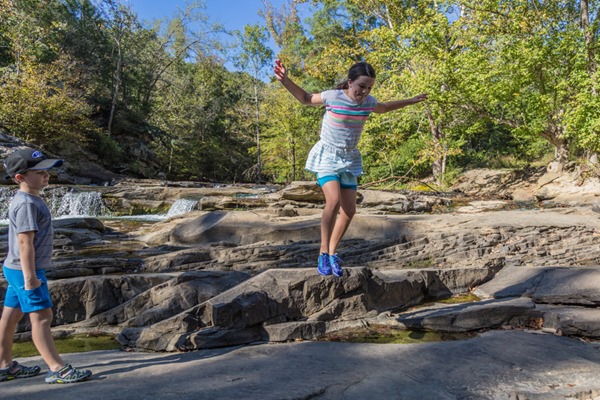 For this particular hike, I further forced them to carry the backpack of snacks and water (as I was carrying my camera backpack.) They swapped it every half a mile. To incorporate it into the game, Noah named it the “Ten Pound Slowdown.” It’s a rough penalty, but you just have to roll with it. 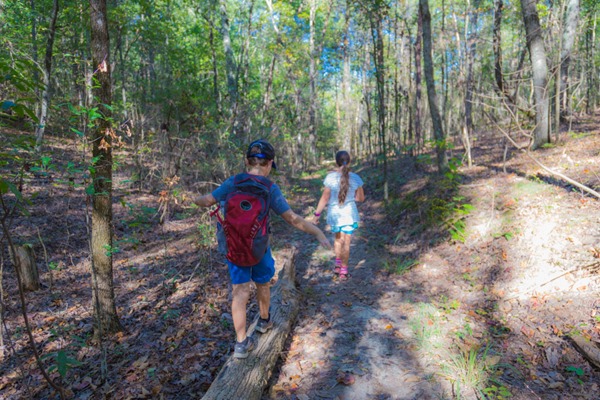 We made it to the top of the hill, where we found a lovely pollinator garden in which to have our snacks and water. 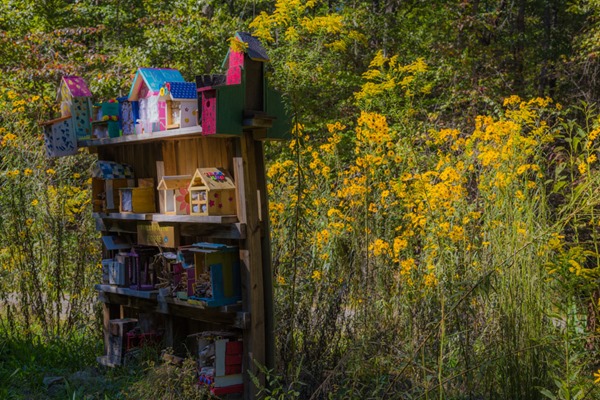 (And for me to stop and take a few pictures – my own personal favorite hiking game.) 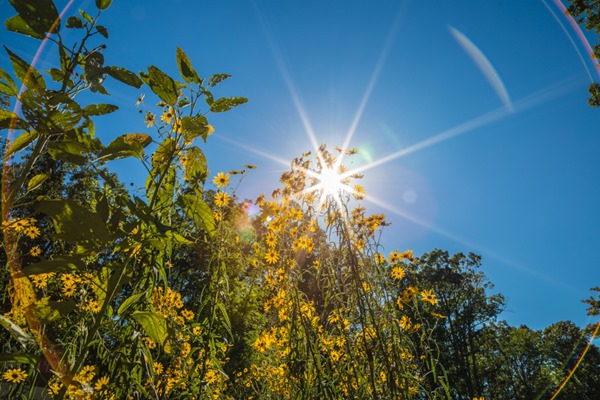 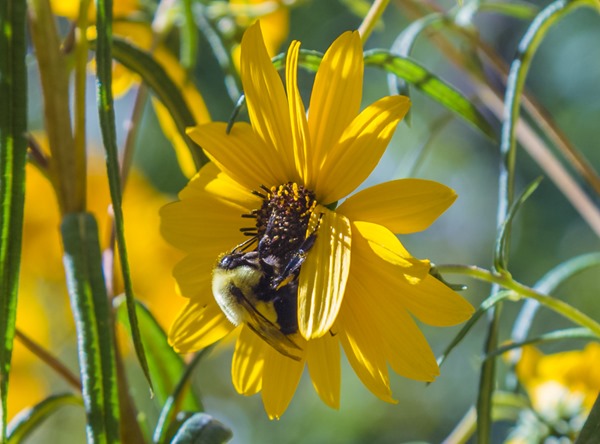 After our snack and drinking of most of the water, Noah jubilantly exclaimed “The Ten Pound Slowdown just got reduced to the Two Pound Slowdown!!”

Talk about raising your experience points – everyone loves it when they earn lighter armor.

Their game became so fantastic that they both thanked me multiple times for me bringing them on the hike, and were shocked at how fast it had gone by.

But pictures don’t do their enthusiasm justice. Here’s a bit of terrible video I made for my Instagram Story that day, including a slo-mo stomping of a particularly power-draining puffball mushroom.

So. If your kids need help turning their video games into actual reality (or if you do – because who among us didn’t dream of entering into our Nintendo games??), my children are available as trainers and counselors. But if you ask them to take you on a hike, expect at least a little whining on the front end. 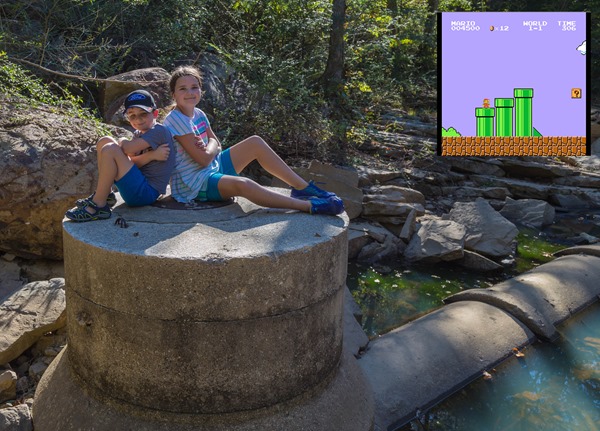 3 thoughts on “The Secret Life of a Happy Hiking Heart.”