I regularly struggle about this blog. Besides the fact that blogging is a dead art, I have less to write about than when my kids were tiny, I have less time (thanks, kids, for not napping anymore), I have more varied interests that take up my time (running, hiking, photography, reading), and it’s harder for me to write well. Late at night when I can’t sleep and anxiety attacks me in random ways, I sometimes decide to quit writing. But the next morning, I always change my mind. And a chief cause of that is relationships.

I have made hundreds of friends through writing, in dozens of states and quite a few countries. I have met scores of these people in real life, and many of my good friends came from blogging. These bonds were formed because we, for many various reasons, have things in common. We view life out of the same lens (sorry if your lens is as sarcastic and cynical as mine.) We can relate. Because somehow – via comments or social media or emails exchanged in the middle of the night, we connected. We made an impact on each other’s lives simply through the exchanged written word.

This is why I still write. Not as often, not as well-crafted. But I write.

This past week was a reminder of the beauty of this blogging side effect.

A blog reader, who googled “Plus sized blue jeans” and found me half a decade ago when she lived in the jungles of Mozambique, came to visit me last week – for the second time. And she brought her husband along this time – who, for some bizarre reason, agreed to come stay with strangers for six days.

Now back to being residents in their home country of Canada, Rick and Heather are (clearly) the adventurous sort, and as such, we did all the things while they were here.

We greeted them at the front door, and they seemed happy to have arrived… 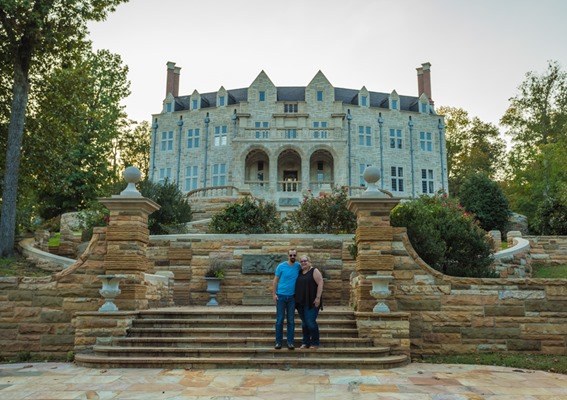 Okay no we didn’t try and convince them that this was our house. But it would’ve been exceedingly fun to send them this address and wait for the texts to come in.

Back to what we DID do.

Heather wanted to meet all the people in Birmingham that I’ve “introduced” her to via the internet. So we started with lunch with Katherine of Grass Stains fame. (We tried to get Jamie to join us as well, but she was attacked by an October cold.)

We didn’t manage to get a picture with Katherine at our delightful lunch, but we did, however, find time to take multiple photos of the bathroom.

Because – who knew? The old Federal Reserve building downtown (where our lunch date at Urban Standard was located) turned the old vault into the bathrooms. 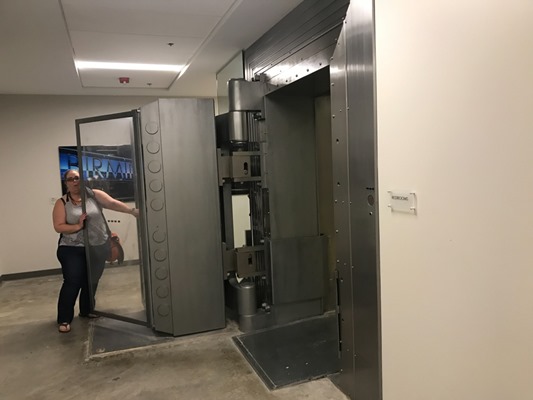 Talk about needing to make a deposit. 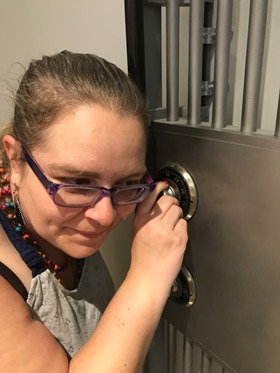 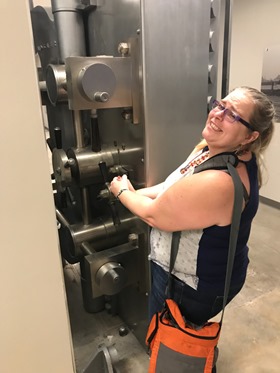 Since, on their trip down, Rick and Heather stopped at the biggest everything that they could find (you can see Heather’s Instagram feed for evidence of that), I took her to the OLDEST things. 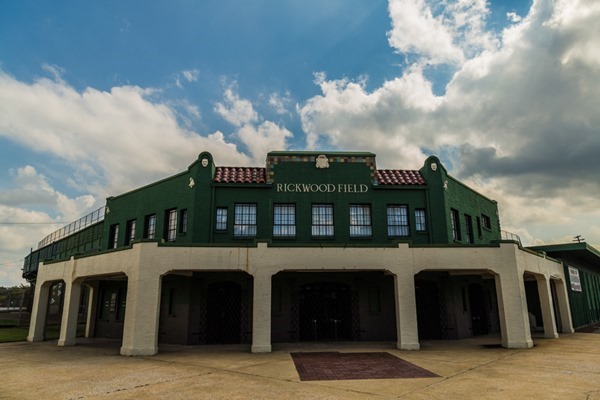 The oldest castle in Birmingham (Quinlan Castle, built in 1927 – you know because we have so many castles), 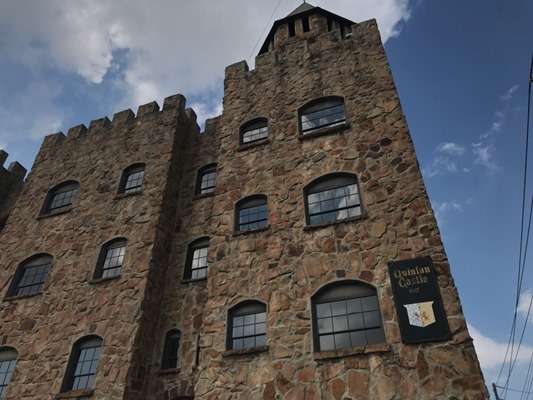 The oldest Giant Amazon Box in Birmingham (okay there are a few others and I have no idea which was built first but they’ve been around for like a week or three), 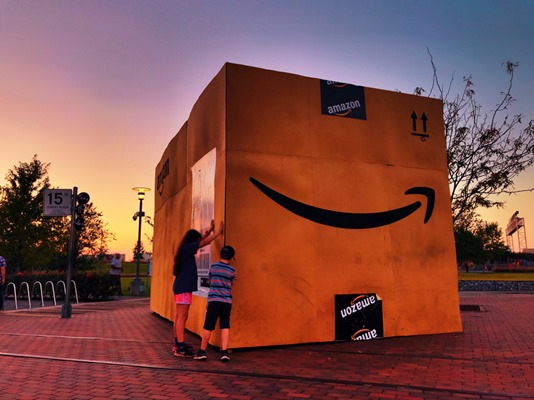 The oldest selfie-angel-wings in Birmingham (they’re not quite a year old yet but aren’t they fabulous?) 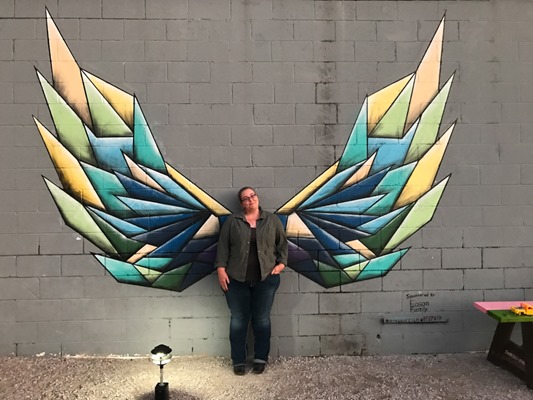 And the oldest cannon pointed at downtown Birmingham. 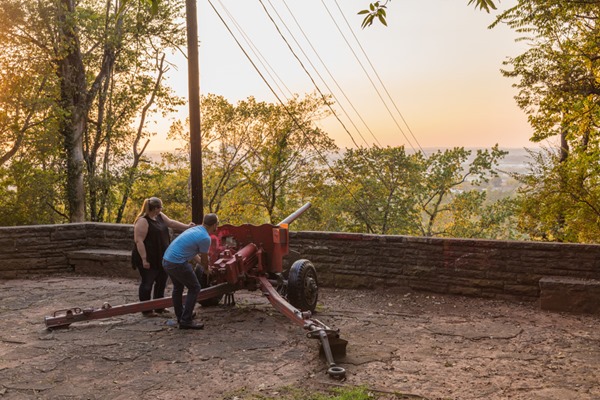 We also visited some of the best Birmingham restaurants (Nabeel’s and John’s City Diner) and fantastic Birmingham signage nearby, 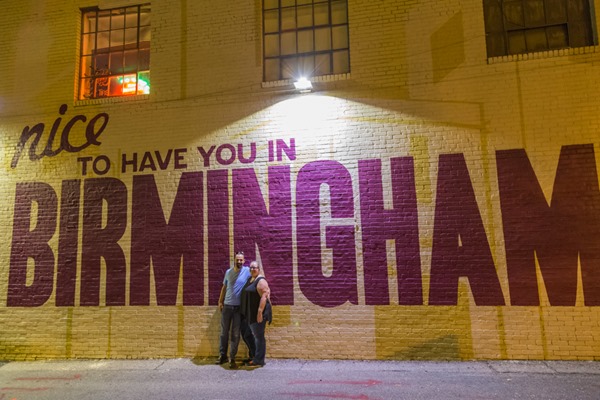 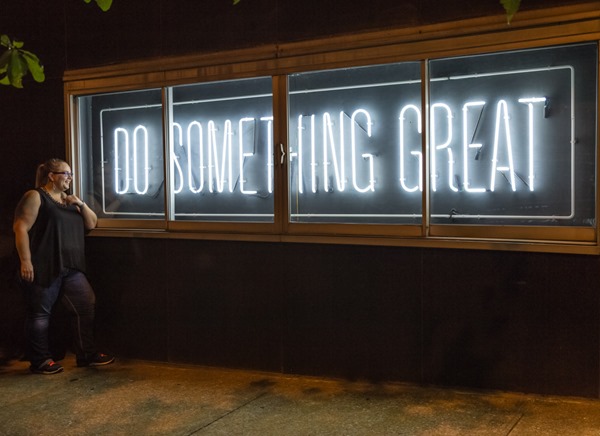 Along with the Light Tunnels, 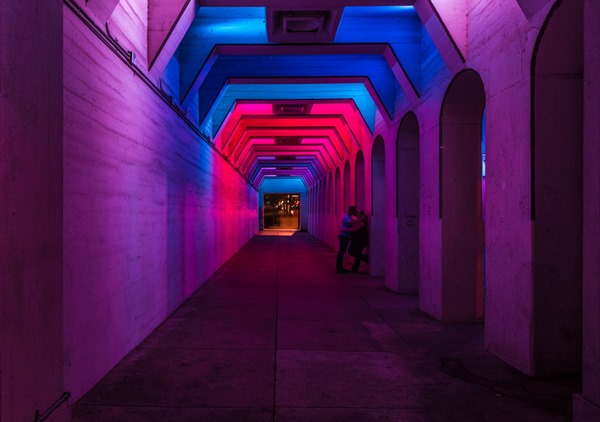 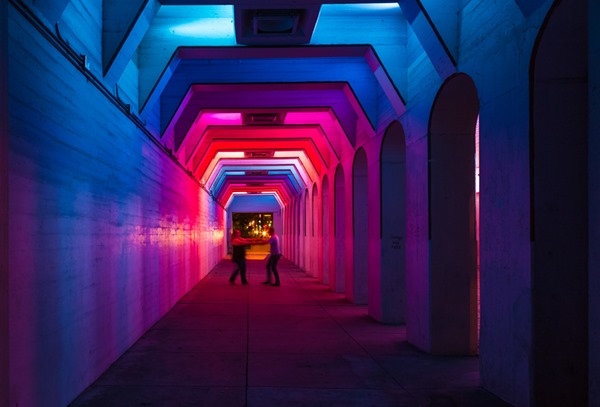 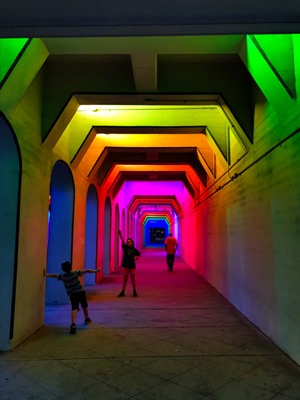 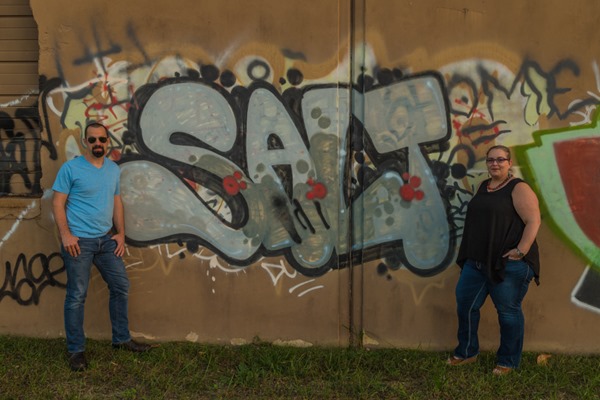 And OBVIOUSLY the sunset. 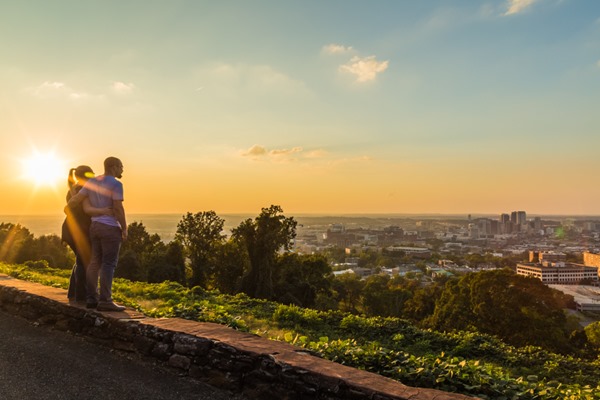 It was basically a Birmingham Second Honeymoon. With tour guides.

Because Heather found such fabulous deals last time she visited, we took another trip to Unclaimed Baggage, a couple of hours away – where all unclaimed baggage of all the airlines ends up.

I hung out in the books section for most of our visit, because I discovered that all paperbacks are $1.49-1.99 and hardbacks are $2.99 (and people read REALLY GREAT books on planes). I bought about 15 books, so I’m set for a few days.

I also reprised my small group girl’s trip tradition of finding the most unsafe pair of heels and trying to stand in them. 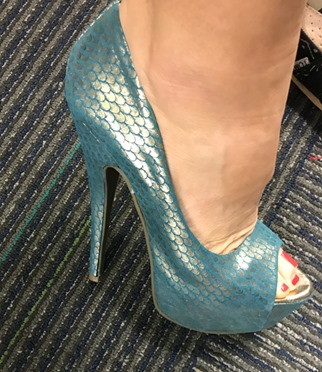 I do not exaggerate when I say that I almost broke myself. And I only put one of the shoes on.

Heather’s husband, Rick, was surprisingly cool with all this – even the shopping trip, where he found himself the hottest vintage Baywatch jacket in all the land. 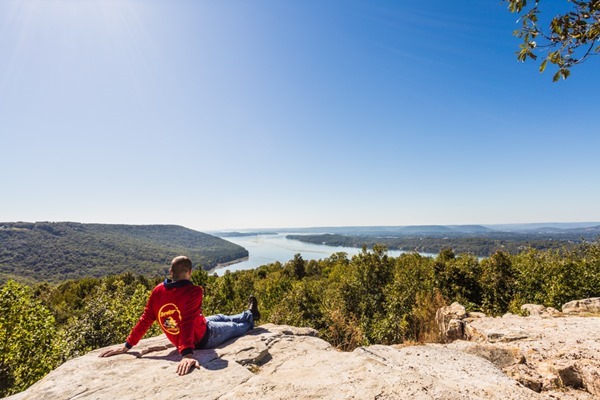 Did I mention he’s a pastor? He’s going to look so fabulous preaching in his Baywatch gear.

Rick did find the need to DO something, which led him to begging us for access to our chain saw (to cut down a tree that fell through our trampoline during what was left of Hurricane Nate), putting together a “some assembly required” storage box I’d ordered from Amazon, and also I came home one day to my dryer taken apart because apparently, cleaning the lint filter doesn’t get all the lint out. (Who knew?) In his spare time, he made things like this with my children: 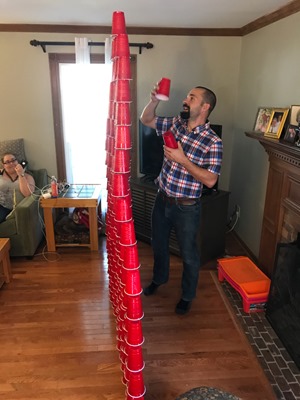 But what they REALLY came for… 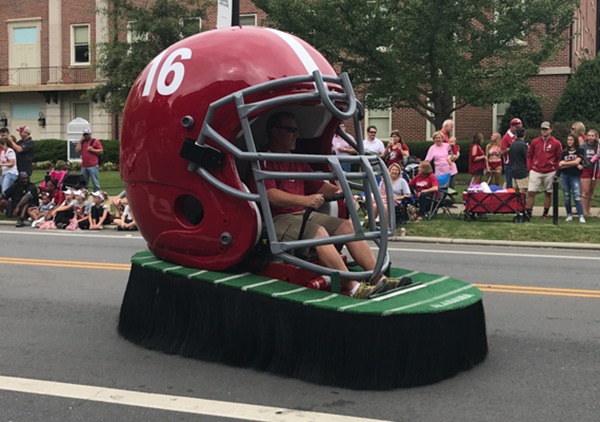 To see the things our state celebrates so thoroughly, like an elephant taking a poop on a Beetle. 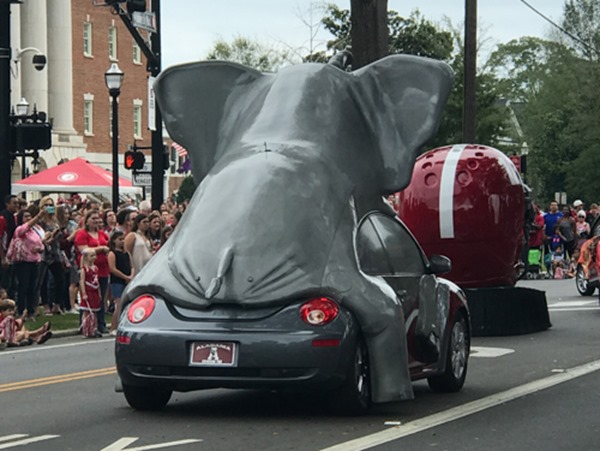 To see what we do with our excess tissue paper. 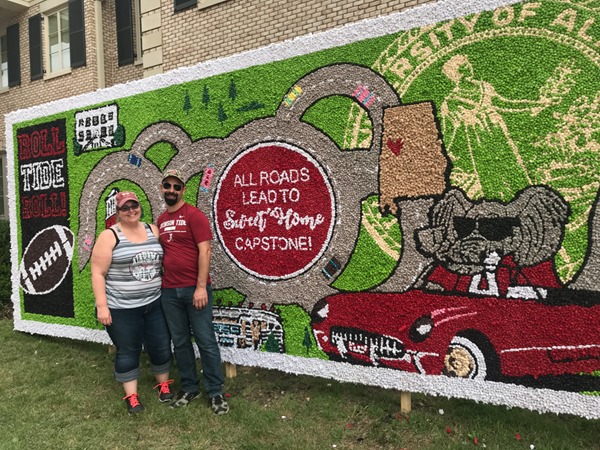 And most importantly, to see Alabama Gameday Fashion at its absolute finest.

We saw it all. Multiple men changing clothes in public, ladies wearing scarves as shirts, all manner of visible bras (and visible oh-well-would-you-look-at-that-she’s-not-wearing-a-bra), and tutus. SO MANY tutus.

Heather said, more than once, and I quote, 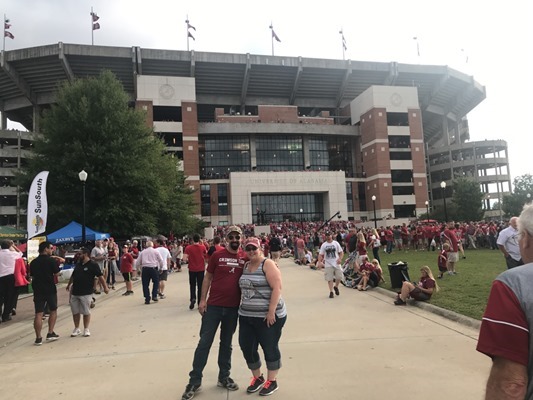 Because Alabama. That’s why.

We made it into the game, where the culture continued to pour out onto us – this time in the form of significant back sweat of the man sitting in front of – and leaning onto – our row. 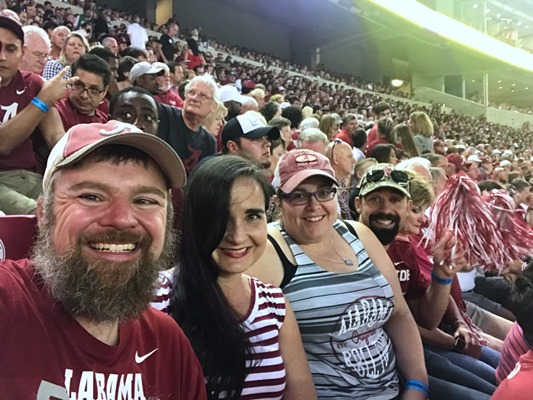 The back which provided the artisan Alabama perspiration can be seen leaning on Rick’s legs.

We had six days of all the adventure and experience and oddities that Alabama could offer. Which was absolutely delightful.

…As was this Introvert’s ICU ward that I entered upon their departure. 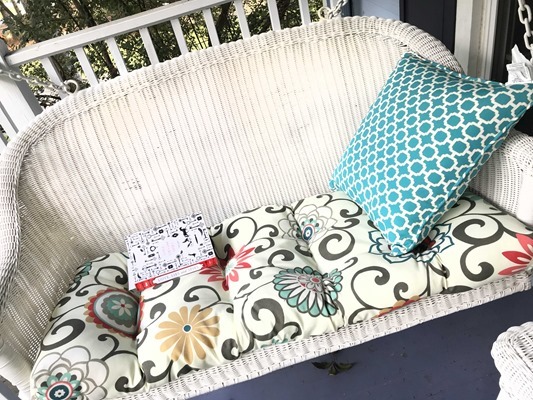 7 thoughts on “Blogging: May Cause International Friendship.”