I am aware and annoyed that the world tends to hate on new things as they come along, picking apart all of the potential dangers and drawbacks before anyone has had a chance to even try them.

Remember when Pokemon Go came out? All the news stories were about people walking over cliffs or wrecking cars (or the possibilities of those things potentially happening) rather than the fact that an entire people group just emerged from their video-game-playing-basements and were all of a sudden getting loads of exercise and Vitamin D and even human interaction.

(I still marvel at the shocking paleness I witnessed those first few weeks when Pokemon Go was THE THING. I’m pretty sure some of those people had never visited outdoor parks in their lives before said parks contained Snorlaxes and Squirtles.)

The 80s in particular were full of this judge-first hobby – especially in Southern Christian circles. The Smurfs were satanic. Dungeons and Dragons was double satanic. Yoga would turn you into a new age witch. And speaking of witches, don’t forget about Stevie Nicks because she was totally a witch. Oh and now that we’re talking about music, any song played backwards will tell you to worship Satan (did you know that Congress actually held hearings on this issue??) And DO NOT read the clouds in “Aladdin” or look at the cover of “The Little Mermaid” or YOU WILL SEE THINGS.

It even carried over to the 90s when Harry Potter was the echelon of all things Satanic. Too far, too far.

I find this outlook endlessly pessimistic and more-than-a-bit off-putting and am seriously happy that the 80s are over. As such, I always try to give things a good, hard, first try before identifying their potential downsides. Why not look for the benefits of new ideas rather than the drawbacks?

Since the moment they emerged in an explosion of fad and frenzy, I have DETESTED fidget spinners.

I abhor the quiet, smoothly fizzing sound when other people use them around me (“isn’t this a No Fidget Spinning section of this restaurant? No? Please seat me in the No Fidget Spinning section – I’m allergic.”) and I am disgusted by the feeling of them spinning around on the top of my own finger, and I despise them spinning between my thumb and index finger. They literally make me shiver with horror. They give me the total heebs. And actual chill bumps.

Of course, every member of my family with the exception of myself owns and regularly carries one of these horrible devices. Including my husband. Even though he conceal carries, it grosses me out just knowing that vile thing is in his pocket.

Before he realized my intense repulsion by The Fidget Spinner, Chris came home one night with a surprise for me and each of the kids. He played it up, acting like he was the best in all the world (which he is. Or was, until this night.)

After presenting the children with thrilling trinkets for which they hugged him and thanked him profusely, he finally pulled out my surprise – and as I’m sure you’ve already figured out, it was a fidget spinner. But not just any bland old fidget spinner – it was a fidget spinner printed with graffiti, and therefore he looked at me expectantly, happy that he’d hit upon one of my many and varied interests. 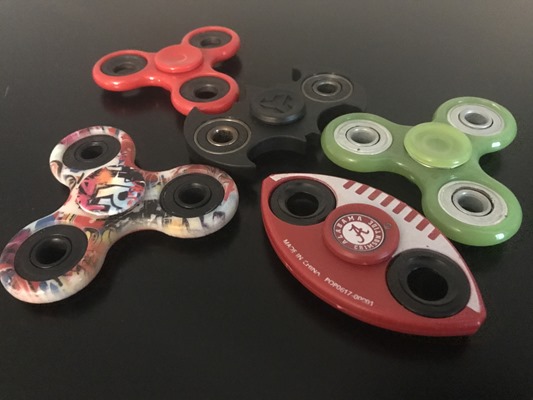 “My” Fidget Spinner is the one on the far left. Though I would never claim such vileness as mine.

I’m pretty good at faking thankfulness for gifts I’m not thrilled about, but my complete enmity toward these items made me recoil and scream out “EW! I can’t stand Fidget Spinners!” and push it across the table as if it were a box full of hissing cockroaches.

His face fell and I immediately felt bad. And both kids began begging for my rejected gift.

“You could have at least pretended to like it and told me later so that I didn’t have to figure out which kid to give it to.”

I apologized profusely, but stayed vigilant in my absolute refusal of his inappropriate gift.

(It later got used as bribery to get Noah to behave for like three whole days and was totally worth it.)

(Poor Ali. If only she required more bribery, she too could own more fidget spinners.)

Although Ali and Chris are moderate enthusiasts, Noah has become a collector of Fidget Spinners and Widget Spinners (what he calls the two-sided ones) of all sizes. He pines after them and begs me to search Amazon for newly released ones. I do not demonize these pursuits (at least out loud), even though I cringe with thought of the sound of yet another softly spinning object in my house. Instead, I press on, supporting my family and even my son’s horrific obsession.

Even though fidget spinners just have to be Satanic.

5 thoughts on “When Being an Early Adopter Spins Out.”