Noah had gone to the front porch to feed the neighborhood cat that is known at our address as Thomas.

(Thomas has many names – many more than we probably even know. He works the feline benefits system well, just as his predecessor Fred, ingratiating himself to (or guilting handily) all of the neighborhood in order to eat as many meals as possible.)

(Back to the grasshopper here – not Thomas. Follow my train of thought, people!)

Based on where Noah was standing – right in front of the door – I knew the grasshopper had to have been a special delivery from Thomas himself. A thoughtful gift for us in exchange for our feeding efforts.

But we were doing school and I had no time to inspect my gift at that moment.

We found ourselves on the porch later in the day, doing our read-aloud and other subjects that we do as a group. Somehow I’d missed, yet again, properly appreciating this gift, so Noah picked him up on a leaf and brought him to me to inspect.

The lovely Grasshopper was confined to his side, clearly having lost one of his jumping legs and bleeding a brownish liquid from his Thorax. 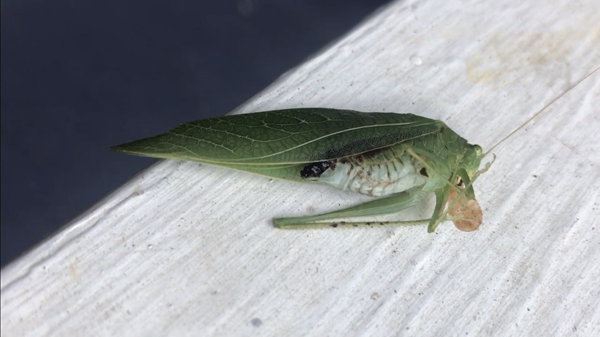 He looked at me imploringly, while focusing on his labored, slow breaths. It was almost as if I could hear his thoughts.

My dear lady, I apologize for the predicament in which I find myself. It appears your cat has made the attempt to make a gift of me. I hope you find me a worthy gift, but it is rather inconvenient that I am mortally wounded.

It was just terrible. I didn’t have the heart to tell him it’s not even my cat.

I am personally not nearly offended enough by Thomas’ outright-dead gifts – in fact, I have memorialized more than one: 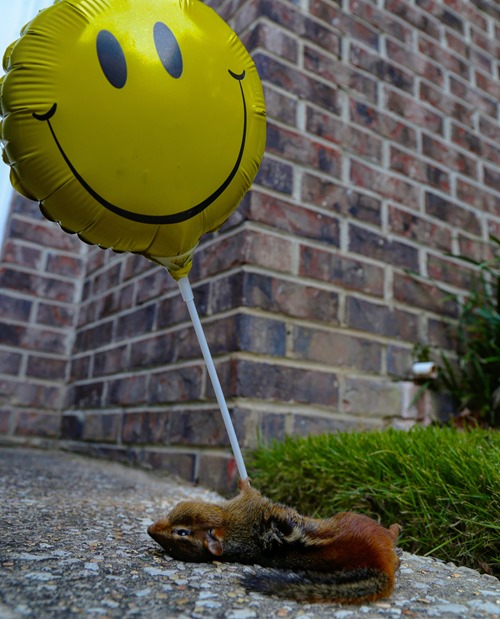 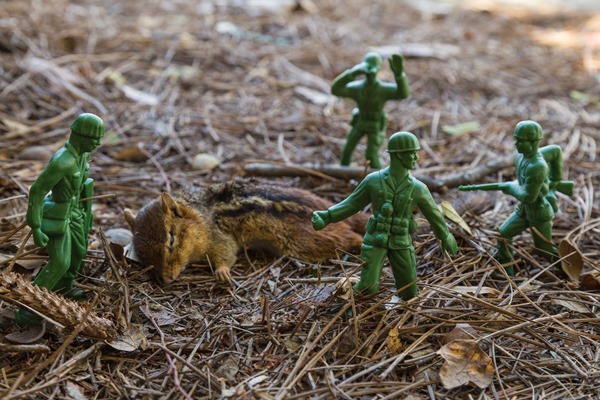 But there was something about this nearly dead gift that broke my heart. I just wasn’t sure what to do. Maybe he would recover somewhat, and slink away to heal – or maybe not.

Ah, my lady, I would love nothing more than to ease your discomfort by dragging my damaged exoskeleton into the bushes and die in peace, but alas, my limbs do not appear to be useful at the present time. Perhaps you could –

But we had school to do.

I do hope that Mr. Grassy enjoyed the reading of a chapter of “The Incorrigibles of Ashton Place”, and then a chapter in our Chemistry and Physics textbook. I ruminated over the possibility that at least, in his last moments of life, he could increase his knowledge and understanding of the cruel world that had murdered him.

Fascinating, So the electrons revolve around the nucleus? Who knew?

By the end of the reading, his breathing was even more painful to watch. More labored, more heaving. You could nearly hear him gasping and groaning. And he now lay in a small pool of his own bodily fluids.

It is most unfortunate, madam, that due to the physics of your cat, my personal chemistry is leaking onto your porch. I am most embarrassed. Perhaps now might be a good time to –

So I texted Chris for moral guidance. 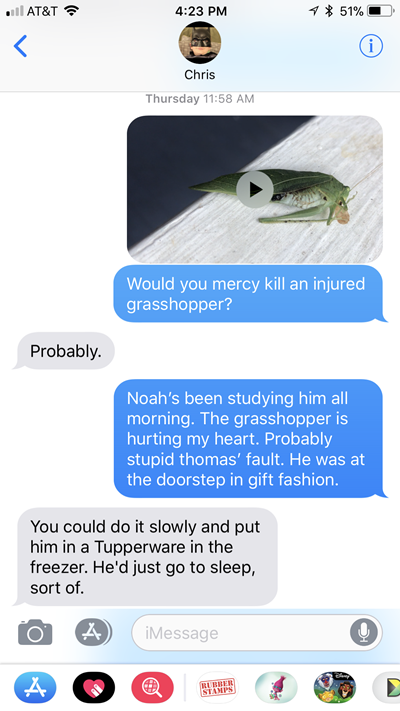 Chris has always been a freeze-er. Anytime he finds large spiders, he captures them carefully in my Tupperware and puts them in my freezer. Something about the violent crunching of stepping on a living being is more than he can handle.

(Obviously I draw the line at cockroaches entering my freezer. So he’s a flush-er of those.)

I am not a freeze-er. I find this somehow more cruel. Or at least me thinking about that gasping Grasshopper becoming colder and colder in his last moments was too much for me.

I wanted him to go out with his new education, not wishing he had a scarf.

Oh, thank you. I do hate to impose, but it would be most helpful if you could end this unfortunate situation.

So I folded him up in a piece of paper, added two leaves in for a further wall between him and my foot, took him out to the sidewalk (as Noah tailed me, asking if Grasshoppers go to heaven and how do I KNOW they don’t have souls?!?), and I stepped on him.

I picked up the paper and peeked in.

HE WAS STILL MOVING.

MADAM, this is most unhelpful. I am trying to maintain my dignity and composure, but this is quite unpleasant. Could you PLEASE try again?

This was the worst execution I’d ever been a part of. I felt sick, evil, and an all around persecutor of grasshoppers.

I quickly sat down the paper and thoroughly ensured his death.

The next time I fed Thomas I made sure to tell him to please be sure and leave only completely dead things in the future.

Well, if I was really your cat, you might get better gifts. Kiss my tail.

9 thoughts on “The Death of a Grasshopper.”