I don’t talk about Dysautonomia at length here very often, because frankly, I find it annoying. Same for running – I run nearly every day, but I just don’t find running a very interesting subject to talk about. I like running a huge deal. It makes me feel better. I put one foot in front of the other thousands of times in a row. What more is there to say?

(A LOT, according to all the running groups I’m in. I should really work on being more interesting.)

Dysautonomia is also something that is a part of every single day for me. This June will mark four years since I very suddenly began experiencing this very stupid disease, and I’ve come to look at it as something that I have to just work on, every single day. I can’t just leave it as is, or it will get worse. I can’t just keep doing what I’ve been doing to help it, because things quit working. I have to constantly tweak, analyze, research, try new things, and WORK at feeling decent enough to function.

A few things I’ve found in the past year that help are:

1. Tailwind (less weird than it sounds)
2. Cutting out sugar
3. Very controlled moderation of caffeine (one dose in the morning, one in the afternoon, not allowing them to be too close together)
4. IVs of saline and vitamins.

Yes, Dysautonomia is so fantastically annoying that I’m willing to voluntarily get large, straw-like needles jabbed into me twice a month. And I’d do it every day if I could. 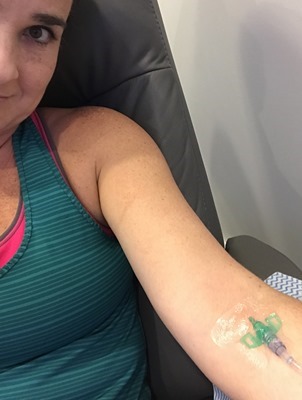 I’ve known for a long time that IV fluids can significantly aid Dysautonomia sufferers, but I wasn’t into paying a $150 ER co-pay to try it out for myself. And you can’t just walk into CVS and ask them to hook you up. However, we have recently acquired a clinic in Birmingham that provides much-less-expensive-than-the-ER private pay IV treatments with a full menu of groovy vitamin choices to add to your IV bag.

I went once, then immediately signed up for their 12 month package to achieve discounted rates and two treatments a month.

The IV makes me immediately feel like Wonder Woman after a long weekend and lots of sleep (I usually try to go run immediately afterwards because I have the BEST runs of my life that are almost worth writing about.) The saline ecstasy lasts for a few days.

But the real ecstasy comes from what you might get to overhear at the clinic.

The rooms are are outfitted with giant, cushy, recliners and have the privacy of a curtain over the doorway. So if someone else happens in around the same time, you might get the privilege of hearing their life story.

Usually they’re boring, like mine. “I have dysautonomia. I was feeling very blacky-outy.” And the occasional man bringing in his great-great-great-granddad. “He was sick, and now he’s really weak.”

But the other day, we all finally got something to talk about.

I was halfway through my treatment when someone else came in. He sounded brusque, businesslike, and commanding. He spelled his first and last name at least three times while they were trying to pull up his account. He had no patience for how long it took to type his name.

As he was walking past my curtain, I heard him begin, voluntarily and quite casually, to explain why he was there.

“I do a LOT of drugs. I travel for work, and you gotta do what you gotta do, you know? When I’m at the clinic in Atlanta, they’ll give me three IV bags at once. Is that something you can do?”

“Uh…no…the most we’ve ever done for one person is two bags at a time.”

Two bags at a time? I did not know this was a possibility. Isn’t one enough? Apparently not if you’ve done a LOT of drugs.

They put him in the room across the hall from me – I can only assume for my entertainment. He proceeded to explain that he’d traveled a lot this week, then partied for three days straight. And also…he couldn’t pee.

“If I came back tomorrow, could I get two more bags of fluid?”

Holy cow this guy wants four bags of fluids in two days. AND HE CANNOT PEE. And to think I was feeling bad getting two bags a month.

Nurse sounded skeptical again. “Well…I mean…I guess you could…but you really need to give the vitamins and minerals a chance to work their way through your body. If you still can’t urinate after these two bags of fluid…maybe come back tomorrow.”

If you still can’t pee after getting 2000ml of saline and vitamins pumped into your body, I think you might need to go to an actual hospital. The body can only hold so much fluid, right?? I mean. RIGHT??

But he seemed unconcerned. This whole organ-failure-by-three-day-party seemed like something he was accustomed to experiencing. He casually explained that he was pretty sure four bags of IV fluids would definitely jump start his bodily functions again.

The nurse came back in my room to unhook me. My single little IV bag was done, and so I mourned the ending of my audio entertainment.

I whispered to the nurse. “Sounds like I’m the boring patient today.”

She giggled. “I know, right??” She told me that she hoped I felt better. I told her I was thankful for guys that do a lot of drugs. Because there aren’t enough Dysautonomia sufferers in Birmingham to justify the existence of this clinic, so they’re totally subsidizing the demand for my legitimate medical needs. And keeping me entertained while I receive it.

10 thoughts on “What You Hear While Getting Needled.”