We’ve been on our annual double-family vacation, during which I took a writing hiatus. I’m still gathering and editing my photos from the trip, but here are a couple of stories from my favorite moments.

The Ghosterhood of the Traveling Skirt. 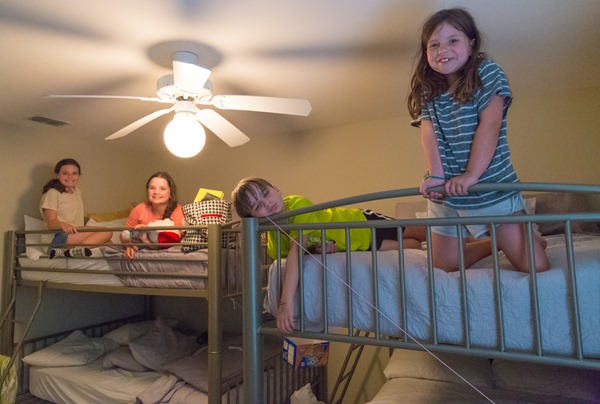 All four kids shared a bunk room for the first time this year. It was the most generous bunkroom I’ve ever seen – two sets of double-bedded bunks. I was somewhat afraid that Noah would be a hindrance in this arrangement – either not letting the others go to sleep, or being in general boyish and naggy. But he was not. He fell asleep instantaneously every night and slept deeply, never waking up in the middle of the night.

Except for that one night.

Noah awoke to go to the bathroom at 4am. And some strange things occurred. Strange things for which he was very anxious to tell me about the next morning…

”I can’t go up the stairs to your bedroom anymore because when I woke up in the middle of the night, I saw a teal skirt floating at the bottom of the stairs! It was just hanging there – floating!!!!”

Ali: “Yeah! He said it was just like mine and AJ’s swim skirts!” 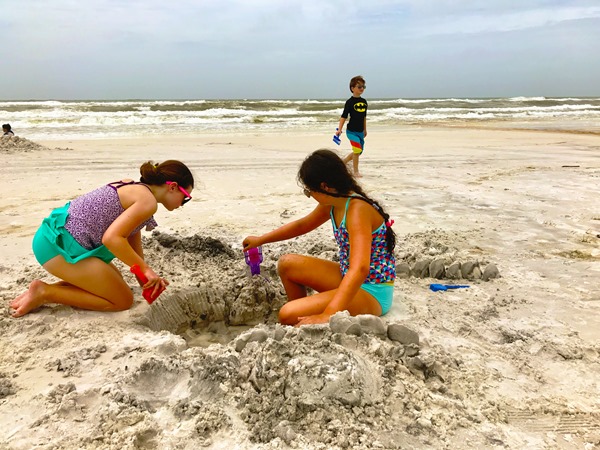 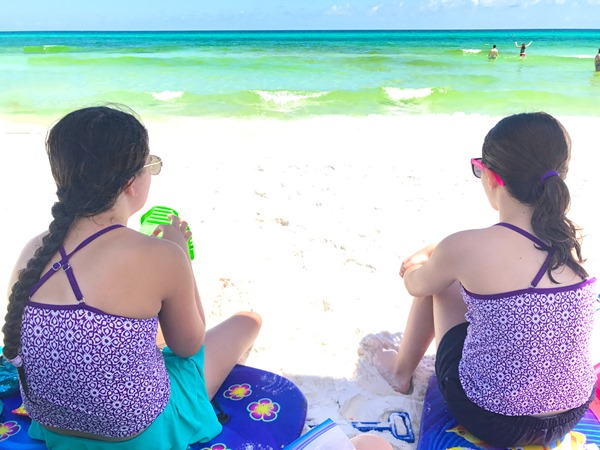 Tessa: “He woke me up because he was going through the suitcase and throwing clothes out and GASPING!”

Throwing clothes around and gasping, y’all. At 4am. Naturally, I found all of this extraordinarily amusing (only because all children went back to sleep after The Skirt Situation), but Noah was quite serious. There had FOR SURE been a floating teal skirt and it was certain that STRANGE THINGS were going down in this house. Apparently the suitcase rummaging had been his attempts to find Ali’s teal skirt – and gasping when he couldn’t find it.

(It was in my room hanging up to dry, but I suppose could’ve floated down the stairs…)

The mystery was thrown around all morning, us trying to convince Noah that he had probably just been half asleep or maybe even sleepwalking.

The older two girls asked gigglingly if they could prank Noah with other ghostly occurrences. We assured them that no good could come out of that plan, so no – no more ghosts were necessary.

Ashley (AJ and Tessa’s mom) mentioned that she’d heard someone get up to go to the bathroom, but missed the rest of the commotion.

Then I looked at Ashley’s shorts…and a theory began to form in my mind.

“Wait a minute. Did you sleep in those shorts?”

“And…did you open your bedroom door and look out when you heard someone get up to go to the bathroom?”

SHE WAS WEARING TEAL SHORTS. That were very flowy – just like a skirt.

I informed Noah that he had seen Ashley’s bottom half in the dark (her room was at the foot of the stairs he was now terrified of), and had associated it with the swimsuits the older girls had worn the day before. And we all laughed that there had, actually, been a Teal Skirt(ish) Situation after all.

Noah was insistent that this is not what had happened. It was NOT shorts and it HAD been floating. But by the end of the day, Ashley somehow convinced him.

“Maybe strange things aren’t happening in this house after all…”, he surmised.

And I kinda felt like this whole ordeal was payback for him ghosting me with my keypad a couple weeks ago.

The frogs were deafening at night. There were multiple lakes and swamps and ponds and puddles near our rental house, and therefore were significantly more frogs per square mile than humans. Tree frogs and bullfrogs were most plentiful – I caught one of each to hold (and to allow them to pee on me.) (Frogs get such joy from peeing on me, and I consider it the price of the thrill of holding a frog.)

The day after the first wave of rain from the tropical storm (more about that later), the kids finally caught a break and were able to go swim in the pool. (Certainly not the ocean – double red flags were in abundance.)

The neighborhood pool was always in possession of some leftover toys or floats from the neighbors, so it makes perfect sense that, upon seeing a large frog-shaped shadow on the bottom of the deep end of the pool, the kids assumed it was a dive toy.

They quickly added doubts to the mix and decided that instead of diving down and picking it up, they’d dive down and investigate.

I was pretty sure it was not, in fact, a dive toy.

After a few unsuccessful kid missions, I got the giant pool net. 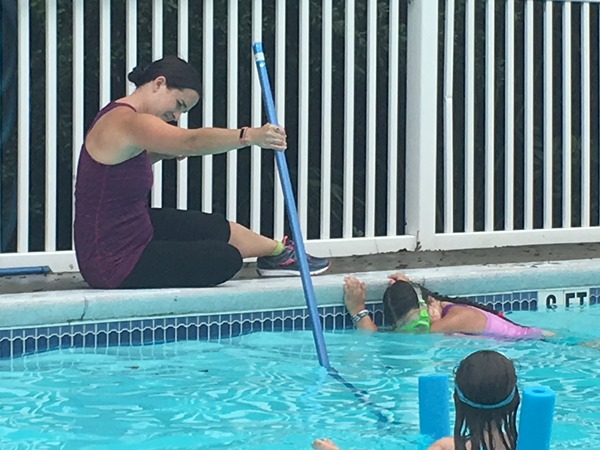 They all crowded around as I went fishing for a giant dead bullfrog. 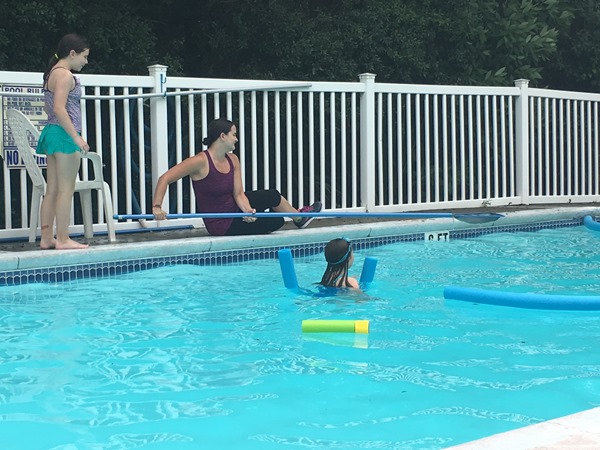 I pulled him up, and everyone took a moment of silence for the sad frog (who was accidentally not included in the photo of his funeral. Or maybe not accidentally. Corpse selfies are, after all, bad form.) 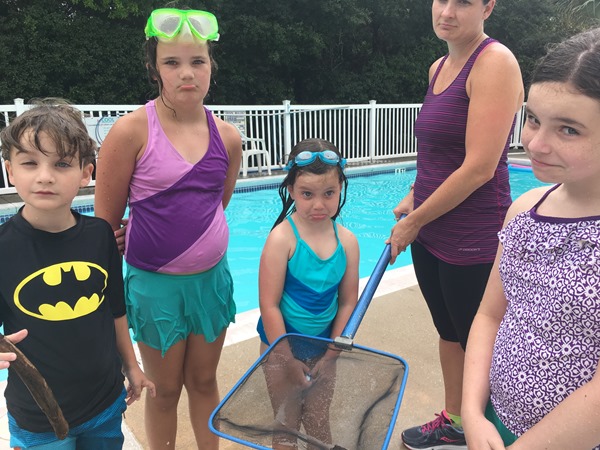 Then I carefully posed him on a beach chair for his last photo, memorializing him forever. As one does. 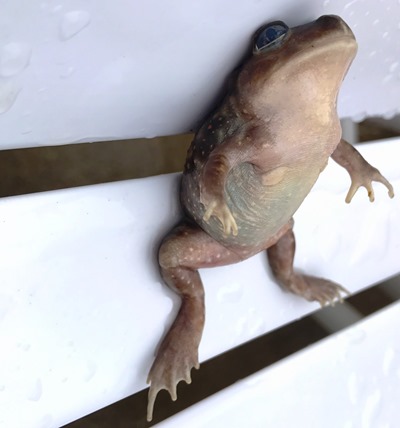 That feeling when you go to the beach on vacation and your arch-nemesis {Tropical Storm} Cindy follows you there.

But the most important educational moment of this trip is when I realized that bull frogs apparently have saggy man boobs. 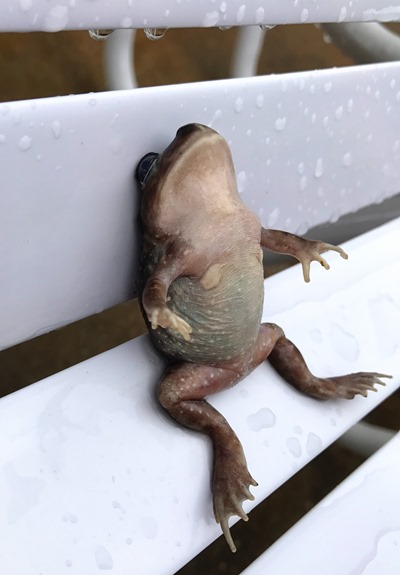 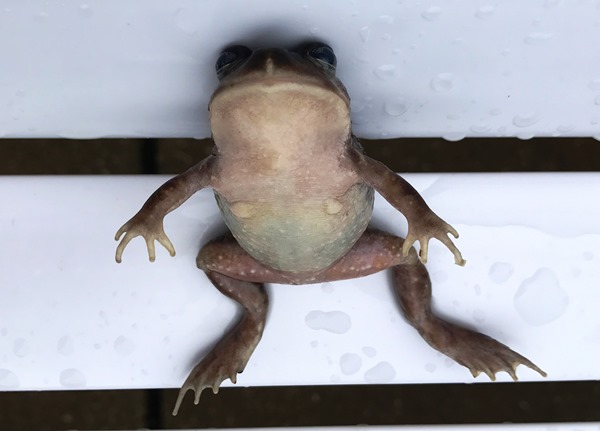 The next day, after Wave Number Two of Tropical Storm rains, there was another bullfrog – an even bigger bullfrog – swimming desperately in the out-of-order hot tub. I was able to rescue him as well – but this time, before death. 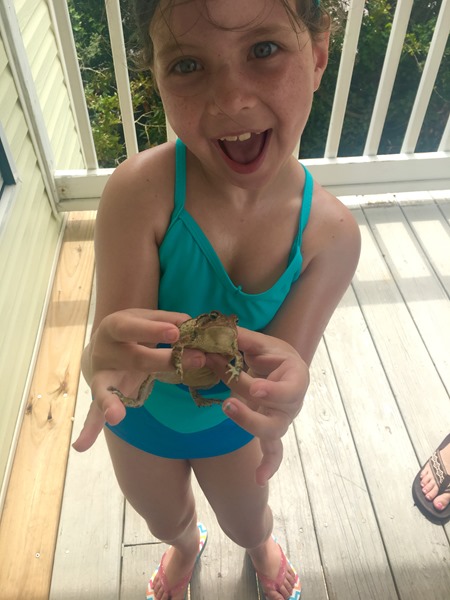 As his facial expression implies, he was eternally grateful for my efforts.

3 thoughts on “Moments of Vacation.”