On Friday morning of our two mom/five kid adventure, we sat out for our first true undertaking – to Dollywood, the theme park.

I am quite inexperienced at the whole theme park thing – remember Disney? Yeah – they didn’t even let me in the front gate. So I was beyond thankful to discover that Not-Crazy-Renee is actually fantastically adept in the art of theme park planning and navigation.

I mean, I knew she’d done Disney with a baby (something I would never dream of attempting), but she hadn’t told me how good she was. She just quietly researched the park, and when we arrived that morning, she confidently said, “Okay I’ve studied the map and we need to go down Showstreet and through Rivertown Junction to get to County Fair which is where all the rides will be for the kids.”

I hadn’t even thought far enough ahead to fully realize that oh yeah – the rides would be separated by age.

Tip #1: If you’re going to do a crazy adventure, make sure that one of the moms is a planner, and has actually successfully gotten her family into and through a theme park.

But her planning started before we even left the hotel, when she borrowed a sharpie from Ali (what nine year old travels without sharpies?) and wrote her phone number on her children’s arms in case of getting lost. 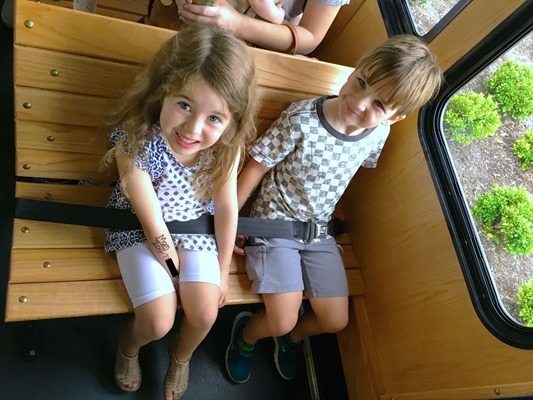 (I followed up with writing my phone number on my children…slightly smaller, on the inside of their arms, and without the giant “MOM”. But nobody ever accused Not-Crazy-Renee of not being bold. Remember the Neighborhood Package Thief?)

The phone number thing really was brilliant, and all the other moms at Dollywood kept commenting at our preparedness. However, it’s been five days and my number is still on Noah’s arm. So now it’s beginning to just look like he managed to snag some young lady’s number.

(And if someone saw the way he looks at Loulie, they’d have a pretty good guess of whose phone number he wanted to snag.) 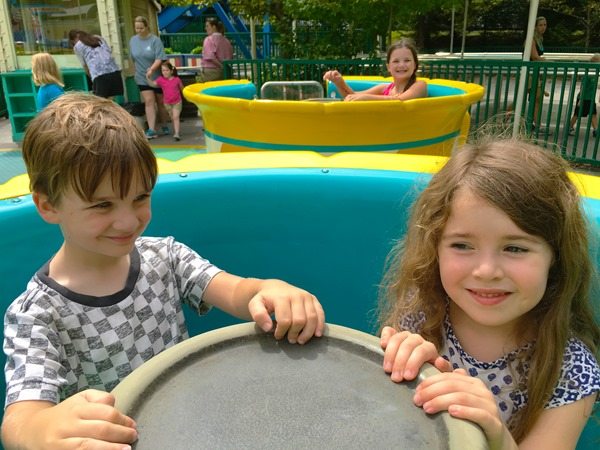 The rides were really fantastic. Teacups were a big hit, 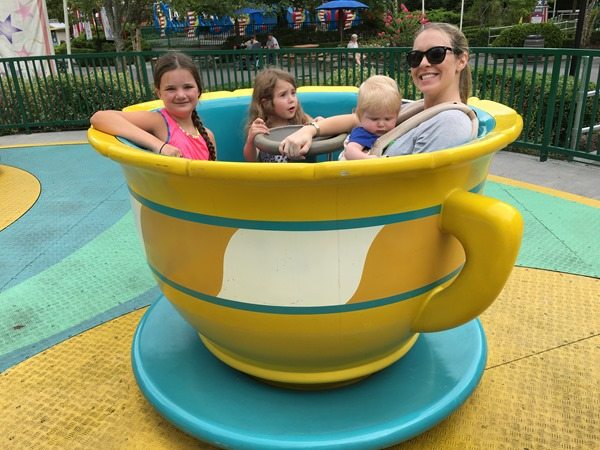 As were the bumper cars. 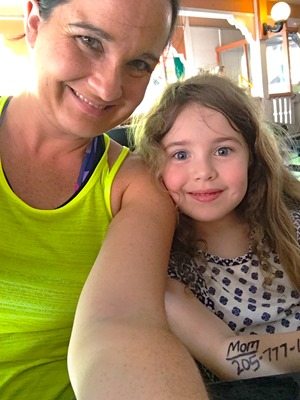 Some took it more seriously than others. 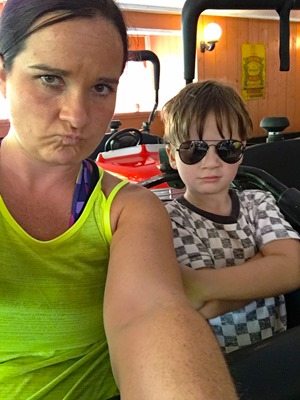 The favorite ride, but also the most complex for our outnumberedness, were the elephants. 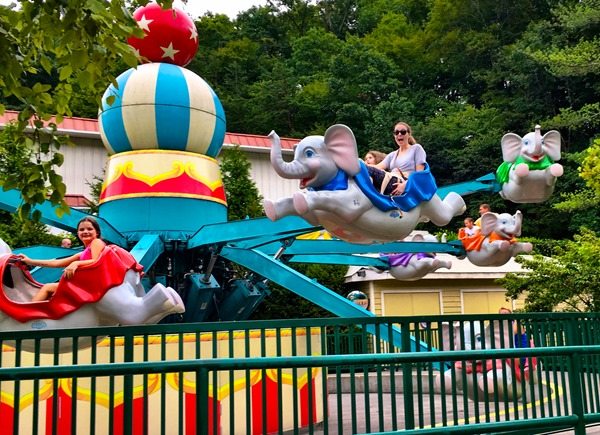 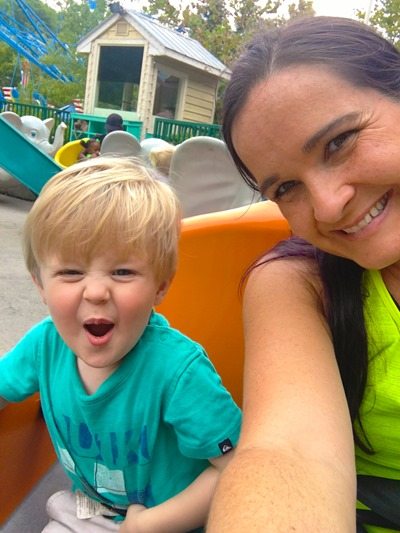 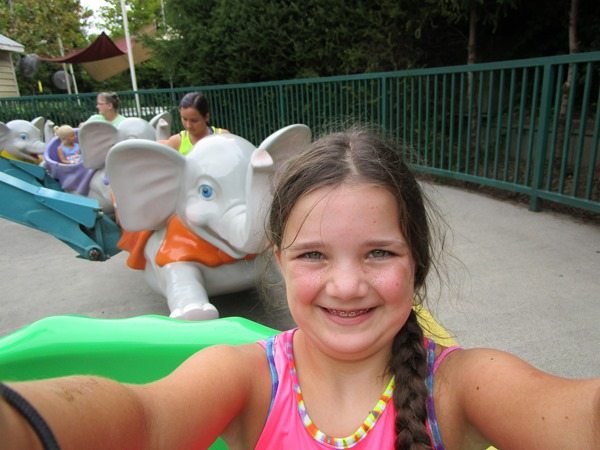 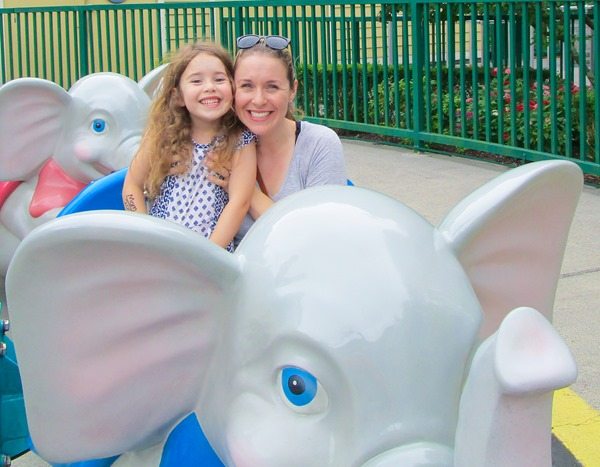 Here’s a Theme Park Math Problem For you:

Riders over 48” can ride alone. Riders under 48” must be with a rider that is over 16 years old. The baby in a carrier could not ride. There can only be two riders per elephant. Ali was over 48” and Noah, Jonas, and Loulie were under 48”. Plus, one adult had to stay off to hold Joshua, the baby. How many rounds had to be ridden to let everyone have a turn?

The answer is three, and the bonus answer is that Ali got three turns each time we rode the elephants (Perks for being the oldest.)

Thankfully, there were no lines that day, so this was relatively easy to accomplish. But since Elephants were the favorite, we ran this triple circuit multiple times. And sometimes, the kids waiting for their turn actually had a good attitude. 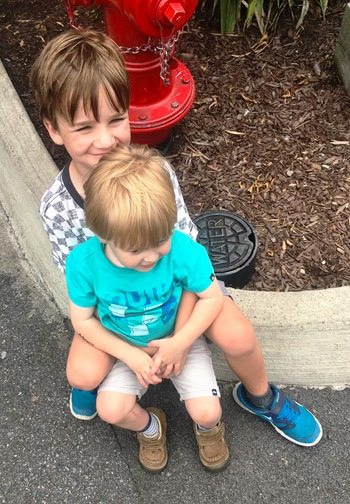 (By the way, Noah was BARELY under 48”. If he’d been over 48”, everything would’ve been easier. Tip #2 from Not-Crazy-Renee The Theme Park Expert: I should’ve glued a one-inch foam wedge to the bottom of his shoes. I want to go back to Dollywood this weekend just to try this BRILLIANT plan.)

At first, due to my Theme Park Status of ignoramus, I was completely confused by all the different height requirements, number-per-ride requirements, and height-measuring poles. But then I began to appreciate it, because there was a ride for every situation.

Jonas got to drive a car: 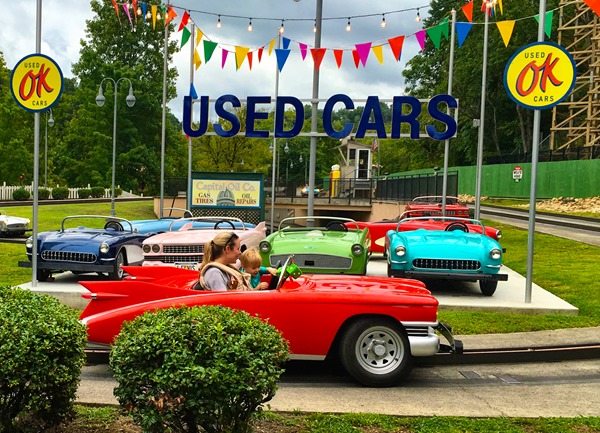 Loulie and Ali were able to ride a small roller coaster alone: 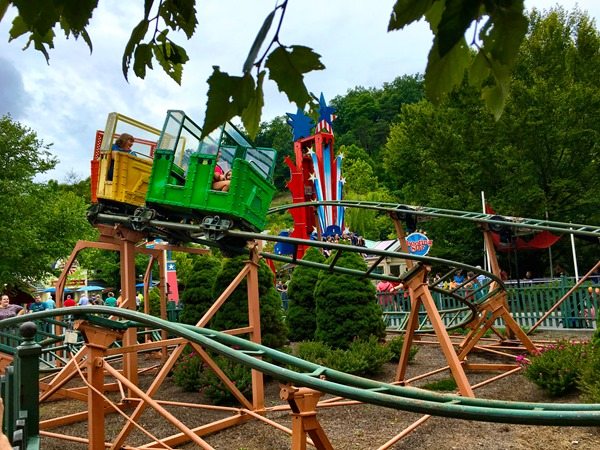 And everyone was allowed to ride in the Bumblebee and a couple other rides alone, even Jonas and a VERY proud Noah: 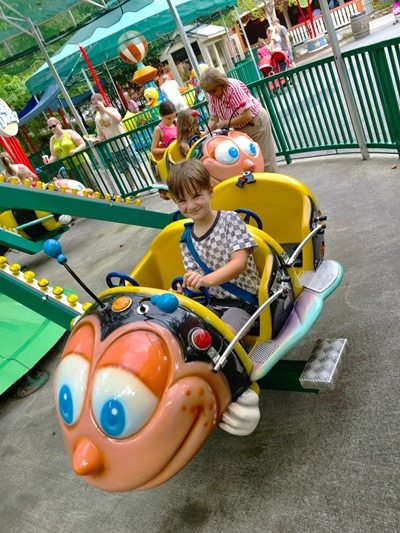 I’ve still got the Bumblebee song stuck in my head.

We spent the majority of Friday at Dollywood, until my stamina gave out first.

We’d been awarding everyone’s good attitudes on the trip with Lego Bucks, so we stopped at the gift shops on the way out of the park for an energy pick-me-up, distributing swords and candy to the children, and delicious truffle-things to the mothers (because I am telling you we EARNED ourselves some Lego Bucks.) 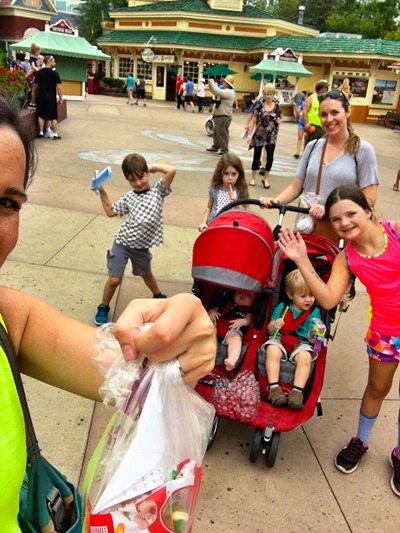 Why yes, Noah is auditioning for “So You Think You Can Dance.” Why do you ask?

As we left, I asked Renee how much of the park we’d accomplished in our many hours there. She said about one eighth of the park. One eighth! That made me want to go back without the kids to do the other seven eighths, mostly more intense rides. But it was pretty amazing that there was a whole day’s worth of rides they could ride – it made the concept of theme parking with kids so much more doable.

(I’ve always been a little scared of theme parks. But now I know. If I can do it with two adults and five kids, I can TOTALLY do it with Chris and just my kids.)

The next day, before heading back home, we went to the Waterpark. I was even more skeptical that this would work – The odds were ever NOT in our favor.

But they had three full kid areas, plus a lazy river and wave pool.

Kid area #1 (Little Creek Falls) had two mild slides that the three oldest kids could do alone (even my very risk averse Noah (who won’t even go down the slide at the YMCA pool) went right up and did it – no coaxing required!) 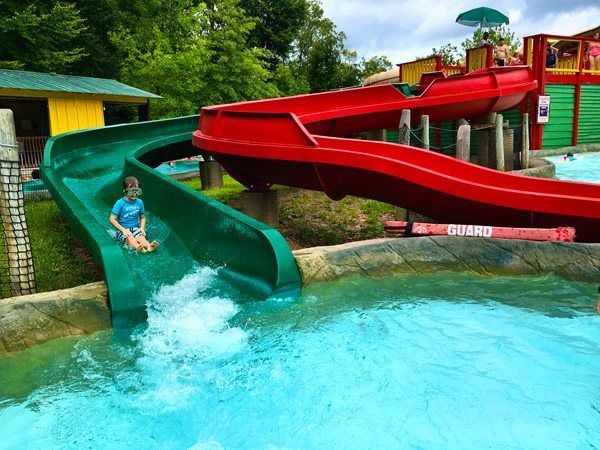 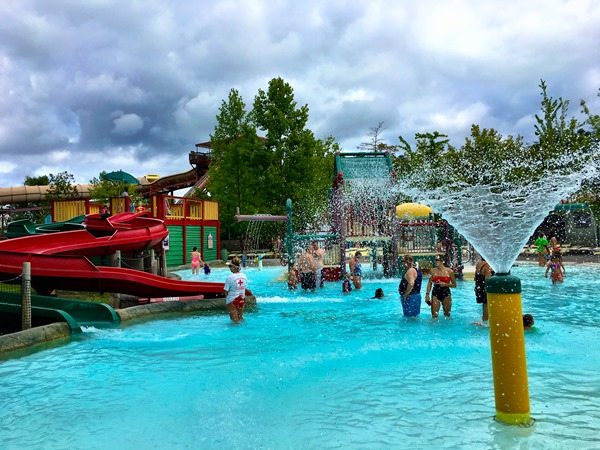 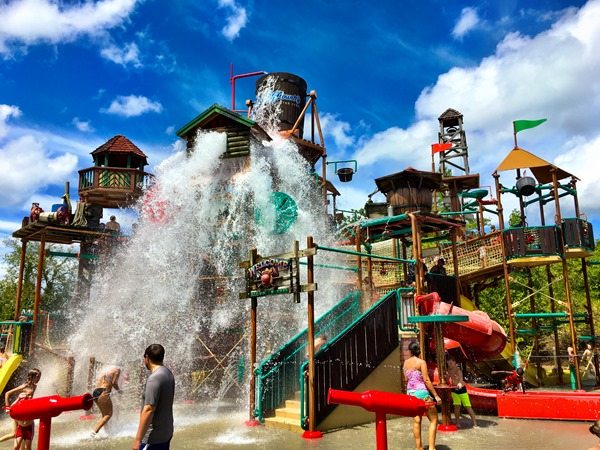 Kid Area #3, The Cascades, was the best kid area in my opinion – it was bigger, yet more laid back and quieter, but still had a couple great slides.

One of the slides was perfect for Ali to take Jonas on, a treat that they both loved. 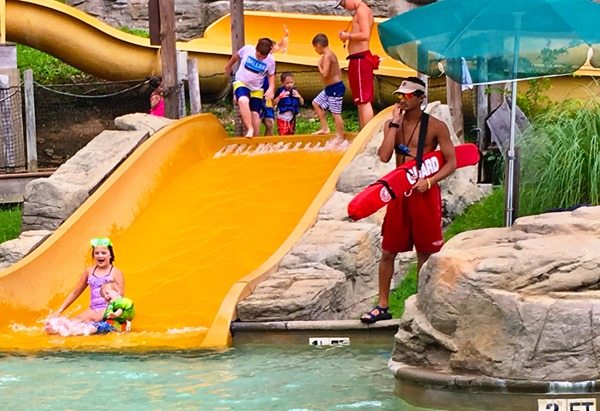 We chilled for a while at the wave pool, 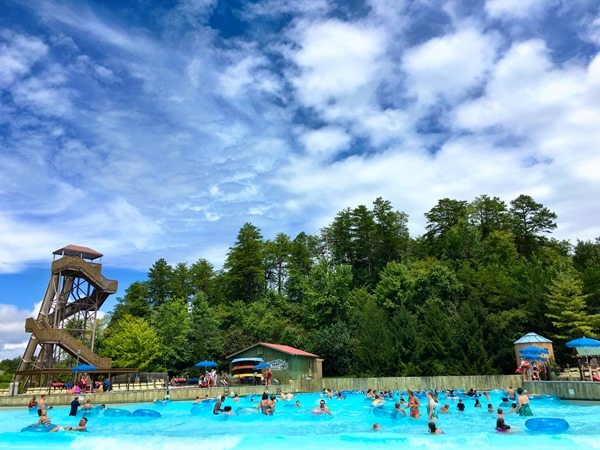 Which proved to be a perfect Dippin’ Dots / Cotton Candy break for everyone. 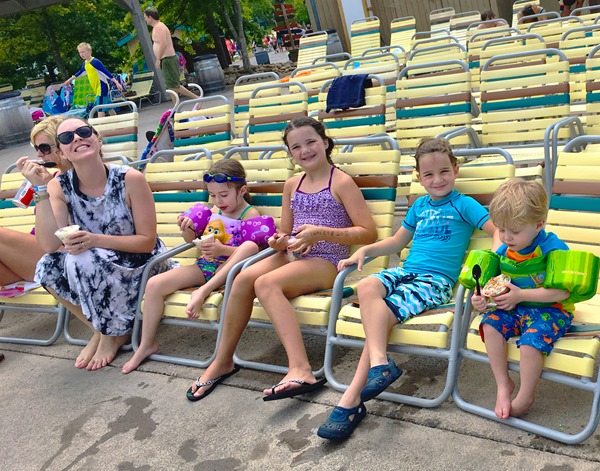 Renee and I also each took a turn taking Loulie and Ali on a big raft waterslide – a slide that had way too much adrenaline potential for Noah. 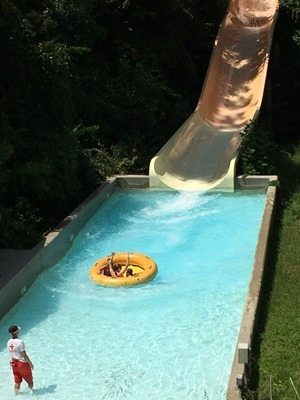 But the real adventure came, ironically, at The Lazy River.

Oh, I wish there were pictures.

We had decided we could do it – Renee could hold Joshua, I could hold Jonas, and the other three could be on their own floats. But the waterfall was loud and the river was somewhat crowded – and I couldn’t figure out how to sit on my float, be able to steer, and hold a two-year-old upright. I followed Expert Renee’s lead and hefted one leg up over the float, balanced Jonas on that leg, and left the other leg hanging down with which to steer, looking very much like Leg Lamp Boat Rudder. I wasn’t sure if my legs would ever go together again.

Meanwhile, Noah decided that a REALLY FUN GAME to play on the Lazy River would be (he didn’t name it this but he might as well have ) “The Drowning Game”, where he kept flipping over backwards in the middle of his float, flailing just below the water level (even though he could totally touch), allowing a couple of seconds to go by, then jumping out of the water laughing hysterically.

And no matter how hard I tried, I could NOT get him to quit playing this game.

We took two laps around because it had taken us the time of three laps to get into the river, so we couldn’t quit at one.

Tip #3: If you are grossly outnumbered by your children, leave the Lazy River to the happy romantic couples who are only dreaming of creating offspring. No need to show them what that dream actually looks like.

Aside from the Lazy River adventures, though, the waterpark was a smashing success. Everyone had a place they could play at a level they were comfortable, we stayed for six hours and the kids would’ve stayed longer, and we left with the same number of children we possessed upon arrival.

We threw everyone into dry clothes, doled out iPads and headphones, and started the journey back to Birmingham, enjoying the lovely view of worn-out, silent, double-screening children. 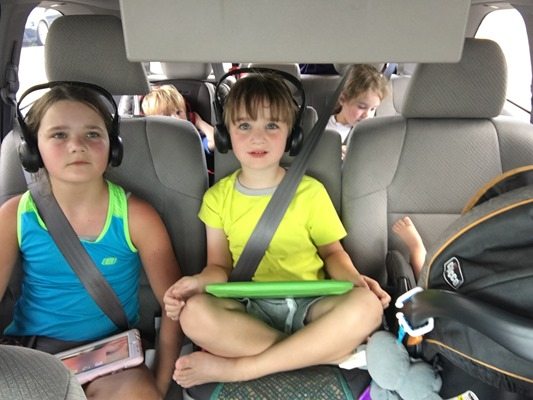 And we congratulated ourselves. Because we were CLEARLY rock stars.

(With an honorable mention to Ali, who was crazy helpful and much needed all weekend. Tip #4: Don’t travel without a kind and happy-to-help oldest child.) 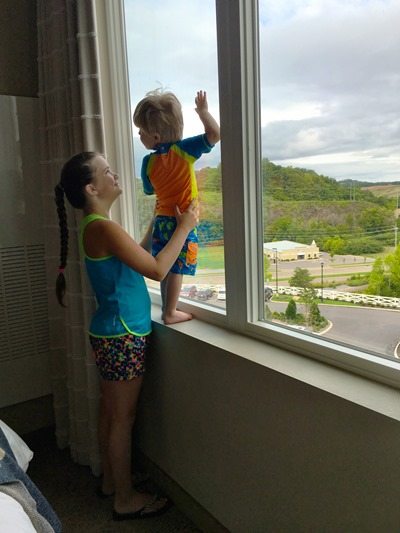 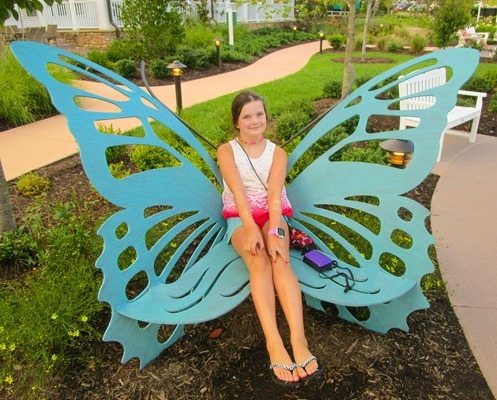 We were sure to give her many reading breaks and covertly sneaky treats that the other kids never saw. We made being the oldest totally worth her trouble. 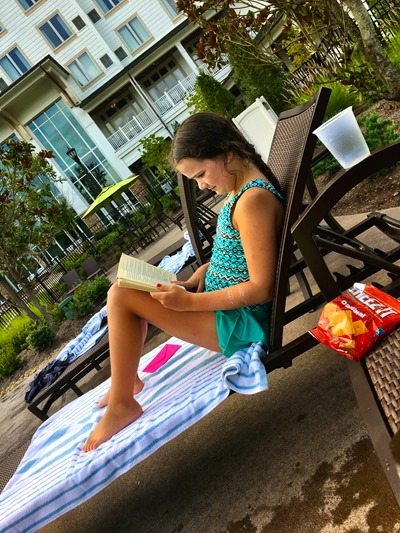 A couple days after returning home, Noah called me into his room to show me what he and his Daddy had built the night before at bedtime.

“Look Mom, it’s a time Machine. See? You turn this wheel and you can go back in time.” 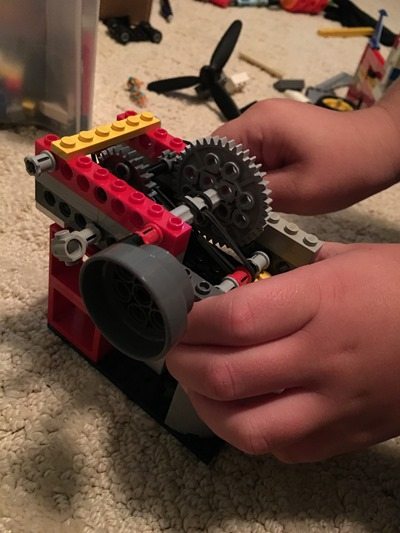 “Oh I am definitely going back to Dollywood!”

I’d call that a successful adventure.

7 thoughts on “On Learning the Art of Theme Parking.”