A couple of weeks ago when we were on our way home from our beach trip, during the window of “Last Hour of the Road Trip Home” which has a very strict rule of “No serious conversations because we WILL get snippy with each other”, I got a text from my dear friend and neighbor, Not-Crazy-Renee. 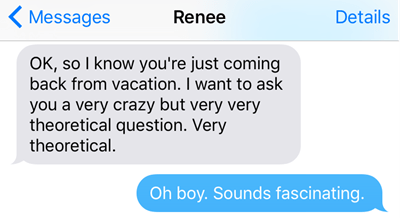 Just me and her. Oh – and our five kids.

Although her timing on asking me to go on an epic road trip was super poor, I was still intrigued. Because Maine. And scenery. And adventure.

So I inquired further.

Despite how well I know the little-bit-crazy parts of not-crazy Renee, the ludicrous INSANITY of “can you leave 16 hours from now and put in an entire workweek in the car with five children even though you’re not home yet from your last road trip?” just stunned me.

Yet I was STILL slightly interested. Because I’m a glutton for adventure. However, our family had already made plans for the upcoming weekend and there was just no possible way to make it work. But I had been promising Not-Crazy-Renee that I’d road trip with her all summer, so I re-upped that promise and determined in my heart to make it come true – sooner rather than later.

And so I began to look around and plan – where could we take five children and not hate ourselves for it? Where could children the ages of 9, 5, 5, 2, and 9 months all have fun and not make us lose our Mommy Poop? We discussed this at length. 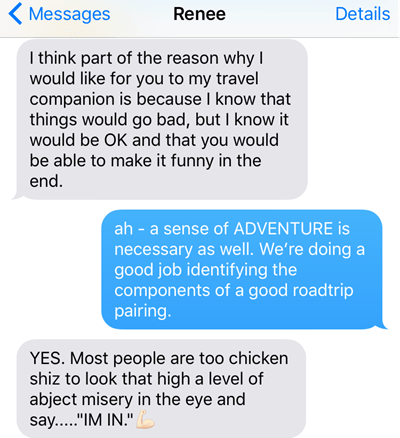 After considering many options and trying to optimize all the components to making our complex situation actually fun, we landed on Dollywood – the DreamMore Resort and the theme parks. And ironically, our plans didn’t fully come together until the day before we were supposed to leave. So at least I also provided that feeling of thrill and panic that she had attempted to give me with her Maine proposal. And on top of that, both our husbands were going out of town, so if nothing else, we were saving ourselves from Daddyless weekends at home.

We left Thursday morning, bracing ourselves for exhaustion, screaming children, and hating life. The odds were NOT ever in our favor. But we started out knowing we were rock stars, because we packed seven people for two nights this amazingly lightly: 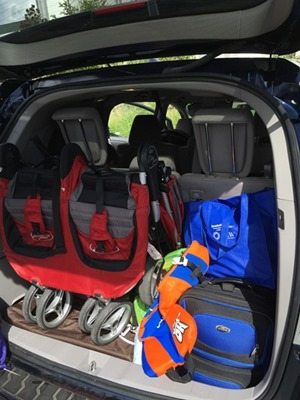 We were already winners.

The car trip went shockingly well, thanks to half a dozen screens. Twenty minutes before we arrived, reveling in the fact that no one had cried or even whined, we started to get hopeful. Maybe we could actually handle and maybe even enjoy this adventure we’d gotten ourselves into.

Ten minutes before we arrived, the screaming began. One kid started crying, one kid started screaming because the other kid was crying, two kids began whining and covering their ears, and we began our Lamaze breathing. Childbirth ain’t got nothing on a minivan full of screaming children.

But we arrived, and they were immediately distracted from their whining by the glory that lay before us. 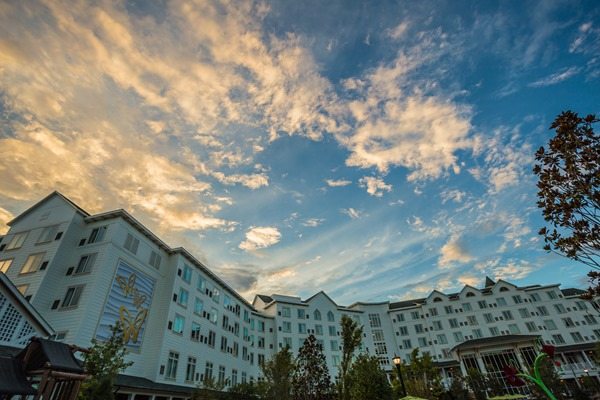 They squealed with delight and couldn’t wait to explore their new kingdom. 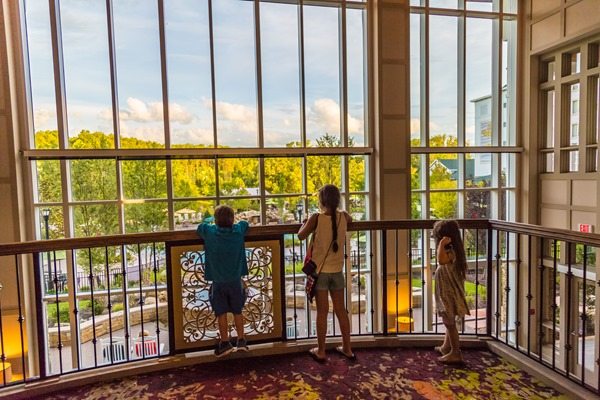 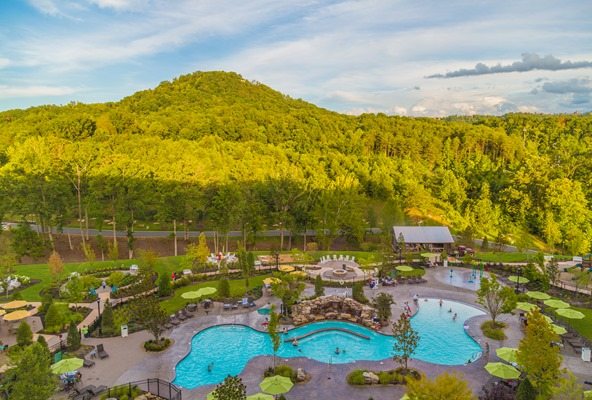 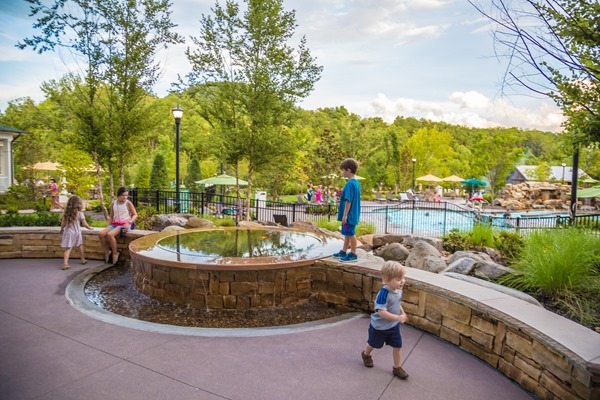 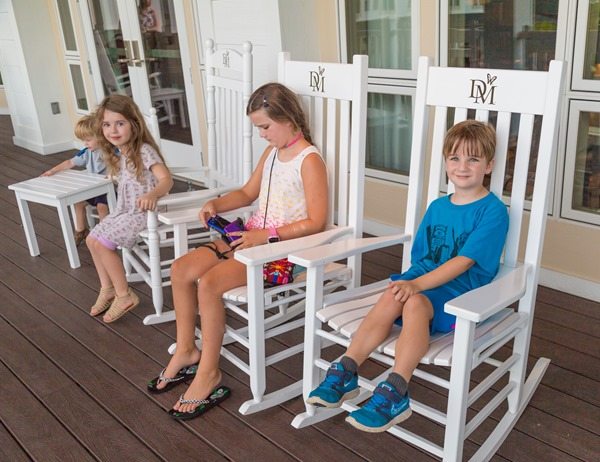 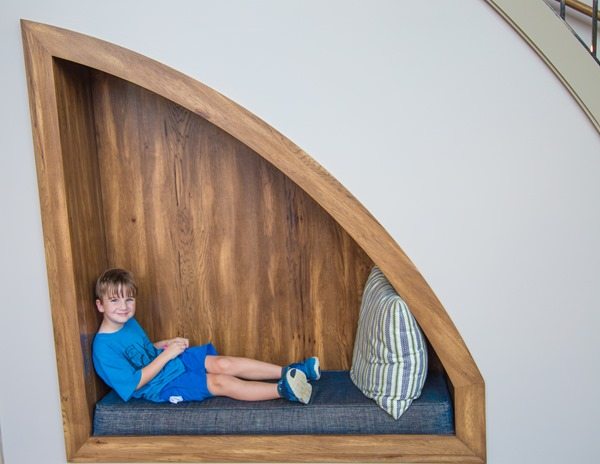 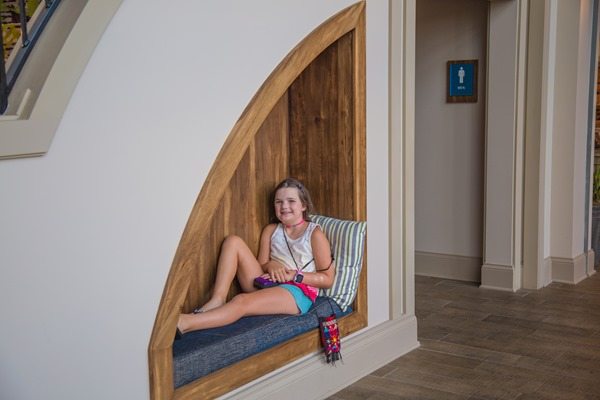 One of the first things they noticed was the recurring theme of butterflies. It became a game to count how many different places butterflies were featured in the hotel, all the way down to the toilet paper monogram.

Another feature helped the kids remember why the name Dolly Parton sounded familiar to them: the Imagination Library. Her book benches featured some of the best books she sends in that free program – including the first book, The Little Engine that Could. 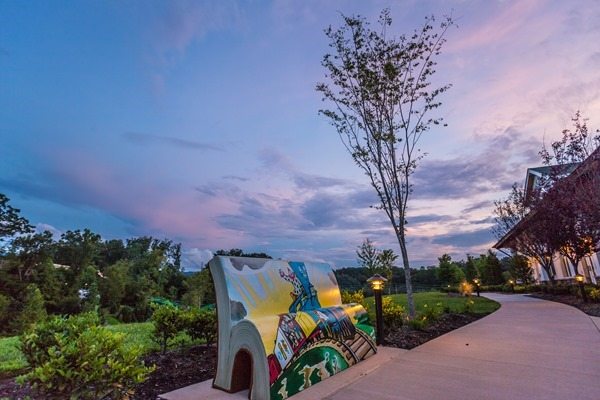 On that first night, they were fully entertained by just exploring. The hotel, the playground, the fire pits around the pool (we didn’t make s’mores but it was fun to see other people doing it), the barn, and this old truck, which made for some pretty epic photos for Noah and Loulie’s future wedding slideshow. 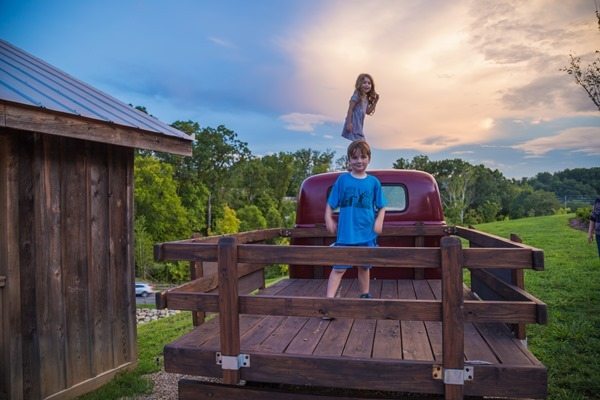 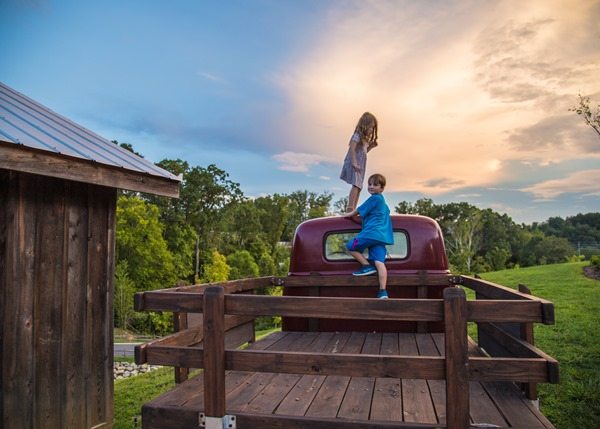 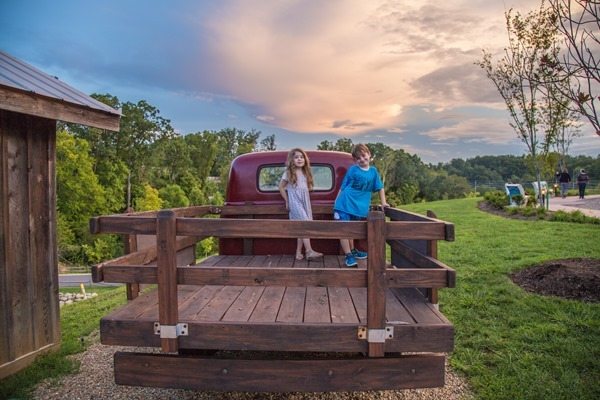 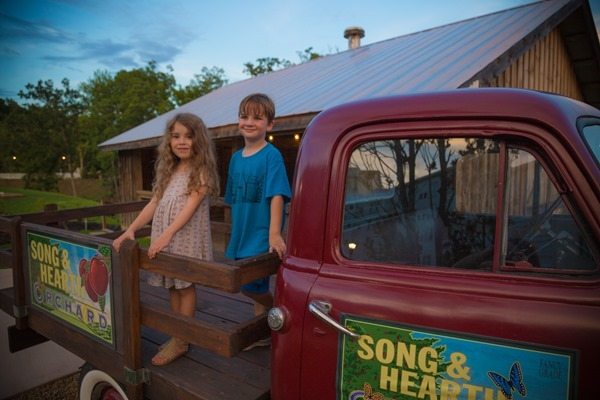 (Obviously, this part of the slideshow will need to be played to the tune of “I Will Always Love You” in deference to Dolly, who provided these magical moments.)

But magic or no, the injury list didn’t take long to start piling up. Within two hours of arriving, one kid had rolled off a bed, and another kid had stuck their fingers into the opening elevator crack and panicked as they watched their fingers being sucked in.

(If this ever happens to you, yank hard on said kid’s hand. It will rip free with all fingers in tact and a much higher respect for elevator safety.)

Our rooms were beyond ideal for our situation. We couldn’t have done what we did without the fantastic layout. We had two adjoining rooms, each with a bunk room and a separate king bedroom. 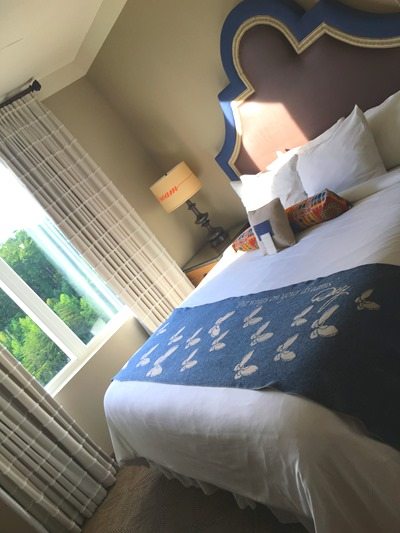 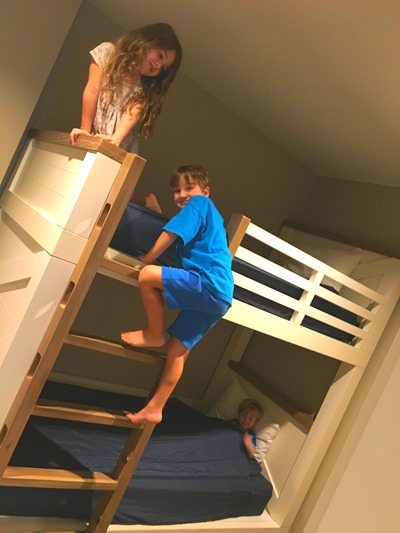 So at the end of each night, each family had their own kid room and their own Mommy Room. Granted, Renee had to share her room with the baby, but Joshua was by far the easiest guest of the weekend. How could you not want to share with this face?? 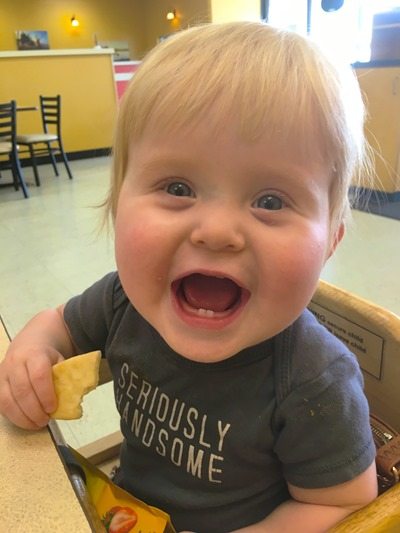 And if that weren’t enough, I had a sunset view from my bed. Clearly Dolly designed her hotel with me in mind. 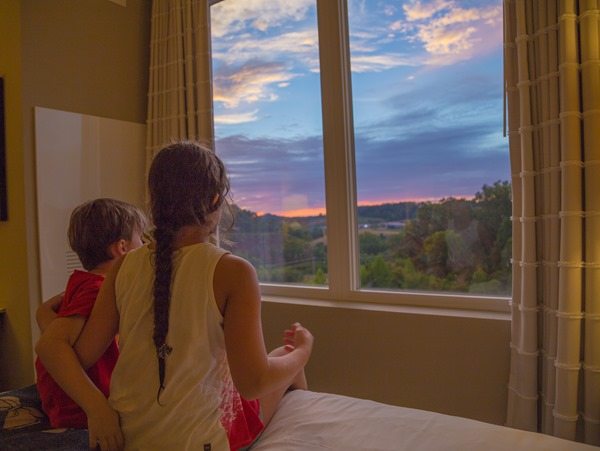 Yes of course I posed them for this picture. They were way too busy playing to care about sunsets.

I even took sunset pictures out the window – and Dolly cleaned her windows well enough that they came out like this. 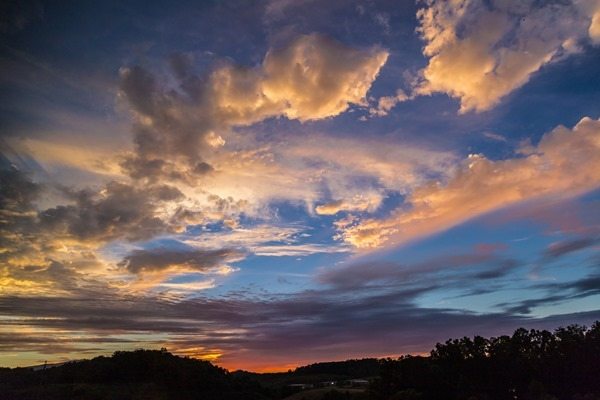 The resort had Dolly memorabilia in every part, which led to many interesting conversations about her. Such as this philosophical conversation I had with Ali:

“So is Wood not her last name?”

“She just owns the place so she named it Dollywood…kinda like Hollywood.”

Makes sense to me.

As for Renee and I, we were quickly realizing that outnumberedness, along the number of very small children, meant that every moment of our trip was going to require a quick “okay, what’s our strategy?” conversation.

(I know that there are many families with five or more kids that probably live their whole life in strategy-mode, and I appreciate those people all the more after this weekend.)

There was a lot of “okay you take those three, I’ll take these two” and “can you watch this one for a second?” and even more of, to the children, “Do NOT tell us what you want to do. We’re here to have fun. We’ll make sure you have fun. Don’t. Ask. For. Anything.”

But despite their constant requests to do ALL THE THINGS ALL AT ONCE, thanks to Dolly and the joy of being with each other, the kids had an incredible time.

Next time, we talk about our adventures at the Theme Parks. Yes, you heard me right. We took five kids to more than one theme park. So don’t call us wusses.

5 thoughts on “Not-Crazy-Renee And The Dollywood Adventure.”