There’s a universal set of lies that mothers of adult children tell mothers of small children.

1. Enjoy every second – I sure did!
2. You’ll blink and they’ll be graduating high school!
3. Oh honey, keep your chin up – because it only gets harder.

I’ve spent the last nine and a half years of my life attempting to ignore and not explode over these completely not encouraging statements, and also debunking them for other young mothers who have that horrified, exhausted, overspent look in their eyes. 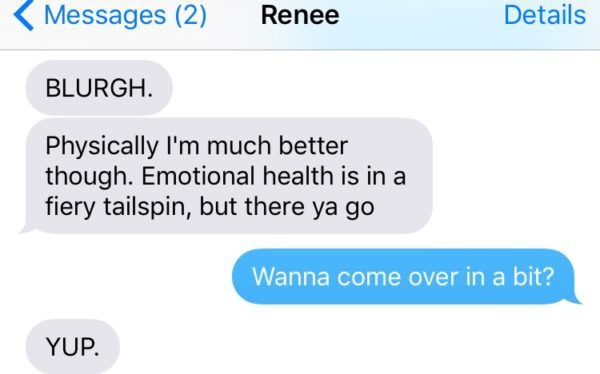 First of all, no one enjoys every second of motherhood. There’s a lot of crap we have to deal with – more literal crap than figurative, but plenty of both. We should enjoy the beautiful moments, for sure – but the concept of “enjoying every second” only breeds guilt and shame and a sense of being less-than in comparison to these mothers who have wet-wiped away the many crappy memories of their younger days.

Second. I don’t care what they say. When you’re in the midst of mothering young children, it is NOT a blink. Maybe it feels like it afterward, but it does not, in ANY WAY, feel like it in the middle – no matter how delightful your particular children are. Ali is a great example – she’s really been an unusually easy and great kid since about 9 months old. She didn’t even have terrible twos, y’all. But even still, when Chris sent me this Timehop the other day, it felt like at least a century ago – certainly not a blink. 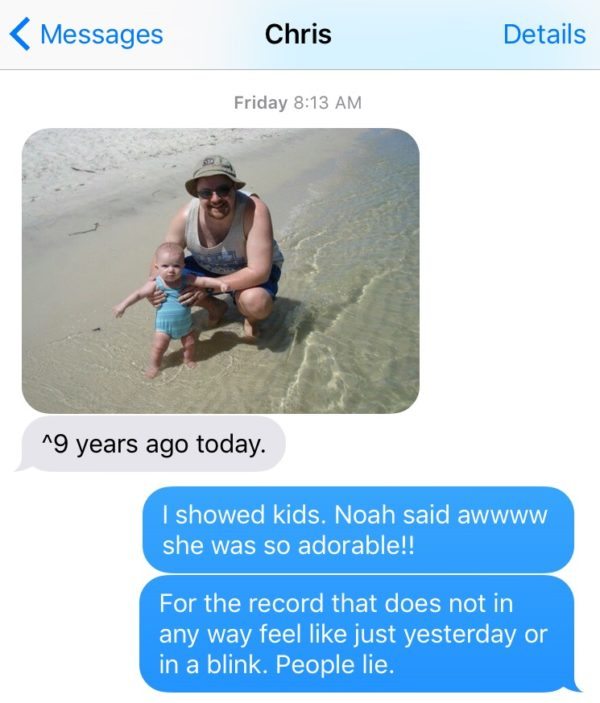 But those first two statements have been plainly not true to me for nearly my entire parenting career. (I even remember how NON-BLINK the first six weeks of Ali’s life felt. I kept blinking. The seconds of her constant screaming kept crawling along. BLINK BLINK BLINK.)

The third lie, however, has been my newest revelation of how lie-ey of a lie it actually is. And that’s what we’re here to discuss today.

“It only gets harder.”

I don’t know how many people I’ve had tell me this over the years – so many that I don’t remember any particular individuals – they all blur together into a continuous loop of it-only-gets-harder-honeys. And maybe teenagehood totally gets harder – it probably does. I’m not there yet. But I am here to attest – and to share the agreement of many of my friends who are in the same stage as myself – that it does NOT only get harder.

My kids are 9 1/2 and 5 1/2. And my life is infinitely easier and more delightful than when I had a newborn. In fact, I’m at a pretty dang easy stage of parenting. I don’t have to wipe any butts, carry any pumpkin seats, comfort any inconsolable babies, pack a diaper bag, wake up in the middle of the night to impart life-giving sustenance to anyone, or teach (over and over) the idea of what “no” means.

(Okay maybe the no thing is still being taught over and over. But the rest are solid.)

I remember when Ali was born. It was a horrifying shock to our systems – one of those OHMYGOSH I WILL NEVER HAVE MY LIFE BACK EVER AGAIN shocks. Newborns, especially first newborns, are all-encompassing. They take your sleep, your calories, your arms, your every waking moment, and your sanity. They cry inconsolably. They cannot tell you what’s wrong. And they give nothing in exchange – other than their tiny cuteness, which is NOT ENOUGH, I tell you.

(At least for the first one. It made up for a lot on the second one.)

I felt pretty panicky in those first few months, thinking I would never feel like “just me” again. But I quickly learned, and was able to remember and therefore make Noah’s infanthood easier, that you progressively get your freedoms and your sense of self back.

Renee did indeed come over Tuesday afternoon, and the chaos of her life reminded me how very much of my life I have back. I gave her a giant cup of iced coffee, sent my children to entertain two out of three of her children, and tried to encourage her that she is in Ground Zero of Parenthood – this is The Hardest It Gets (at least up to 9 1/2 years old, where my assumed expertise ends.) Those baby/toddler days are draining, and are definitely harder than the days I’m experiencing now. I even texted her (desperately attempting to be non-braggy) an example at 10am the next morning: 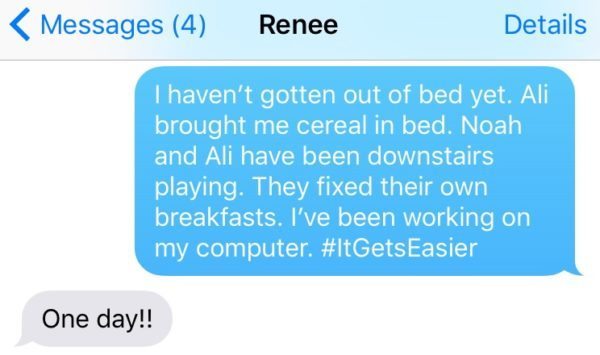 Here are a list of things that I can do now, that I would have never dreamed of doing when I had an infant, or a 1, 2, or 3 year old.

– I can take a nap – with my kids at home – and they are perfectly able to entertain themselves.
– I can sleep in – because they can read clocks and know they’re not allowed to come into my room until 8 (and 8:30 on Saturdays.)
– Ali really likes making a little money on the side, she she voluntarily brings me breakfast in bed about once a week (an entrepreneurial delight that I reward with 50 cents.)
– I can say “I’m going out on the porch to read a book”, and they say “Okay!” – and I – get this – GO OUT ON THE PORCH AND READ A BOOK.
– My kids and I can go on adventures – hiking, exploring, having fun – without having to worry about naptimes or diapers or feedings or even constant whininess (sometimes.)

Here are a list of things that my kids do for themselves that seemed like a foreign and exotic fantasy when I had a newborn or a toddler:

…………..and that’s as far as I got writing this post before I put it down for the day and got back to life.

…..Later that night, I discovered that in an effort to make money that morning, my daughter, while I was still in bed basking in my #ItGetsEasier lifestyle, had unloaded a dirty dishwasher. And I discovered it at 10:30pm that night. Which also meant that the bowl of #ItGetsEasier cereal she’d brought me that morning….yeah I don’t want to think about it.

…..And on that same night, my son, of whom I do not have to wipe his butt anymore because #ItGetsEasier, solidly clogged up the kid’s toilet with a massive dump – so much so that neither that night nor the next morning could my husband unclog said toilet.

It does get easier.

You do get your self back.

But parenthood is a lifetime purchase.

And they’ll find a way to make you pay interest.

Disclaimer: Before you hate, I love my children. I love to spend time with them. I love being a Mommy. This post is only meant to encourage the fellow mothers in the trenches of what is a quadruple-overtime-required job – is it worth it? Yes. Is it seriously mind-blowingly hard sometimes? Yes. That is all.