After having loved and lost my perfect running shoe when it was discontinued, the experimental replacements I have attempted have slowly damaged me in different ways, much like that new friend that you thought was normal but then turned out to be just a tiny bit psycho.

One gave me blood blisters on the bottom of my feet. Another made my pinky toes swell up with water blisters. The other added a nice donut of water blister around the blood blister from shoe number one. And, if I ran long distances in any of them, they hurt me. Badly.

For the record, this is from the girl who didn’t realize she broke her finger – and walked around with a broken elbow for three weeks before discovering it. So I take my feet complaints somewhat seriously, not giving myself the “Oh, running hurts! Get used to it, noob” treatment.

Finally, all three pairs got so bad that it felt very much like what it would feel like if you took all of my Facebook Friend’s opinions about the 2016 Election Season, threw ’em in a bag, and shook it real hard: there is no choice that won’t end in tyranny, a torturous death, and the end of the world as we know it.

I had Pair Trump, 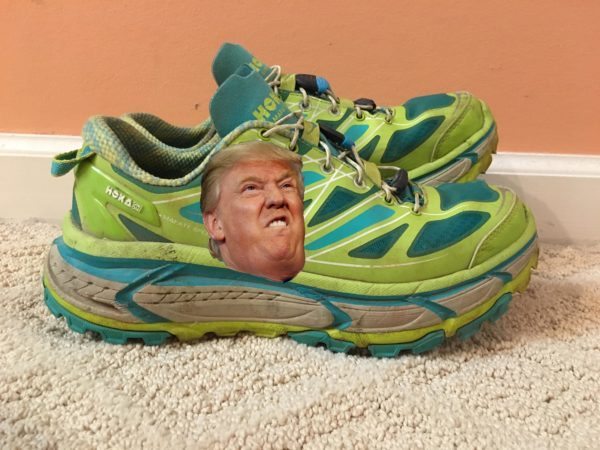 My Hoka Mafate Speeds were gigantic and brash. They came with many promises to make running great again. And at first, they were cozy and bouncy and felt like running on springs. But ultimately they were too handsy and cut into the sides of my toe like a narcissist with executive power.

If only my feet had been a little narrower…these would have been the perfect shoe. 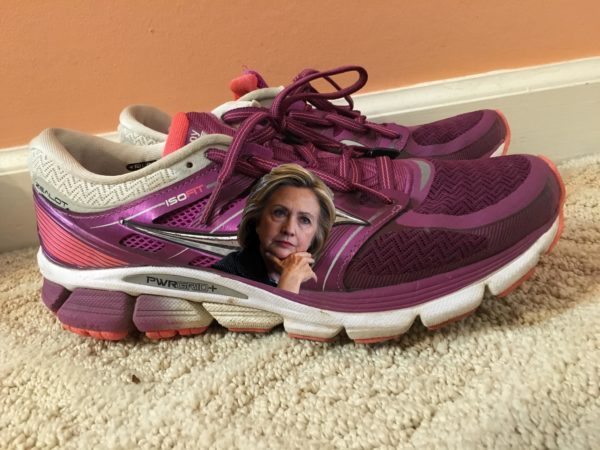 My Saucony Zealots, seemed like a safe choice. After all, I’ve been running in Sauconys for years. And they’ve been around for decades – they should be qualified for the job, right? The Saucony rep himself lobbied for me to buy this pair to replace my sadly discontinued Sauconys. And for a while, they acted like they were for my best interest and cared about Feet’s Rights, but eventually attacked them anytime I ran over 3 miles, numbing my feet and providing them with water blisters – the gift that keeps on giving.

If only my feet had been a little stronger…these would have been the perfect shoe. 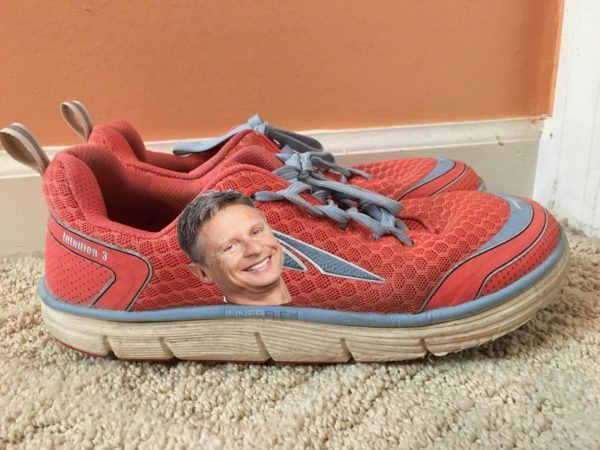 My Altra Intuition 3s, the least well-known of all the shoes, seemed like the best solution. Altras believe in trimming down the shoe experience to just the minimal government of the foot, giving wide berths for forefeet to make their own decisions for their life, and basically staying out of your business. I liked the sound of that.  And for the first couple hundred miles, I thought I’d found the shoe for me. But they slowly ripped off the ball of my foot when I wasn’t looking.

If only my feet had provided their own cushioning…these would have been the perfect shoe.

For a long while, I would just rotate the three candidates so that I didn’t re-injure my last injury before it healed. But this became quite wearisome to my poor feet.

So it was time to find a new solution.

I went to a local shoe store that was known for their expertise in matchmaking runners with shoes that don’t hate them. I explained my feet’s specific needs (as in they would really like some shoes that don’t feel like razorblades – oh, and also, one of them has had two surgeries which creates all sorts of scar tissue issues), and the salesperson looked at me blankly and was like “Uh…well I could grab some shoes out of the back for you to try on…”

This was not what I had in mind.

I went back another day, after doing some research and having a particular shoe in mind. I thought maybe if I walked in with a mission, I could walk out with a shoe. “Do y’all have this shoe?”

“No…we don’t carry it. But why don’t you try lacing your shoes differently? Like this?”

I relaced Pair Hillary and Pair Johnson according to her suggestions (Pair Trump has eternity laces that don’t allow relacing because obviously they know how to make my feet great again without me second guessing their methods), and I felt optimistic, thinking that perhaps she’d just saved me $100 with great advice.

Nope, it was about as helpful as swapping the candidates first and last names: now it was Pair Clinton Hillary and Pair Johnson Gary.

I had another shoe that I’d found on the internet – perhaps it would be The One. I went back, a third time, to the same shoe store. “Do y’all have this shoe?”

“No…not anywhere near your size. We might get them in a couple months from now, though.”

I took this third visit as a clear sign from God – a moist sheepskin, if you will – that perhaps I needed to try another shoe store. So I marched myself right over to the other expert running store in town.

“Do y’all carry either this or this shoe?”

Looking at me as if the shoes I’d suggested were the worst two shoe choices in the entire world, she said “Nope.”, while clearly implying “(Why WOULD we?!)”

She brought me four shoes to try on. All hurt. I had just run 10 miles in Pair Trump, though, so my toes were screaming “Get away from me you immigrant shoe or I’m going to build a wall!!” to every pair that got within six feet of them.

I came home, panicked and empty handed. I laid on the couch in a stupor, partly from dehydration and partly from my existential shoe crisis.

What was I to do?

Were my feet this messed up that no normal shoe would work?

I must find a solution before my next run! I cannot go on like this!

And so I did what everyone says to never do: I hopped online and ordered both pairs of shoes that I had internet researched: The Hoka Constant, hoping that it would be the dreamy springiness of my other pair of Hokas but with a wider toe box, and the Saucony Echelon 5, hoping (even though one store clerk sneered at it) that it would be the triumphal return to the perfect Saucony.

The Hokas delivered first, and I opened the box, felt the shoe, and never even put it on my foot – the soles felt to be made of cement and would not, did not, refused to have a single smidge of movement. It was Pair Trump plus his wall as the sole.

Then the Sauconys came. And they were everything I could have wanted. Cushioned, miles of toebox room without causing any too-loose problems, and as if they’d been built for my complicated feet. I was hesitant to believe in them at first, seeing as how all my other shoes acted nice but then betrayed me, but a couple hundred miles in, and we’re still happily in love. 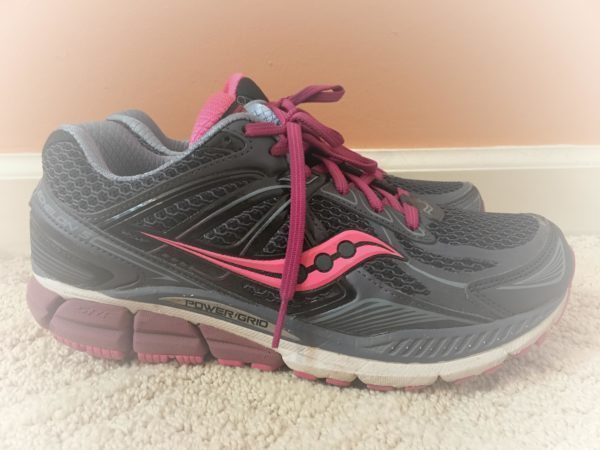 So the moral of this story is, your perfect shoe is out there, but I don’t know if the same is true about a presidential candidate. (Maybe try ordering one off the internet.)