I really had no idea. I was in denial. It’s so beautiful…It has to be perfect! All places have these things…right??

The first time it was pointed out, it was by a brand new Alabama resident who grabbed my arm and said with a horrified voice, “Someone told me there were VENOMOUS SNAKES here. That’s not true, is it??”

“Well yeah, sure. We mostly have Copperheads and Rattlesnakes and Cottonmouths, all of which I’ve seen in the last year. There are some others too, I think. But it’s not a big deal.”

She gasped in horror and said, “THEN DOES THAT MEAN THAT THE SCORPIONS ARE TRUE, TOO??”

I was confused. Didn’t all of America have the same basic set of “Nature to Avoid”?

I moved on. Until I wrote my boob/Cottonmouth post a couple of weeks ago and one of my blog readers came ALL UNDONE.

(Bethany. You know you did.)

She went on and on about how in her state, they don’t deal with wildlife, and this is just BIZARRE, and how is it that everyone in the Horror-Filled State of Alabama doesn’t band together to fight against the treachery of our nature??

Again. I was stumped. I don’t find my state treacherous. I’ve lived here all my life and have never thought any of it was unusual.

We have venomous snakes and spiders (some even like to bite the nether regions of toddlers.) Mosquitoes. Horse flies and the angry Yellow Fly down south. Chiggers (okay they’re the worst.) Poison Ivy, Oak, and Sumac, plants that regularly tried to ruin my summers as an awkward middle schooler. Lots of fire ants. The dreaded Cow Ant. Bees. Wasps. Hornets. Yellowjackets. Dirt Daubers. Ticks. Snapping Turtles. Flying cockroaches. Stinging Ladybugs. Poisonous Caterpillars that send the strongest of grandmothers to the ER. Bats that cause confusion and delay. Tornadoes. Hurricanes down south. Triple digit heat. Alligators down south but slowly encroaching north. Coyotes. Armadillos that can do a NUMBER to a car tire if you hit one.

(I actually have no factual evidence regarding that last statement but their armor does seem intense.)

Alabama even had a bear run out in front of a car recently, totaling the car and killing the bear.

(My kids were fascinated by this story and said “ARE THERE PICTURES??” I responded with “Y’all don’t need to see a picture of a dead bear.” Ali’s face clouded over with disappointment and said, “Oh. So there’s not a picture of the bear actually getting whacked by the car?”)

(Clearly they’re as deranged as their mother.)

Maybe Alabama was The Hunger Games.

And maybe, just maybe, I was Katniss. I mean I do hike around with a giant (camera) backpack and a side braid, all the while with sweat dripping off of me from the inhumane heat. 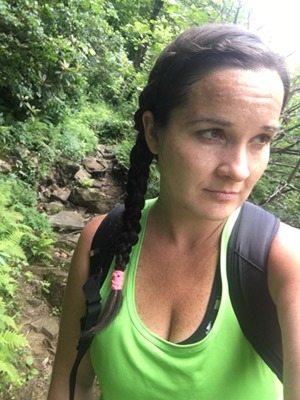 And aside from the occasional tick and regular mosquito bite, I do a good job of winding my way through the perils of my surroundings, despite my constant outdoorsiness.

(Okay but I did suffer an impressive allergic reaction while I was in Mexico – to a wasp sting that I had received the week before near home. I thought surely I had contracted the Zika Virus. But nope. Just the results of Alabama Wildlife following me out of the country.)

But overall, I am a pretty DANG GOOD Tribute.

However. As soon as I began making this list of vile dangers that I so expertly avoid, The Gamemakers at the Capitol felt it best to throw me a few unexpected challenges.

First there was runch on Thursday with my friend Tanya. We run, then we get a smoothie. It’s what we do. 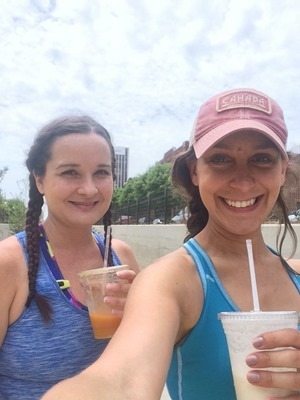 (I promise I eat way more lunch later. And so does Tanya.)

On last week’s particular run, we each ordered the Strawberry-Peach Smoothie from our favorite local smoothie maker. And then, two hours later, were both simultaneously and violently overcome with food poisoning.

Clearly we must have been slipped Nightlock in our smoothies. It’s the only explanation.

But I am an AMAZING Tribute. And I recovered. Just in time to go away, out into nature, for my annual small group girl’s retreat. 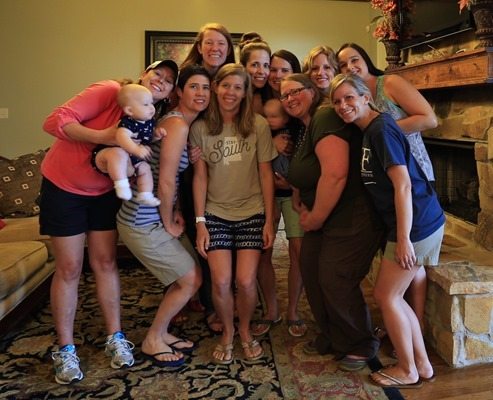 We left 30 out of 32 of our children at home with the daddies. So of course, it seemed only right that on Saturday, I should lead a hike on a trail I had never taken. There would be no whining! No “I need to potty”s! No “I’m tooo hooooooot”s!! 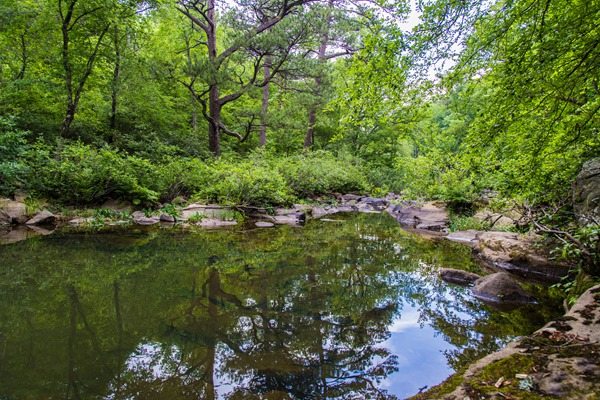 The State Park office warned us that it would be treacherous, but we knew we could handle it. And handle it we did. 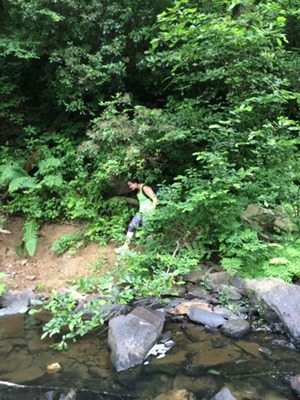 We climbed that boulderous trail with grace and Woman Power, all while having deep and completely unladylike conversations. 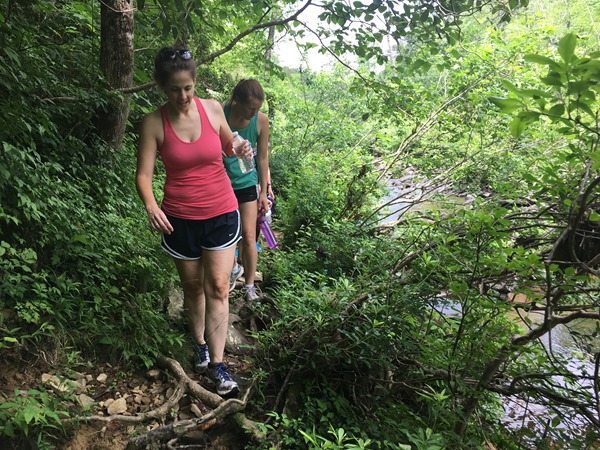 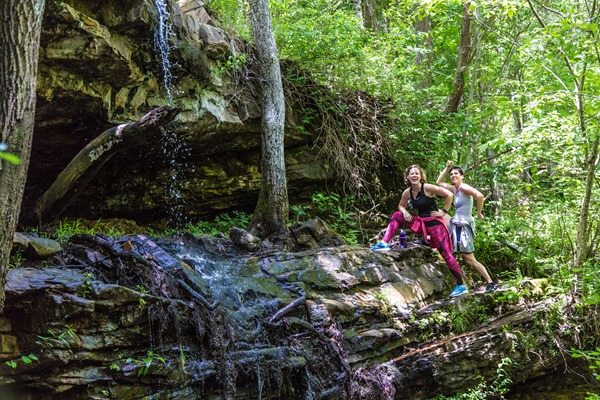 After our hike, three of us wanted to go on a trail run. We took the trail that the State Park rep had suggested as the “better choice” for running. 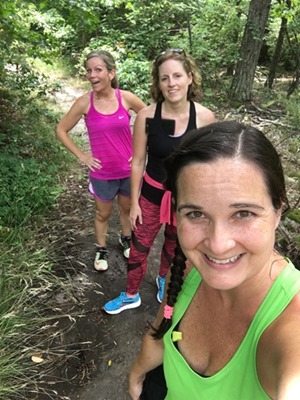 It was lovely, but not easy. The trail was not smooth, and had generous amounts of curves and hills and roots and branches and boulders and low trees.

A mile into our run and just a few minutes after telling my friends about Tanya’s very true blog post that runners can’t just become trail runners because trail running is freaking hard, an angry root caught my shoe, tore a hole through it, curled its tentacles around the inside of my shoe, and turned me into an involuntary missile.

I propelled forward, nearly caught myself, but then a boulder said nope.

I flailed forward again, this time headed straight for a broken face against three more boulders who were itching for a human sacrifice, but I threw out my left hand just in time.

I saved face, but not elbow.

I landed, in a wash of pain, knowing I had just ended our delightful trail run with some sort of wretched injury.

And then I began to pass out.

Nurse friend Lydia took my dropping pulse and made me sit, then tried to lift my feet up over my head as I screamed at her as to why she thought this was a good idea.

She’s a pretty DANG GOOD Tribute as well, because she crafted me a sling out of the long-sleeved(?!?!) shirt she had been wearing around her waist to cover the backside of her leggings-as-pants. I might’ve thought her modesty was silly, but I did appreciate the sling. So tip: always have a modest friend in the Arena with you.

I stood up again, then went right back to passing out.

After a minute of sitting, I decided. it was only a mile back. I could power through this.

I stood up again, began to walk, and Lydia decided from my paling face that she’d leave me with Ashley to go “get help.” I wasn’t sure what that meant but didn’t care because I was passing out again. I reasoned that the only way through this was through it and kept walking, and I am here to testify – that is sound medical decision making. The passing out faded, and I slowly made the mile trek back, trying desperately to ignore the pain of every wiggle in my arm.

The hurt began fading as we marched on, taking orange then red then blue then boardwalk trails, carefully retracing our steps. 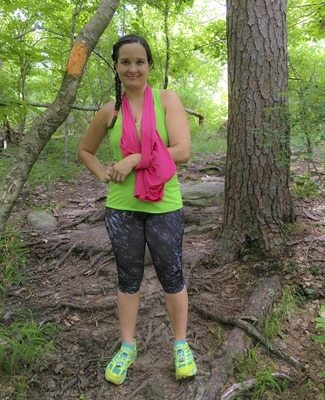 As we approached the last trail, Lydia met us with water, an apple, a blood pressure cuff, more of our friends, and a state park official, who was pleasantly surprised that I’d done the hard work of removing myself from a mile of woods without his help.

He filed an “incident report”, taking my name and address and driver’s license number, while I nervously asked if I was getting banned from state parks and begged him not to prohibit trail running because half my friends would hate me. He told me to go to the ER and I nodded promisingly.

He left, and Lydia asked, “What’s the plan?”

I said, “Let’s go back to the house and chill.”

After all, it’s just an arm. There are way worse things to be without. It is my left arm and I’m left-handed, but still. Just an arm.

(I did get a phone consult from my Miracle Max Physical Therapist and a text consult from our shared Pediatrician, and they agreed that I’d probably live without an ER visit.)

(I did indeed live but also totally got stuck in my sports bra for about 20 minutes, but because I’m a DANG GOOD TRIBUTE, I fought that sports bra and I WON.)

We came home on Sunday, so I made a stop by Urgent Care. Turns out, my elbow, although swollen and oddly shaped, was not broken. But my index finger, which I didn’t even realize was hurt until hours after the fall, was indeed broken. 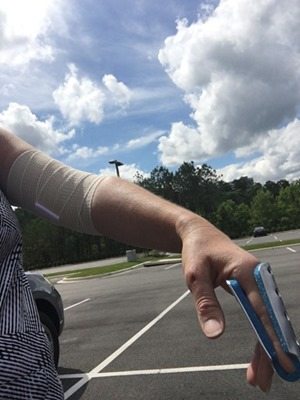 (Luckily I typed most of this post the night before. Broken fingers are WAY easier to type with than metal splints.)

(Apparently my high threshold for pain is detrimental to my health.)

But I can now add two new treacheries to the long list of Alabama Hunger Games Hazards.

How many of these things do you have in your area? Surely we all equally live in The Hunger Games. Right?