I have a stubborn, finicky five-year-old. Who tries to convince me and everyone else otherwise with his charming blue eyes. 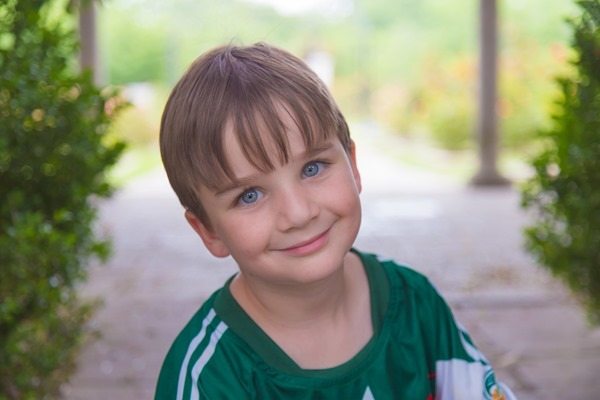 No really. He’s stubborn and finicky.

It is for this reason that, when he began swimming on his own two weeks before his first round of swimming lessons, I texted his father and said “Swim lessons should be a breeze. Unless of course he decides to make me go insane.”

I am fully aware of his abilities to make up his mind not to do wonderful, delightful things and nothing will change his mind.

But. I blame the failure of his swim lessons completely elsewhere.

You may remember, three years ago, that his older sister got fired from swim lessons halfway through her first week for refusing to put her face in the water. But, despite being totally cool with his face submerged, Noah didn’t make it nearly that far.

The wonderful teacher that we used with Ali hasn’t taught the last couple years, so we decided to try a different method of lessons for Noah – lessons provided through the pool of which we are members.

It was inexpensive, close by, and seemed like a great solution. Ali could swim while he lessoned, and we could even use our enrollment fee to pay all but $10 of the lesson fees!

WHAT could go wrong?

I wasn’t super thrilled that it was four days a week for two weeks – I prefer more of a spontaneous lifestyle, and eight appointments in ten days was definitely a cramp to my style. But kids need swimming lessons. Parents must make sacrifices.

We showed up on the first day and swam for a bit, then headed to the indoor pool for lesson time. The teacher was finishing up with the class before.

We sat for a bit and watched – surely this would be good for the kid to get to see the easy easy things he would have to do – all of which were way below his self-taught abilities.

Then it was his turn. He was in a class with five other kids, all of whom looked younger than him. Six 3-5 year olds sat on the side of the pool, squished together as only 3-5 year olds will do. I sat off to the side, watching. Another mother came and sat next to me, waving her hand in front of her face as if she had the vapors* and and saying “I am SO nervous!”

WHAT could there possibly be to create nervousness??

* I know “the vapors” is a thing of the past, since now vapers are people who smoke fake cigarettes. But hopefully we’re all old enough to remember what the vapors meant five years ago. However, this post will be a fascinating relic in five more years.

The teacher stood in front of the gaggle of tiny humans, saying something quietly to each one of them. They silently sat, staring at her.

After going down the whole row, she looked incredulously at me and Nervous-Mom. She threw her hands up and with wide, shocked eyes, yelled across the pool, “They won’t even tell me their names!!”

Um. Yeah. They’re 3-5 year olds. They don’t talk to strangers until they warm up to them.

I started to join Nervous-Mom in her nervousness, but for different reasons.

An assistant teacher walked up and hopped in the pool next to shocked and dismayed teacher-who-has-never-met-a-small-child.

She looked at the new arrival and threw her hands up again. “They won’t even TELL ME THEIR NAMES!! WHAT am I supposed to even DO?!”

Assistant teacher said quiet and calming words. They seemed to work, because Teacher-From-Mars took a breath, got her paddle board and convinced Nervous-Mom’s daughter to grab ahold of it and kick her feet. Then the second kid. And then it was Noah’s turn. She motioned to him and pointed to the board. Then motioned again, impatience pouring out of her eyeballs.

I saw Noah begin to get up from his middle position in the squished gaggle of kids. This couldn’t be good. I figured I’d walk over and try to help.

I got within talking distance and told Noah calmly that he needed to obey his teacher, all while she nodded vehemently and looked at me with an incredulous and hateful gaze for creating such a disobedient human.

Noah ran over to me, threw his arms around me, and started crying.

They weren’t shy tears or belligerent tears this time.

These were real tears of “someone is not being nice to me and I can sense it.”

I removed him from the swim lesson area and found a quiet corner.

We tried FaceTiming his father and letting him reason and bargain and bribe.

Noah couldn’t quit crying and made it clear that he could not participate in swim lessons.

Every now and then I glanced behind me to keep an eye on Ali, who was swimming laps, and also caught glimpses of Teacher-The-Child-Hater.

One time there was exaggerated eye rolling.

Another, arms thrown up.

Incredulous eyes and looking at a tiny humans like they were the stupidest.

Looks of shock and mistreatment like these little beings came just to torment her otherwise perfect existence.

Looking around at all the parents, trying to find sympathy for her martydom.

I’m one of those moms that think their kid needs to do what they are told to do, but there was NO WAY that I wanted to put up with this teacher for eight days, let alone subject my tiny progeny to her.

I went and found the paperwork girl that had come around to get our information earlier. I informed her nicely, “This isn’t going to work for us. He’s not going to be able to do it. He could hear and sense her stress and it totally freaked him out. We’re not going to come back.”

She didn’t flinch. “I understand totally. I’ll get you a refund processed.”

We went back out to the outside pool. Noah sat in a chair for a bit to gather himself, then jumped in and swam better than he’d ever swum.

After a while, a changing of the Lifeguard occurred, and I realized that the one standing right next to me had been this morning’s assistant. She realized it too, and soon we were talking.

She pointed out, “He’s swimming way too well for that class anyway.”

I asked, “Why was she so stressed? Or was it just me getting that vibe?”

“It wasn’t just you. She’s normally a swim team coach. She doesn’t know how to deal with kids who don’t swim.”

“And, apparently, little kids in general.”

So the moral of this story is: stick with swim teachers that come with high recommendations, because some teachers may despise the “swim lessons” part of swim lessons. And if your kid teaches themselves to swim, that might just be good enough. At least for one summer.

5 thoughts on “It’s Not Summer Until Somebody Cries at Swim Lessons.”