As I demanded and expected after surviving last year, 2016 has been going my way. Or rather, Two-Sun-Sixteen.

So much so that, every now and then, I wonder if the whole “Power of Words” thing has something to it. The fact that I named Two-Turd-Fifteen before the flood, before the tornado, before the hospitalization due to tonsilitis, before the tonsillectomy, before the pneumonia on my birthday, and before the wreck seems like it was asking for treachery. And maybe, somehow, naming Two-Sun-Sixteen is setting things back right. Or better than right.

But then I slap myself upside the head and say that’s silly.

But it does make one wonder…

BUT WHO CARES. Because it is now Two-Sun-Sixteen and I am living in a high-pitched frenzy and have soaring levels of optimism and activity. 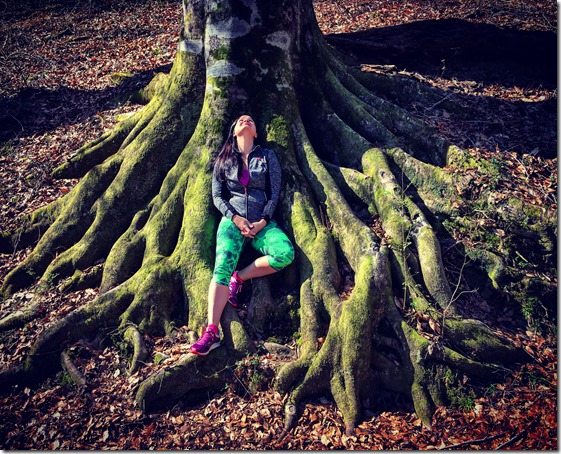 – I ran a half marathon.

– Then I accidentally ran an unofficial half marathon during a random Saturday run – because I got new shoes and it was pretty outside. (Although I was kinda mad that no one was around to give me a medal.) 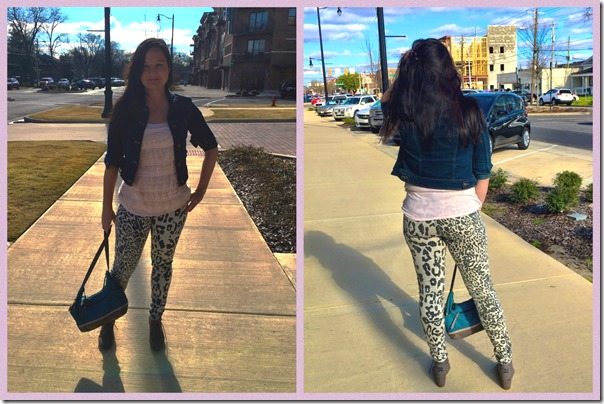 (They were 80% off! That’s a lot of asymmetrical leopard print for free! And I’m frenzied with optimism!)

– I attempted to get purple highlights in my hair. 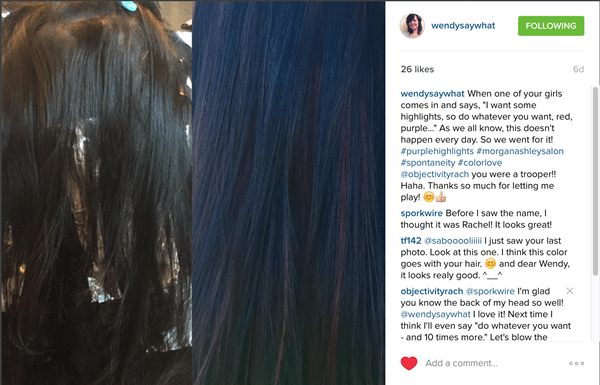 (Actually I told my hairdresser to do whatever she wanted with my hair and she gleefully chose purple. It ended up a bit more magenta, which I’m still absolutely loving, but that’s because she’s been dying it black for so long. Next time, the purple will stick better. And let’s put more in it! Because why not?? FRENZY!!)

– Then I ran another half marathon. …And signed up for a third – three in three months, besides that random Saturday run that rudely did not grant me a medal. 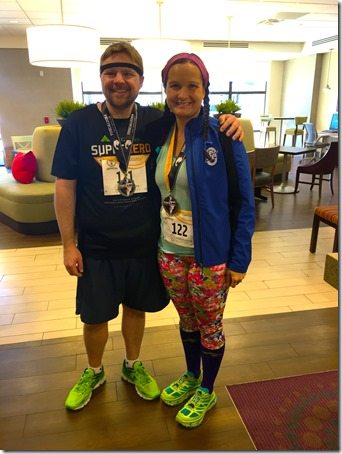 – Then I chose to tackle the complete revitalization, rearrangement, and reorganization of my entire house, with the help of my fantastic friend and blog reader Tara. Plus a few other big changes related to that. But more on that later.

So. In case you haven’t picked up on it yet, I am living Two-Sun-Sixteen in a giant year-long manic episode.

As such, I haven’t made much head room for blog post development lately, because mania takes up a lot of space, so instead of a well-planned and constructed essay, today you get random pictures of my weekend. Because FRENZY!!

So let’s rewind a bit.

Half Marathon number two for this year, The Tuscaloosa Half, is actually my third half marathon overall, because I did this same race last year. Chris booked us a hotel months ago, along with a grandparent reservation for the children, in order to turn it into a grand date weekend. So although the race only lasted two and a half hours Saturday morning, we were gone from lunchtime Friday through afternoon Sunday.

…Which is, by the way, the way to do a race together, if you’re going to do one. Plenty of time for dates and food and being completely lazy and of course photography. 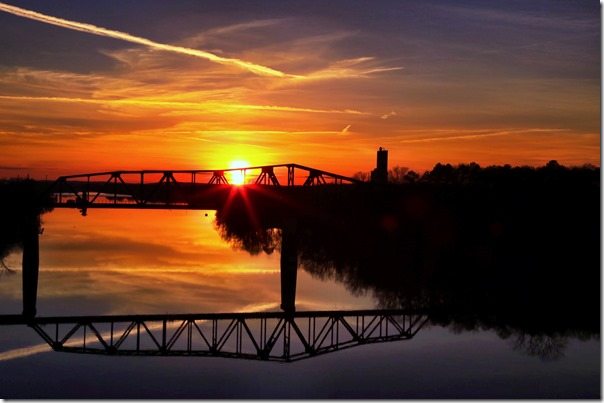 We ate all the carbs Friday night with Chris’ brother and sister-in-law, then got up early Saturday morning for the race. At the starting line, we found Robert (my Physical Therapist) before the race and took the required we’re-about-to-run-13-miles photo, 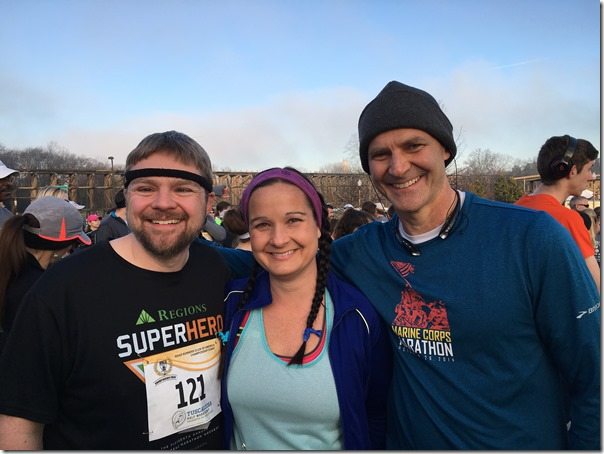 …which turned out to be quite a good photo for me since, during the race, my hot pink sports bra decided to generously bleed its hot pink color on my left boob, thereby making all my finish line and post-race photos a bit…unsettling. 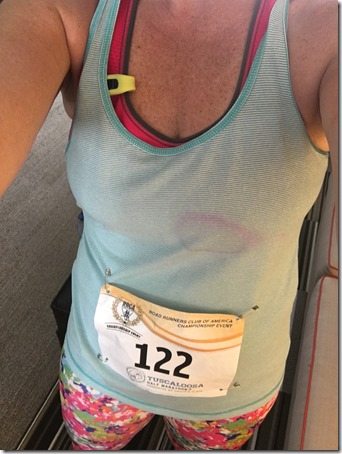 (Why just my left boob? Did right boob not sweat? Did the sports bra company make the right half of the bra not bleedable? So perplexing.)

I did not realize my extremely obvious boob circle existed until we got back to the hotel room much later, and I wanted to take a moment to be embarrassed and indignant that Chris hadn’t informed me of my circledy boob (which he swears he didn’t notice but then the question is why wasn’t he looking at my boob?? That’s what husbands are for! To tell you if you have something in your teeth or on your boob!) But just as I was working up a good embarrassment, I remembered my good friend Tanya’s last marathon.

And I laughed at myself.

(Seriously if you’re a girl or a runner, go read her story and then come back. It’s the best worst race story in the history of running. But beware – there’s a bit of language, and potentially disturbing illustrations. Don’t open it if your four-year-old is looking over your shoulder.)

After the race and a bit of laying in bed, the day was just beautiful, 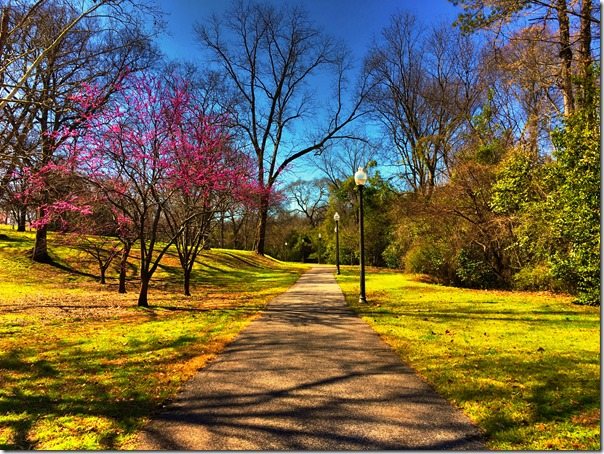 and Chris and I still wanted to be outside. So we set off on a hike at Lake Lurleen State Park – one of my favorite hikes. 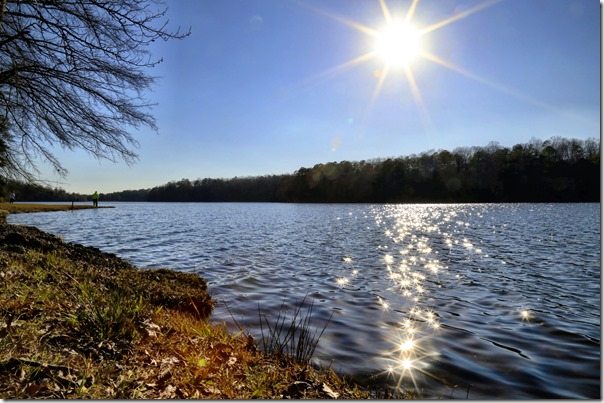 Chris was giddy and really feeling the selfie bug, so I was a good wife and played along. 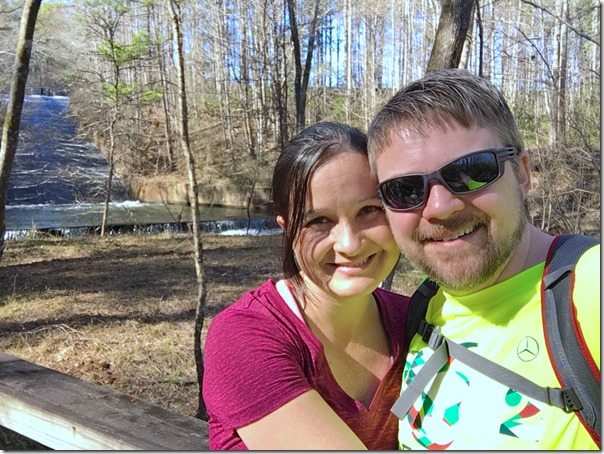 We ate an early dinner and collapsed into bed. I might have fallen asleep at 7pm. For the first time since I was six.

The next morning was equally as beautiful, so Chris found us another hiking adventure – this time at Munny Sokol Park – somewhere neither of us had ever been. I texted a few friends to make sure it wasn’t the Leakin Park of Tuscaloosa, and then we set off.

It was actually quite lovely, and not a dead body to be found. 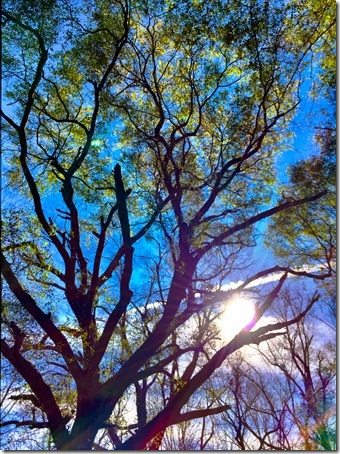 …Not even on Lower Psycho Trail, which only led us to this lovely creek…that did smell kind of funny once I got close enough for this picture. 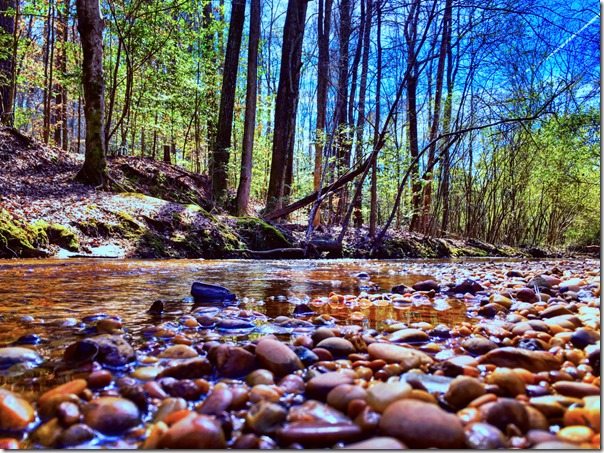 When we headed back to Tuscaloosa for lunch, there was actually at train stopped on the beautiful train trestle that goes across the Black Warrior River, meaning that I was required to take a few more pictures. 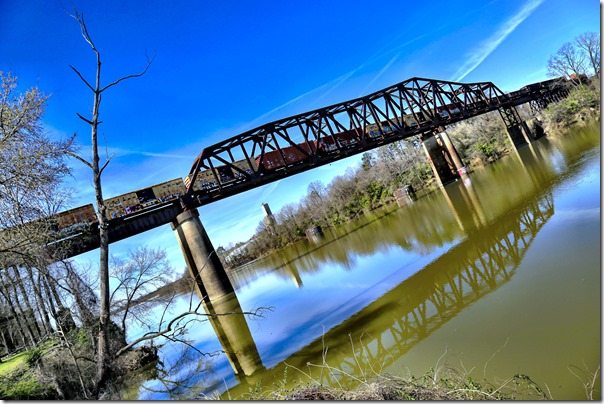 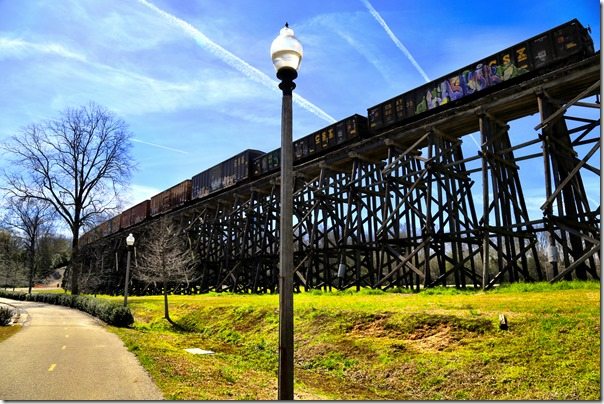 And even better, the train possessed some awesome graffiti, 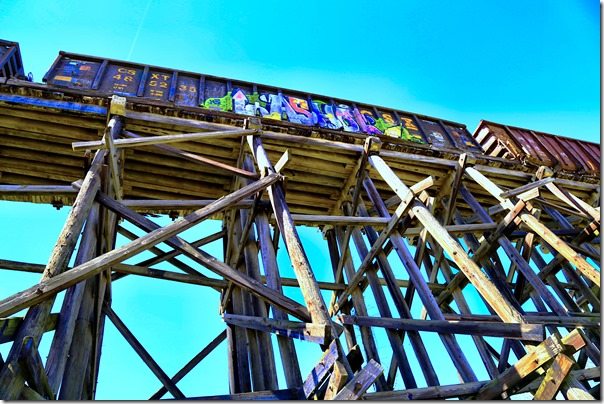 EVEN a smoking pirate Santa. 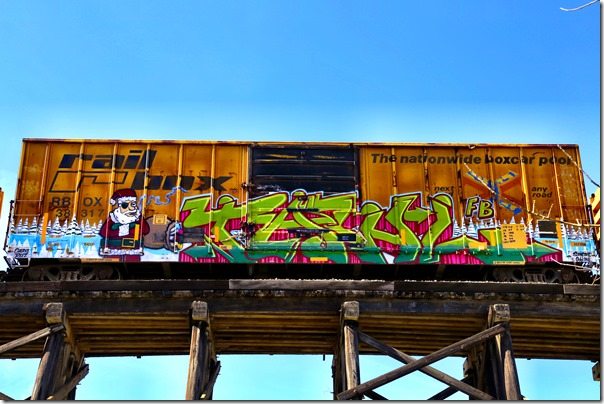 We headed back to town, and I texted my Mom to see when she wanted us to pick up our dear children, children that I was positive had missed us tremendously and were ready to see us again.

Except that one of those children interrupted our text conversation to argue. 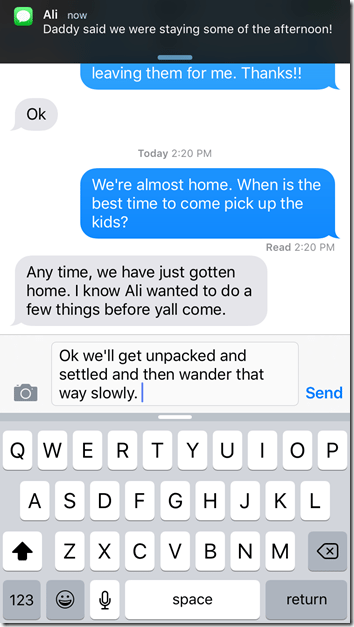 …and then proceeded to screenshot a text from her father as proof that she should be allowed to stay out of our presence for a little bit longer. 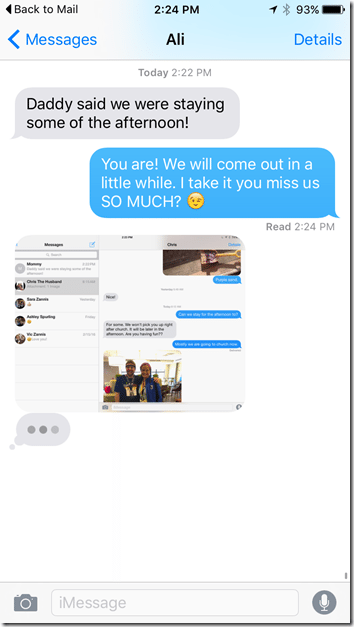 This is modern parenthood, y’all.

We waited until sunset to retrieve our children from Grandkid Heaven, 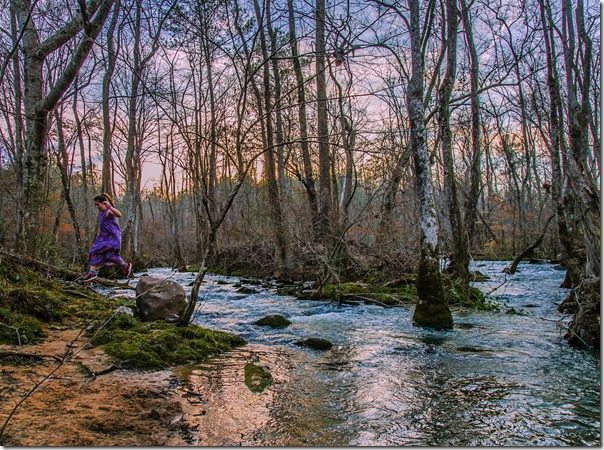 where our ideal weekend of loveliness was finished off with a gorgeous sunset. 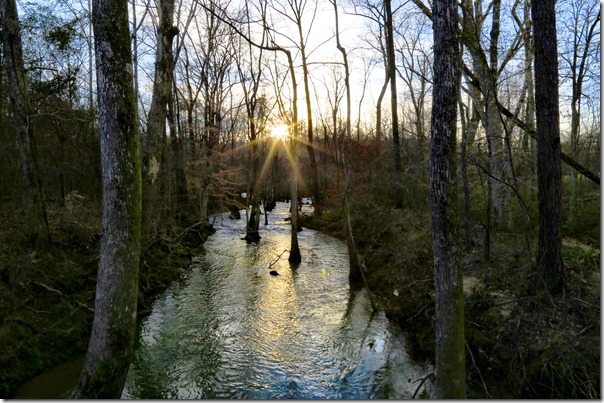 …I even bothered my parent’s neighbor’s sheep (and therefore sheepdog) to include them in the picture. 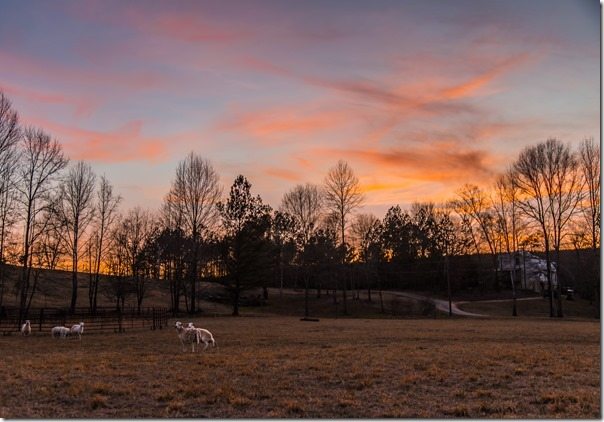 And so, I will get back to my mania of Two-Sun-Sixteen, maybe with a couple less blog posts than two-turd-sixteen because FRENZY! And I will wish that your year is going just as insanely fantastic.

4 thoughts on “Living Two-Sun-Sixteen To the Fullest.”