So I’m a complete idiot.

As I told you yesterday, I spent a year trying to decode Siri’s ridiculous reminders – and it turns out, it was all my fault.

I realized why Siri couldn’t understand me just a few hours before reader Sheri commented the solution. So Sheri, I just want you to know that you’re way smarter than I am because you realized it in the time it took you to read the post, and it took me only 365 days to solve the puzzle.

1) You can change the actual language of your phone to English (Australia), which is what I formerly did, or 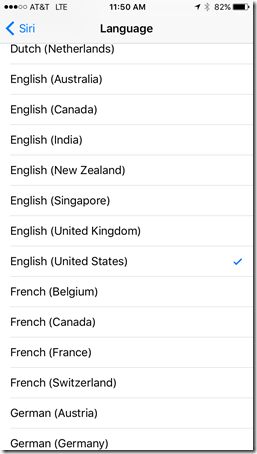 2) You can change the accent of Siri to Australian, which is what I should have done. 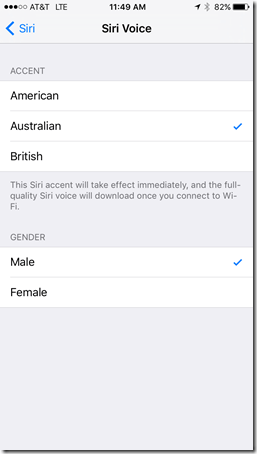 (In my defense I don’t think these features were so clearly separated a year ago when I fell in love with my male Australian Siri.)

The difference is that option one actually changes the language of your phone to Australian English, which means that Siri was trying to listen to me with an Australian Accent (hence why he spelled “pajamas” “pyjamas” and how he somehow pulled the word “Mandaribba” from me saying “Neurosurgery.”) With option two, he’s listening with American English ears and just speaking back to me with an Australian accent.

I tested it by dictating a text message to my Mom in both options. I spoke quickly and clearly, and the only difference is that I said “Kids” with setting one, and “Children” with setting two:

Setting one – the wrong setting: 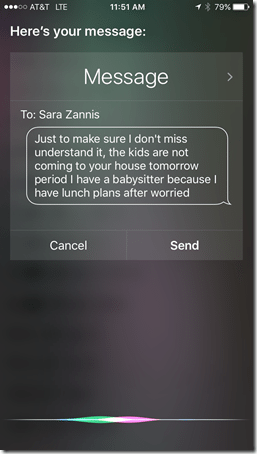 Setting two – the correct setting, with 100% accuracy in listening: 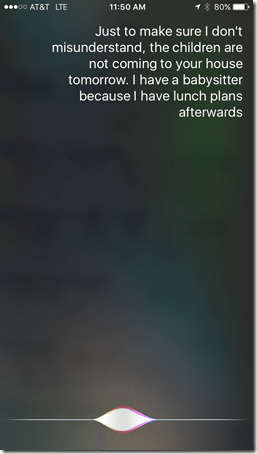 Unfortunately, this means I won’t have a follow-up post of insane reminders next year.

But fortunately, this means I will actually understand all of my reminders from now on, and will have to apologize to less of you for forgetting that I promised to Mandaribba your pyjamas in the mail.

4 thoughts on “How to Clean Out Siri’s Ears.”