I don’t ask Siri for much. Or at least not for a large variety of things. My requests almost entirely consist of “What time is sunset?”, “What’s the temperature today?”, and “Remind me to…”

But the reminders…they age me. I’ve watched in awe as my friends dictate giant novella text messages to Siri and she miraculously gets every word right. I don’t understand. I don’t think I have too (relatively) strong of an accent, but she never grasps even the simplest of my statements.

As I write this post, every time I turn on my phone, she’s reminding me of this. 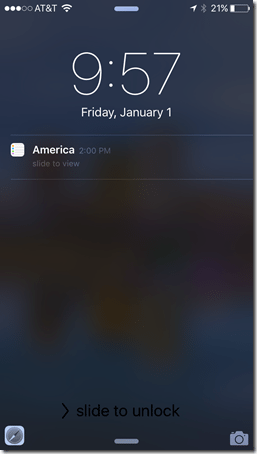 What I TOLD her to do was “Remind me to write a check for Meredith.” Yet she just went with “America.” And, as I always do, I rolled my eyes and trusted myself to remember what that meant, because I was too lazy to go in and edit the reminder. And, so far, I’m succeeding. But it’s not always that way…and it’s certainly not that way when I go back through my undeleted reminders from the entire year, mystified at the bizarre things that Siri reminded me to do.

Such as in April, when I needed Eggs and…an Iron Tribe workout? Downton Abbey? Orangutans? I have no idea.

And in May, when a dudley needed a picture and I needed a teacher. But after all, what homeschool Mom doesn’t want to call in a substitute in the month of May?

Later in May, I appear to be buying a present for the IRS.

(Interpretation: I’m pretty sure this was a reminder to wrap Tessa’s present.)

In June, though, I have no idea what girl I filed away into the proper alphabetized folder.

This next one gives me the vision of being Barney Fife, putting a Bar-B-Q accessory behind bars.

(Interpretation: I’m pretty sure I asked Siri to remind me to book the Girl’s Trip.)

Later in June, I suppose I was creating a cryptic code to request northern Coke.

And this one…on Chris’ birthday…I have absolutely no idea what I was wanting to remember to do. But I’m frightened.

I think “Emmas on water” equals “Amazon order”…and maybe I was mad because I couldn’t finish my order on my phone so I was complaining to…my phone? Because that’s an efficient use of my emotions.

In September, it appears that I might have gone on a Green Beret secret mission.

(I think a.l. dark calm would be referring to al.com, but I don’t know how to Z a website. I swear, CIA.)

Things were odd in October…if someone looked at my reminders I think they’d want to give me a drug test.

And I DO NOT TAKE PICTURES OF MINIONS, Siri.

Speaking of drug deals, December sounds like I was pulling one off for my friend Carla Jean…

And also that I was perhaps creating a new BBT drama later in the month.

But this one…just frightened me.

I think Siri is booking me a flight now for an experimental Malaysian surgery.

Your prayers and thoughts are appreciated.

Update: I solved my Siri problem. And I am an idiot.

14 thoughts on “A Year of Siri’s Helpfulness.”