Chris’ Aunt Kitty and Uncle Leo came in town for Christmas celebrations. They were staying at our house, despite the fictional package thief that surely puts our neighborhood in the Top Ten Least Safe Places to hang out.

Since the weather was ridiculously hot over Christmas and the following weekend (even bringing tornadoes and what-not), one night Kitty and Leo were outside in our yard after dark.

Kitty came running in, looking rather scared, and told me, “Somebody just drove by and asked me if I was a Callahan – in an ominous voice!!”

“Well, I was outside, and I saw a car coming, then the car started slowing down so I started back toward the house just in case somebody was about to jump out of the car, and then they rolled down their window and said, ‘Is that a Callahan?’ So I stammered and said, ‘well, yes, but I’m an Aunt…’, and I took off back to the house. And they just drove away!”

“What were they driving?”

She described the car, and I began mentally taking inventory of our neighbor’s cars, looking for a match.

Of course it was.

“Was she young? Long hair?”

“It had to have been Renee.”

So I texted her. 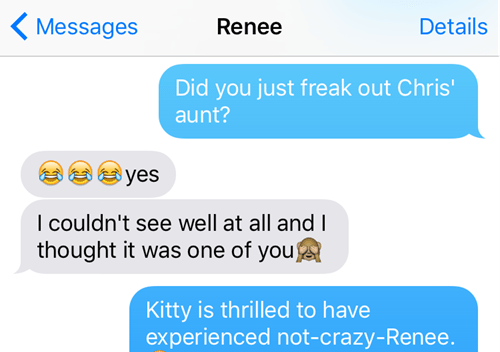 We all laughed about our incredibly vigilant neighborhood watch while the children listened, puzzled. Ali, who is just old enough to be concerned with understanding context and nuance, asked, “When you say ‘Not-Crazy-Renee’, is the ‘Not-Crazy’ part sarcastic?”

Which I immediately informed Renee of Ali’s confidence in her. 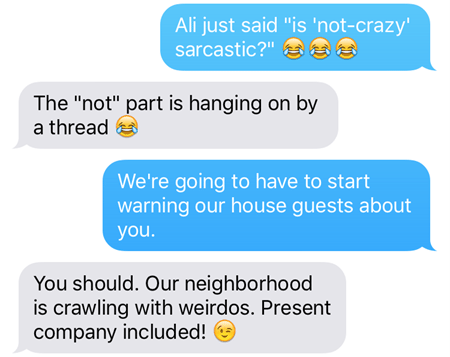 Now. It deserves noting here that dear Renee is really not-at-all crazy, and was just the victim of overfriendliness, darkness, and the allure of Christmas Cheer. She had driven the long way back to her house so that she and her children could bask in the delight of our house’s Christmas lights. While she was driving up, she noticed someone out in the yard and assumed it was one of us. Too dark to tell for sure, she called out a friendly greeting (one that Kitty apparently didn’t hear as she was backing away from the vehicle that was certainly up to no good in her mind.) When Renee didn’t get an answer, she yelled out, “Is that a Callahan?” in a joking tone.

But alas. Perception is everything. And when all you hear is a grilling of the status of your surname by an unknown car in the dark, you naturally go to a fearful place. Poor Not-Crazy-Renee had been set up by the world.

Later, after the children had moved on, I was still marveling over  Not-Crazy-Renee’s yard occupant check. I texted her.

She texted back, and I read her text aloud to Kitty and Leo.

“Renee says, ‘I will be leaving slips of paper in everyone’s mailbox with a randomly selected ‘Neighborhood Password’ on a bi-weekly basis. I will then patrol the neighborhood in the evenings, and anyone who is unable to produce the password will be harassed, or shot on sight, depending on my mood. Be sure to inform your guests.’”

After I finished reading it, I looked up to see Leo’s face scrunched up in disgust. “Are you KIDDING ME?!?”

Clearly he wasn’t buying the “not-crazy” modifier either. Or she’d spooked him more than he’d let on.

I went back to Not-Crazy-Renee and informed her that Leo took her quite seriously.

Then again, the Leo in question is Toenail-Art-Making, Crochet-Shorts-To-A-Formal-Ball-Wearing Uncle Leo. So he may or may not be the best judge of crazy. Either that, or he and Not-Crazy-Renee are such kindred spirits that he naturally believes in her.

14 thoughts on “Not-Crazy-Renee and the Holiday Houseguests.”