I was angry.  But then, I had a right to be! As I arrived at the airport and turned in my rental car, I received a text message that my 10:15 flight was delayed until 2:30. Why couldn’t they have sent the text 15 minutes earlier? At least then I could have kept the car and seen the sights that were to be seen in beautiful Appleton, Wisconsin.

As I approached the ticket counter, there were several other travelers in line in front of me. All seemed to have the weariness on their face that I was feeling. When I finally got to an agent, she was quite helpful, seemingly not affected by the other travelers that were as angry as I. She informed me that there was a mechanical issue on my original flight and that they were bringing in another airplane for us, causing the delay. She dutifully checked other possible flights and connections, through different airports that would get me home at some hour more palatable than the 9:48pm now scheduled (instead of the 3:15 I was originally scheduled to be home.) No dice. I was to sit in Appleton for the next four hours, then sit in Detroit for FIVE hours, because the delay would cause me to miss my connection.  I could feel my anger rising.

About an hour in to my wait, I got another text from the airline. My delayed flight had been rescheduled now to 12:30. Good news. I could now make my connection in Detroit and all would be well. I gathered my possessions and trudged toward the gate.  Boarding seemed to take an extra long time and I wondered for the thousandth time why they load airplanes front seats first. Although we were the only plane leaving Appleton, we sat interminably at the end of the runway. The pilot finally came on the intercom and explained that Detroit Central was trying to work us in to the landing queue, so we would have to wait.

Finally airborne, the flight attendant barely had enough time to get down the aisle with the drink cart before we were on final into Detroit. The weather was bad and it was a bumpy ride. Our gate must have been at the other end of the airport because we taxied for at least 20 minutes. As we got off the plane, I realized that unloading is only slightly more efficient that loading. I checked with the gate agent for my next gate – B-15. We had arrived in A terminal. Good thing I had carried on my bags and not checked anything – if I hurried, I could still make the flight. Rushing from the end of the A terminal to the center, down the escalator and through the quarter mile long tunnel to the B terminal, turn left and hustle down to gate 15.

No one was around.

No airplane was at the gate.

I went across the concourse to gate 14. After waiting for two other passengers to ask their questions, I finally got to the agent. No, the Birmingham flight at B-15 had left four hours ago. The 3:10 flight is at A-43. ARE YOU KIDDING ME!!!

Back through the B concourse, through the now half mile long tunnel, up the escalators turn right and run to the gate. Just in time to see the gate agent close the door to the jet way. “I’m sorry sir, you weren’t here, we allowed a standby passenger in your place.”

HOW COULD YOU DO THAT? YOU KNEW I WAS ON MY WAY HERE! I WANT TO SEE A SUPERVISOR!

I tried to calm down, and succeeded, but only a little. When the supervisor arrived I calmly explained the events of my morning, although through clenched teeth. He listened carefully, repeated back the story to me in order to let me know he understood then apologized for inconvenience.

INCONVENIENCE! This was going to go down in memory as one of the worst travel days in memory!  And I’ve had quite a number of bad travel days – MOSTLY ON HIS AIRLINE!

He did offer a food voucher so that I could at least have a decent meal while I waited the FIVE HOURS for my flight. I went to my new gate (in Concourse C no less) and settled in to wait. And wait. All the time fuming about my “inconvenience.”

When we finally boarded I settled into an aisle seat, calmer now and beginning to realize that I was only an hour and a half from home. It’s going to be okay.

Then she came in.

She looked to be about 25. She had a baby strapped to her chest and a toddler in tow. They, of course sat in the seats directly across from me. She was struggling with her carry-on bag, a diaper bag, a booster seat, and the toddler. I helped her get settled, putting her carry on in the overhead as she dealt with the toddler. The baby was fussy and I was beginning to think that my bad day was about to continue. Sometimes babies don’t react well to cabin pressurization and scream the whole flight. Great.

Luckily, all three of them were sound asleep by the time we had taxied out and headed for Birmingham. It was a quiet flight and I had a little time to reflect on the day – trying to put my anger behind me and focus on the fact that I would soon be home and I could sleep in my own bed. I mused about the marvel of modern air travel in general and how you could wake up in Appleton, Wisconsin or San Francisco and sleep in your own bed that night 2500 miles away.

I also began to think about the times that things hadn’t gone the way I planned, but somehow God had worked things out in the end. Things I could never imagine. Things for His purposes, not mine. But in the end, looking back, His hand was undeniable. This seemed to be a lesson I had to learn over and over again.

My quiet reflection was interrupted by the pilot. He informed us that there were severe storms right over the Birmingham airport and we were going to circle for a while over Huntsville and see if they would clear out in time.  He said that we had about a thirty minute window, then we might have to land in Huntsville, refuel and wait out the storms.

Instead of anger or a feeling of inconvenience, I felt a reassurance. Reassurance in the fact that the airline was making judgments made on safety concerns, not flight schedules. Reassurance that God was in control, even of this. We circled for a while and every circle when the plane turned north, I was treated to a beautiful sunset in the west. And when the plane went west, I could see the thunderstorm over Birmingham lighting up the sky.  I reflected on the beauty and precision that is creation. 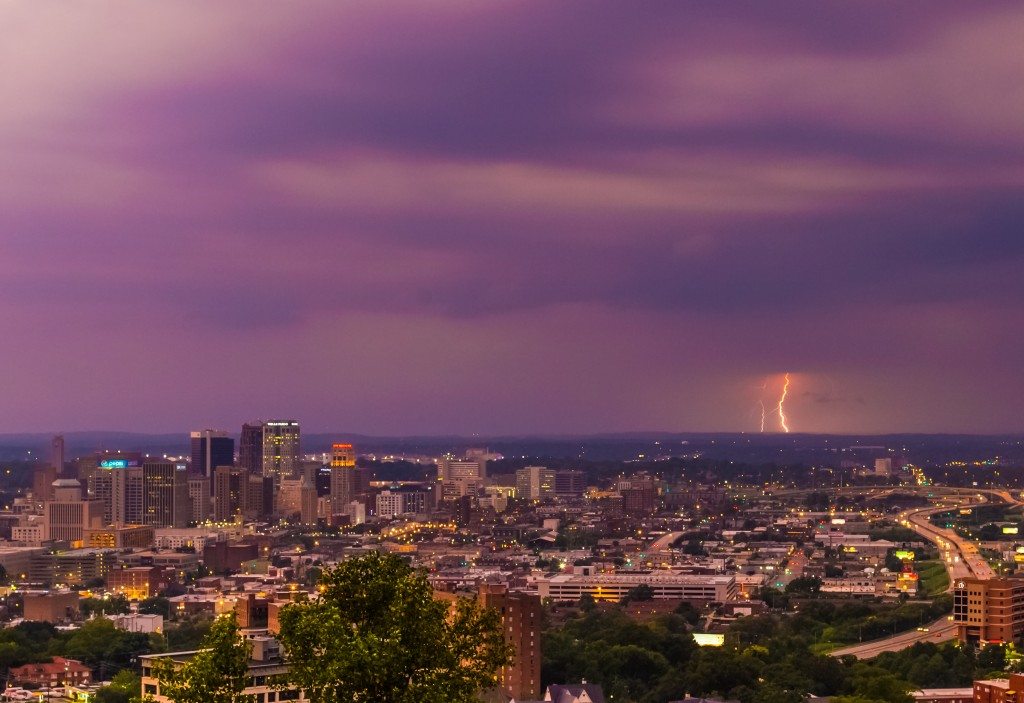 (Meanwhile, Rachel was on a mountaintop photographing the same sunset and storm over Birmingham.) 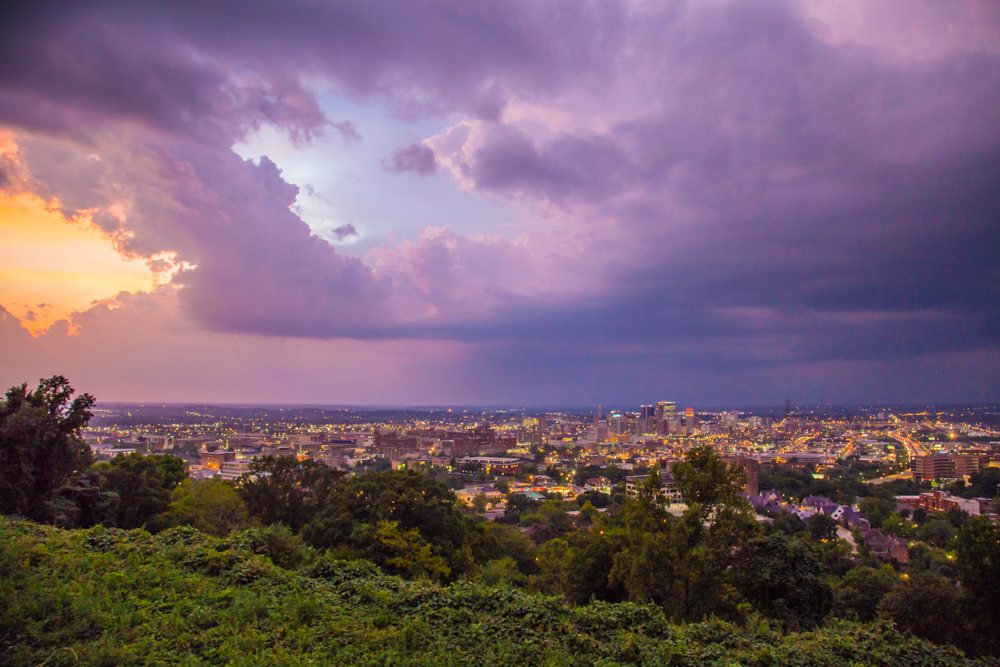 The fuel window closed and we began to descend into Huntsville. The flight attendant informed us that we would deplane into the terminal and would would be given further information there.

The young mother woke up and asked me what was going on. I explained. She didn’t seem too surprised. She began to rouse the toddler and try to position the sleeping infant back into his carrier. I asked if I could help in any way. She looked at me and asked if I could hold her baby. I was glad to. He snuggled up on my chest and continued to sleep soundly. Mom began to try to get everything organized and I made a casual remark about her bravery, traveling with two kids and all. Three actually, she corrected me. Her husband was in the back of the plane with their five year old. They were a military family, headed home to a small town outside of Birmingham for the first time in two years. From Germany. For her husband’s fathers funeral. They had been traveling for about 36 hours, she thought – she had lost track. Still she had a smile, a weary smile, but a smile.

I helped her with the toddler and her carry-on bag to get down the stairs (no jet way, we deplaned onto the tarmac) and her husband and other son came off the plane a few minutes later.  The Dad had his arm in a sling, having had shoulder surgery a few days before.

The gate agent informed us that the flight crew were at their max hours, and so there would be a bus arriving to drive us the rest of the way to Birmingham (two hours by road), and that we needed to gather all our belongings and wait at the curb. I went to baggage claim with the young family. They had four bags, three car seats and several other items.

“That wasn’t a question,” I told him. “That was a statement.”

I gathered what I could and we made our way to the curb. I could see what appeared to be some moisture well up in his eyes. “You are the first person to offer us any help since this trip began. Thank you.”

I felt some moisture in my eyes, too.

The bus trip to Birmingham was thankfully uneventful. As we arrived at the Birmingham airport around midnight, I saw a woman on the sidewalk begin to run along beside the bus. When we came to a stop, she was waiting on the young family. When they got off the bus, she hugged everyone, but scooped up the toddler and infant. It was then I realized that she was a Grandmother meeting two of her grandkids for the first time.

I helped Dad unload their bags and car seats from the belly of the bus.  When all were piled on the curb, he stuck out his hand and thanked me profusely. Mom introduced me to the Grandmother, who was still clinging to her grandkids. She thanked me too.

They were thanking ME. I felt ashamed. Here they were, away from family, serving our country and returning home under these circumstances, and still were able to manage a smile.

And then I realized that possibly God had orchestrated my whole inconvenient day to be here to help this young family.

But as I sit here, writing these words, I realize I was not the blessing to them. They were a blessing to me.

God had used my whole day not (only) for me to be there to offer my meager help, but to teach me something. I too often get wrapped up in my own world, outraged at seeming inconveniences, angry when things don’t go as I plan or envision. My plans are so short sighted. My vision is so limited. God grant me wisdom.

“’For my thoughts are not your thoughts, neither are your ways my ways,’ declares the Lord.”
-Isaiah 55:2

27 thoughts on “Lessons Out of Appleton.”