While I’m recovering from my Tonsillectomy, I asked a dear friend to write a series of guest posts that just need to be shared. I guarantee that you will adore them as much as I do.

My husband and I and our two kids live in a far away place. A far, far, far, far away place. We have no power lines – well, that’s not exactly true, as there are massive multiline hydro towers running straight through our mission base. But all of that electricity is being sold to a neighboring country – there is nothing our local village can use. Up until recently we had to build a fire under a 50 gallon drum to have a hot shower in our home, but thank the Lord we have running water and a flush toilet so I am NOT complaining. We live in a comfortable home on our mission base. Large generators provide power 10 hours a day during the week and 4 hours on weekends.

There are many things about our life here that used to make my jaw drop, but now seem normal to me: the gecko that poops above my head at night (we have a net over our bed so it doesn’t get on me… but still… used to gross me right out!), being woken every morning by our neighbor across the river’s dogs/roosters/screaming baby/fights/cow/laundry whacking/etc., seeing twenty chickens tied to the handlebars of a bicycle and a pig on the back luggage rack with a goat tied to the cross bar – all of them ALIVE and being cycled down the highway, spiders the size of my hand and the hordes of light-seeking bugs that descend on our home after the first rains each year (I swear it feels like a biblical plague). But the sights, smells, and tastes of our host culture that once seemed so strange now feel like home to us – even the digestively regular gecko.

We still have a lot to learn – much more about the culture, the foods, the languages, and many other areas I am sure we have not even thought of yet in our six plus years in the field.

As we have been bumbling along, we have had a few missteps – times where we have misunderstood something, not noticed a cultural cue, or been in a situation where we are the only ones who seem to see the ridiculousness. Sometimes these situations involve topics that don’t exactly lend themselves to being shared on our ministry forums. And yet, they show a side of missionary life that I don’t think many people realize exists. It’s not all praying and teaching and cuddling cute kids – there’s an awful lot of awkward situations that make up our lives here that we just can’t share at church on a Sunday morning.

Topics like boobs, demon casting baptisms, snakes and oh, so much more.

And so, after years of reading Rachel’s blog and emailing with her, she mentioned to me that she would love for me to share some stories with you – anonymously of course, to protect the privacy of some of the individuals mentioned in the stories, which although funny and awkward and crazy, are still about real people in real places and the stories oftentimes have very serious endings. I hope you will enjoy the craziness with us, and take the stories as they are intended – a light-hearted look at the awkward situations we encounter here, not an attempt to ridicule or embarrass anyone. If you think you may know who we are, please help us to keep these posts Google-free by not saying my name or location or any identifying info in any comments you post – Thanks!!! (But please do comment – I love comments!)

So now, for the first in my installment of Missionary Stories…

We see bosoms a tad bit differently around here.

When we first moved to this country, a departing missionary told us that we would notice something straight away – “Back home, boobs are like an amusement park. But here, boobs are a factory – they provide a service and a product and that is it!”

And it’s true – at home, people are either flaunting what they got or enhancing what they got to get the approval or admiration of others, or on the other hand FREAKING OUT when a woman does what is completely natural and breastfeeds her baby in public.

Here, women cover up their boobs as much as possible, unwilling to draw attention to them. UNTIL it’s time to breastfeed, at which time they whip them out as if they were a teething toy or paci that is conveniently attached to their body so it never gets lost. 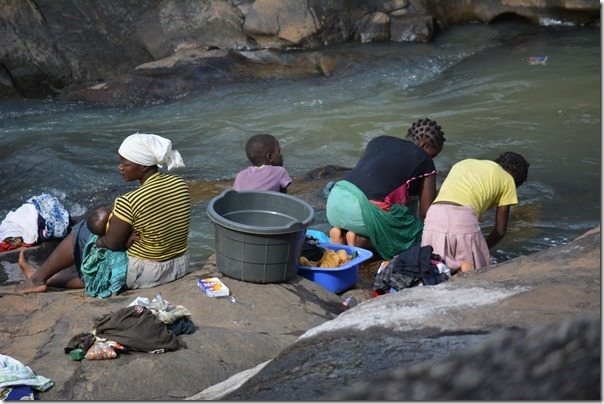 No one even bats an eye, except for the poor unsuspecting volunteers visiting that we forget to warn…and trust us – with bras almost nonexistent here and most women having a baby every two years or so from the time they are married (often at 16 or younger), boobs here very quickly lose any attractiveness they might once have possessed. Gravity does its work quickly and more than once we have seen women with their boobs hanging near their waistlines.

Low hanging boobs are actually the norm – there is one woman in our village who had twins and she can breastfeed them BOTH at the same time- one in a wrap on the front, and one in a wrap on her back – let that sink in for a second. She literally flips one boob up and over her shoulder, and the child on her back pops their head up and can suckle.

(Aside from Rachel: If you don’t have “Can you throw it over your shoulder like a Continental Soldier…do your boobs, hang, low” stuck in your head right now, then I’m impressed.)

In our first months here on the field we quickly adjusted to seeing boobs whipped out like a pacifier just about everywhere – in church, my hubby had to get over the awkwardness of preaching while numerous women had their entire boob just hanging out of their blouses – at one service I watched him try to keep preaching straight-faced and focused while a teenage girl in the front row teased her baby brother by pulling her mother’s breast away from him, then giving it back, only to pull it away quickly again.

I just can’t even.

It was all I could do not to laugh as my husband, red-faced and trying not to cry while nearly laughing himself, attempted to find a place to look aside from the crying baby, teasing teenager and completely oblivious mother attached to the boob directly in front of him.

One time a group of our visitors were helping at the home of local granny – a woman who was known for being a bit outlandish. She lined each of the volunteers up and proceeded to measure their boobs by squeezing them like supermarket produce, then made a proclamation from her own wisdom as to how prepared they were for feeding a baby based on her “scientific findings.” I was stuck between being mortified and finding the whole thing hilarious, but did have to do some explaining to our completely shocked visitors after we left.

And then there’s…“The Boob Story.”

One day while walking through our local town with one of our staff members, my husband saw a woman in a nearby yard standing topless. She was a young woman, so gravity had not yet taken its toll, and my husband was shocked to see her topless in public (as mentioned women here normally cover up unless their baby is feeding or in need of the pacifier.) But what REALLY shocked him was the other woman – the one on her knees with her face literally buried in the first woman’s chest.

Kneeling woman had her hands on standing woman’s boobs and was squeezing them, much like it might look if a man were…making out with a woman…to put it in delicate missionary terms.

My hubby calls it “going to town on them.”

His first reaction was of shock, horror and extreme embarrassment, and he turned to our staff member, thinking that this looked a whole lot more like an amusement park than a factory.

He quickly asked “What on earth is going on over there?!”

“Oh that?” replied our worker, completely unfazed by the obviously pornographic scene that my husband was witnessing, “The clinic wasn’t open today.”

(As if that explains a woman burying her face in and playing with another woman’s bosoms.)

After quite a bit more explaining, my husband came to understand that the lady on her knees had been on her way to her field when she had been sprayed in the face by a venomous snake. Since our small clinic is closed on the weekend, there’s only one place the locals know of to find pressurized, sterile liquid with which to rinse one’s eyes of poison and prevent blindness.

Breastmilk from a lactating woman.

Just another normal day in the missions field.

I have informed my husband that if a snake ever sprays him in the face on the weekend…it’s probably best if he just goes blind.

So. What have we learned today?

21 thoughts on “The Stories That Missionaries Can’t Tell You.”