If you’re reading this, I survived my surgery enough to hit “publish”.

I thought about publishing it automatically, but then what if something went horribly wrong? Did I really want this to be my last blog post?

Because these are the things I think about. Which is why, on Tuesday night, I was having that conversation with Chris where I tell him our bank account passwords and such. After the seventh password and him shaking his head and muttering the entire time “I’m never going to remember any of this”, I just suggested, “You know what? Why don’t you just take $40K from my Life Insurance payout and hire an accountant to sort it all out for the first year.”

To which he said, “You think I don’t already have a backup plan? With all the sickness you’ve had in the past two years?”

“Yeah. I have Plan Alpha, Plan Beta, and more. That’s right – I have multiple backup plans.”

He has his own plans upon my passing.

See if I try and tell him any passwords ever again.

Today is the day.

I get to go from this:

It’s so nice of Apple to have an “Infected Tonsil Emoji” and “Tonsil-Free Emoji” just for occasions such as today – especially since they’ve failed us in so many other ways like simply giving us cheese and bacon (and poop with emotions.)

Despite Chris’ Family Body Parts Collection, he has decided that he does not, in fact, want my tonsils. Perhaps it was this Tonsil Keepsake Box convinced him how very much he didn’t want them. 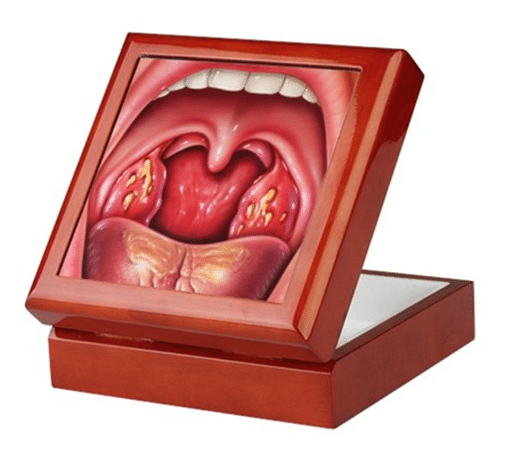 Or perhaps it was all of the times in the past month that I’ve made him look at my throat with a flashlight. But whatever the reason, I’m relieved – because it’s always less creepy to not have to ask your surgeon for your removed body parts.

I’ve been preparing for the ridiculously long recovery that is advertised with a tonsillectomy, but it’s hard to get others to understand it – it does, on the surface, seem like an easy surgery.

One conversation I had this week, in trying to explain why I’d be away from life for a while, went like this:

Friend: “I don’t understand. Tonsillectomies aren’t a big deal for kids. Why do you think it’s going to be such a long recovery for you?”

Me: “Apparently it’s way worse for adults than kids.”

Friend: “Oh I see. You mean…you mean like a circumcision?”

Me: “Yes. I’m having an Adult Tonsil Circumcision.”

So it’ll be a little while before I’m back to blogging, but I will have an absolutely delightful and very special guest next week. I promise that you will NOT want to miss this precious set of stories.

Have a great Memorial Day Weekend. No – a doubly great one – one for me and one for you.

Because this will be what I’m doing.