This is a series of stories featuring very real things that happen to missionaries that just don’t fit in on the Sunday School slideshows. See the first post for an introduction to my anonymous missionary friend, along with the whole story behind missionaries and boobs.

But this one is The Ultimate Story. Although I am still going to share one, maybe two more of her excellent stories next week (I’m STILL recovering from my tonsillectomy, guys – it’s the worst), I couldn’t wait any longer to put this story up. Enjoy.

Let me preface with this: I understand that this is a serious and sad subject, but please understand how on earth it would have felt to be confronted with this situation, which is why I need someone to share it with.

This is the story we really can’t tell – this is not only not acceptable for Sunday Mornings, but it’s barely acceptable to type. (You’ve been warned.)

But. Tell you I will. Because I told Rachel once and she said I NEEDED to tell you. (So blame her if the warning wasn’t sufficient to make you quit reading.)

We had a volunteer group of medical professionals at our farm several years ago. Despite the fact that we run several medical clinics, it seems whenever groups of foreign doctors/nurses/paramedics show up, we have a plethora of people requesting home visits and assistance daily.

This is never more true than when said medical professionals are a bubbly group of young, attractive, recently graduated, female nursing students.

All sorts of illnesses start popping up – old tuberculosis cases that have long since been treated, common colds over exaggerated and described as if they were causing near death, and mystery illnesses that cause our local people to suffer greatly.

On this particular day one of our staff asked for care for his Father-in-Law. Here is the conversation:

Worker – “Can the nurses come visit my father-in-law? He is broken.”

Me – “Sure, no problem. What bone is broken? We will bring a splint so he can get to the hospital.”

Worker – (Holding up his arm and bending his hand to the side) “HE is BROKEN!”

Me – “Okay, we will bring a small splint for his arm then…”

Worker – “No! HE (points to his crotch) is BROKEN.” (repeats arm held up with hand to the side motion)

(If you haven’t caught on yet let me lay it out for you. His father-in-law had broken his penis. There. I said it. This feels so unmissionaryish.)

When we arrived to do our evaluation of the father-in-law, he was lying in the shade wrapped in a piece of cloth traditionally worn by women in this culture – that should have been our first warning. He very carefully got up and moved to a small hut, and we explained that we needed to see the uhh…err…injured area. 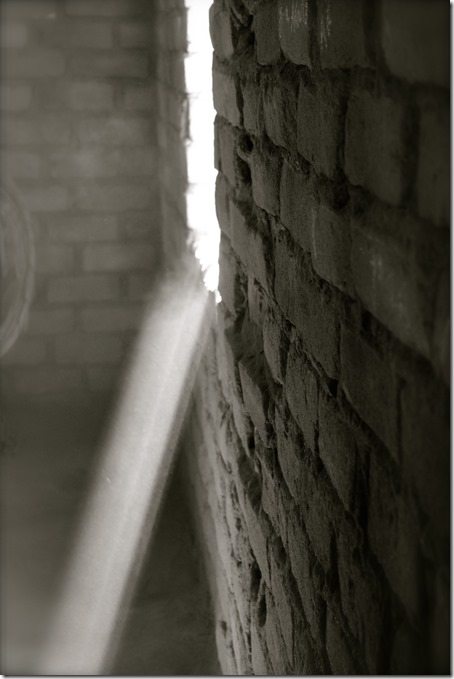 Now I am not a nurse and I live here – I might see these people again! I had no desire to see any bit of this, but since our visitors don’t speak our country’s official language and neither did the father-in-law, both myself and our worker were required in order to complete a rather long chain of translations. Nurses spoke to me, I translated to our worker, who translated to his father-in-law and then back again. I chose to stand outside the door while several of the nurses and their instructor, my friend who is an experienced ER nurse, went inside. The first thing I heard was my friend gasp loudly followed by the sort of noise that one makes when one smells something so awful that they cannot contain the reaction. {Think middle of a heat wave in Texas, and someone left a whole boatload of rotten shrimp in the middle of your non-air-conditioned living room while you were on vacation and you just walked in.}

It was at that point I knew we were in trouble.

If the ER nurse can’t handle it, nobody can.

After much translation it was discovered that the father-in-law had been diagnosed with and treated for a severe sexually transmitted infection. He had been advised to stay on heavy doses of antibiotics for an extended period of time, and most importantly, not to have sex for an entire year.

He had not listened to any of the advice.

The nurses decided that they needed some outside input and asked if they could take a photo to get an STD Specialist from home to take a look. But of course, none of them had a camera. Or a phone. So they asked for mine.

Then the problem became that not a one of them knew how to use my DSLR camera.

And so I was called in.

I protested greatly. I said surely there was another way. Maybe we could wait for my husband to arrive?

So in I went. I am not exaggerating when I say that his penis was so swollen it was about as big around as a two liter coke. (Perhaps just a TAD smaller.) It was cracked, seeping and oozing, and bent at a right angle. From what we understood, when he urinated, because the “inside plumbing” was also broken, a good portion of the urine would leak back into his body, which had created a septic environment, an unreal odor, and a raging infection.

And the nurses needed a picture of this. So I snapped one from the door.

Oh no, they said, we need a close-up.

You know the bad thing about DSLR cameras? They don’t have any fancy digital zoom. If you don’t have a honkin’ huge zoom lens with you, your only option for “zooming” is moving your feet.

In my case, moving to stand beside, and at the nurse’s direction, BEND OVER this guy and take a photo of his quite infected nether regions.

I have never ever in my whole life been more mortified.

After snapping the photos from various angles (because of course they needed ALL the angles), I composed myself and gave him our standard “after medical care” talk.

We encourage patients to take all the medicine we give, to not take any other medications and most importantly, to not go to the witch doctor or take any of their medications while they are taking the ones we gave them, because they could mix together and cause even greater problems. Also, we explain about God and how much He loves us, that His power and Spirit are more powerful than any spirit the witch doctor has, and then we pray with them if they want us to.

The entire time I was giving this speech, my translator kept giggling. I was NOT impressed. When we left, I spoke to him.

Me – “When I am speaking about serious things like that and you are translating, you need to be serious too and just say the words I’m saying!”

Me – “Are you kidding me? That would have been helpful information BEFORE going in there!”

Once again I was mortified beyond belief. I had broken one of every cross-cultural worker’s major rules: Don’t alienate the people. Or insult their lifestyle. I had assumed since he asked for the mission’s help he was most likely attending a church somewhere (which is usually the case.) Even if they aren’t attending a church, they most certainly are not powerful traditional religious witch doctors! Fortunately the witch doctor in question was so desperate that he was not at all offended.

Upon further investigation, we found out that this man had eight wives. Clearly, he had no intention of following the doctor’s orders. He also had three young girls to whom he was “married”, but they were not yet old enough for him to sleep with. In our host culture it is not acceptable to do this, but there is a group of people so entrenched in traditional beliefs and terrified to bring curses upon themselves that they will actually give their daughters as payment to keep the witch doctor happy.

The man eventually passed away as a result of the sepsis and infection that was raging through his body – there was nothing that could be done for him. While we feel bad for his family, those young girls were returned to their families and hopefully have a chance at an education and a future now.

So if you’re praying about becoming a missionary and are thinking through what exactly that will look like, don’t forget to ask yourself, “Am I willing to photograph a witch doctor’s yankee doodle, if that’s what God calls me to?” If the answer is yes, then I think you’re ready to go.

12 thoughts on “The Stories Missionaries Can’t Tell You: Broken.”