This is the fourth fantastic story in a series from my friend The Missionary. To read the whole collection so far, click here.

Shortly after our arrival in the far far far away place we now call home, one of our staff members approached us and asked if he could take an hour off that afternoon. He wanted to go down to the river that our mission base borders, because his church was having a baptism and he wanted to be baptized. Well, no self-respecting missionary is going to say “NO, you cannot go get baptized”, so of course, we let him go. Then he invited us to come along and watch.

Just after we got there, a group of about twenty adults and a bunch of babies and children arrived, singing and dancing as they came. I chose to watch from the river’s edge, on a rock outcrop that allowed me an elevated view of the proceedings. But my hubby, never one to shy away from the action, scrambled across the river with our worker to get to the small pool at the base of the rapids where the baptisms were to take place.

As the church members waded into the water, the guy in charge* started waving his arms around and shaking his fists and contorting his face like the devil himself was trying to escape out of his body – either that or he was realllllly badly constipated.

(* I have no clue what to call this guy.. he was surely not “just” a pastor, often times guys from these churches are referred to as prophets or apostles or some such name that denotes their absolute authority and power and allows them to pretty much say whatever the heck they want.)

To make it more visual for you, he was wearing a long white billowing tunic made from a sheet, with long, wide sleeves that flapped about wildly every time he shook his arms because they were now of course wet and flinging water everywhere and in everyone’s faces.

As my hubby and I watched from our respective vantage points, the singing intensified, and one by one, people came down to the river to be baptized.

Now, for those of you who are churchgoers – whatever variety- you know baptism usually happens in one of two methods; full on dunking (otherwise referred to as immersion), or sprinkling. I’m not here to debate either of those. I am here, however, to tell you that what we witnessed that day more closely resembled a W.W.F. Wrestlemania event mixed with a modern musical on demon possession. 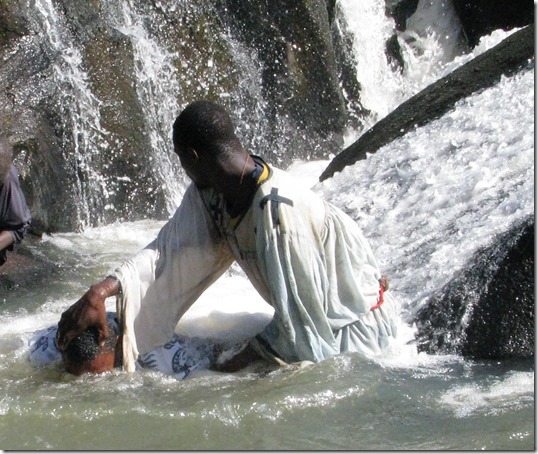 The guy in the white billowy tunic sheet outfit would grab each individual (most of them women) by the back of the head and push their heads forward under the water rapidly and forcefully, shaking and chanting as he did so. Anyone who “fought back” or was somehow not happy to have their head repeatedly slammed under the water – perhaps gasping for air or trying to pull his hand off their head when they started panicking – received more dunkings than the rest. The leader would get almost angry with them as he fought to drown the demons out of them.

He would pause at times to grab at their heads and fling spirits over the rocks and into the farthest edge of the river, cursing them as he did. (I’m assuming that is what he was doing.. he could have been flinging small fish, but I don’t think that would have required the shaking, head flopping, eye-rolling and general appearance of epileptic seizures that he kept demonstrating.) 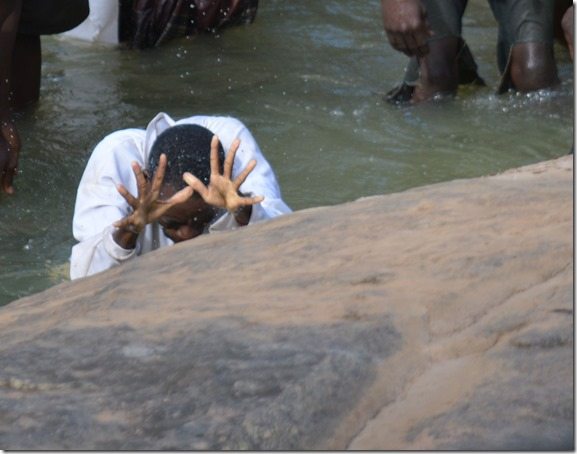 My husband kept looking up at me and mouthing “Should I do something?” as we watched woman after woman forced under the water, gasping for air, clawing for something solid to hold onto. And then, with each woman, as quickly as he had begun, the leader would stop, declare them clean, and they would emerge, singing, dancing, smiling and thrilled to have taken part in the church’s annual Wrestlemania Down at The River.

It was extraordinarily hard to sit there and “respect the culture” when I truly was worried for each woman’s safety, even if they didn’t seem concerned before or after their turns. But we did. We watched and respected.

BUT THEN they started baptizing the babies. 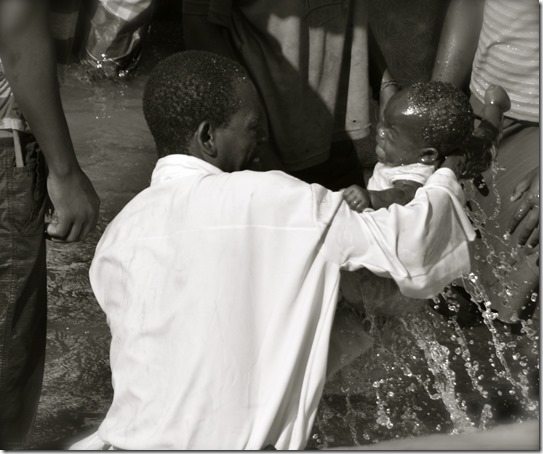 I just about leapt off my rock cliff, into the shallow river below and grabbed those children myself. My hubby and I had an eye conversation because talking was out of the question with the noise of the river and the frantic singing going on below. It was one of those eye conversations, mixed with a few mouthed words and a lot of hand waving. To the best of my recollection it went something along the lines of this.

Husband: “What should I do?”

Me: “If that kid stops moving, I don’t care if it ruins every relationship we have in this community you will not under any circumstances allow that man in a sheet to kill that baby because he thinks it’s got the devil in it. I WILL NOT BE ALLOWING THIS TO HAPPEN ON MY WATCH. I WON’T.”

Husband: “Right but what should I do?”

As each baby was pried from its mothers arms by a crazed looking very wet man, they started to cry. Of course. What kid doesn’t cry under those circumstances? But to this guy, that was an obvious sign of rebellion and resistance (one would assume being brought out by the demons inside.)

The louder or harder the baby cried, the more he dunked them, until they stopped screaming and kicking and instead held on to him as the only solid thing in their little worlds, even though he was the reason for the insanity. He would “grab” the demons and fling them around, often times wrestling them himself and having an all-out screaming fit before throwing the offending spirit off into space and grabbing the next kid.

At the time it scared the bejeebers out of me. I stopped taking pictures because I was worried that I would accidentally take a picture of someone’s death and that just seemed wrong. Now that I have been here a few years, understand the culture a bit better, and know more about this particular church, I am not as frightened of the baptism ritual.

This is the reason we are here. To train pastors to study God’s word and teach them to read all of the scriptures, not a tiny portion. From what we gathered from our worker that day, a few years ago this denomination had a special speaker at their annual conference – a foreigner with little understanding of the culture and the people he was speaking to. He talked about the importance of casting out demons and that demons can be strong. He failed to mention that not every human being is possessed. Our host country’s culture is full of traditional beliefs regarding spirits and ghosts that inhabit and possess people. Many believe that if their ancestor did bad things to a neighbor, that neighbor will haunt the family – attacking, causing sickness, pain, suffering and death – forever. This church decided that they would combine traditional beliefs with what this speaker taught and it evolved into this bizarre display.

Just a few weeks ago we again witnessed this same church baptizing in our little river. We were better prepared for the spectacle this time around, but still – it is breathtaking (and not in a good sort of way) to watch. This time, the church members waved up at us as we sat on our rock to watch, and the leader, seemingly spurred on by the viewing gallery consisting of us and about ten ladies who had been washing their laundry, put on a show of epic proportions. There was shaking, eye-rolling, arm flapping, screaming, hopping, jumping, dunking, and all sorts of flinging of spirits. But at least this time he seemed much calmer with the babies – woot!

2 thoughts on “The Baptism.”