I’m a hoarder by default.

It’s not that I want to be a hoarder – I want more than anything to get rid of tons of stuff in an efficient manner and live a less cluttery life.

Well, more than anything…except for using my time to do anything but that. I always have too much going on to get around to it.

And so, the clutter builds up and builds up until it becomes a health hazard.

Such was the state of our kid’s clothing collection.

At first, I could use the excuse that we might have more offspring. But once we went through with The Vasectomy, that reason became invalid.

Then, the reason was because my sister-in-law and I had thoroughly swapped our collections (I got all her boy stuff and she got all my girl stuff), and it was going to be too much trouble to de-sort. That excuse lasted a delightfully long time. But finally, we forced ourselves to Mom Up and unsort eight years of kid’s clothes.

Then there was the decision of how best to get rid of it all. I began experimenting, very scientifically, to find the best method – combining easiness with decent return. I’ve mentioned my efforts a few times over the past six months, and I promised many of you a full report of my findings.

Besides donating my clothes, which I have done as well, there were two avenues that I actually attempted – I’m sure there are a lot more options out there, but these were the ones that seemed most reasonable to me:

1. ThredUp
2. Kids Market (Local option but you probably have one of these, too.)

Because of the timing of my initial cleanout (Kids Market only occurs twice a year), I started with ThredUp.

In short, ThredUp is a web-based consignment shop. They send you a giant shipping bag (postage pre-paid), and you send it back containing your clothes. They pay you upfront what they decide each item is worth, then they sell it on the website.

I already had a bag I’d ordered two years ago that I’d never actually used (because I don’t make time for this stuff.) Their policies are simple to follow: wash your clothes, put them in the bag, and drop it off at FedEx. They sort, throw out or donate what they don’t want, and then deposit your payment immediately into your PayPal account.

The catch is that they’re VERY particular about brand names, and those preferences sometimes change. They accept Osh Kosh but not Carters – and also not Osh Kosh’s Target brand. They accept Gap but not Old Navy, Gymboree but not Children’s Place.

I found it difficult at first to sort through the brands and figure out what they did and didn’t take, but once I got the ones I frequent memorized, it wasn’t hard. Then I realized that I could sell a lot of my clothes that didn’t fit anymore, and I got more excited. (They accept women’s and kid’s clothes and accessories – no men’s items.)

I sent a bag back holding about 20 items of mine and the kid’s old clothes, and waited excitedly. And waited. Turns out that Alabama is a seriously long way from California when shipped by the most economical shipping (which I can’t complain about since ThredUp covers the shipping.)

Finally, my bag arrived and I waited another week to see my payout. My first bag landed me $43.69. I was pretty thrilled – it wasn’t much per item, but everything I had put in that bag was stuff that neither I nor the children would ever wear again, and I had done virtually no work to prepare it to be sold, so nearly $50 upfront for clutter seemed like a good deal.

I hurriedly sent two more bags in, both of which netted about the same as the first one.

Which is when I started to get blood-thirsty.

Which was my mistake.

I went through my closet more closely, looking for stuff I probably wouldn’t wear again. And I even culled my jeans collection, something I hold very dear to my heart. I even sent them two diaper bags, after checking for their brand names, thinking that this would be the best payout yet.

But of course it was that bag that got a grumpy sorter. One who decided that all of those items that had been difficult for me to part with were worthless – two pairs of designer jeans, two expensive diaper bags, and several other really nice items.

I realized I was more attached to my stuff than I thought when I found out that these items had been thrown out or donated. I considered crying. Instead, I emailed back and forth to plead my case, and finally got escalated to a manager who approved a credit for what I said the items had been worth. It took a while and I learned my lesson: only send stuff to ThredUp that you’re not attached to. Treat it, as I did with my first three bags, as a way to get rid of clutter and make a little extra cash on the side. If you do that, you’ll be happy. If you try to start making money with ThredUp, you’ll likely get disappointed at some point.

Final Report: I sent in 5 bags, each bag containing approximately 20-30 items, and was paid a total of $301.84. Not bad at all for nearly zero work, and I will definitely do it again.

My next experiment was Kids Market. This is a local consignment monstrosity that is highly organized and well-entrenched into the Mommy Circles in which I run. I have multiple friends who volunteer to work 20 hours at this sale – JUST to get the privilege of shopping first.

But apparently if you’re the first shopper you get to buy up all the things from the inexperienced sellers that undervalue their goods. They swear it’s worth it.

As opposed to ThredUp, you set your own prices for Kid’s Market, and you get to keep 2/3 of the selling price – which is a pretty hefty percentage. Unlike ThredUp, you get paid afterwards and only if the items sell. You can choose whether to pick up your leftovers after the sale or donate them. Since the main purpose of this adventure was to de-clutter, I chose the donate option. 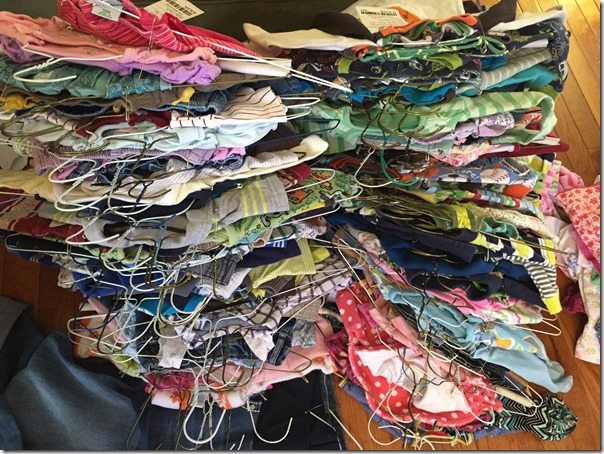 The catch is, it’s a LOT of work. I won’t rehash it since I already blogged about it here, but it involves washing, printing barcodes, pinning, grouping, writing description / color / brand / size for each item, taping, bleeding from all the pinning, and other such sorts of often painful activities. And then when you arrive to drop off your items, you have to sort them all yourself in the giant SuperCenter that is Kid’s Market.

Pro Tip: Take an energetic child with you on delivery day. Do NOT take an impatient toddler. 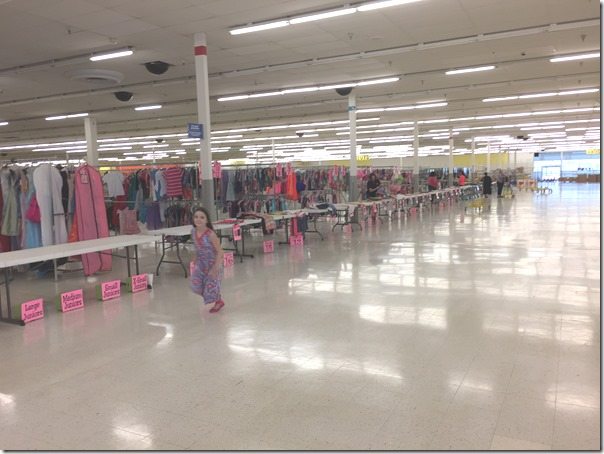 My expert friends gave me pricing advice, bundling advice (they recommended bundling my clothes into outfits and sets as often as possible, even sets such as “four pairs of pajamas”), and hanging advice (do NOT pin all your clothes facing the wrong direction), and in the end I spent about 10-15 hours preparing my clothes for Kid’s Market.

Final Report: I put 167 bundles of items in the sale – I have no idea how many individual items, but it was A LOT. I priced on the high side of the recommendations, thinking that they’d at least sell on the half off days if I priced too high. Of my 167 items, only 87 sold. If everything I’d put in the sale had sold before the half off days, I had the potential earning of $796. My actual earnings were $357.67.

(And yes. I made a spreadsheet. Just for you guys. And for me. Because I live for spreadsheets.)

(The $59 item that sold was a baby swing, in case you’re wondering – unlike ThredUp, Kid’s Market takes all manner of baby equipment, kid’s games, video games, and more.)

As you can see, I should have priced a bunch of $6 items for perhaps $4, and maybe some $5 items for $3. But ultimately, I still cleaned out a massive load of clothes, so that does make me happy.

However, the work involved in preparing all of those clothes to depart from my house was not, in my opinion, worth the output. So I either need to get better at pricing, or just donate, take a chunky tax write-off, and be done with it all.

What are your tips for getting rid of kid’s clothes?

12 thoughts on “The Consignment Report.”