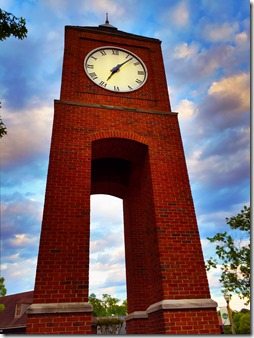 We’ve been inseparable for 33 and a half years. Unequivocally attached to one another, bound by each other’s decisions, moods, and words.

But in one week and one day, that will end permanently.

My tonsils will be cut from my body and thrown away without so much as a proper goodbye. In fact, I’ll sleep through the whole thing – some hostess I am. (Good southern hospitality requires one to always say goodbye – even when their guests have to get up at 4am to leave for an early morning flight.)

But not this time – not for my tonsils.

And so, as we have exactly eight days left to spend in each other’s company, I feel it’s only right that we spend them with an appropriate level of consideration. That we find ways to have quality time together before that time is cut short with a scalpel and a suction and probably a little bit of cauterization.

We should eat ice cream – lots of it. I know that I’ll also be eating copious amounts of ice cream for the ten days after the surgery, but it’s not fair that my tonsils don’t get their own final bowls of ice cream before they’re brutally murdered and discarded in an opaque red “Body Parts” bag.

(I Googled “Will a Tonsillectomy Affect My Voice” right after writing the above sentence. Turns out it actually does, and there’s a “Singer’s Tonsillectomy” that focuses on injuring the pharynx muscles less than a normal old lazy Tonsillectomy. Who knew?)

(I can only hope that I’ll become a better singer from my scarred Pharynx – that I’ll inherit a sexy raspy voice with which I can win American Idol: Senior Citizen’s Edition in a couple of years.)

But let’s continue planning my last days with my tonsils. Because that’s what we’re here for.

We should go see a few sunsets. I’m sure that I open my mouth awkwardly when holding a camera and focusing on the horizon, so my tonsils have definitely grown fond of sunsets over the past few years. Plus, I’m supposedly not going to feel like getting out of bed for a week and a half, so I better stock up to prevent withdrawals.

And I think that they deserve at least three more dates with my husband – both for the food and for the making out.

I mean, they’ve known him for like 50% of my life, and since he’s more likable than me and he doesn’t feed them mashed cauliflower, they’re probably going to miss him more than me anyway.

(I couldn’t let that number go unchecked….turns out, not quite 50%:) 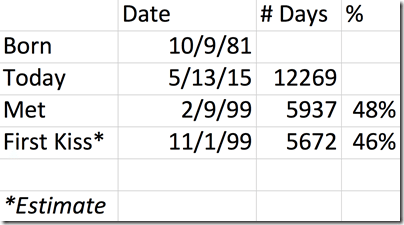 I think that’s enough goodbyes for the Tonsils. Especially since I’m pretty hacked at them. They landed me in the hospital last month, and now they’re being all diva-ish and requiring what my ENT promises to be the worst surgery of my life – despite the fact that I’ve had six others.

(He’s a real comforter, my doctor. “You will need a full ten days to recover. It’s going to be awful. You will wonder why you agreed to do this in the first place and will probably hate me. You will not feel like doing anything, which is good, because if you exert yourself the most common side effect is blood spurting out of your throat. Not dripping – spurting. You will know it if it happens to you. If it does, we’re going to need you to come back to the ER so I can cauterize the incisions. And you don’t want that.”)

So yeah. Good riddance, Tonsils. You’re on your own.

16 thoughts on “An Appropriate Goodbye.”