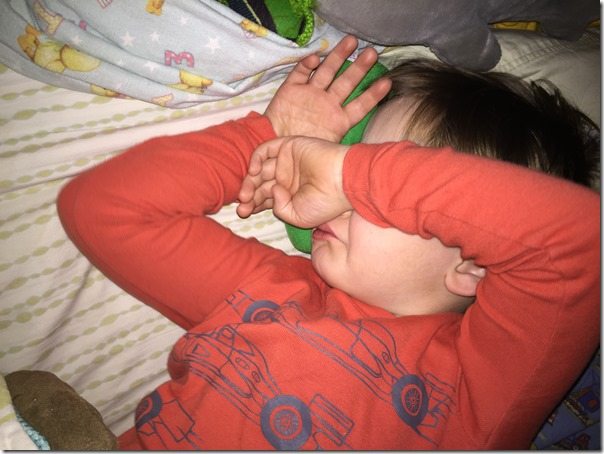 God has blessed me with children who appreciate the fine art of sleeping.

Ali napped until she was five, Noah’s still napping at four, and they both wake up well after the 7 o’clock hour (and have been known to sleep until 9:30.)

As such, it is only right and honorable to homeschool my children.

After all, if God gives you two talents to invest and you bury them in the dirt of waking up at 6am to get to school, how do you think you’re going to justify that when He asks after His investment?

No. I will treasure those talents and sleep late so that I can enjoy life more because of it.

However, Noah has been going to preschool this year. Just three days a week, with a 9 o’clock start time – it seemed like a reasonable burden for those talents to bear. And it was – I only had to wake him up (after 8am) every now and then.

Until the time change. And since that time change, I’ve had to drag my moody little talent out of bed every morning (after 8am), kicking and screaming and clawing at his covers.

As an attempt to document this phase of life and lighten his excessively grumpy demeanor, I took a snippet of video every morning for six days.

Each morning, I asked one simple thing of him: “Okay, Noah. Say ‘I’m not a morning person.’”

But, alas. Noah is four. And he is an extraordinarily opinionated and contrary four – especially first thing in the morning when he’s been unceremoniously awakened approximately 1.35 hours before he wished.

So here were the results, after six days:

I clearly need to get back to properly investing that talent.

9 thoughts on “On The Issue of Being a Morning Person.”