There has never been any news article released that both my readers and friends felt such unanimous urgency to send to me than Crochet Shorts for Men made out of recycled vintage afghans. The tweets, Facebook messages, emails, texts, and IRL “You have GOT to SEE THIS!” lasted for well over a month.

Perhaps it was because of my post about Doilies not being Shorts, and people needed to know – were blankets as shorts a better choice?

I came very close to ordering a pair – just for you guys. After all, if you all love me enough to bombard me with this information so thoroughly, I owed it to you.

But, thankfully for my budget, I have a family member that is just weird enough to buy them for himself. 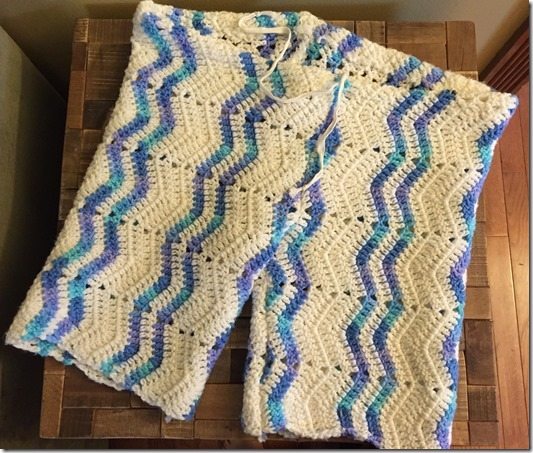 If you’ve been around for long enough, you should also remember that Leo is the self-taught toenail artist who makes fantastically intricate three-dimensional artscapes out of his carefully saved clippings for his cherished wife.

(If you don’t know, you need to click through and then come back.)

But he is also well-known in his hometown for his eclectic fashion statements, and can often be easily picked out of a crowd at the Flora-Bama (I’ve actually had one blog reader do just that – and even introduce herself to him.)

So wearing Crochet Shorts with a tuxedo suit to a Mardi Gras Ball was perhaps the most appropriate use that this New American Fashion Staple had ever experienced. 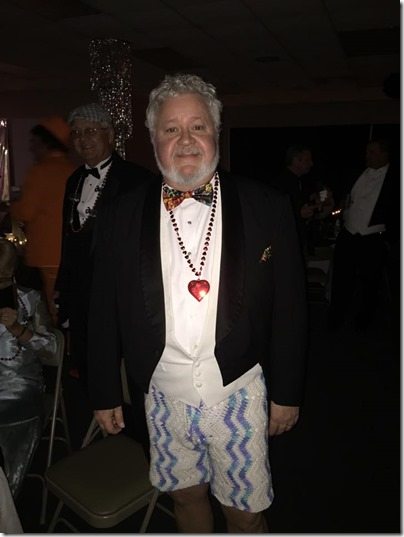 And, after the ball, because he loves me, he shipped the shorts to me.

The pattern is quite generous in its hole size, so before I could put them on, in the name of decency, I had to start with some “Undershorts”.

So the process of modeling Crochet started here: 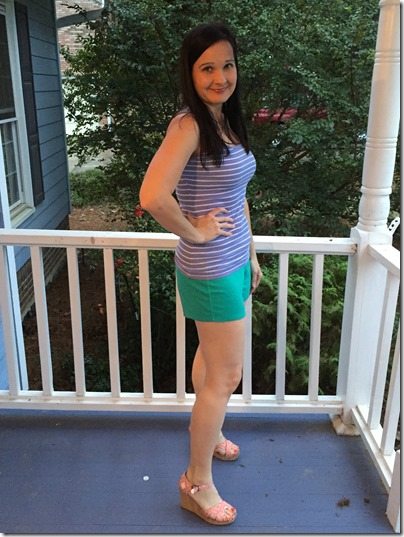 (I’ll have you know that I painted my toenails for the first time post-Winter just for this photo shoot. You’re welcome.)

Then it was time for the shorts.

Now granted, they were made for Leo. And Leo and I are not identical in size.

Which is when the first feature of the Crochet Short, the drawstring, comes in very handy. 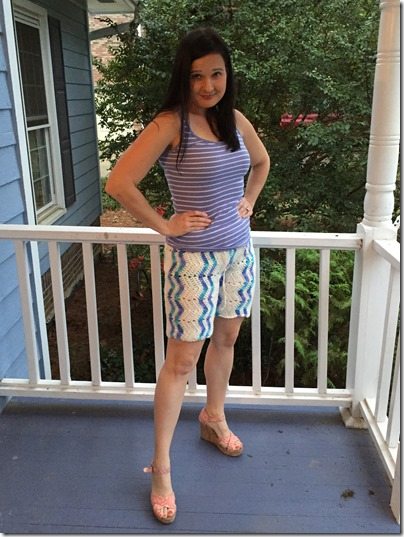 But let’s talk about that drawstring.

Its sharp edges tend to cut straight through layers of epidermis, all while creating a serious crochet bunching issue, especially when cinched, adding to one’s waist a small intertube made of yarn. The effect is…unsettling. 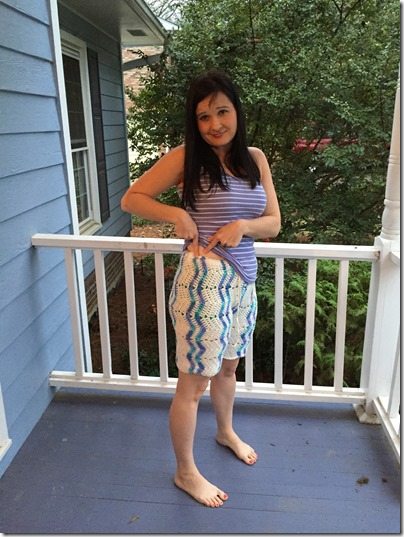 My thoughtful photographer and dearest husband went behind my back and captured an image that shows how very deeply that waistband cut, all while adding extreme inches as it did so. 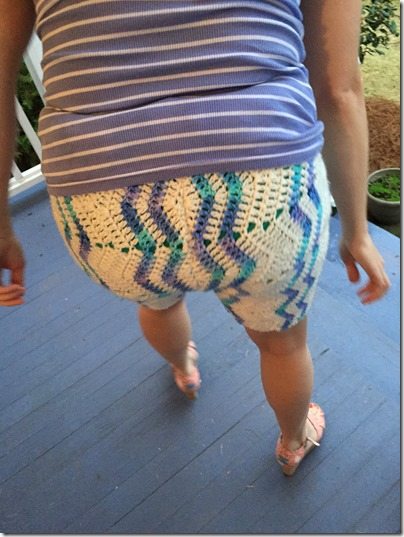 If ever anyone wanted a Kardashian-Sized Kaboose, Crochet Shorts will provide. They are the Fairy Godmother, the Genie in a Bottle, the Avada Kedavra of the small backside. 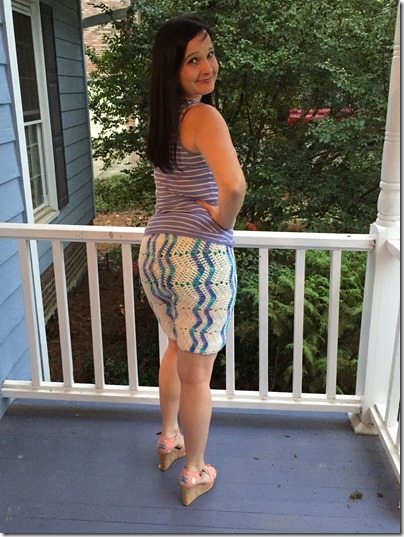 I MEAN. I know that running has grown my butt. But it’s not that size.

To convince myself of that fact after I perused, mouth agape, the photos of my rear view, I had to go put on a pair of blue jeans (after all, that’s the way my butt is the most comfortable being photographed) and drag my cameraman back out to the porch, despite the fact that it was after dark. 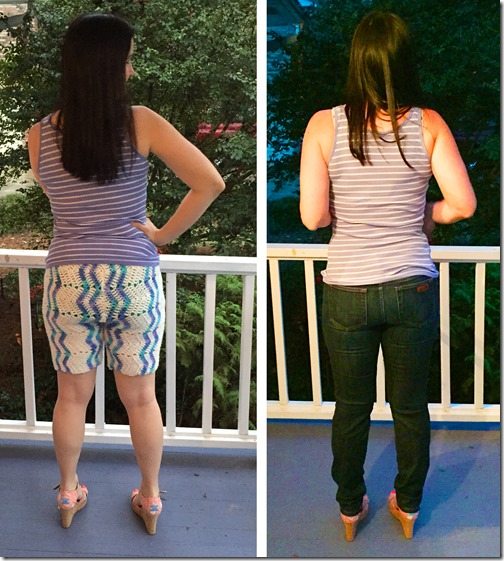 How do those shorts make my whole top half look two sizes bigger, too? They are magical in all the wrong ways. And there is something so intestinally inappropriate about the downward design of that chevron.

Oh – you want to see the front Chevron? Even worse. 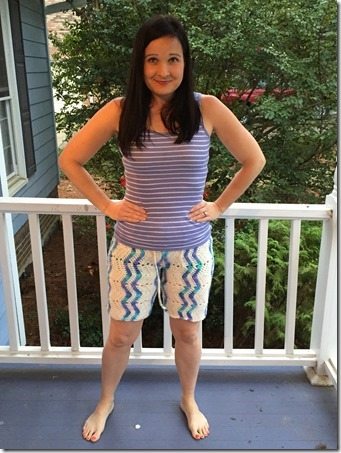 Overall, they just didn’t seem like they were meant for me. 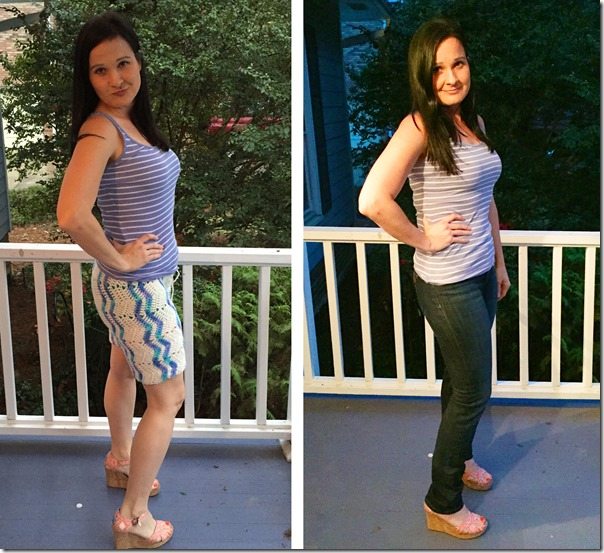 Or, perhaps, I was not meant for them.

So I tried them on a different model. 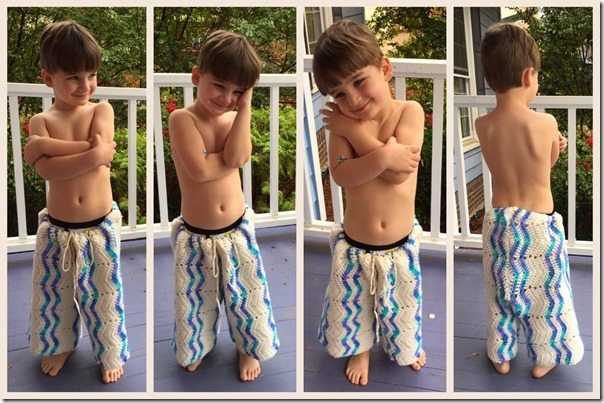 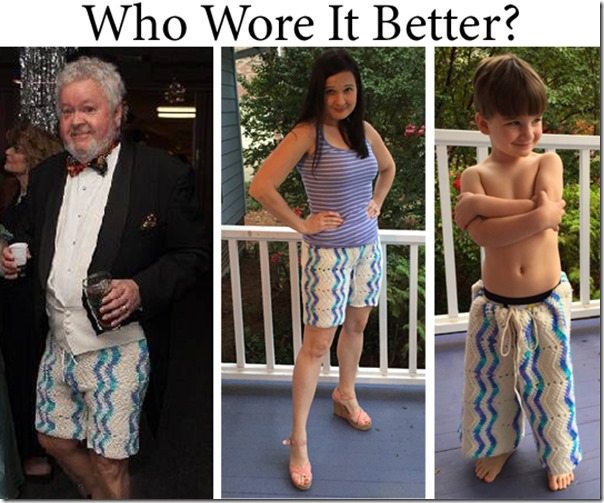 Crochet Shorts are meant for the naturally cute – like Noah and his Great Uncle Leo.

22 thoughts on “Crochet Shorts: The Review.”