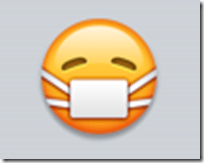 I began noticing the rampant nature of it last week.

Everyone I talked to told me of their illness woes, of their family’s, or of their school’s.

“My kids have been throwing up since last Wednesday.”

“Just so you know, two people who were here yesterday have been confirmed to have the flu, and I’m not feeling so hot, either.”

“Did you hear that 25% of the student body at the Middle School is out with the stomach virus?”

“Just so you know, we have a bit of the sinus crud – nothing major.”

I knew it would happen. And due to the extreme universal nature of it, there would be no clear villain to mentally pin for the deed. The entire WORLD was sick the week before Christmas, which only meant that we would be the lucky family to be sick the week of Christmas*.

Which, incidentally, is exactly how we spent last Christmas. It’s becoming a tradition so steeped that it may have to be added to our official Holiday Family Traditions Directory.

Sure enough, two out of four of us have succumbed. Though my Pharmacist assured me that the rest of the world is indeed still sick and getting sicker, right after telling me that my antibiotic was going to do absolutely terrible things to my stomach and to have a Merry Christmas. And right before telling me all about his own children’s current illnesses and all of the details of their quite messy symptoms.

I sanitized my prescription bottle.

So it’s time for some new traditions, America.

If we want to survive this Holiday Season as a nation, this year is going to have to be different. And not “let’s not have a movie about assassinating a man named Kim” different.

We must reorganize ourselves for our own good.

Forget family gatherings – we must rewrite familial lines according to related illnesses.

I need to send Noah off to whoever’s going to host the He-Threw-Up-Once-But-Didn’t-Have-Any-Other-Symptoms(-Aside-From-His-Typical-Grouchy-Demeanor) Illness Family.

Ali and Chris will definitely need seats at the table with the We’re-Not-Sick-But-Our-Family-Is-So-We’re-Prolly-Gonna-Infect-Somebody-Or-Something-Anyway Illness Family.

My Pharmacist’s kids apparently need the We’re-Deathly-Sick-But-Our-Pharmacist-Dad-Shrugs-His-Shoulders-When-Asked-What-We-Have family (hopefully that’s a small gathering), and there’s going to be a record-breaking crowd at the We-Have-The-Flu-Even-Though-We-Got-The-Completely-Useless-2014-Flu-Shot Illness Family.

So. Organize appropriately. Spread your diseases responsibly. Lemme know what families you need to locate and where I can send Noah. And tell your real family that you’ll see them at Easter.

* Disclaimer to my actual family: We will all be in the clear by Christmas Day, unless we pick up some other delicious morsel of malaise. So don’t go mentally pinning all your future illnesses on us.

7 thoughts on “The Urgent Reorganization of Christmas.”