Ten years ago, parents used to worry that their kids would embarrass them in the middle of their Christmas plays. Or kindergarten graduation. Or gymnastics meets.

They’re likely to pick their nose and rub their boogers on the child next to them, or perhaps pull their dress up over their head in the middle of Joy to the World, or maybe they’re that kid that sings SO loud and SO off-key that everyone else is giggling and pointing.

That was ten years ago.

Today, kids are much more worried about their parents embarrassing them.

Because 2014 parents are the worst.

Now we come outfitted with our iPhones and our iPads and our GoPros and our DSLRs and we’re trying to use them all simultaneously because we need video AND quality photos AND photos that we can immediately post to social media while still juggling all four devices. You know, to show that we’re engaged with our kid’s lives.

Noah had his preschool Christmas program a few days ago. I was puzzled when I arrived a few minutes early and found that we would have to sit near the back of the sanctuary, then wondered at exactly what time these other parents had staked out their spot.

Each, of course, needing an extra seat on the bench for all of their electronic equipment. The room was buzzing with brain cancer waiting to happen.

The director came up and made a few announcements, explaining where to go after to program, and then stating The One Rule.

“Remember – if you step out in the aisle to take photos, please go right back to your seat, as we want to keep the aisles clear.”

Whaaaaaat? Parents are going to paparazzi the children? No…..

I had possessed the forethought to sit on the edge of the pew so that I had an aisle view. I thought this was going to be to my advantage.

Here was my actual view of the Christmas Program. 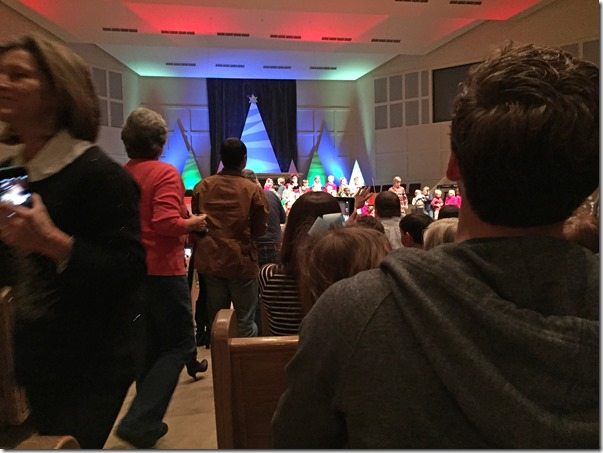 As it began, the traffic jam was so intense that I was worried fights would break out over the best aisle spots. Then people gradually settled in with their iPad videography and various forms of photography, all assuming a graduated stance, one above the other, solidly staying put in the aisle. 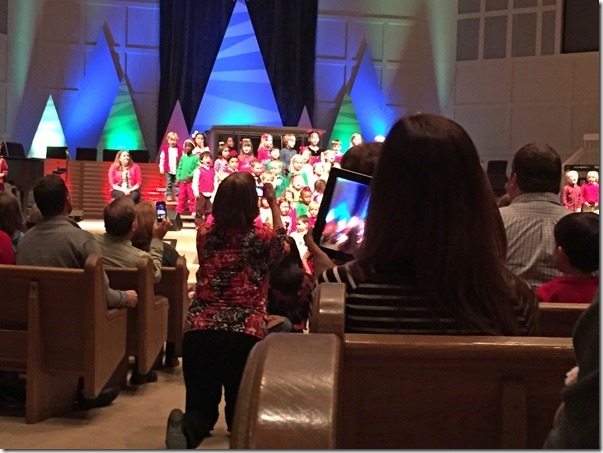 But I couldn’t. It just felt too awkward – too exposed. And after all, they had asked that the aisles stay clear.

Apparently the other parents had heard “Let’s keep the pews clear” instead.

And so, I sat in my seat, and I quickly changed camera lenses. From my standard choice to my Veronica Mars Stalker Telephoto lens. Because that was the only way I was going to be able to snake through this crowd and see my kid.

Every now and then, there would a small window where I could nearly focus my zoom lens on him – but always with a head or device in the way. 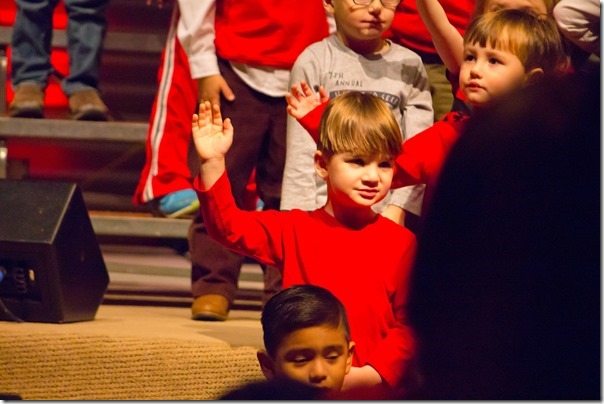 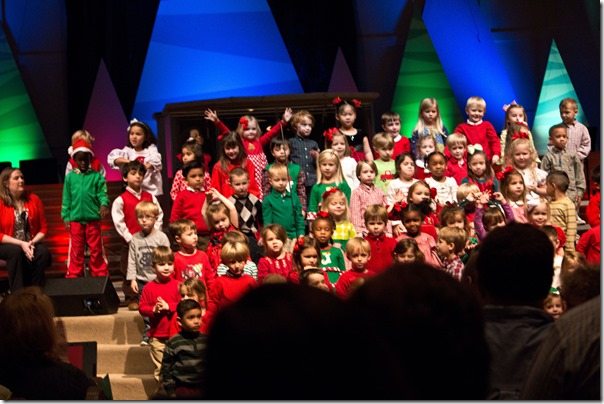 Noah felt my angst, knowing his A-List performance had no chance of being recorded. 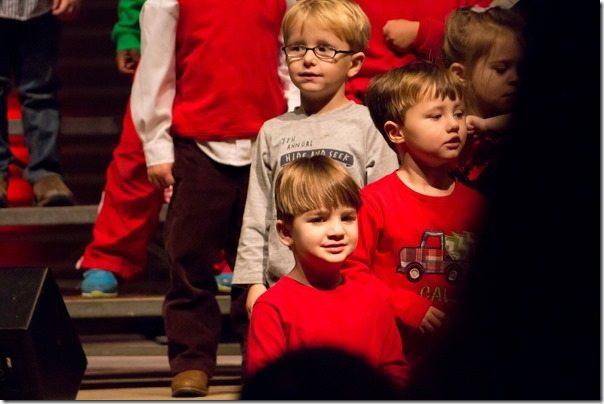 And superstar it was – watching his Music Director closely to see what he was supposed to do next, completely ignoring me and my mega camera lens. 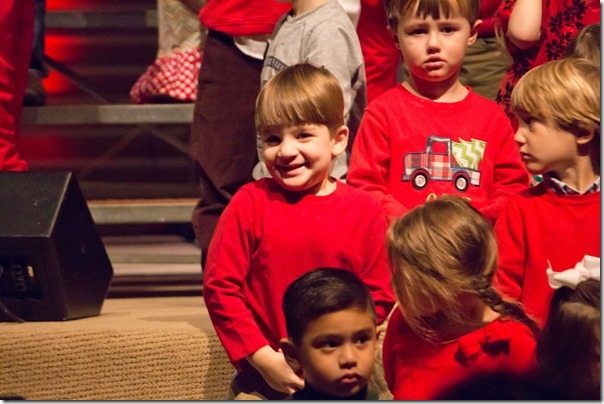 Just like the classmates around him, he was fully immersed into this Christmas Program. 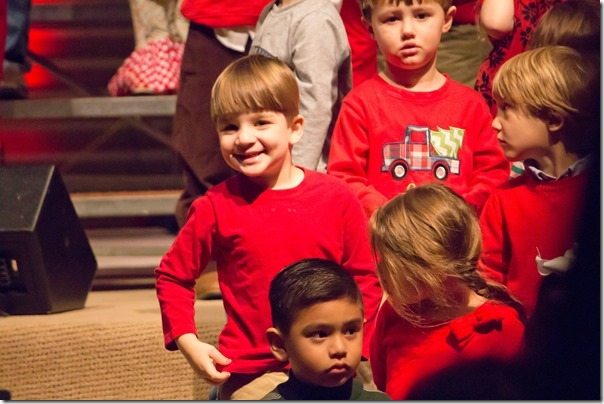 He was intensely focused on looking joyous, 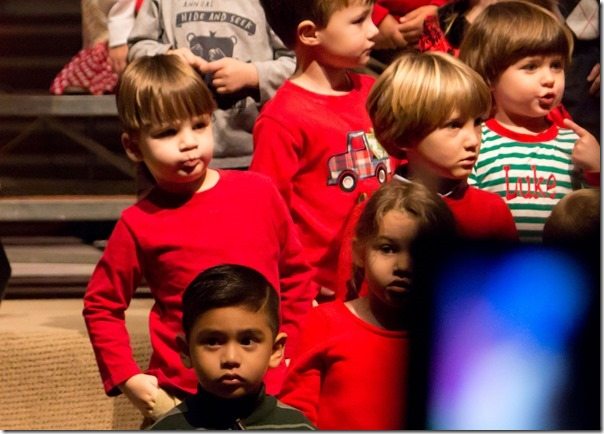 On participating in all of the hand motions, 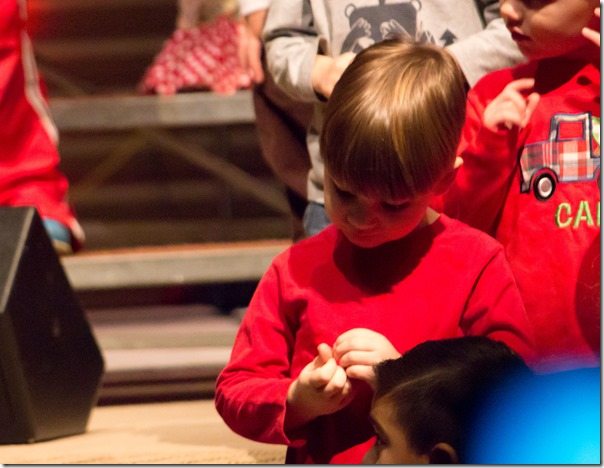 And never being distracted by his adoring fans, 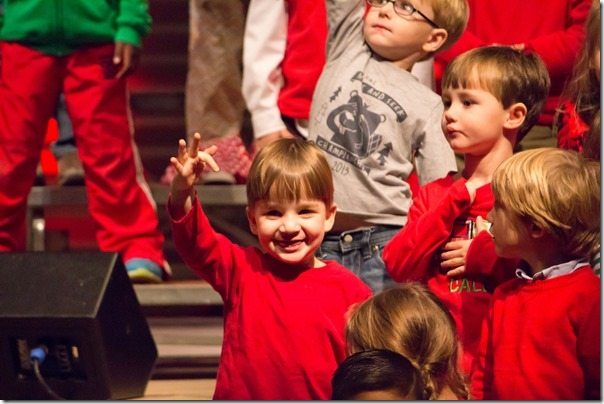 …and all of their devices.

Because 2014 Parents are the Worst.