So the sunset betrayed me last week.

The downtown area is in a basin. So if you can get above it in any way, it’s MAGNIFICENT. Besides the mountain ranges on the south and east sides, there are parking decks. I’ve investigated several of them, but had heard of another – at a different angle – that was supposed to be sublime.

The inventor of the fantastic group InstagramBham, Blaine, was the one who first mentioned this deck during a news interview. I tried to find it…but I couldn’t. I tried again…and failed. I finally asked him for specifics…and I found it.

Clearly built in the 70’s, it looked more than a little creepy, as parking decks go. On the side I approached first, it said “NOT OPEN TO PUBLIC” and “VETERAN’S AFFAIRS PARKING DECK.”

I drove around to the corner and it told a different story.

Okay this was good. Because I had no cash. I rarely use the stuff anyway, but I had quite inexplicably used every last dollar in my possession that day.

(But I was fairly certain that just in case, I had a bit of stray money amidst the moon dust in the bottom of my purse.)

I was alone on the top, which made me partially relieved and partially nervous. What if someone else came up here? What if they weren’t a good person? Parking decks aren’t places that ladies should hang out alone…

I clutched my phone and my camera and my car keys and did a 360 look around the deck every 45 seconds. I’m not usually such a wuss but I was in a different part of downtown than I was used to, and the buildings did look a bit creepy that night. 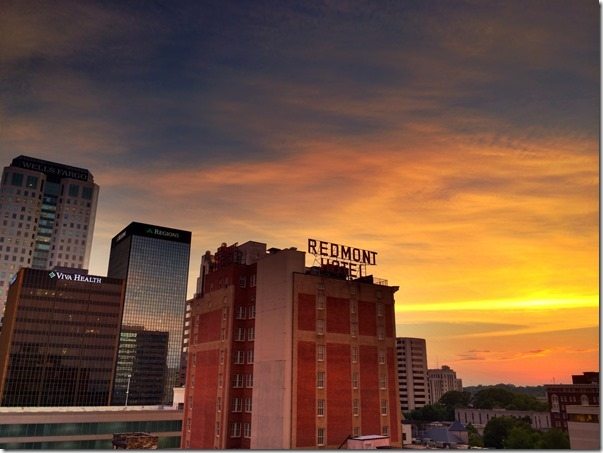 In a good way.

I relished the sunset. 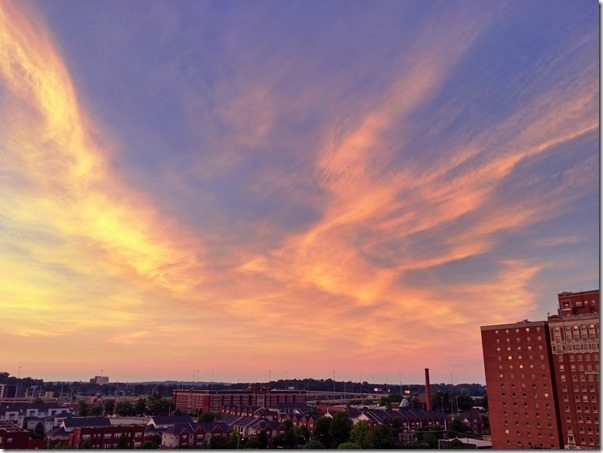 Every angle was amazing, 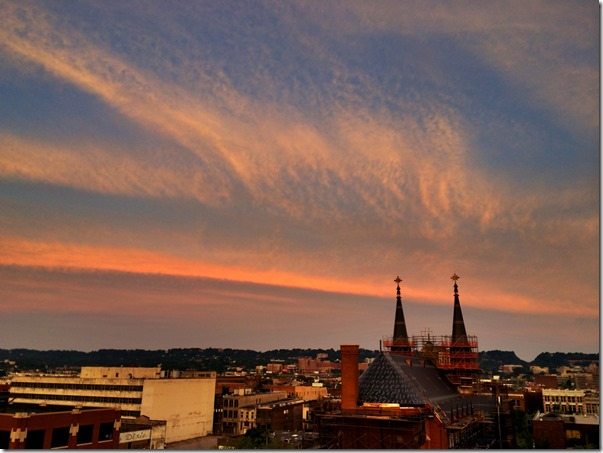 Every cloud was perfectly placed. 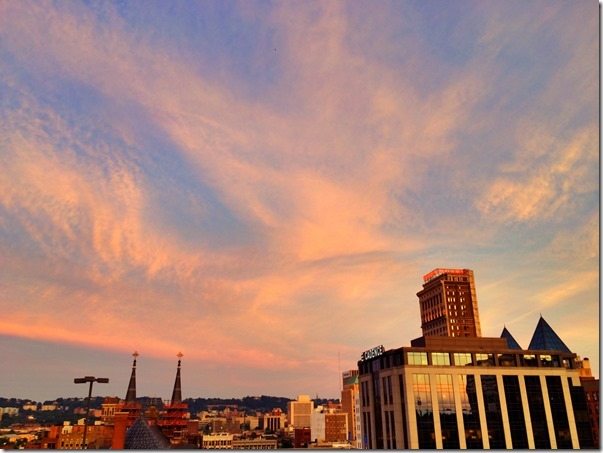 I couldn’t have picked a better night to visit a new place, and I was thrilled to add this parking deck to my repertoire. 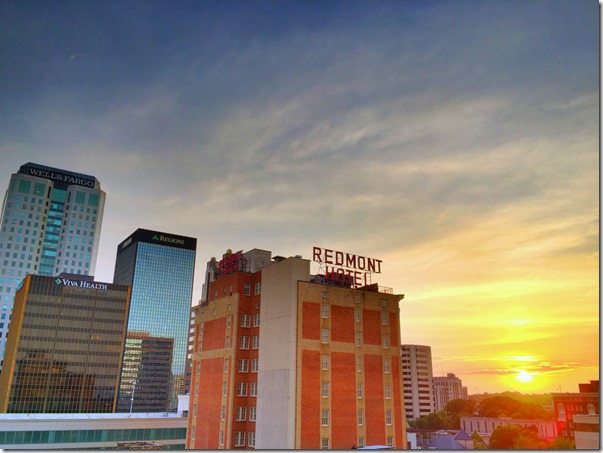 Once the last pink cloud faded away, I hopped in the car and began my descent. The parking lot grew seven more layers from the time I entered.

…And then I realized that you had to do this weird every other corkscrew thing to get out – long, short, long short – so I might have just gone in seven extra circles.

Finally, I got to the gates.

No problem. I had my ticket. I had been there less than an hour. It was a free sunset.

I pulled up to the meter – the one that I assumed would eat my ticket – and there was a sign.

Gone was the long and fancy rate sheet from when I entered. Two dollars to get out, and two dollars was the only way you’re getting out.

It’s okay. Surely I can scrounge up two dollars. SURELY.

I pulled out my industrial strength mining sifter and began going through the contents of the bottom of my purse.

Soft Mint from the Mexican Restaurant…

But there was no cash.

I pulled out my wallet. Maybe I stowed away some cash in a hidden compartment. Maybe I had enough change. Surely there was some way I could get myself out of this parking deck before the Ghosts of Veterans began floating about.

I had a few dimes, a nickel, one quarter, and three pennies.

The night turned on me and became spontaneously dark. Silent and dark. The feeling of being trapped crept up the back of my neck and I pondered how typical it was for someone to simply crash their car through the gate.

I emptied my wallet. A couple coupons, all-too-useful credit cards, and my checkbook.

And I was in an abandoned parking deck at 8:15pm in nearly-North-Birmingham.

I heard a sound approaching from the left.

(Which he probably is in real life. All movie stars are. Stupid cameras and their stupid pounds.)

Officer Freeman stared at me. And said nothing.

As I desperately dug, I explained my predicament without the use of commas.

“The deck said it was free for under and hour and I used my last few dollars to get my husband into the pool this afternoon and I can’t find any money except for this change and OH the machine only takes quarters so it’s useless to me anyway and I have no idea how I am going to get out of this deck.”

I didn’t mention that my crashing-through-the-gate strategy wouldn’t work any longer since he showed up.

He finally spoke, in a measured, soft tone. “It’s two dollars after the cashier goes home. And she leaves at seven.”

This would have been useful information to have included on the sign at the entrance. But whatev.

“But the rate sheet…I wasn’t prepared…it didn’t say anything about after hours charges!”

He continued to stand over me, silently. Just like Morgan Freeman would, as he wisely let me learn to solve the problems of the universe for myself.

I started scratching off the inner layer of my purse, hoping that purses eat change like dryers eat socks. I looked more and more like a cat trapped in a garbage can.

I had dropped a dime. I opened my car door, desperately pawing around for it. But it fell into some sort of crack in the universe and was surely in Narnia by now, most likely growing into a dime tree.

Feeling even worse, I began to empty out all of my car compartments to prove to the security guard that I had nothing else.

He slowly stuck his hand in his pocket, as if he had the magic key to let me out.

I found three more pennies and added it to my handful.

He fiddled with something in his pocket, seemingly still waiting for me to ‘fess up that I actually had plenty of money.

I reached my hands into the inner folds of my car’s private places and drew them back empty.

He silently pulled out a shiny token and put it in the meter. My shackling gate lifted.

I poured my grimy, sticky, triple-coated change into his hand, thanked him profusely, and sped out of the deck – before that Evil Bar went back down.

And I promised myself – and the Skinny Mr. Freeman half a mile behind me – that I would never sunset chase without cash. Ever again. 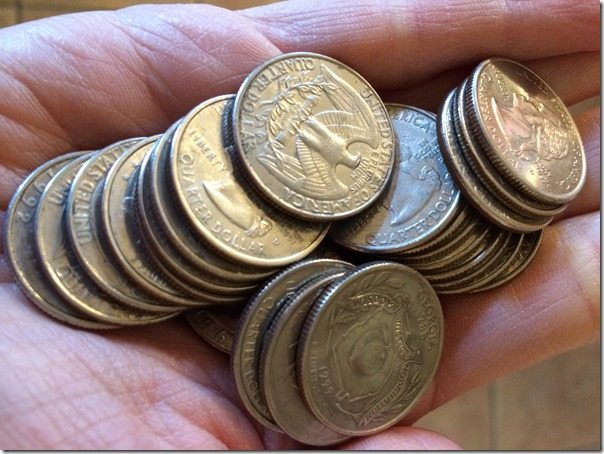 14 thoughts on “The Perils of Sunset Chasing.”