Pinterest has all of these freakin’ crazy ideas about food substitutions that will make you look just like the well-toned scantily-clad ab-crunching extremely photoshopped girls that are unfortunately plastered on way too many pins.

“Baked Zucchini sticks that are better than French fries!”

“Whipped Eggplant that you will swear is butter!”

“Tofu Smoothies that will make you think you’re drinking a fruity drink with an umbrella poolside in Aruba while weighing 95 pounds and in a string bikini next to your husband who looks like he just jumped off the GQ magazine! And wait – you two are going for a ride on dolphins immediately after finishing your Tofu Delight, and you still have two weeks of this vacation left and a million dollars of spending money!”

I often find Pinterest to be delusional to the point of needing a straight jacket, if they made one for websites.

But one dish that I will vouch for – with a few caveats – is Mashed Cauliflower. 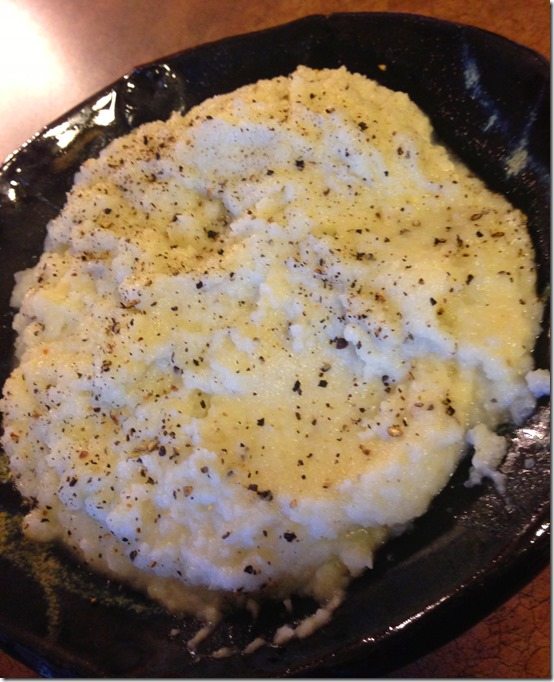 It really is [nearly] as good as mashed potatoes.

There are some very important rules that must be adhered to if you truly want this dish to make you smile rather than gag.

Rule Number One. When boiling the cauliflower, it will smell like an eighth grade boy’s gym bag after being trapped in his locker for an entire semester. If you don’t want to have your stomach turned before you even eat it, you must start boiling the cauliflower and think happy thoughts with a rose jammed up your nose. Or drive ten miles away.

The smell is so strong, in fact, that…

Chris was showering during my dinner prep the last time I made this dish. He was toweling off and caught a whiff. “Is my towel mildewed?” … he sat there for a minute and then caught another whiff. “I swear I just got this towel out of the closet! How can it have turned already??” … a few seconds later he caught a third whiff. “Oh I know what is going on! I bet Rachel’s boiling cauliflower downstairs.”

In its native form, the steam rising off of this vegetable could be used as a weapon in The Hunger Games. 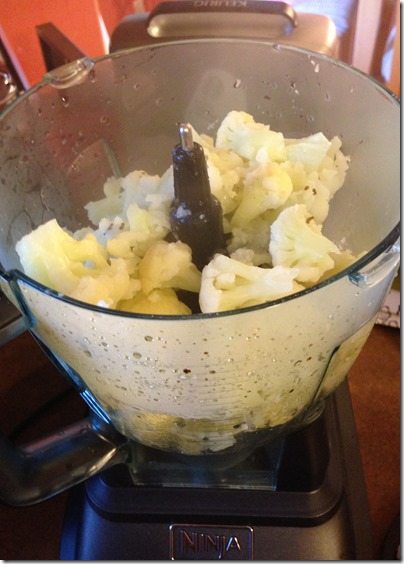 Rule Number Two. You must beat the smell back within an inch of its life by stripping the vegetable of its nutritional purity through the process of pelting it with butter, sour cream, and generous amounts of sea salt and freshly cracked pepper. 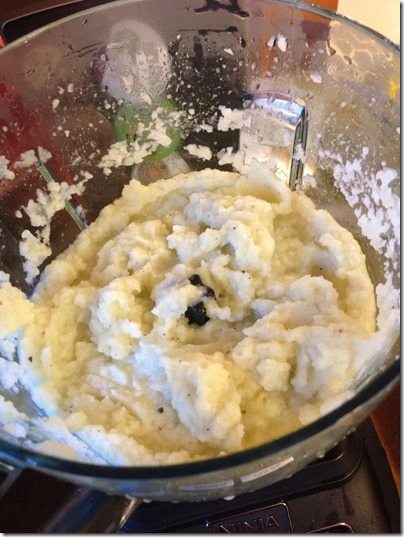 Because we all know that even whipped sewer water can taste good if properly buttered.

Rule Number Three. This dish must be eaten piping hot. The longer the mashed cauliflower has to sit, the more of its natural musk molecules defeat the Butter Overlords and take back control. So do not plate this dish until you have your spoon in your hand and blessings are prayed.

Rule Number Four. DO NOT, under any circumstances, allow your children to see that this dish was made with cauliflower or that it is associated in any way with the rotting garbage odors that they smelled a few minutes ago. THIS DISH IS TO BE CALLED MASHED POTATOES, nothing more, nothing less. If they’re not familiar with such, then tell them “It’s like the insides of French Fries!”, and that may be just the key you need.

Rule Number Five. Your children still may cry twice and gag three times upon the tasting of this meal. This is no reflection on your ability to turn a putrid-smelling vegetable into a southern tradition. This is only due to the fact that you’ve allowed your children to eat far too many boxed pancakes, chicken and fries, and Lunchables.

(On second thought, Rule Number Five may only apply to me. I’m sure the rest of you have your children trained to eat Spinach and Beet Soufflé three nights a week.)

(My children, on the other hand, find me unqualified to boil water. My three-year-old told me on Saturday, “Don’t forget to spray the pan when you make cinnamon rolls. Remember that time you almost forgot and I had to tell you? That was SO. FUNNY.”)

(I bet The Pioneer Woman never gets such cheekiness when she makes cinnamon rolls.)

Rule Number Six. The odor returns in a different form about an hour after this dish is consumed. Don’t eat this side if you plan on having the Queen of England over for dessert.

Rule Number Seven. If you have leftovers and plan on reheating this dish, simply unplug your microwave, take it to the farthest point of your driveway, run an extension cord, replug your microwave, and proceed to reheat your Mashed Cauliflower. You’ll lose neighbors over it, but at least you won’t singe the entire family’s nose hairs and foul the carpets.

I’m certain that you’re asking yourself by now, “is this a recipe post?” and the answer is that I’m not sure. But if, after all this, you still want to attempt Mashed Cauliflower (which I find absolutely delicious and just as good as mashed potatoes as long as the above seven steps are executed correctly,) here’s what I do:

1. Cut up one head of Cauliflower into large chunks. Cover in water, douse with large amounts of sea salt, and boil until soft – about 10 minutes.

2. Drain, put into food processor with 4 tbsp of Butter, about 1/3 c. of sour cream, and extreme amounts of sea salt and freshly cracked black pepper. Blend until your kid’s ears bleed from the noise.

3. Keep sealed in the blender until you lop it onto your kid’s plates.

What Pinterest Food Hacks have you found that are actually edible?