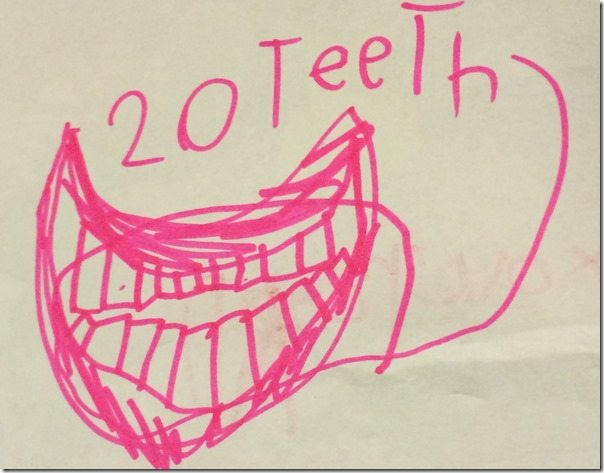 Upon the loss of one’s eldest child’s first tooth, parental discussion has to take place.

Are we going to do the Tooth Fairy thing?

How far does our willingness to “Fairy It Up” go?

How much does the Tooth Fairy pay for teeth these days?

We agreed that yes, we would do the Tooth Fairy, but most likely half-heartedly, much like we do Santa.

And plus – Ali was always quick to tell us, “Silly. Fairies aren’t REAL. Everyone knows that!”

But then one of our babysitters told Ali that fairies were totally real and she’d even seen one, giving Ali the boost she needed to believe.

So then Ali somewhat cornered us further into Fairying It Up by always writing a note to the Tooth Fairy – and I couldn’t help but respond.

(So really, everything is the babysitter’s fault.)

(Or at least I will frame it that way when Ali finds out the truth and has to work her way through the Five Stages of Feeling Deceived. Or Ninety-Five, when you’re as black and white as Ali. I think we’ll hire a babysitter that night.)

As for the last question, Chris and I discussed the price of our own teeth in the 80’s, reviewed inflation graphs, and ran an amortization schedule to come up with the highly scientific price tag of $5 a tooth.

After all – each kid only has 20 teeth. So that’s a $100 investment in the loss of their entire mouth, spread out over a couple of years. And we only have two kids, so how bad could it be?

We did not, however, take into account the difficulties of staying stocked in $5 bills if Ali ever went on a toothing spree. Note the dates on my Tooth Fairy Letters. 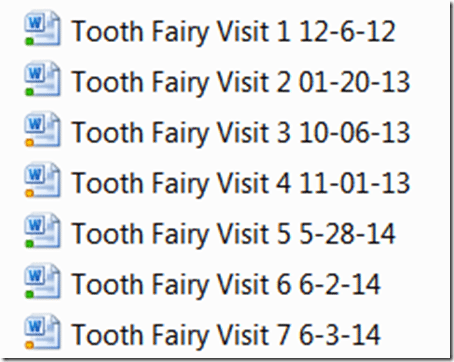 That’s right. After a six month hiatus following The Fangs From Hell, she has lost three teeth in less than a week – and a fourth is quite loose.

Her mouth is beginning to look like a nearly-finished Jenga Game and the news about the Federal Reserve’s shortage of $5 bills is totally her fault.

But something happened during that six-month break: a flash of skepticism.

After the first loss of Tooth Week, she wrote her note while in my company before bedtime. When Chris went to tuck her in, she had added a penciled addendum: 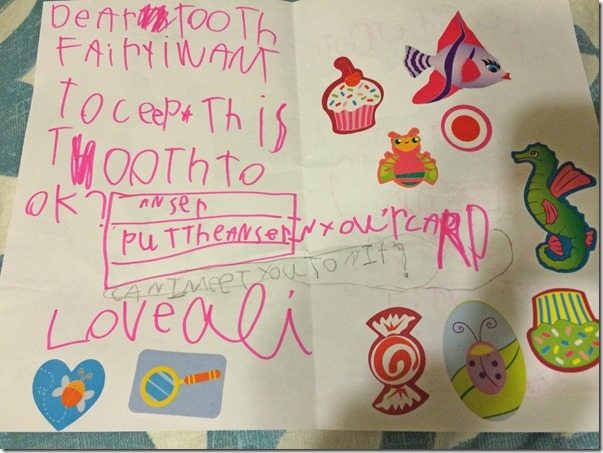 Chris offhandedly told me about the addition, so I addressed it in my note back. 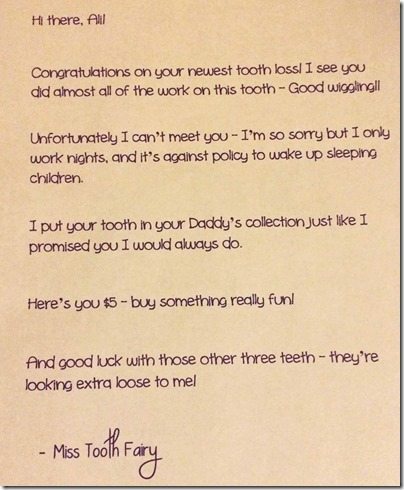 She fell asleep with her note firmly under her arm, so I had to pry it out with the precision of a neurosurgeon to swap it for mine without waking her and ruining my life.

The next morning, Ali ran into my room and said, “I even added that last part onto the note without telling you! …just to see.”

She’s gonna hate me so hard when she does find out. What have I done. I better line up that babysitter.

Five days later I pulled the next tooth. Two teeth now, on the first yank, no tears. I was elated, as was she. 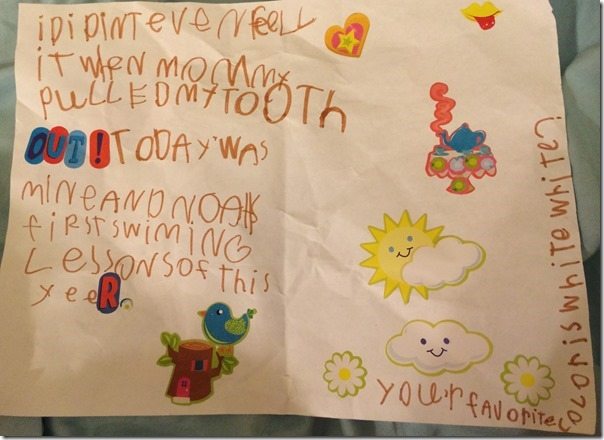 Chris and I debated whether the Tooth Fairy’s favorite color should indeed be white (Ali also assumes my Grandmother’s favorite color is white based solely on the fact that her hair is.) Ultimately, Chris left it up to me. 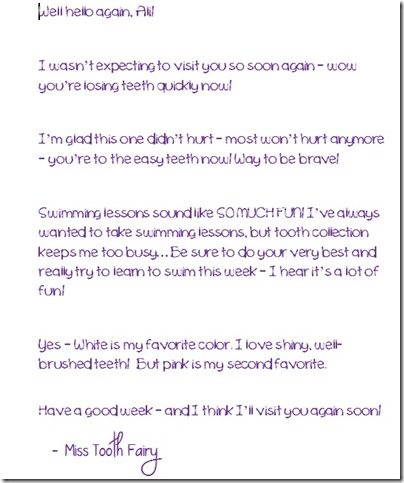 As I headed into her room for what would probably be another note-prying, I said to Chris,

“Wait a minute. How is tooth-fairying all my deal? Why don’t you ever have to retrieve a tooth? Or pull them, for that matter?”

“We have a good system.”

“You mean that I do all the work?”

“Well, you started the note thing. I would never do that. So it’s on you.”

“Whaddya mean?? You don’t approve of my notes? She loves it!”

“I could never keep up with that kind of continuity. As I said, we have a good system.”

I pondered, remembering that this was pretty much the only familial duty that he’s not constantly offering to do for me or just doing it for me without asking. We do indeed have a good system.

The very next night, the third tooth was begging to be pulled. 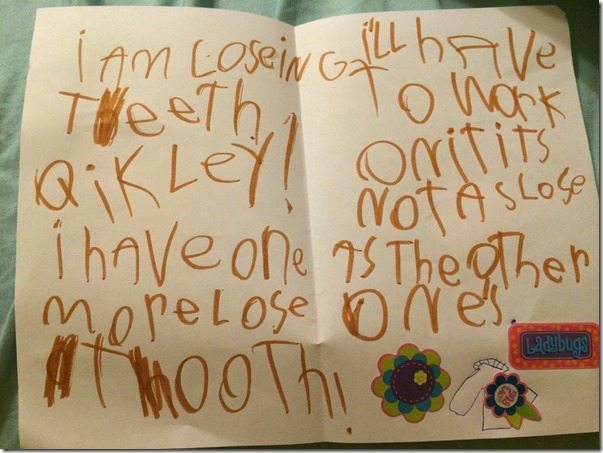 And this time, although her note was retrievable, Ali had the tooth in a Ziploc bag firmly in her fist under her pillow.

I left my note and her money, but also left the tooth bag. 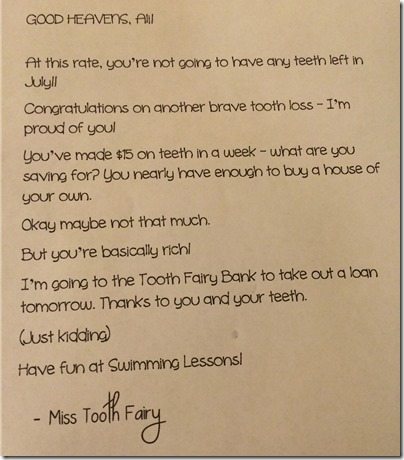 Chris was worried. “You – I mean the Tooth Fairy – told her that you would always put the teeth in my body part box. This may be it for you – it may all blow up in your face tomorrow.”

Out of guilt, I went back and attempted another retrieval. But it wasn’t happening. She was making a fist pearl out of that baggied tooth.

“You should leave another letter then. Explaining why you left it.”

The next morning, Ali came in with the Tooth Fairy note and the tooth.

“Look what I found under my pillow! Why would she have left the note? She PROMISED to ALWAYS put them in Daddy’s collection!”

“But she PROMISED!! And no one should EVER break their promises.”

Yup. It’s time to have the babysitter over to clear things up.

16 thoughts on “Three Teeth and a Babysitter.”