For those of you who were around last year, you will remember that Ali got fired from Private Swim Lessons. And rightfully so – she doggedly persevered in her 6.5 year rebellion against allowing water to come into contact with her face.

The child doesn’t have a strong-willed cell in her brain – except when it comes to fear. And the convergence of h2o:face is the epitome of all fearful events.

At seven and a half, I foolishly hoped that things in her head would have magically fixed themselves over the winter. But as soon as the pool began coming up in conversation, she was quick to remind me that she had no interest in putting her face in the water, and therefore, there was really no need for me to make her take swimming lessons again.

But the kid is SEVEN AND A HALF. She’s as tall as a nine year old, and she’s starting to look seriously absurd in her Puddle Jumper – the same one she’s been wearing since she was one. 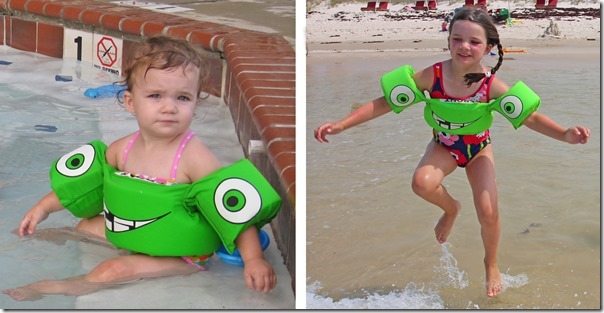 Even Toddler Ali is judging her.

So I decided that yes indeed, we were going to do swimming lessons again, and no indeed, I didn’t think it would work.

I would use her brother against her.

I signed them both up for lessons this year, once again with The Beloved Mr. Ray, and they would be receiving their lessons together, so that I could fully use Ali’s Elder-Sister-Complex to my advantage.

Thereafter, every time Ali began to bemoan the impending lessons and the inevitable facial-liquid contact, I would remind her in a grave, dramatic, and super-important voice, “Your brother is listening to you, honey. And if you’re afraid, he will be afraid. You must be brave – for his sake.”

It would shut her up every time, but she still wasn’t exactly looking forward to the process.

Nor was I, for that matter – not just because of her, but because of the flashbacks I was sure to have from last year – from Noah’s pootastrophe.

Thankfully, he’s potty-trained and past those Dark Days. But still. My Parenting PTSD is deep with that one. 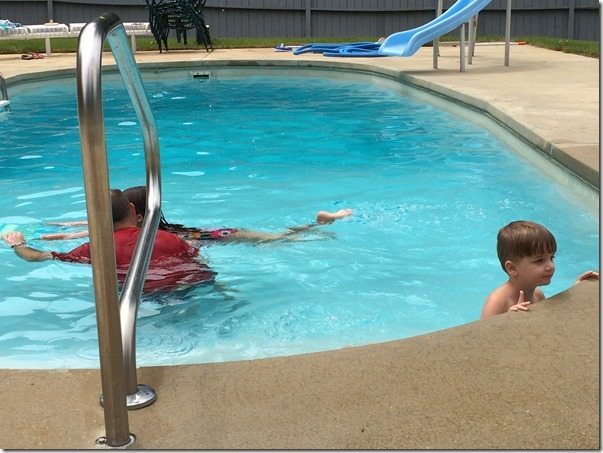 We showed up at the pool and began lessons. Ali was unsure but quiet. I was quick to remind her how very, very important her role was – she was her brother’s biggest influencer, and she didn’t want him to be scared for years upon years like she was/is – riiiiight??

It worked. She didn’t notice that Noah wasn’t paying any attention to her (but instead was whimpering over and over about how much he needed to poop and giving me The Tremors), and by the end of the day, she was willing to attempt it. 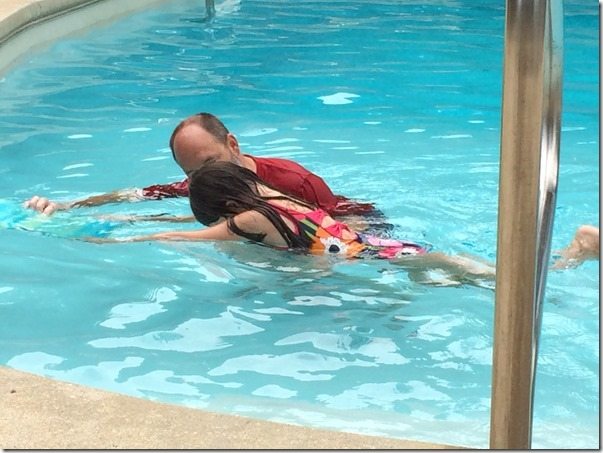 It was equivalent to a moon landing for our family.

Although Ali had successfully faced off with the water the day before, she had told me (privately, out of ear shot of her impressionable brother) that she had no desire to repeat her successes, and would really like to no longer attend swim lessons.

But that wasn’t an option, because her brother needed to learn. 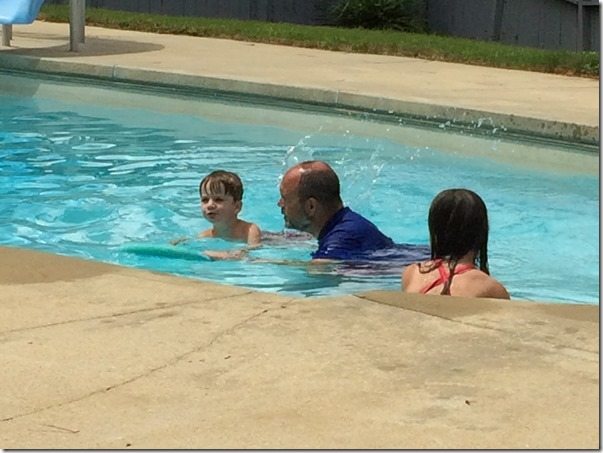 Once in the pool, she again felt the full burden of my manipulation. 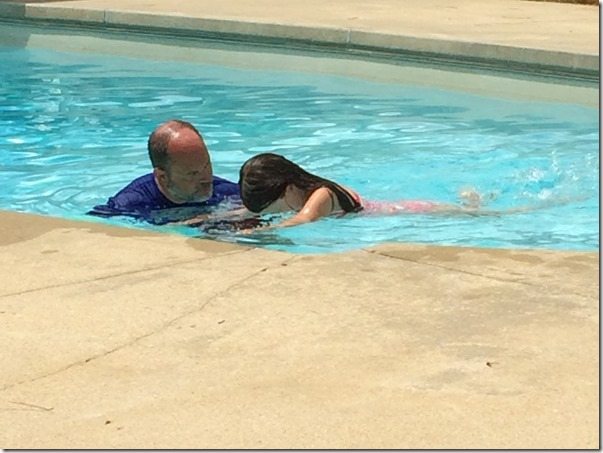 And, miraculously enough, swam. For the first time in her seven and a half years. 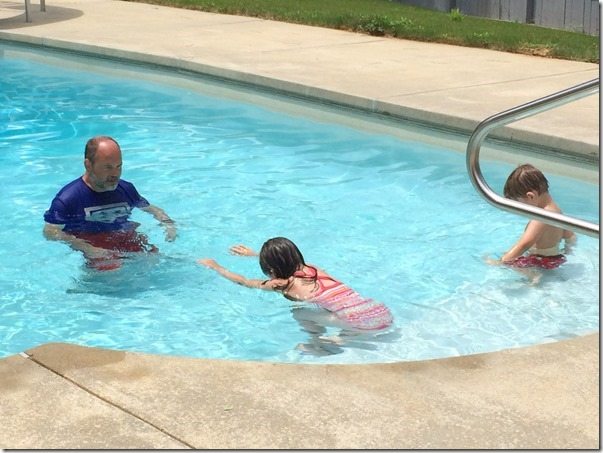 There was something empowering about that first swim. Something that grabbed ahold of her subconscious with a power greater than her fear. And with Mister Ray’s magical teaching abilities (something to which she didn’t offer a fighting chance last year), she was sold out.

She. Was a Swimmer. And our family had metaphorically taken a trip to Jupiter, thanks much to her completely disinterested little brother and my shameless use of him as a pawn in my parenting chess game. 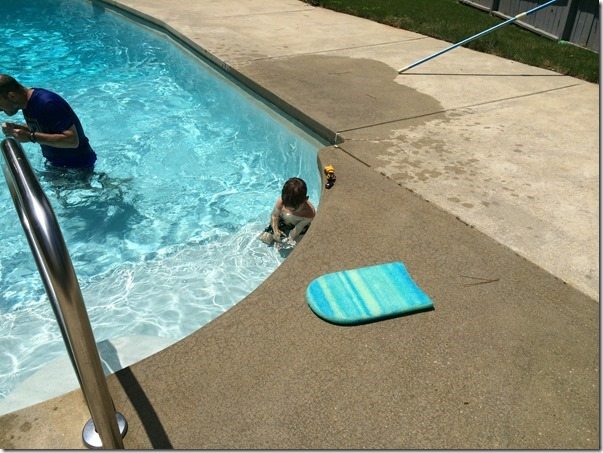 Noah learned very little, but that was the plan. I had no intention of him swimming. He has years of appropriate puddle jumper use to go. 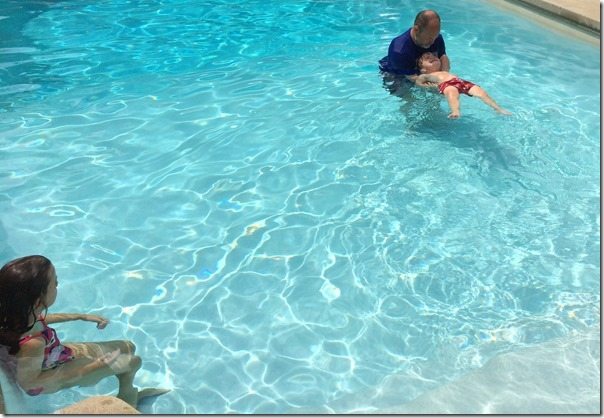 So. If I were a Disney movie, would I be characterized as a magical Fairy Godmother, who finds unique ways to help their elect discover the strength within themselves? Or would I be an Evil Stepmother, pitting my subjects against each other with narrowed eyes, a pointy nose, and an evil Raven on my shoulder?

I don’t know. But what I do know is that it worked.

So, Parents. Find your children’s weak spots. Find their sense of responsibility. Find where their conscience is most sensitive. And use that sucker against them as hard as you can.

For the Greater Good.

24 thoughts on “Parenting By Manipulation.”