I spent 31 years of my life automatically assuming that I despised cherries.

There was the cherry cough syrup I was given against my will as a young child, shaping my first impressions of cherries as The Fruit That Tastes Like Gastric Acid.

Then there was cherry-flavored candy – it didn’t matter whether it was Skittles, Starburst, Now and Laters, Pop Rocks, Bonkers or DOTS, cherry was always last in my lineup to eat.

(Right after grape, which also needs new PR when it comes to its candy-flavoring counterpart.)

(Oh – and watermelon. WORST CANDY FLAVORING IN THE WORLD.)

But. Back to cherries. Because cherries, unlike grapes and watermelon, have a catastrophic issue.

After my introduction to cough syrup and candy flavorings, I met my Grandfather’s favorite treat, Chocolate Covered Cherries. Not the chocolate covered dried fruit of today, but the chocolate-covered-moist-maraschino-cherries.

Let’s not skip over the sins of maraschino cherries themselves. According to Wikipedia, they are…

first preserved in a brine solution usually containing sulfur dioxide and calcium chloride to bleach the fruit, then soaked in a suspension of food coloring (common red food dye, FD&C Red 40), sugar syrup, and other components.

Cherry’s PR: “Let’s take a red fruit, bleach it with frighteningly named chemicals, then re-color it red! While we’re at it, we’ll add ‘other components,’ since we haven’t disfigured them enough already.”

The only redeeming value that I could find in cherries as a child (and I’ll lose a friend or two over this admission) was that my favorite candy was Brach’s Red Licorice, which is loosely supposed to be cherry-flavored. But then when Brach’s broke my heart and discontinued my best friend in candy form, my breakup with cherries was solidified.

(Although I will still eat a Twizzler now and then. But it’s not the same.)

As I entered my adolescence, I learned the more euphemistic meanings of cherries, tacky cherry-covered clothing came in style, and then a few years later, Katy Perry made cherries forever synonymous with the taste of Chapstick.

I had literally never tasted a single real, live, unaltered cherry in my entire life until the summer of 2013.

My grocery store had them out in a sample tray.

(Which is smart on their part since my generation is never going to be like, “yeah, let’s try cherries for our fruit of the week.”)

On a whim, I reached in, popped one in my mouth, and scrunched up my face, just waiting for The Nasty to hit my taste buds.

Full of flavor but without juicy explosions, sweeter than I had imagined but without a cough-syrup aftertaste, and all around delightful!

And also, who knew that half of them were shaped like adorable little hearts? 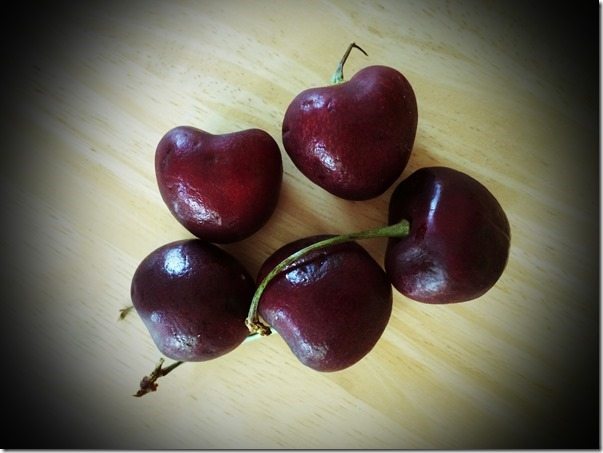 I was shocked, I tell you. And for the last year, I’ve been addicted.

This fruit had been hiding in plain sight, incorrectly linked with the seediest of flavorings, keeping fruit-lovers everywhere away from their bounty, for at least three generations.