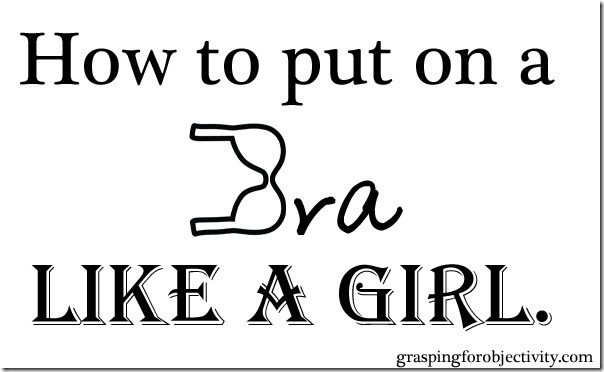 My friend Katherine writes a series called Uncomfortable Truths that is positively brilliant. I love this feature so much that I might have contributed my own not-so-comfortable facts once or twice.

In a recent installment, she discovered a fascinating bit of information about the way we go about restraining ourselves.

Katherine hooks her bra backwards (in the front) and upside down, then swings it around and places it where it should go. She assumed everyone else did it “correctly”, aka putting their arms through and hooking it in the back.

I am Katherine’s Normal – I put my arms through and hook in the back. I also assumed everyone did it “correctly,” aka like me.

However, it quickly became evident through the comments on the post that there are many more women in the world like Katherine than Katherine or I would have thought.

(Thereby nullifying her confession as an Uncomfortable Truth – she owes us all one extra next time.)

I had to know the stats. So I tackled the research project to find the truth in this pressing matter, using the highest of scientific methods: Facebook.

I received 146 responses and the data was shocking. 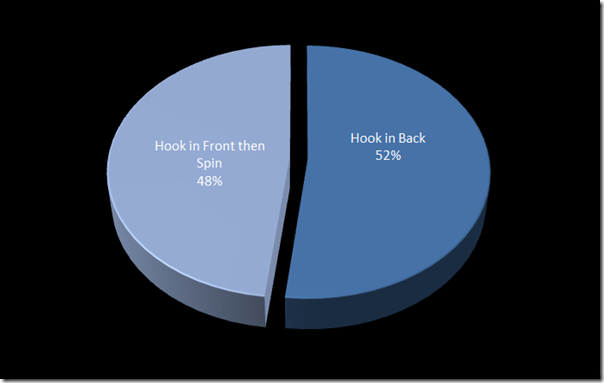 That’s right, ladies, we have been lifted and separated.

Who would have thought that we were a nation divided between those who needed to see the clasps and those who did not?

Furthermore, if you take out the one percent of Hook-In-Backers who get their husband to do the hooking, we are nearly an even split.

(Also. Whose husband is always around when they’re putting on their bras? Are they just magnetically drawn to this procedure? Do they have an app that keeps them abreast of this need? Do they linger a few extra minutes before heading to work so that they can be a part of the brocess?)

(Maybe I’m just jealous because I don’t even see my husband in the mornings. No – wait – I’m not jealous – I get to sleep in instead.)

We did, however, rack up a few jugs of outliers, as well as some specifics that must be addressed.

For instance, the number of Backwardsers were split between whether they were just backwards or backwards and upside down.

And then there were a few Hook-in-backers that hooked with it upside down, which seemed to puzzle the rest of the respondents.

(But far be it from us to be knockers of someone else’s technique.)

And although we didn’t have anyone that hooked then stepped into their bra (we all have hips that preclude such), there were people who hooked before pulling the bras over their head…and a couple that hooked at waist level then pulled it up.

Here is the complete statitstical breakdown: 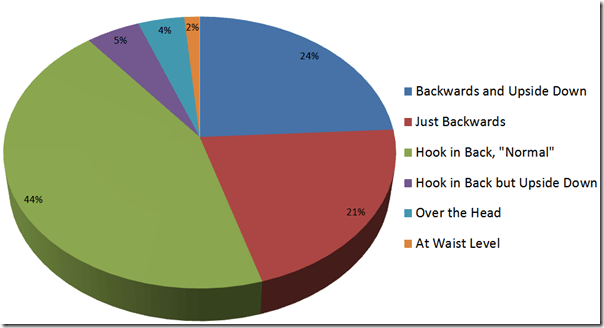 Now it must be noted that the decision on how to put on one’s bra is a grave and important one to make. Several respondents admitted to getting strained muscles or sprained wrists from using the wrong method, and a broken toe is not out of the question. Although many respondents said that they put on their bras “just like Mom taught”, make sure that your Mom taught you a method that will not maim your body.

I hope this has been enlightening. And please – weigh your girls in below.