Last week while we were at the beach, we went out to eat. I added a side salad to my dinner as I sometimes do. When it arrived, I went through my all-too-familiar Cycle of Salad Emotions.

…The ranch looks homemade and thin…happy!

…There are no telltale carrot shreds, giving away the fact that they just poured my salad from a bag. RELIEF.

…But oh. The cucumbers. The sad, sad, cucumbers. WHY the peels?? Do they WANT to ruin my night?

…Removal of Cucumbers out of protest. Maybe they’ll notice and realize their grave sins against humanity.

…But at least the Ranch is good.

I vocalized a bit of my inner dialogue to our friends across the table. And I was shocked. SHOCKED I say. To find out that my friends did not feel the same way.

They said that they were indifferent as to whether cucumber slices were peeled or not.

My mind screamed at them.

HOW IS THIS POSSIBLE?!?! HOW COULD YOU NOT CARE?? WHERE IS YOUR MORAL COMPASS?! YOU ARE PARENTING YOUNG CHILDREN AND THIS IS YOUR BELIEF SYSTEM??

My world had been shattered. Surely there weren’t really these kind of people roaming around freely. Surely they were just attempting to tear down my carefully built ideals and rip apart my soul.

It was time for another survey to restore my belief in humanity. So I asked you.

I knew you would agree with me. You would be on my side in this crucial issue. You would understand the importance of a properly peeled cucumber slice.

But instead. You were the Judas Iscariot of Salads.

Almost all one hundred and fifty of you came together and stomped on my heart. 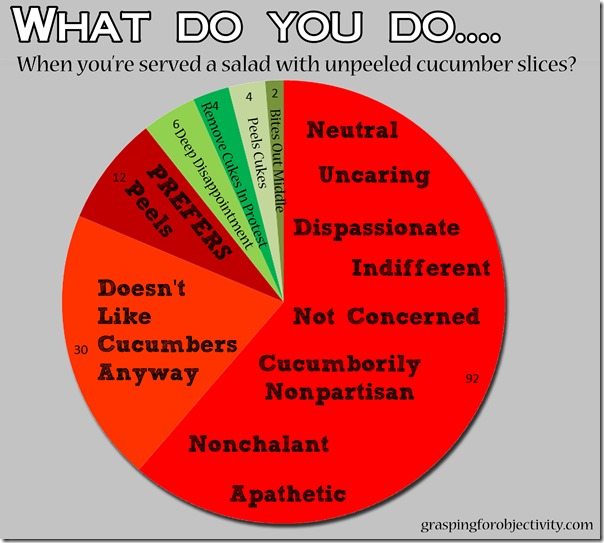 How. HOW HOW HOW could 61% of you have Cucumbic Apathy?!

I understand that it is perfectly natural for 20% of the population to dislike a certain food and even that 12 of you would statistically be clinically insane.

(Seriously. Only people in padded rooms and straight jackets while singing in a monotone voice about Muskrat Love would actually prefer cucumber peels.)

But those of you who just don’t care. You were the ones who broke me.

I had no idea that apathy had escalated so rapidly in our nation. It’s one thing not to care about politics or education or world peace.

But to not care about whether your cucumber slices are naked as God intended or not?!

WHAT is WRONG with you people?

YOU ARE TO BLAME FOR THE STATE OF OUR NATIONAL SALAD.

Because nothing will ever change as long as 61% of you don’t give a peel.

And in the meantime, heinous cucumber peels will continue to worm their way between my teeth and cut into my gums like a dull razor blade while tasting like the bitter herb of betrayal.

And I will know who to blame.