“That’s okay. Just throw it in the bushes. No – wait – why don’t you go put it on top of that ant bed you were looking at a while ago? I bet they would love it.”

After all, it was Easter Sunday. Everyone deserves a good meal, right?

That conversation happened between Chris and Ali. I came outside a few minutes later and Chris told me to go check it out – and take my macro lens.

They were definitely happy (and photogenic) ants. 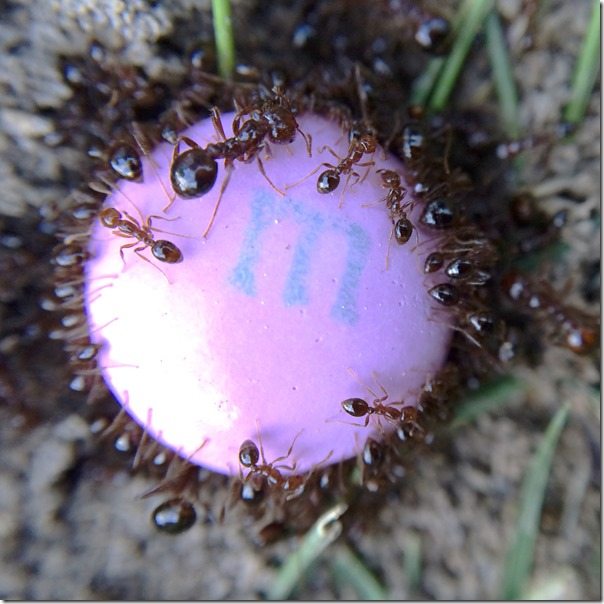 You can see the pock marks where various ants had been able to take bites of the sugar coating as the whole colony happily nibbled. Every now and then the candy would tilt and shift, as if they were about to carry it away on the backs of hundreds of tiny pall bearers.

The next day, we went back to check on our science experiment. The M&M seemed to be gone, but there were very caffeinated-looking ants giddily tromping about. With a little finger digging, though, we uncovered the M&M – although it had only an extraordinarily thin outer layer left, the chocolate was in tact. They had just buried it to save it for later.

The next Saturday, we went back to check.

And it was as if the Ant War II had occurred and we’d missed it. 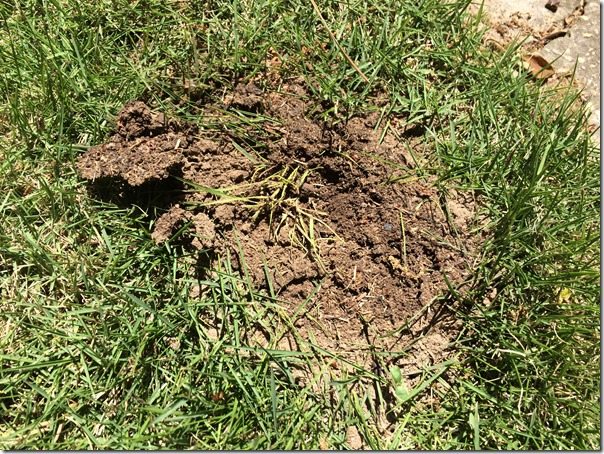 What had been a bustling ant metropolis only six days prior was now an abandoned crater.

Not a single ant could be found in that community, but there were giant red ants patrolling the wasteland, looking rather like US troops in an Afghan desert – they clearly weren’t from around there.

Had the chocolate caused a war? Had the red ants come and killed the village for what was left of the morsel? Or had it caused a civil war? Had all of the black ants been so greedy that they’d killed each other for the chocolate?

I mean I’ve been in a place where I might’ve killed for chocolate. All women understand.

Or….had the chocolate killed them?

This called for further investigation. Immediately.

I called the kids out of their happy place of running through the sprinkler and sent them inside to find more M&Ms.

We located the biggest ant bed in the yard and covered it in what we had on hand, which were mini M&Ms. 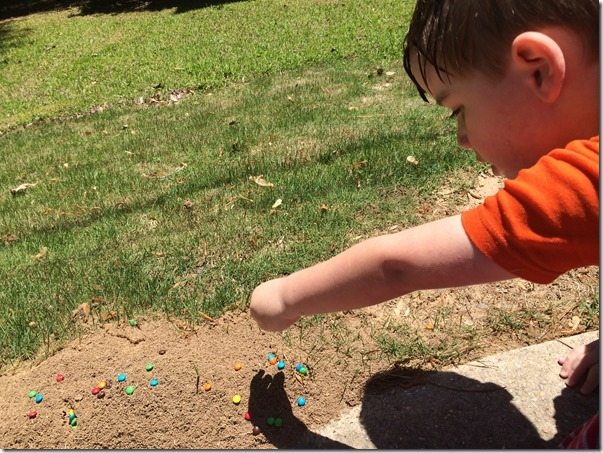 Because we’re homeschoolers. And this is what homeschoolers do. They pour perfectly good chocolate out in the yard and call it education. 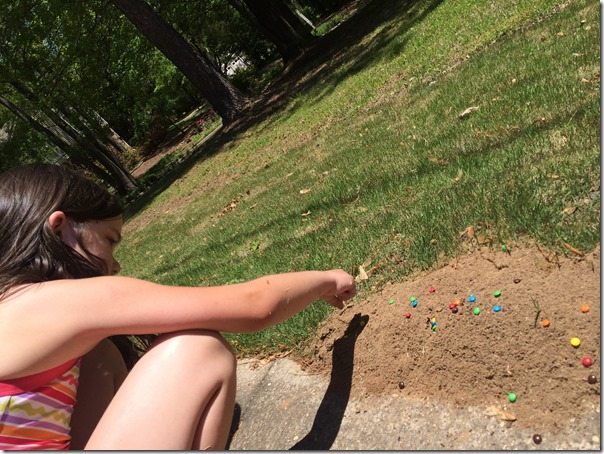 An hour later we went and checked, fully expecting each M&M to have a colony of ants around it like last time. 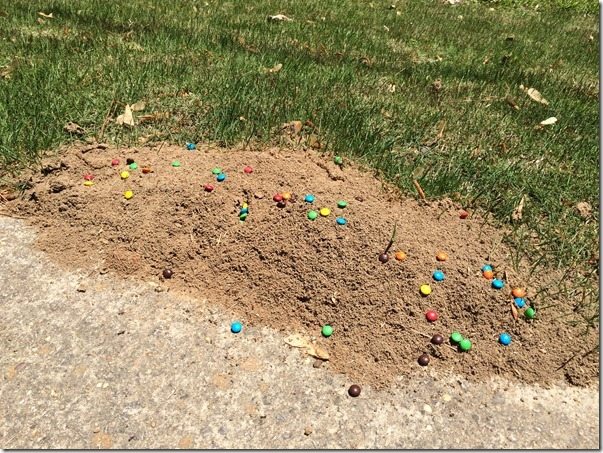 The ants were nowhere to be found! Even the ants who had been disturbed out of the bed by our chocolate air raid had returned inside.

In fact, there was only one grouping of M&Ms that had any trace of ants near them, and all of those were…curled up dead. 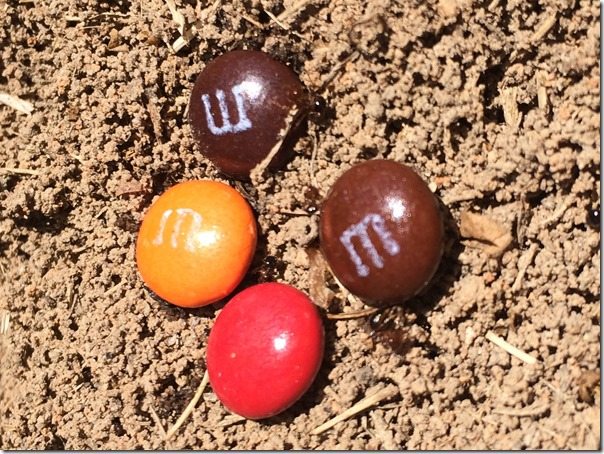 And we all know that curled up dead is one step past just regular dead.

(Only to be out-deaded by cockroaches who all somehow manage to flip themselves upside down immediately prior to death.)

(I actually saw one do it one time – he had like this fifth leg thing that extended longer than his other legs and flipped him like a burger on a griddle. That’s right, people – cockroaches have a Death Leg.)

We were more suspicious than ever that the cause of death of the other bed had been the chocolate itself. And further more, those original gluttons had somehow managed to communicate with The Big City before they died to warn them of the dangers of Brown Death – which is why none of our current ant subjects were happily eating like that original gluttonous tribe. 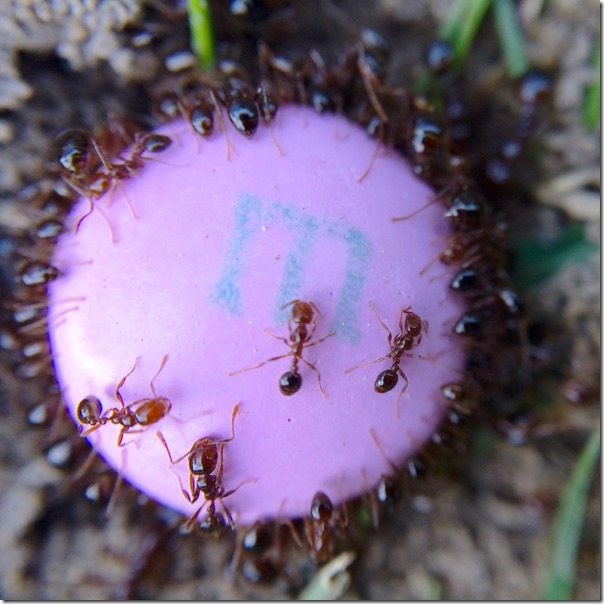 I know that I could have Googled at any point “Does chocolate kill ants?” to find out the answer to this mystery, but I purposefully didn’t – because Google has killed the Scientific Method, and I wasn’t going to let it ruin it this time.

The rain came and pushed/melted the chocolate down into the bed. We hoped that this would quicken the killing process since the ants were refusing to cooperate. So, a couple of days later, we anxiously stirred up the bed to check the progress. 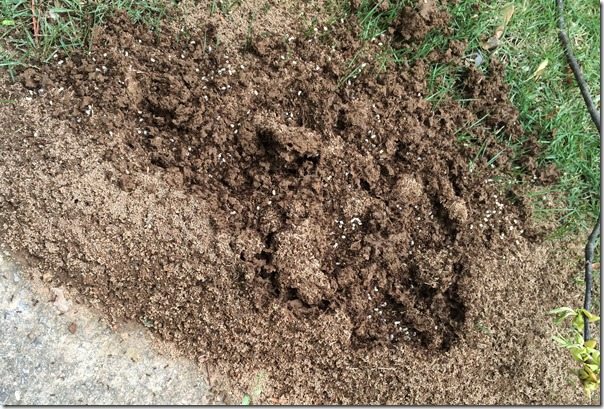 There were gazillions of ants and innumerable disgusting ant eggs. They seemed to be blissfully unaware that we’d tried to kill them by cacao.

Perhaps we were wrong.

Perhaps our other ants just caught a really bad cold and couldn’t survive a bed full of ant snot.

But on Thursday, we went back to check again – the ever important Day Six.

And were immediately overcome with gleeful emotion. 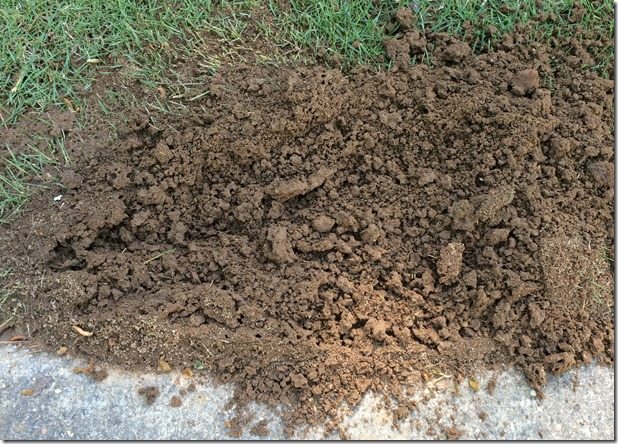 The population was decimated. There were only a few ants still wandering about, looking perplexed as if the ant rapture had occurred and they had been forsaken, with nothing else to do but look desperately for a Tim LaHaye book to tell them what would happen next.

Even the eggs were gone.

Maybe they all left because we’d stirred their bed a couple of days prior.

Or maybe a number of other factors played into the situation, thereby ruining our Scientific Method. After all, “All Other Things” are never equal.

But. For the purposes of First Grade Science, we’re calling it.

(And no. I still haven’t Googled it.)