I feel like I have done my state a disservice by not talking about American Idol this year.

After all, three of the TOP SEVEN finalists are from Alabama. They call themselves…Alabama Power. Okay that’s cheesy but my hometown music venue, WorkPlay, even got a shout-out last week!

Although I’ve enjoyed the Alabama connections and I adore the city of Slapout (the name, not the actual place – just like everyone else in Alabama, I’ve never actually visited Slapout), that’s not what has really stuck out to me this season.

I’ve always been a huge American Idol fan. Since it started, which also happened to be the first year Chris and I were married, I’ve watched all but two seasons – the first was the year Fantasia won. I’m not sure what happened that year, but I just completely missed it.

And the second was last season.

I tried – really, I did – but Mariah Carey and Nicki Minaj were the most unsavory characters ever introduced to television (seriously – they beat the Kardashians and Jersey Shore and I thought only Satan in a string bikini could do that), creating fake cat fights and diva moments in a poor attempt to draw us all in through the drama.

It was painful and I couldn’t stomach it – especially since I have a guilty soft spot for Mariah’s husband, Nick Cannon – all I could do was feel sorrow for him and his choices. I sadly bemoaned that it appeared the reign of American Idol was over – the only redeeming character left was Ryan Seacrest, who will always have a corner of my heart, sweet southern boy that he is.

But this year, when I heard the judge’s lineup, I felt it was only right to give them one more chance to fix it.

And fix it they did.

He is so charming he actually takes away some of the charmlight from Ryan – something I wasn’t prepared for.

Harry’s list of positive characteristics are, in my mind,

~ He is nice YET honest, due obviously to his southern upbringing,
~ His gorgeous eyes,
~ He cares about these kid’s messages and images, and discouraged girls from projecting sluttishness,
~ His eyes,
~ He actually knows what he’s talking about when it comes to music and gives the contestants extraordinarily useful advice in the areas of vocal technique so as to save their voices – something no judge has ever done before,
~ And did I mention his eyes?
~ (Also, he has nice lips.)

I was confused as to why I’d never found HCJ necessarily attractive in the past – especially since I’m a total sucker for Hope Floats. (I’m admitting all kinds of unpopular taste in this post, aren’t I?) And then, one night, it all became clear.

Harry seems to have had Pre-American-Idol Plastic Surgery.

For my entire life he had an awkwardly crooked chin and therefore smile, and all of a sudden now, that crookedness is completely gone.

Before – the awkward, slightly-odd HCJ (except for the notated recent picture): 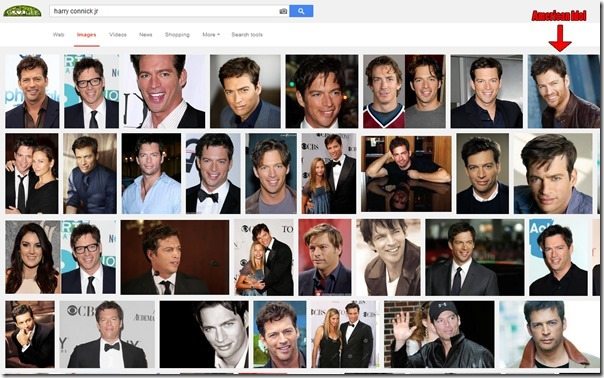 After – the new and improved HCJ: 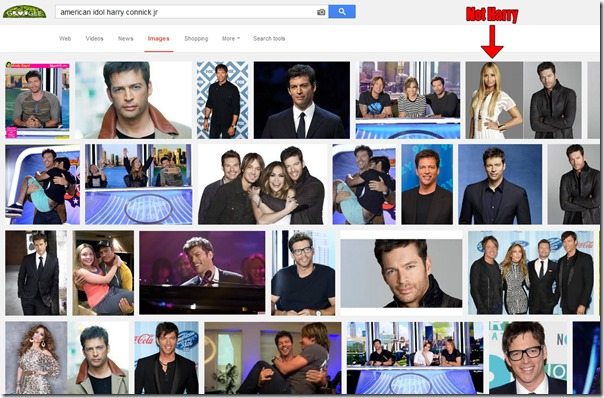 If you can’t tell in my tiny Google Images screenshots, go Google him yourself. You’ll see.

Obviously, I immediately googled “Has Harry Connick Jr had plastic surgery?” because I learned long ago to always ask The Google questions.

And oddly enough, there was nothing stating that this has occurred. I felt as if I’d decoded the Rosetta Stone, and I and I alone held this important piece of celebrity information.

How are people not talking about this?!

Have we as a society moved past talking about celebrity’s obvious facial changes?

Not that I’m complaining about his choice of Plastic Surgery. If I had the time and resources, I have a large-sized post-it note filled with things I’d like to get fixed about myself.

This is simply about my amazement at the fact that no one is talking about this.

Harry Connick Jr. has had a very recent plastic surgery.

37 thoughts on “The Man Who Singlehandedly Saved American Idol.”