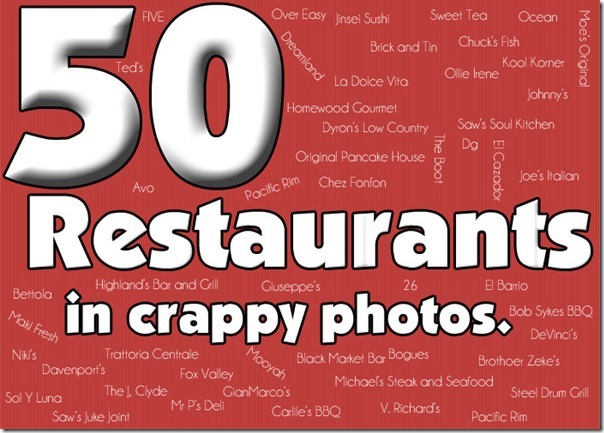 This is a blog series in which I am working my way through 50 restaurants that I’ve never been to before – mostly in Birmingham, but I break my own rules quite often. For the rest of the series, click here.

Brick & Tin is one of those super-hip, locally-sourced, downtown, oft talked-about places that is so tiny you better know when to go and not be towing kids if you desire to get a table.

I’d wanted to try it for a while, but hadn’t had the right opportunity. Finally, it came along, and I went with my friend Katherine, who is a Brick & Tin Expert/Evangelist.

(They really should pay her a stipend. In sandwiches.)

The interior is awesomely downtown. Faded ceiling tiles, bricks and piping exposed (hence the name), and a great atmosphere. 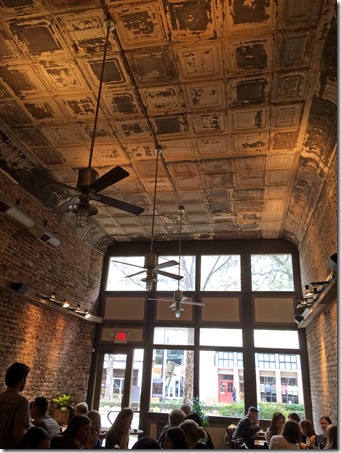 But it was crowded. 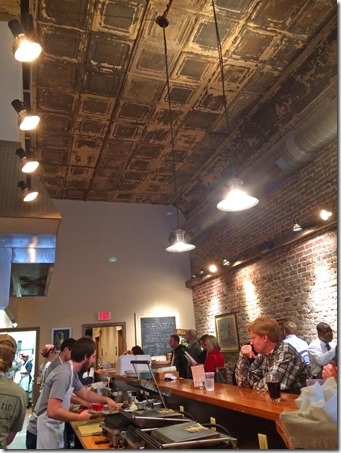 .
After ordering at the counter, we had to wait a few minutes to run to a table and claim it before someone else that might have been there longer beat us to it.

(I can’t help it if she was wearing stilettos and we weren’t. This is the type of place to which you better wear your sensible shoes.)

Being a newb, I ordered the salad. It was good and they have a great ranch dressing, but I DID NOT KNOW. 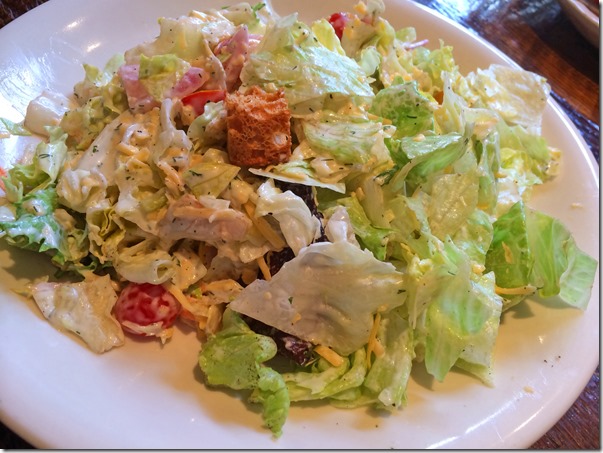 When you go to Brick & Tin, ORDER THE BRISKET SANDWICH. 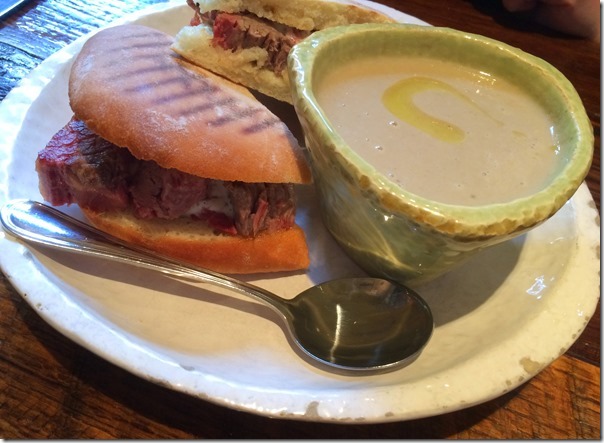 Katherine kindly cut off a portion of hers for me to try and oh my goodness. I will never think of beef the same way again.

Everything about the above sandwich made me not think I’d like it. I don’t like crusty bread, I despise eating sandwiches where I have to chew through the meat to keep the whole slab from falling out and bashing me in the chin, and I really just don’t like Paninis in general.

But it was not as it appeared.

The beef was fall-apart tender (no chewing-through required), unbelievably juicy and flavorful, and I am still craving it weeks later. And the bread was not crunchy, easy to eat, and pleasingly warm.

Katherine then treated us to chocolate bread pudding for dessert, and it was decadent. 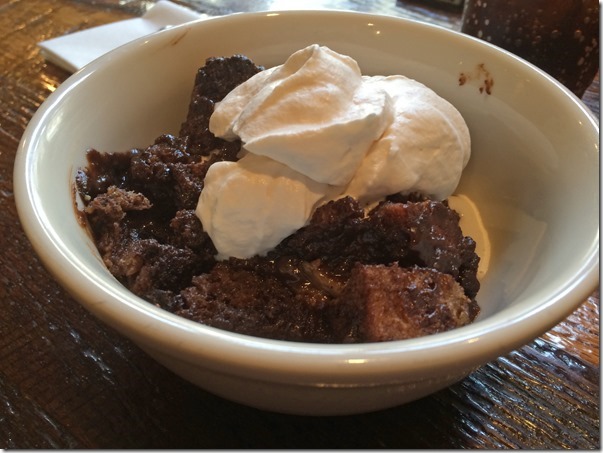 Brick & Tin just opened up a new location in Mountain Brook Village as well, so I’m hoping that helps out with the traffic flow issue, because I will be back to one or the other very soon.

25. The Southern – Located in the new Uptown District, I tried the The Southern at the fault of Brick & Tin. I had planned on meeting another friend, Jamie, at Brick & Tin for dinner (just a week after I’d eaten with Katherine – I told you I was craving that sandwich), but alas, despite their Facebook Page, they were not open on Friday night.

So I frantically decided that The Southern would be our alternate destination. 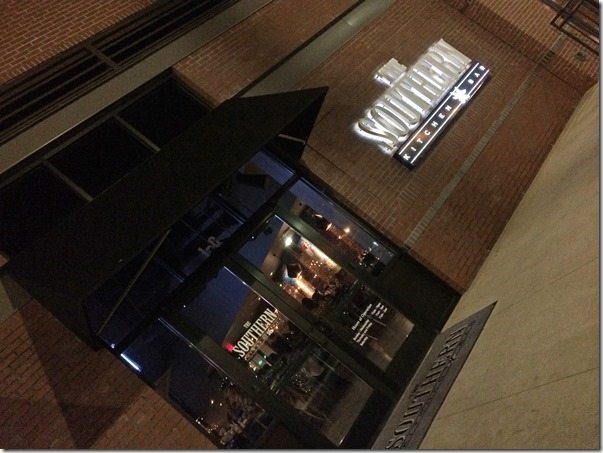 I actually did have the kids with me that evening and I was afraid it’d be too nice of a place for children, but the restaurant was loud enough that no one noticed my kids – even when Noah was laying on the stair leading to our booth.

Oh yes – the stairs. The booths and tables were extraordinarily high – even after we walked up the stair to get to our booth, the table was boob-height on Jamie and I, and her feet didn’t reach the ground. So needless to say, my kids were chin-height with the table, hence, perhaps, Noah’s giving up and lying on the stair.

But the food was worth their discomfort, apparently, as neither of them left a crumb.

I ordered the Rustic Salmon at the waitress’ recommendation, and subbed the Black-Eyed Pea Succotash for the whole roasted carrots. 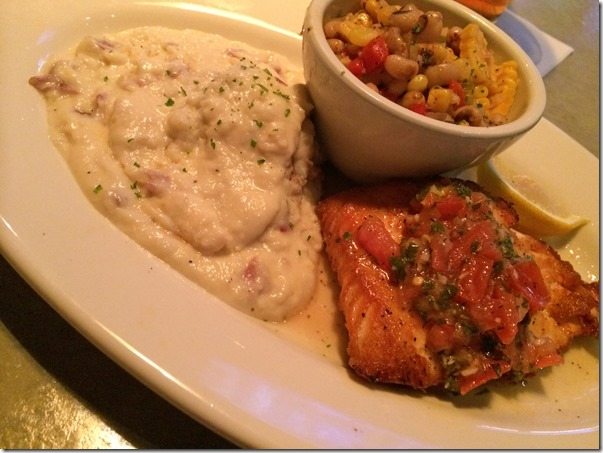 The Salmon was flaky and so inviting that Ali stole half of it, the Mashed Potatoes were perhaps the heaviest-on-the-sour-cream-potatoes that I’ve ever had (which obviously made them irresistible), and the succotash was okay – perhaps a bit too hard on the vinegar for my taste.

(And, for the record, I stole some of the kid’s french fries, and they were quite sophisticated.)

We shared the Banana Pudding Crème Brulee for dessert, and it was perfect – a crispy shell on top, and creamy smooth pudding underneath. I didn’t detect any Nilla Wafers, though, for your banana pudding purists. 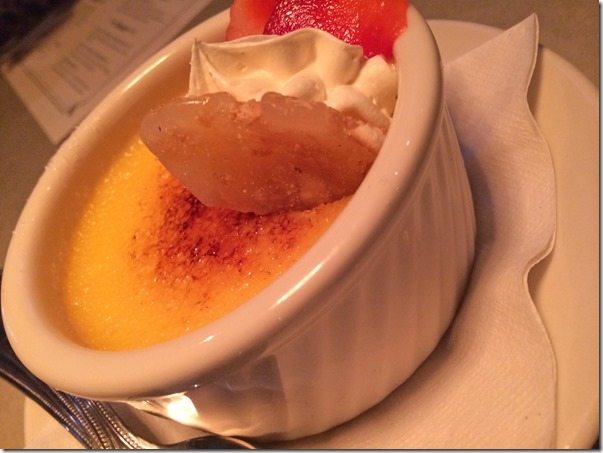 Fortunately for us, the kids didn’t really go for it (too fancy and all), so Jamie and I were able to fully enjoy the treat.

26. Dixie Fish Co. – I made the erroneous assumption that Dixie Fish Co. was a chain, based on its décor, signage, and menu. But they actually aren’t – there’s only one, on 280, in the former location of Bahama Breeze.

I took the kids and met yet another friend, Amanda, there a month or so ago.

(Yes, Chris missed this entire episode of 50 Restaurants. He may lodge a complaint.)

I was a bit surprised at the high prices (especially the kid’s plates which were $6.50 – $7.50), but we were willing to experiment.

I ordered the Fried Grouper Sandwich with a side of locally sourced McEwen and Sons Grits. 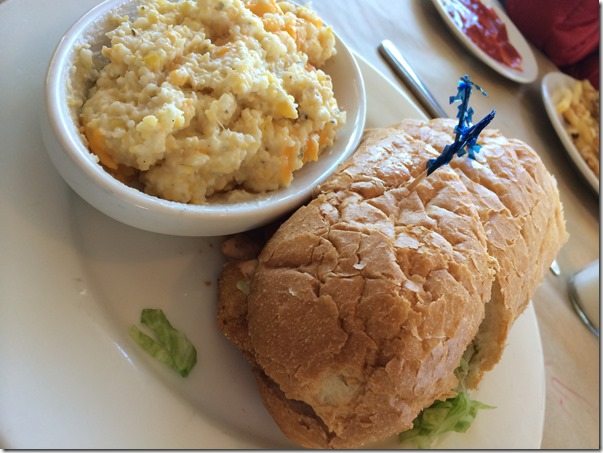 The grits were cheesy and thick and worth every penny. And, although the fish was tasty, it was hard to detect due to the proportion issues with the sandwich. 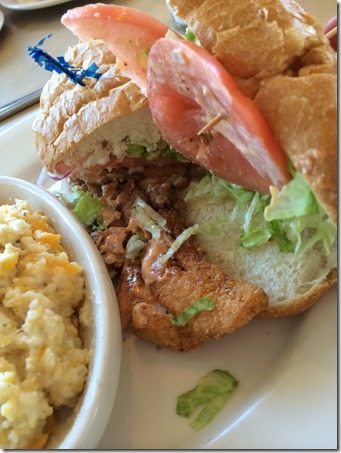 I ordered Noah Chicken and Fries (since that’s the only food he acknowledges) and Ali catfish and fries. I tasted her catfish and it was clearly what they’re best at – so if I go back, I will definitely get a catfish platter of some sort.

When it gets warm outside, we enjoy going to Cantina in Pepper Place downtown. Although it’s fine inside too, the outdoor seating is delightful.

My favorite thing to order at Cantina is what is called the “Grilled Salmon Filet”, but the name is a massive understatement. 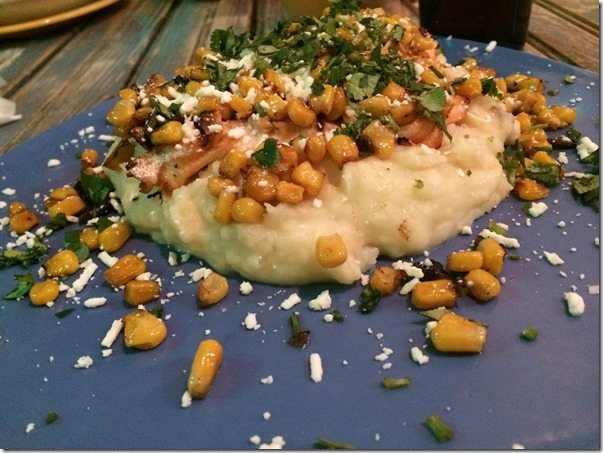 Way more deluxe than its $10.25 price tag suggests, the Grilled Salmon Filet consists of a bed of exquisitely crafted mashed potatoes topped with grilled salmon topped with poblano and corn topped with a heavy dose of cilantro topped with “real” Mexican cheese.

This is a dish that you absolutely don’t want to deconstruct. It seems like a strange combination at first, but together, those ingredients create something magical.

And the winner of this round of 50 Restaurants in Crappy Photos is… Brick & Tin.

And next time, I’ll order the Brisket

7 thoughts on “50 Restaurants in Crappy Photos: Round Seven.”