Sometimes you get to see it after the fact, like this beautiful graffiti on a Church bathroom door… 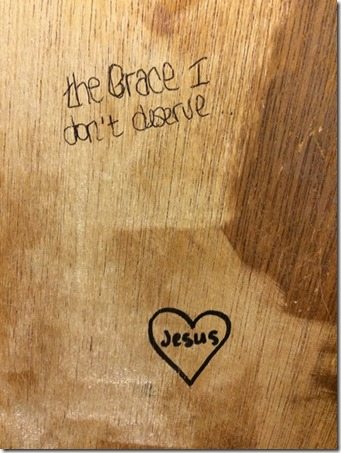 …even for defacing Church Property.

And sometimes you are blessed enough to live through it – like the time, almost exactly a year ago, when I was in a Tampa restaurant bathroom stall while Chris and I were on our anniversary trip.

It was Tampa that finally helped me understand why Florida is considered the retirement destination of the world. I’d always been to North Florida, near the border of Alabama and Georgia, where it is full of gazoodles of families with small children, all watching the Perpetually Spring Breaking Girls Gone Wild walk up and down the beach while digging out their bikini wedgies every three steps. So I was left to wonder how Florida managed to hide all the retirement villages I’d heard so much about.

But Tampa – Tampa is a different Florida. I’m pretty sure their average resident age is 88 and a half. Which really cuts down on the beachfront wedgie picking ratio.

During one of our many delicious meals, we found ourselves in a restaurant that was wildly popular on the retirement scene. If they knew how to use UrbanSpoon on that newfangled smart phone their son-in-law insisted they have, they’d give it a rating of at least five denture creams. And maybe two hemorrhoid salves to boot.

I wandered to the Ladies’ Room. But before I continue, I must make a confession – at times, I quickly check my email while on the toilet – it only takes a couple of extra seconds, and I’m conscientious about being sanitary – I promise.

So I was checking my email.

The bathroom door opened and a retiree creaked in. I’m not precisely sure how I could tell that she was at least 95 – whether it was that she smelled like my Great-Grandmother’s kitchen or that her bionic hips were squeaking like the Tin Man in a Rain Forest Café.

She stepped into the other stall and heaved a great sigh and a couple small groans as she sat down.

I was ready to head back out to dinner, so I turned off my phone.

But you know that horrifically annoying camera-like click that an iPhone is defaulted to make when you turn it off?

She heard it too. And wasn’t exactly familiar with the meaning of the sound.

So she declared loudly, “I don’t know WHAT people do in here these days.”

As soon as I got back to our booth, I figured out how to disable that sound. While ducking for the ten minutes it took her to walk by.

Last night, Ali had her very own “Stuff Happens in Public Restrooms” moment.

We walked into a two-stall Ladies’ Room – an old one, the kind with the black lids on the white toilets and the rusty doors and a half-inch-buildup of grime on top of the tile grout – you know, the ones you wash your hands twice after you go. Ali was the reason for our visit, so Noah and I stood in the…commodal common area, for lack of a better term, as Ali entered the stall.

But before she could close the door and commence her business, an unusually round apple bounced underneath the wall, across the floor of Ali’s stall, and landed, perfectly leaning up against her toilet.

The inhabitor of stall-next-door would clearly dominate in a game of horseshoes.

All three of us watched the apple’s grand entrance, but Ali kept staring at it, then looked up at me.

Captain Obvious. But a valid question.

I hoped stall-next-door would convey her wishes as to my daughter’s action with her fruit, but there was silence.

“Well…I guess you should pass it back under the stall, since that’s where it came from.”

The silence next door ceased not.

She picked up the apple and stretched her arm under the stall, where a silent hand reached back and took it.

Then at long last, she spoke. In a muffled voice. “Guess I’m gonna have to wash that.”

23 thoughts on “The Bathroom Chronicles.”