An ongoing investigation has unraveled a ring of high school students who caused last week’s Snowpocalypse in Birmingham, Alabama. 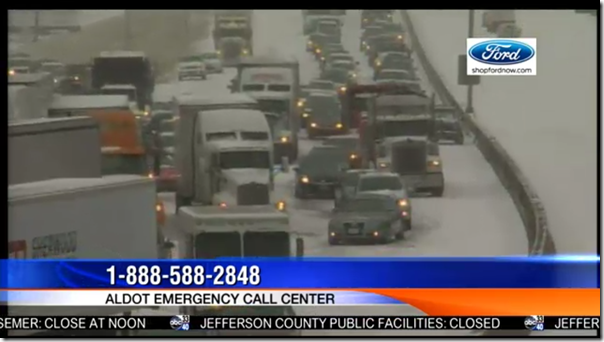 According to captured SnapChat messages (that’s right, children, your data isn’t safe – not even there), thousands of area teenagers banded together to compound a liquid road treatment that immediately turns snow into ice, which puzzled meteorologists throughout the state.

“We do not know why this small amount of snow caused such difficulties on the roadways,” James Spann states on his blog.

The road treatment, undetectable to the human eye and extraordinarily effective, was the cause of hundreds of wrecks, thousands of abandoned vehicles, over ten thousand schoolchildren being stranded at school overnight, and mass hysteria throughout Alabama and Georgia metropolitan areas. Although the exact ingredients of this concoction are not known, investigators have discovered that the original batch was created in a student’s aunt’s boyfriend’s meth lab in Walker County.

The ring’s purpose, however, was not the chaos of last week – that was merely a necessary byproduct of the conspiracy.

“We knew that if we could create a weather event that caused crippling confusion to our state, we would reap the benefits for the rest of the winter,” admits one student that wishes to remain anonymous.

And, as was proven today, their plan has worked.

Despite repeated Meteorological assurances and with just the barest possibility of snow flurries, dozens of schools opted to close early, citing last week’s pandemonium as the reason for their over cautiousness. Even Uncle Joe’s Tot Locker emptied their lockers into the back alley at noon.

“We cannot afford to put our students at danger, and as we saw last week, our Alabama winters wield great power over all of our ongoing well-being,” states the Tuscaloosa County School Superintendent.

“We just wanted to get started on our Breaking Bad marathon early,” explained Uncle Joe.

This overreaction to any and all potential winter weather is expected to recur at least ten more times in February and March, and then most likely one more time for that freak April snowstorm that never really pans out.

It was the mass amounts of euphoric celebration from the student ring that ultimately revealed their plot. Instagram selfies with the clear sky, Vines of school books being catapulted into the air, and the #WeKilledSchool hashtag on Twitter. Once the pieces started fitting together, all of the SnapChat plotting was easily captured with the help of the Police Chief Shaggy’s eleven year old daughter Scooby, who happened to be hanging around the station since schools were closed.

The actual size of the student ring is yet to be discovered, but it is clear that students were involved as far west as Tuscaloosa and as far east as Atlanta. No arrests have been made.

When asked what disciplinary actions would take place for these students within the schools, Walker High School’s Superintendent said, “they will each get an A+ in science.”

Until the remnants of the road conditioning substance is found, police are advising meth users to carefully examine their purchases to prevent a mix-up.