November is a costly month for our family.

In 2012, on the fifth day of the ill-fated eleventh month, Ali had a slight bathroom flood. That created 184 days of construction, renovations, and water damage mitigation.

In 2013, on the seventeenth day of the eleventh month, a mutantly giant bat invaded my son’s room, alerting us to the fact that he had a vast extended family living in our attic. Thankfully, this led to a mere 30 days of chaos.

I told the story here, but really, Ali portrayed and illustrated it in her diary much better than I.

Here were her pictures that went with her entries on Day One and Day Two of Bat Discovery. She wanted to make sure I pointed out the highly literary expressional dichotomy between the two scenes: 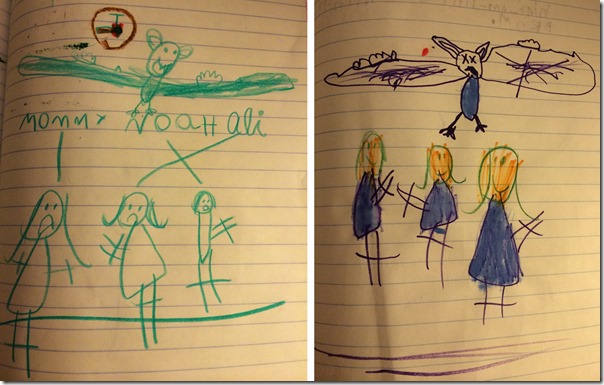 I’m sure she’ll get angry letters from PETA supporters over this, but she is not concerned about political correctness – only about properly documenting her life.

And I can vouch that this portrayal is proper.

Her narrative is as follows: 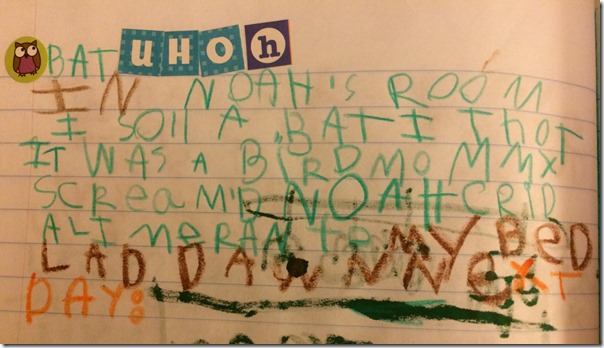 Bat uh oh
In Noah’s room
I soll a bat
I thot it was a bird
Mommy scream’d
Noah crid
Ali (me) ran to my bed
lad dawn
Next Day: 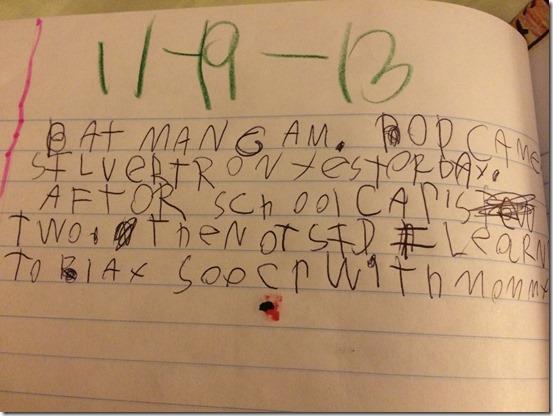 Clearly, she moved on quickly to other interests after Enemy Number One had been properly delivered to the authorities.

And this simplicity of understanding is why we’re all shocked when we become adults and realize how complicated life actually is. Because documented below is the 20 step process you will take if you ever find a bat in your home.

1. Capture the bat. If anyone was exposed to the bat, this is the most important step of the whole process. If you do not capture the bat and prove that he isn’t rabid, the government WILL hold you down and force you to get painful, recurring, and extraordinarily expensive (after insurance I heard it cost one family $6,500) rabies shots that have untold numbers of possible side effects including death and/or lifelong misery.

WHATEVER ELSE YOU DO IN YOUR LIFE, CAPTURE THE DANG BAT.

2. Read the Internet. Realize how rabies-ridden bats are and how seriously your local government takes any bat-to-human exposure. Ramp up your already boiling panic by 400%. However, try to avoid reading about bat bugs. 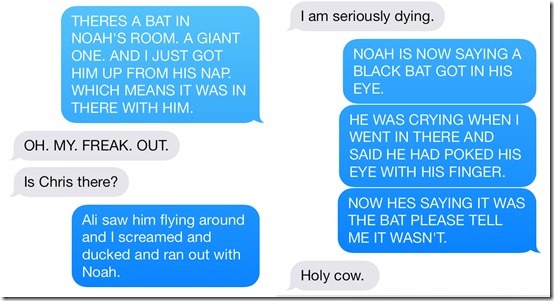 4. Deliver the bat to governmental authorities for testing. If you call the rabies hotline on a Sunday night, they will instruct you to refrigerate the bat until morning. Do not feel guilty about said chilling – your fridge is probably warmer than your attic.

However, when said chilled bat is delivered to the testing lab the next day by your parents (because you had to stay home to deal with step six,) the same Governmental Authorities may have a huge sign saying “WE DO NOT ACCEPT LIVE ANIMALS.”

In this case, your father might pull out his pocket knife (the same one he uses to clean his toenails) and offer to step outside and expedite the process. If this happens, the Government will change their procedure and accept the live animal.

5. Be prepared to be on Big Brother’s Watch List. They WILL call you daily to make sure that you’re not out biting people and spreading disease. They WILL sound angry, suspicious, and distrustful with each of those phone calls, threatening Child Services with their tone, as if you were the inventor of rabies yourself.

6. Frantically call your local bat removal company. Beg them to come out and check your attic for family members as soon as possible.

7. Try not to faint when Batman shows you a video of your attic eaves, complete with one-foot-high guano drifts, other bat family members napping in the crevices, and a report that there are countless bats calling your attic home.

8. Agree to pay Batman thirteen-freakin’-hundred dollars to seal up all of your attic cracks, put in a one-way exit to encourage the bats to find other housing, and guarantee no critters for one year.

When Batman hands you the quote and you sign it immediately, he might ask, “Don’t you need to check with your husband before you agree to this?” If he does, DON’T sic an internet-full of Feminists on him. DO tell him that you pay the bills, and that your husband is willing to do anything and everything including sign dancing and/or being Santa at the mall to rid his house of bats.

9. Warn your neighbors that one of them will be the lucky recipient of a displaced mafia of bats.

10. Cheer when the Governmental Authorities call and say that the bat was rabies-free.

11. Wait a week for Batman to actually start his work – after all, the world is choking with bats. Because they’re a protected species and all.

12. In the meantime, stuff towels under the doors that lead to attic access through which the escaped bat traveled. Beg Batman for guarantees that they cannot get into the house any other way.

14. Endure an entire day of Batman banging on the outside of your house, sealing up all of your gutters and eaves.

15. Pray for warm days so that the bats will want to go out on the town and then cry giant BatSobs when they realize they can’t get back to their home.

16. Deal with your son announcing at your Thanksgiving dinner for sixteen people,

Everyone turns and gets quiet…

“We have bats in our attic.”

17. Wait four weeks to ensure that the bats have had the proper amount of time to make their exit.

18. Invite Batman back out to remove the one-way exit, check for lingerers, and clean up the guano.

This will take hours of vacuuming, scraping, and pick-axing, but the results will make you think that your attic is the most beautiful place on earth. 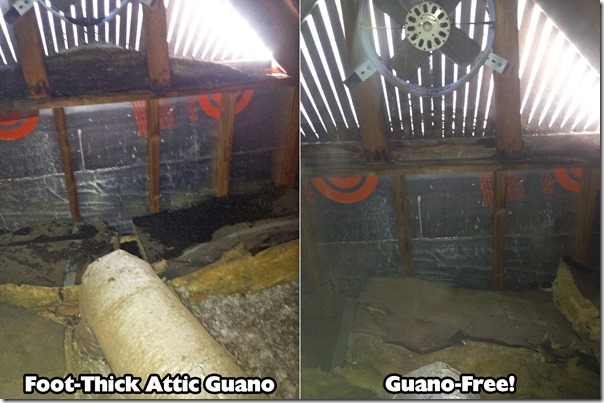 [Especially notice the poop drifts under the fan. And die a little inside.]

20. Celebrate your Guano-Free / Bat-Free status that very night by taking the children to Zoolight Safari to see Christmas lights.

Where they will find these photo op boards. 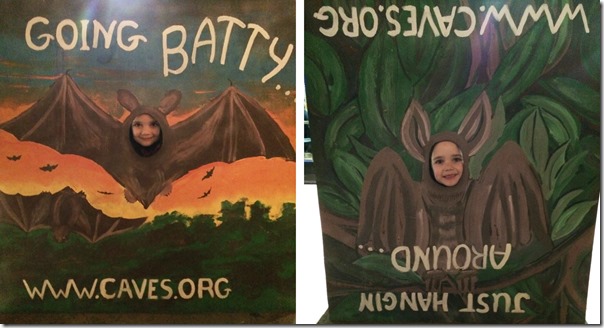 They’re haunting us. I just know it.