“Pick something from Disney,” Chris said. “It’ll be a safe choice.”

I was desperately thumbing through NetFlix, looking for something, anything to entertain our children for the last hour before bedtime on the worst parenting day of our lives.

Chris and I had both woken up with the stomach virus Saturday morning. We were incapacitated, aching, nauseated, floating in and out of consciousness and the bathroom, and giving the bacteria in our septic tank an entire day of very generous Christmas presents.

Our children, however, were fine. Earlier in the week they’d both had much milder symptoms – Ali had a day of tummy-aches and Noah had a day of Inferi-infested Lake Diapers. But neither were affected like us, and both were now at 100% energy levels. Because clearly this virus was targeted at parents.

I could have picked any number of Christmas specials that night, even after Chris suggested I go with Disney – they have as many Christmas movies as Amy Grant does Christmas Albums. But as the fates allowed, I randomly chose “Mickey’s Once Upon a Christmas” right before I passed out again. 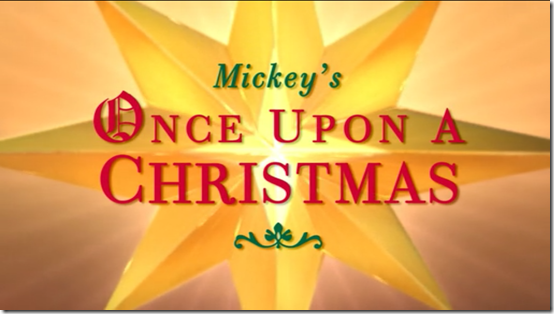 It was a trio of Christmas stories, and the children were mesmerized as they ate their Pizza – perhaps the first real food offered to them that day.

The first story was a charming one about Huey, Dewey, and Louie and a wish that every day could be Christmas day. After a few dozen repeats of the same day, they grew tired of their Great-Aunt’s kisses, became foie-gras-ready from eating Christmas dinner every day, and bored with opening the same presents. 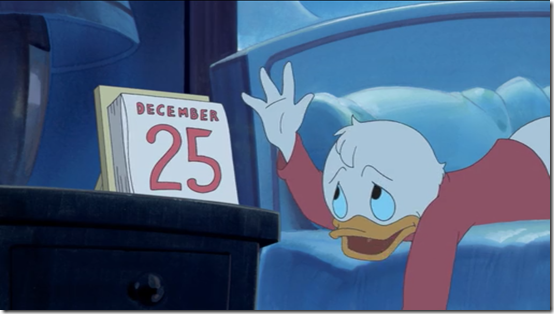 A nice, timely moral – every day can’t be Christmas, kiddies. Especially when your parents are having their guts tilled with John Deere Industrial Strength Machinery.

But then. The next story.

We should have known it would be a train wreck because it was about Goofy being a FATHER. 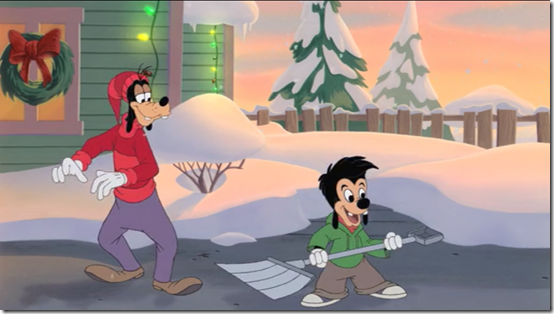 Who allowed that to happen?

I feel like there must have been some “taking advantage” happening in that situation. No way that Goofy knows how babies are made.

Anyway. Goofy is a single Dad (I told you – she used him and left) and has this son named Max who is clearly more intelligent than him (as if there were another option.) 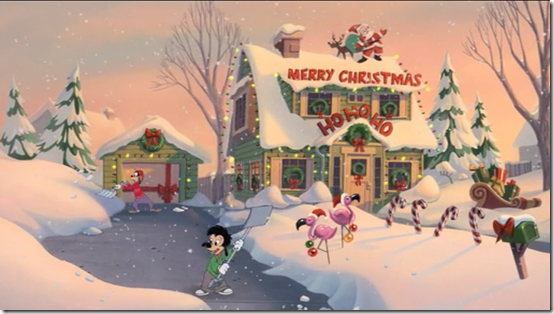 Their next door neighbor, the ever-villanous Pete, starts out the movie by ridiculing Goofy AND Max for believing in Santa. 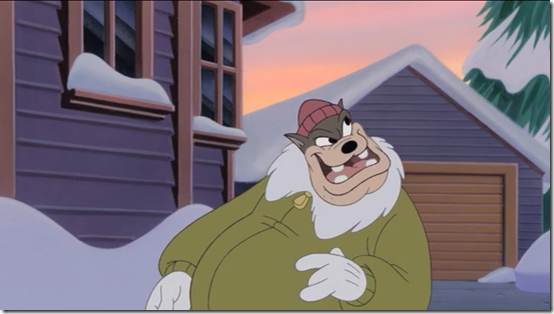 Chris and I looked at each other.

We had chosen not to watch Elf with the children this year because we didn’t want to answer questions! After all, lying to the children doesn’t come naturally to us – and we had no desire to play Lie Jenga about Santa. And yet, here was a Disney cartoon, being even more direct than Elf?!

Pete goes on to imply that Goofy is mentally impaired, and that’s the reason why he believes in Santa, and poor Max, stuck with such a stupid Dad – of course he’d believe too. 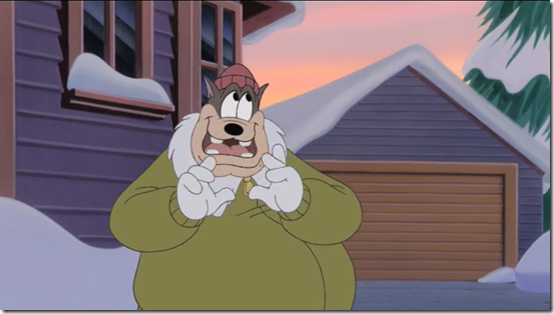 PETE JUST INFORMED OUR CHILDREN THAT BELIEVING IN SANTA IS FOR THE MENTALLY CHALLENGED.

We laid there – sick, horrified, and wondering what to do.

“Max – think about it. An old guy, in a red suit, cruisin’ the entire world in one night, usin’ reindeer that would fly – why it’s practically impossible!!”

Our children were entranced and silent and not running circles around us for the first time that day, so we let it go.

And after all, if we turned it off at this point, it’d be more suspicious. So what is a parent to do? Surely. SURELY. SUUUUUUUUUUURELY Disney would redeem this nightmare of a toon.

Max pulls out his dictionary, pondering these things in his heart, then finds Goofy and shares all of the logical reasons that Santa can’t possibly be real.

“That means Santa would have to make like…800 visits a second! NOT including bathroom breaks…”

“And…how can a reindeer fly?”

I HATE YOU FOREVER EVIL DISNEY!!!!! 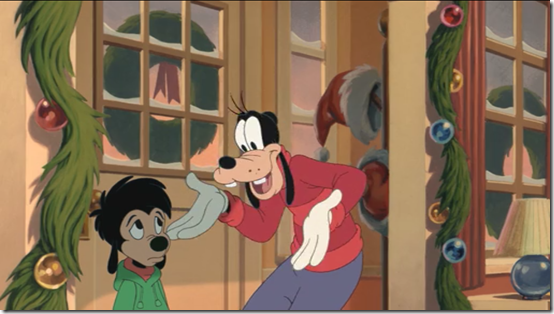 A full day of parenting with the stomach virus can make one very profane, so I will leave it up to you to imagine what Chris and were mouthing back and forth as our children sat underneath our television set, soaking this pile of feces in.

Meanwhile, Goofy continues to make himself look stupider and stupider, playing an exponential, magnified version of the stereotypical TV parent.

Then Max starts telling other kids that he doubts Santa exists.

“But…have you actually ever SEEN Santa??”

So Goofy dresses up as Santa to try and convince Max that Santa does exist.

“I am SO glad you came! I almost didn’t believe in you anymore! But now everything is okay.”

Until Goofy’s beard falls off.

Max is mad. Nearly as mad as Chris and I are. All we wanted was one last hour. ONE STUPID HOUR.

If Disney Junior is where the magic begins, then Disney Christmas Specials must be where it ends.

Max and Goofy get into a large fight about whether Santa is real. Goofy camps out on the roof, trying to snap a picture of Santa to prove it to Max. 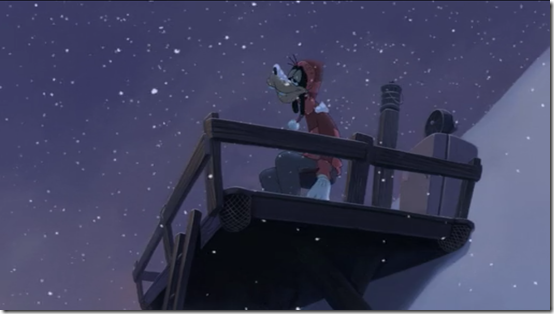 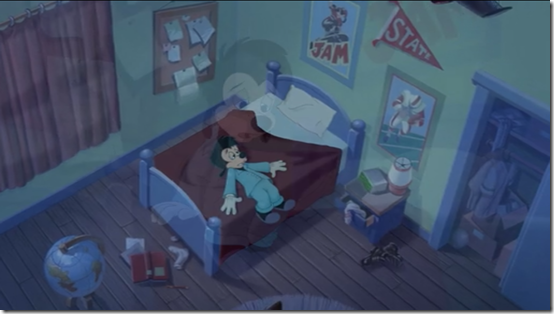 At 4:39, Max checks in on his Dad again, ending in an angry rant. “Why doesn’t he just GROW UP and face the facts?” 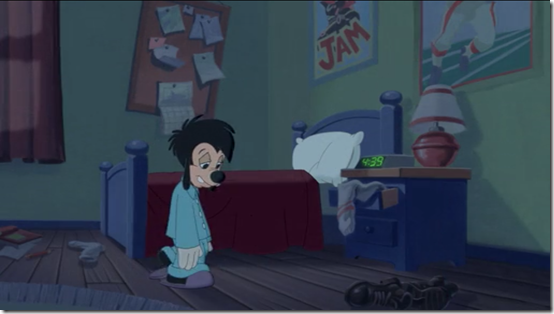 Goofy even carves “DON’T FORGET MAX” in the snow, desperately and sadly trying to conjure Santa. 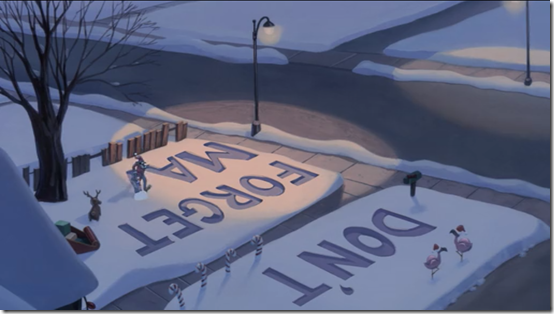 AND HE DOESN’T COME.

WHAT FRESH DISNEY HELL HAVE WE FOUND OURSELVES IN?!?

Then, in a shocking lack of continuity, it’s 3 am again. Goofy is yelling. 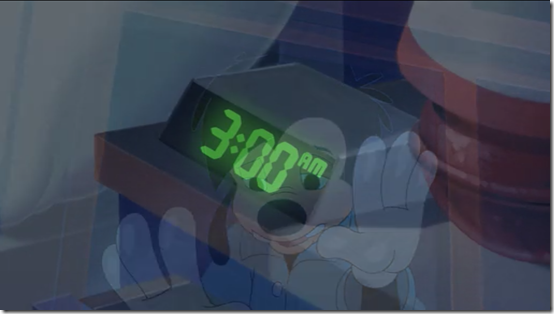 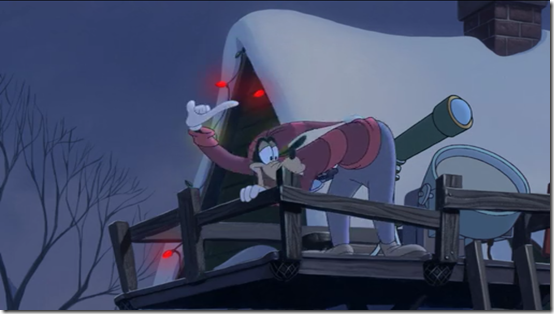 Chris and I regain hope, thinking this is the moment Disney will redeem themselves for this crapload of a cartoon. 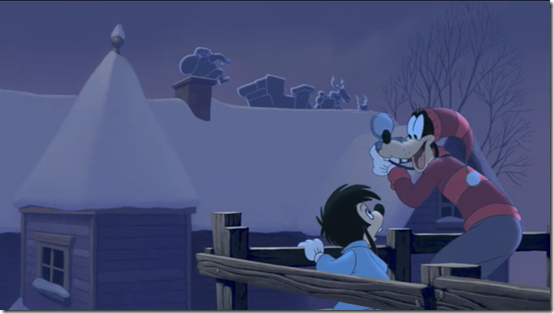 Goofy goes to snap a picture – and then floodlights hit Santa. Or not. It’s a robber going down someone’s chimney. 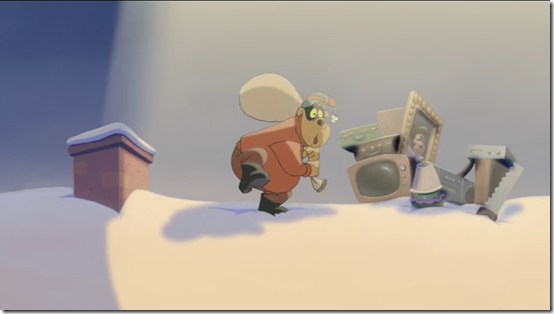 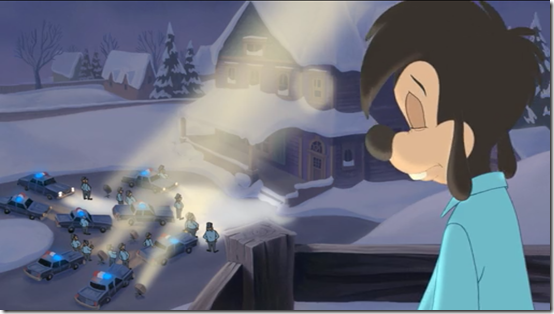 Goofy falls off the roof and it looks like accidental death will join robbery on the front page of the Christmas Day Gazette. 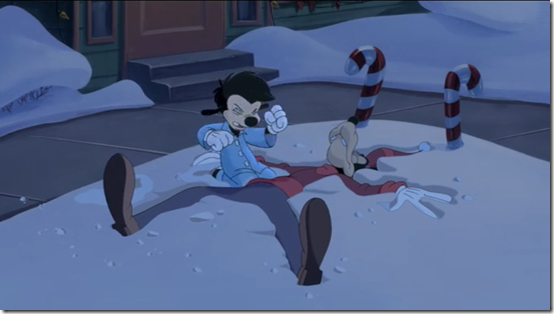 He finally sits up. “You were right about everything, Max.”

At this point, Chris is ready to storm the headquarters of Disney and provide them all with the gift that keeps on giving – a nice crystal bowl full of bodily fluids containing our special concoction of germs.

“Hey Dad. It’s OKAY! Santa didn’t show. No biggie! Since he’s not coming, at least we can eat all his cookies!” 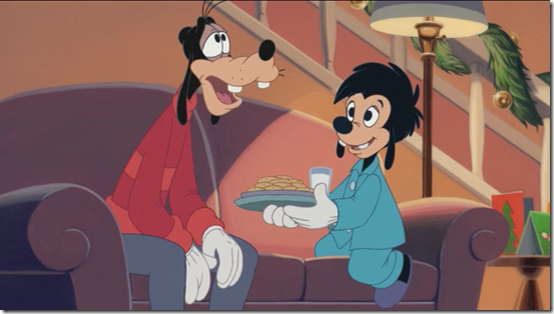 Max tries to fake Goofy out by dressing up like Santa, tricking the stupid Dad, and of course then his costume falls off too, dejecting Goofy once again.

“I just wanted to make you happy, Dad.”

THEN FINALLY FREAKIN’ FINALLY AFTER THEY’VE REPEATEDLY TRIED TO DASH ALL OF OUR CHILDREN’S HOPES AND DREAMS, Santa comes.

And no one’s heart grew three sizes toward Disney that day.

Epilogue: Thankfully, the kids haven’t asked questions so far. And I do still love Disney. Half my kid’s presents are Disney-Character-related and we’ll probably go see Frozen sometime next week. But if I could have a Christmas Shoes moment and get just one wish, it would be that this Christmas Special be burned. Repeatedly. Well okay – after I rid the world of the stomach virus.

24 thoughts on “How The Disney Stole Christmas.”